Today, the cultivation of cherries in summer cottages is less and less, cherries have come to replace them, they are easy to care for, not squeamish, and do not lose their attractive appearance. However, at the moment, a fairly large number of new interesting cherry varieties have been bred, more than one hundred and fifty. One of these is the Black large cherry variety. Cherry Black large has a large number of advantages, but there are also disadvantages, but this does not interfere with planting a crop even on your site. This cherry has the largest fruits, with high taste.

The spread of the Black Large cherry variety began in the year two thousand in the North Caucasus. They also zoned into the Volgograd, Voronezh, Rostov, Belgorod regions. Rarely, but can be found on the territory of Belarus and Ukraine. Also in these areas are planted such varieties as: "In memory of Vavilov», «Novella», «Hope», «Morozovka». 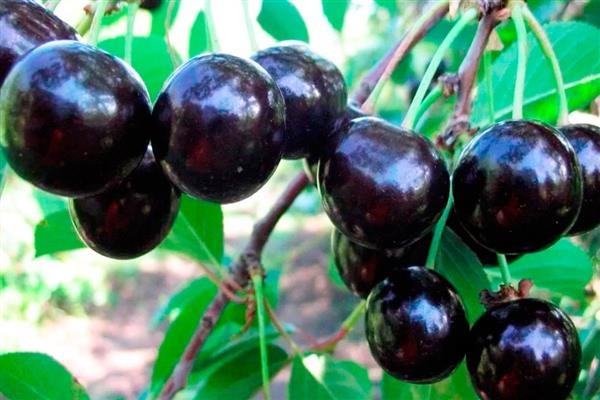 Cherry Black large does not have independent fruiting, therefore it is necessary to plant additional varieties of pollinators of cherries Black large, for example, such as: "Spectacular", "Kent"," Turgenevka ","Griot Ostheim"," Zhukovskaya ","Rossoshanskaya black».

Cherry variety Black large gives its first fruits very early, already in the third or fourth year after planting. The variety belongs to the mid-early with a late inflorescence period. In the south, the fruits ripen in early July, in the middle lane closer to mid-summer, early August.

The harvest of large black cherries gives a large enough, from one tree you can collect from fifteen to twenty-five kilograms of berries. Such varieties also yield a large yield: "Uralskaya Rubinovaya", "Memory of Yenikeev", "Turgenevka", "Podbelskaya".

Cherry variety Black large lives from fifteen to seventeen years, not so many. The older the tree, the lower the yield.

Cherry Black large tolerates the cold season, is resistant to temperatures below thirty-four degrees. The tree will not suffer in any way during this period. 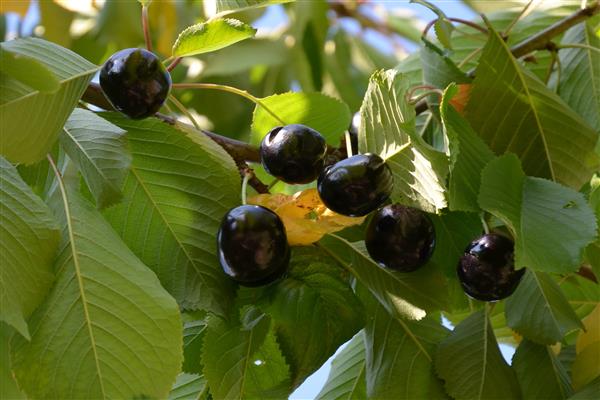 The place for planting cherries of the Black Large variety must be chosen light, protected from gusty winds. It is worth planting only in the spring, before the buds open.

The ideal land for growing is loam, sandy loam. It is necessary to prepare the pit in advance, dig up and add lime.

After seven days, you need to add organic matter, manure or compost, from ten to fifteen kilograms.

Nearby, it is worth planting crops for additional pollination, at least three, the gap between crops should be at least two meters. the hole should be prepared in the fall. pit dimensions: depth from fifty to sixty centimeters, width about one hundred centimeters. in the middle of the pit, it is necessary to install a support.

When planting the Black large cherry variety, make sure that the root collar is seven centimeters from the soil. The soil must be compacted when planting.

Next, you need to make a near-trunk circle, then fill it with fifteen liters of water, add mulch after the water is absorbed into the soil. The seedling must be attached to the support, you can use twine.

For three years after planting, watering, weed removal, and loosening of the earth are necessary. After moistening, the soil must be covered with a layer of peat and dry manure.

Loosening is done up to three times per season, loosen up to eight centimeters deep so as not to injure the roots.

Nutrition is necessary during the first fruiting period. Organics should be fed once every two years, minerals can be up to twice a year. In the autumn, they feed with phosphorus, potassium, in the spring - with nitrogen. Also, once every five years, lime and charcoal are added to the soil.

When fruiting, the Black large cherry variety is moistened once a hectare season, when the fruits ripen, watering increases in size, two or three buckets per tree. Young shrubs moisturize more often. In heat or drought, moisten two or three times a month.

After planting a bush, a cut procedure is performed. Seven or eight strong shoots are left for crown development. This procedure is carried out in the spring, before the kidneys swell. This culture does not like the density on the crown, so branches over forty centimeters in size are cut in half or a third.

All shoots that are curved towards the trunk are cut off. An adult tree should have no more than ten skeletal branches. If the branches are cut correctly, it can reduce the number of diseases.

Cherry Black large is weakly resistant to diseases such as coccomycosis and moniliosis.

With coccomycosis, fruits and foliage are affected. Symptoms: the appearance of small brown specks on the foliage. Next, a pink layer of plaque appears. The leaf dries up and falls off. The berries rot, turn black.

To combat this disease, all injured branches are cut off, the cut site is disinfected with copper sulfate, fallen fruits and leaves are collected in a heap and burned. For prophylaxis, it is necessary to disinfect the tree with Bordeaux solution twice during the period.

Moniliosis is the main enemy of culture. With a disease, the whole tree is affected by such a fungus. The development of the disease can be in cold and damp weather. Symptoms: the appearance of brown spots on the foliage, then they become larger, in the form of burns.Then the fungus goes to the trunk and the whole tree, then the fruits are affected. If you do not immediately fight the disease, then the culture may die.

When fighting, use Bordeaux mixture or copper sulfate.

You also need to collect all the fallen leaves, cut off all the affected parts of the tree, treating them with garden varnish or copper sulfate, remove the fruits and burn everything.

Propagation of currants by cuttings, green cuttings and layering

Chokeberry. We grow it right! 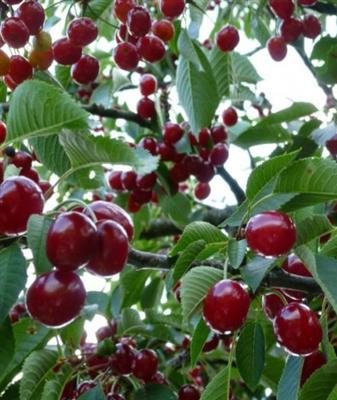 Cherry Kasmalinka
The variety was obtained by crossing the "Steppe Blizzard" and its hybrid form "Blizzard + pollen of varieties ... 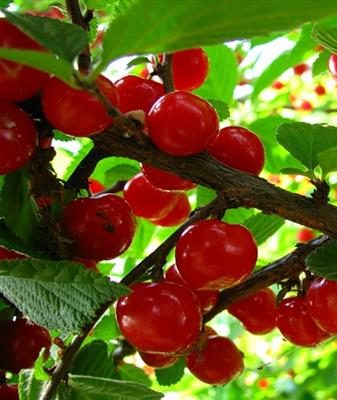 Cherry Beauty
Cherry Krasavitsa received in the VIR named after Vavilov N.I. in 85 of the last century, by crossing ... 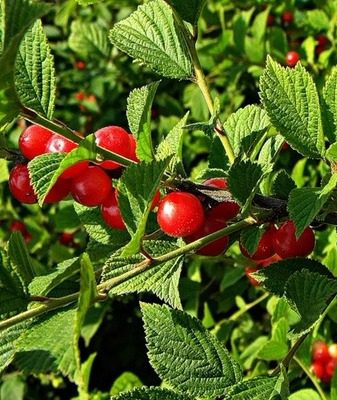