Grape as a garden culture has been known for a very long time. This type of plant has always been revered, respected and legends have been made about the healing properties of its fruits. Mentions about him can be found in ancient literary works, in which writers compared grape fruits with the "nectar of the gods." And in the Kiev-Pechersk Lavra you can find the phrase: "There people are happy, where grape vines grow." Grapes have always been considered a southern plant that loves a lot of sun and air filled with moisture. But now grapes can be found in many regions of Russia, and not only in the southern ones. Therefore, today we will talk about a variety that is heard by the majority of the world's population, namely Cabernet Sauvignon grapes. 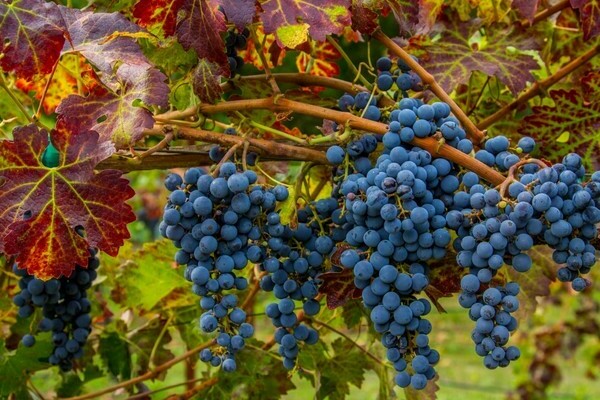 This variety was obtained by French breeders, it was they who first described and published photographs of their creation. The Cabernet Sauvignon grape variety was obtained by crossing the Sauvignon Blanc and Cabernet Fan varieties. The new type of grapes was adopted with a bang and now the main direction of processing the fruits of this variety is winemaking, since this variety is not suitable for fresh consumption, due to its taste characteristics.

The bush has a wide spreading network of branches with beautiful carved five-lobed foliage, which has denticles along the edging, which makes the leaves prickly to the touch. In the autumn season, reddish spots appear on the foliage of the grapes, which give a special visual high cost to the plant and attract many views. Despite the fact that this variety has flowers of both sexes, both female and male, on one plant, pollination has to be carried out artificially to combat peas. Reduction of grapes is called a reduction in the fruit of the grapes, most often this occurs from insufficient pollination of the plant during flowering. Many growers write about this in their reviews.

The main form of the bunch is canonical, sometimes a branch is formed in the upper part of the bunch, this branch is popularly called a wing. By weight, one cluster reaches about 100 g, and the length is 12-14 cm. Fruits are blue with a waxy coating, large, 1-1.5 cm in diameter, with seeds. The berries have a thickened skin, due to which the fruits of this variety have excellent transportable qualities, which makes it an excellent technical variety. The fruits are very fragrant, this nightshade aroma is transferred to the wine. It is not worth paying attention to bloom, and even more so to be afraid of it, since this is a kind of wine yeast, because of which these varieties are very popular in wine production.

Much is known about the characteristic positive and negative aspects of the Cabernet Sauvignon grape variety due to its popularity among amateur winemakers and professional winegrowers.

So, the variety is high-yielding, but requires attention, care and stable climatic conditions. If all these conditions are met, up to 70 centners of berries can be harvested from 1 hectare of land. The fruits tolerate transportation well over long distances without losing their presentation due to their dense skin. For the same reason, Cabernet Sauvignon grapes do not burst during growth on the vine, from where they practically do not crumble.

Another advantage of the thick skin of the fruit is the ability not to worry about the time of harvest, since even in overripe berries they do not crack or burst. The variety is resistant to frost and drought, is not afraid of most pests and diseases.
The Cabernet Sauvignon grape variety is grown for the industrial production of dessert red wines. 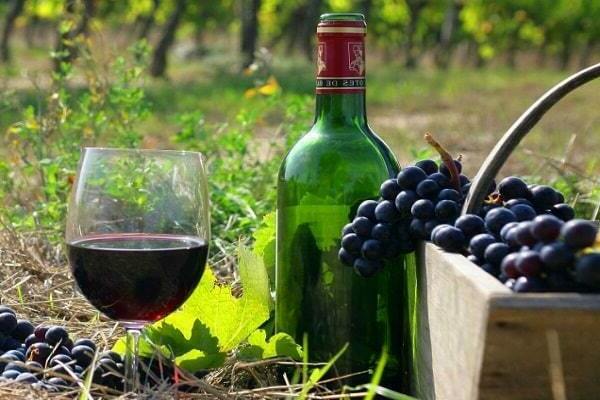 As for the weaknesses, it is worth noting the likelihood of the appearance of peas, and, consequently, the need to control the progress of the pollination process, and sometimes manual pollination, which takes a lot of time. During the period of the ovary, the plant is afraid of strong winds, since they may shatter during the initial period of the ovary. The variety prefers warm and stable climatic conditions, does not like rain, therefore, this grape variety is not suitable for any region, both Russia and the world. The fact that Cabernet Sauvignon grapes belong to late-ripening varieties, the berries appear 145-155 days after the formation of ovaries, also belongs to the features rather than the disadvantages. 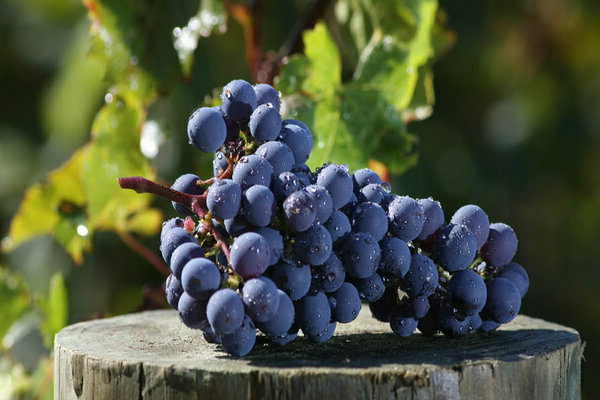 Based on the feedback from amateur gardeners and people involved in the cultivation of grapes professionally and in large volumes, we can conclude that the Cabernet Sauvignon variety is unpretentious in the care of grapes. Nevertheless, in order to get a good harvest, it is worth following a number of recommendations. Cabernet Sauvignon grapes have many types and subspecies, with different characteristics, so this can be found in various parts of Russia.

Cabernet Sauvignon grapes are not picky about the soil and grows well on a variety of soil types. But there are a number of requirements for lighting. The grapes love sunlight and southern mountain slopes. Naturally, there are no mountains in standard garden plots, so it is advisable to create hills artificially. In addition, so that sunlight is constantly present, the grapes are planted in rows from north to south. This type of fit will also create stable air ventilation.

There are several factors to consider when planting. The first of these is the distance between the rows, it should be about 3-4 meters. It is not worth saving land and making the rows closer to each other, since this distance is optimal for sufficient air circulation, and will also help to quickly eliminate the diseased plant before the disease has moved to neighboring plants. Usually the Cabernet variety is planted in the fall or spring seasons.

It is important to keep track of the frequency and amount of watering. There are no specific recommendations for time and quantity, an attentive human look will only help here. During the growing season of the plant, timely watering is important, as well as loosening the soil and removing weeds. If the period of ovaries does not fall on a period of high temperatures, then it is advisable to spray the bushes. The greatest attention should be paid to watering during the ripening of the grapes. If this period falls on a period of drought, then it is advisable to use root watering so that water does not fall on the leaves and does not harm them. If, on the contrary, there are heavy rains, then you do not need to water the plant additionally. Since the abundance of moisture, the berries can become watery in structure and become almost tasteless.

In the spring, and then, if necessary, the ground is covered with mulch, for example, straw, sawdust, peat, etc. In the cold season, it will help prevent root damage from low temperatures, and at high air temperatures, it will prevent the rapid evaporation of moisture.

Do not forget about feeding the plant for stable growth and development. The vine will accept both organic and mineral fertilizers. Top dressing is usually carried out several times in one season, the last time being in the second half of July. This is due to the fact that since the second half of July, the main flows of substances in the plant are directed to feeding the bunch, and late top dressing can lead to an outflow of nutrients for continued growth and development of foliage, in which case it is not worth hoping for a good harvest.

The first pruning and formation of a grape bush occurs on one-year-old shoots. A short pruning is recommended for young Cabernet grapes, this allows you to increase the yield of the bush, since with this type of pruning, the lower eyes actively grow and bear fruit. Most often, Cabernet is grown on fairly high boles, leaving young shoots hanging down. So that young vines do not grow much, they are shortened by 5-6 eyes. By the spring eyes, you can approximately determine the yield of each bush. Therefore, if it is clear that the yield of the bush will be high, then to reduce the load on the bush, the fruit arrows are shortened.

Cabernet Sauvignon grapes have many different diseases. These are fungal diseases - mildew or powdery mildew, mildew or downy mildew, anthracnose, and bacterial diseases - rubella, bacterial cancer, chlorosis. For the fight and prevention against them, a variety of special chemical and organic agents have long been developed.

It is worth noting that Cabernet Sauvignon grapes are not affected by the activity of grape aphids. The most dangerous insects for this variety are spider mites and grape mites. Due to their small size, it is difficult to see them on the plant with the naked eye. But their activity is perfectly manifested on the foliage of the plant, since red swellings appear on the leaves. The most popular folk remedies for these insects are spraying with soapy water and 4% Bordeaux liquid. When spraying, you should carefully walk over the entire plant - foliage above and below, trunk and stems. To consolidate the effect in summer, plants and beds are sprinkled with sulfur.

The insect pests of Cabernet Sauvignon grapes and most berry crops include the bunchy leafworm butterfly, as well as its offspring. A spider web that appears on foliage and fruits will tell you about the appearance of a pest. Butterfly caterpillars feed on fruits and spoil the ovaries of the plant. To combat this pest, poisonous chemicals are used - insecticides, which are toxic for the most part. In addition, fungicides are added to insecticides - substances that help get rid of fungal diseases and mold. Due to the high rates of toxicity, the last treatment of grapes with insecticides is carried out a month before the harvest.

There are many reviews of Cabernet Sauvignon grapes from both professional winegrowers and amateur gardeners. Let's consider some of them. 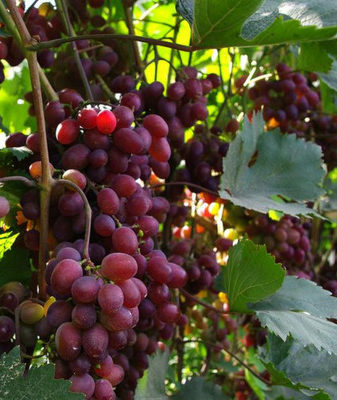 Victoria grape
Not every experienced gardener undertakes the cultivation of grapes in the middle lane, suspecting that ... 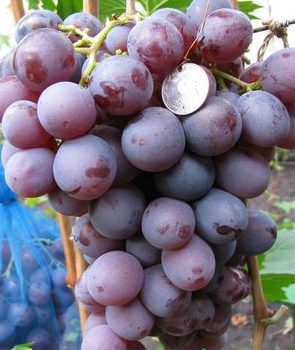 Lowland grapes
Grapes are mainly grown in warm climates, as the plant is very fond of ... 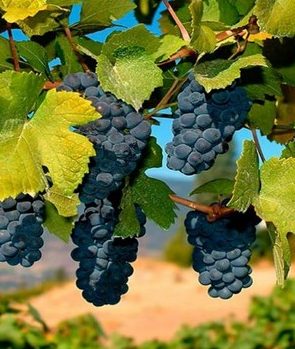