Just a few centuries ago, the Anise apple variety grew in every garden. This handsome man was deservedly considered the best among apple trees. Its juicy fruits adorned the royal tables, from which magnificent desserts were created, which were treated to overseas guests. They were added as a filling in baked goods, marshmallows were made, preserves were cooked and dried.

Currently, Anise has not lost his popularity, of course he has competition with the Jonathans or Golds, but his positive qualities and features help to maintain his place of honor in the garden. 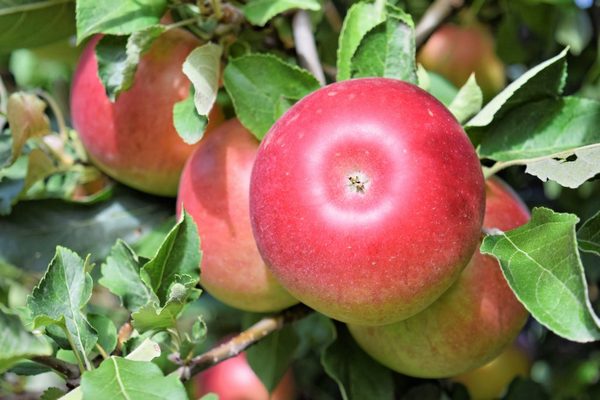 Anis began its distribution from the gardens of the Volga region. This variety is loved, and is on a par with Antonovka in popularity. Russian biologist Michurin I.V. often used the variety in his works. The fruits of the Anise apple tree were consumed in incredible quantities in industrial areas.

Anise apple trees are a large group of clones with many common characteristics.

The young tree has a conical crown of medium density. As it grows and develops, it becomes more spherical.

The leaf plates are slightly curved, the edges are jagged. They have a bright color and a shiny surface. The bark of the apple tree is ash brown. The tree is above average in size, vigorous. Young shoots are almost without leaves. The first fruits are formed in the fourth or fifth year of life, on three-year shoots, in 90% on spears and ringlets. The variety gives a stable annual yield.

Fruiting has a long period. One adult tree can yield a yield of three quintals or more. Note that on an aging tree, fruits are formed in smaller sizes. 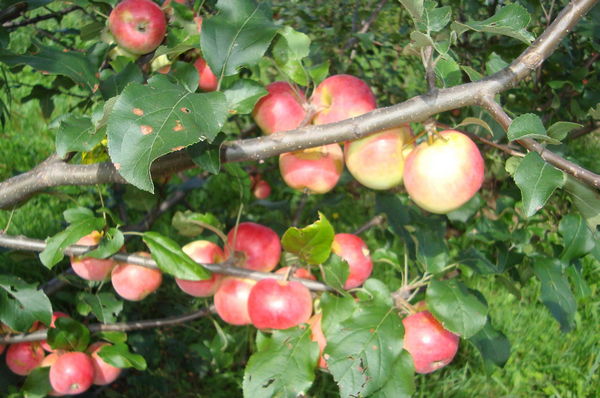 Anise is famous for its diversity across the globe. At least one hundred and fifty species of this variety are known, sixty of which are found in the Samara region. They all have common features in appearance, as well as the same signs and properties. But at the same time, there are certain differences, mainly taste.

Pluses of the variety.

Apple Anise is a guarantee that you will always have an apple harvest. Their positive qualities easily cover all minor flaws. Let's list Benefits:

Cons of the variety

In addition to the advantages, the Anise variety also has disadvantages. They should not be ignored as they can reduce yields.

- low immunity to powdery mildew and, as a consequence, frequent damage to this disease
- 80% medium-sized fruits
- there are periods with low yields

With the necessary knowledge in your arsenal, you can influence these qualities. By systematically performing hygienic and sanitary pruning, you will contribute to higher yields. In addition, by performing this type of care, the fruits become larger.Prevention of fungal diseases will protect not only Anis trees, but also neighboring plants. 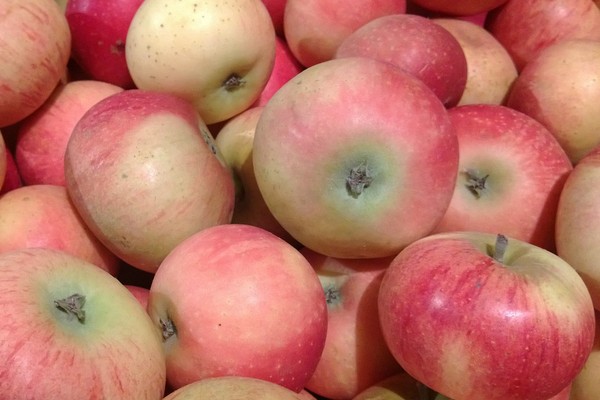 The fruits of the Anise variety are well attached to the tree and do not crumble until the time of harvest. The shape of the apples is round, the surface is not smooth. The color combines several colors:

All these colors can pass from one to another and create an incredibly beautiful color of the fruit of the Anise apple tree.
The described variety has a rather long shelf life. In appropriate temperature conditions, such as a cellar or refrigeration units, the crop will retain its appearance and taste for up to 30 days.

The presentation of the variety is estimated at eighty percent out of a hundred, and 35 percent of the total harvest is the highest quality fruit.

Anise apples will please even the most picky gourmets. The pulp is abundantly written with juice, of a snow-white color with a slight shade of green. The variety has its own distinctive features, thanks to which you will not confuse it with any other, here they are:

During the flowering period, buds of a pale pink color, cup-shaped, medium-sized are formed on the apple tree.

The most common types of Anise 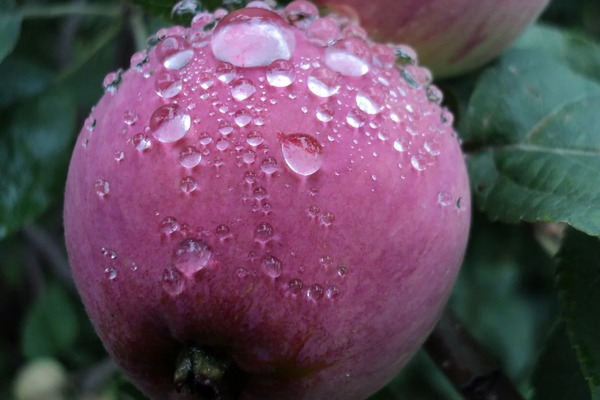 The largest number of this species is grown in the north-east of the Volga region. This variety is the first in the list of those that breeders use to obtain new species. Anis Aly has already presented its positive qualities to a large number of well-known varieties, such as:
- summer variety Solntsedar
- Doch Papirovki
- early summer variety July Chernenko

Anise Scarlet is not very whimsical to care for and grows well in almost any type of soil. This species can be grown even in mountains and hilly areas. The fruits have their own characteristic, in the form of a pink blush. 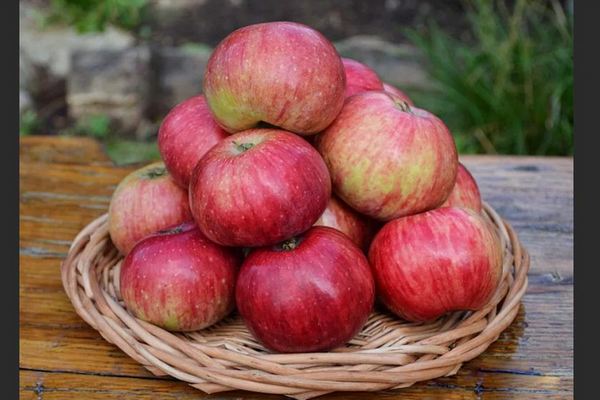 The second common name is Anise gray. Fruits are medium, slightly larger than the described variety. The skin is painted in a gray-marsh color, from which the second name came from. The shape is rounded, slightly pressed from the top and bottom sides. 80% of the apple surface is covered with a striped-spotted blush. The pulp is juicy and aromatic. The taste is sweet and sour.

Harvest from Anis striped harvested from the 20th of September. A distinctive feature of this species in comparison with other Anises is the highest resistance to low temperatures and drought. Good immunity to fungal diseases and various pathogens. There is only one drawback: tallness. 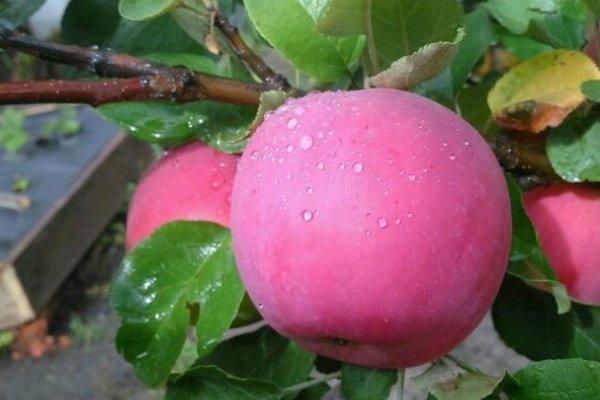 A distinctive feature of Anis Sverdlovsky in comparison with other Anis species is its average height and an egg-shaped crown. The variety easily tolerates frost and is unpretentious in care. In addition, the fruits have an excellent appearance and excellent transport. The mass of one apple is on average one hundred and twenty grams. The shape is rounded, light lemon in color with a rich pink-red blush. The only drawback is the poor resistance to scab disease.

The name of the species speaks for itself, the fruits are purple in color with a reddish blush. This variety is characterized by large apples with excellent external data. In addition, the harvest is excellently preserved for a long period of time and has a high transportability. The pulp is juicy with a rich apple aroma. 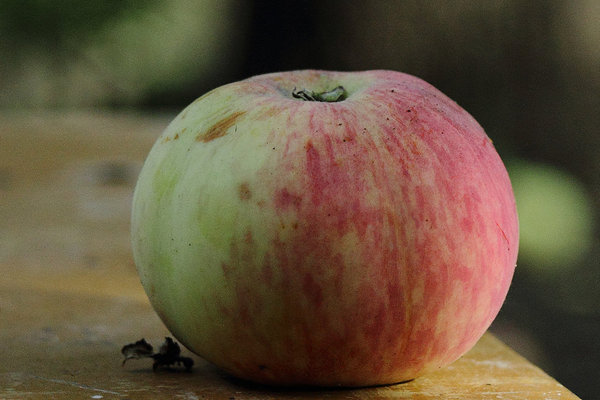 For pink Anis, all the positive qualities are characteristic, as for all Anis as a whole. A distinctive feature is only the fruit, in which most of the skin is colored with a pink blush.

How to choose a seedling?

If you decide to plant Anise in your garden, then when choosing a seedling, pay attention to the following nuances:

one.The best age for planting a seedling in a permanent place is one or two years.
2. Trees of one year of life can be without branches or have only 2-3 branches.
3. Anise 2 years old, must have 4-5 shoots.
4. The kidneys should not be open, but swelling is acceptable. The more you see the leaf, the more difficult it will be for the seedling to take root.
5. A developed root system is a guarantee that the tree will take root. If you see dry or poorly developed roots, you should not take such a seedling.
6. The graft is located 7 or 8 centimeters above the root.
7. The bark must be healthy. The presence of cracks, ulcers, erosion and delamination is another reason to postpone the purchase.

It is better to purchase a seedling in a proven nursery, it is not worth taking what is closer and cheaper for the sake of saving time and money.

Be sure to follow all the basic steps for caring for the apple tree.

Then you will not regret choosing anise for your garden, and tasty and healthy apples will have a beneficial effect on the health of your whole family.