Cherry Oka Ruby, unfortunately, is far from the most common and well-known variety. In addition, it should be noted that many gardeners prefer significantly more popular varieties with more pronounced positive qualities.

Nevertheless, we cannot fail to notice that the Oka Ruby cherry is ideal for beginners, as well as for those who want to start growing cherries. The experience of caring for this plant will help you improve your skills necessary for any gardener, and therefore we invite you to get to know this tree better.

Cherry variety Oka Ruby was bred thanks to another mother cherry, which is called Lyubskaya. The discovery belongs to the Nizhny Novgorod ASU, and the author of the study is E.P. Eliseev.

The cherry variety Oka Ruby has been used for twenty-five years, but, as you already know, it has not taken advantage of its great popularity.

Of course, like any other cherry, the Oksky Ruby cherry variety has its own distinctive features, which make it an ideal plant for “green gardeners”.

These features, as well as the general characteristics of the plant, are indicated below.

Cherry varieties Oka Ruby most often grows to a height of about two and a half meters. At the same time, it should be noted that the plant can reach this height only when it is about eight years old.

The crown of the cherry tree Oka ruby ​​has a regular geometric shape, which, nevertheless, needs to be looked after and constantly crown-forming pruning.

The crown density is average, which allows the fruits to be saturated with solar energy and becomes much tastier and juicier.

Fruiting of the Oka Ruby cherry variety occurs on fruit twigs and twigs of both this and the previous year, however, as one would expect, older branches yield significantly fewer cherries than young ones.

The cherries on this tree grow incredibly beautiful and juicy. Their marketable appearance could be the envy of many other varieties, and at the same time they even have a fairly good mass.

On average, each individual Oka Ruby cherry weighs about four to five grams. The color of the fruit is rather dark and very glossy, which further emphasizes the marketable appearance of the cherry. The flesh of the Oka Ruby cherry variety has exactly the same color as the skin of the fruit, and it should be noted that it is very juicy, although quite firm.

Professional gardeners rate the external qualities of this variety, for which it became famous in narrow circles, at approximately four and a half points. As for the taste, they also do not lag behind the external ones and, perhaps, even ahead of them. The tasters gave the fruit of this variety no less than four and seven tenths of a point.

Also, the Oka Ruby cherry for the most part retains its basic qualities after a long freeze, and therefore it is also suitable for harvesting for the winter.

Of course, the positive qualities of the Oksky Ruby cherry variety do not end with the excellent taste of the fruits, as well as their amazing appearance.Do not forget, for example, that the Oka Ruby cherry is self-fertile, which means that you do not have to plant any pollinators with it.

It should also be emphasized that its fruiting is constant and never interrupted. In addition, about fruiting, we can say that trees of this variety become capable of yielding crops already in the second year of life. Sometimes (in the event that the tree is not well looked after or the weather turned out to be unsuitable), this period falls into the third year.

The very ripening of Oka Ruby cherries occurs at the very end of July. On average, you can collect about fourteen kilograms of fruit from one tree. However, this applies exclusively to the first years of fruiting, when the plant is still young.

Older representatives of the variety, of course, bear more fruit. On average, this is about eighteen to twenty kilograms, which, given the size of the tree, is a pretty good result.

Also, speaking about the physiology of the Oka Ruby cherry variety, one cannot fail to mention its excellent resistance to cold weather, which is especially relevant in the conditions of our harsh winters. The plant survives especially well the spring return frosts, which are practically not able to inflict any damage on it. 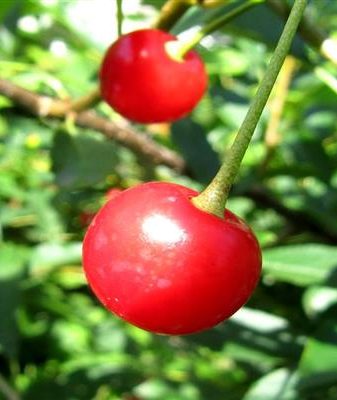 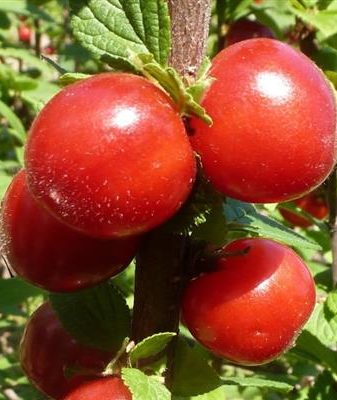 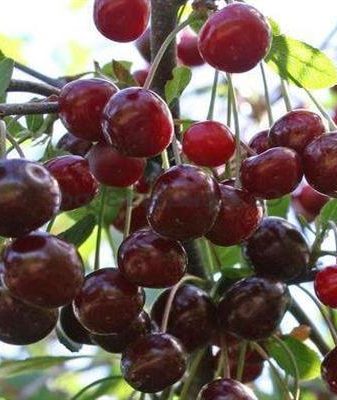