Lily of the valley

Lily of the valley description 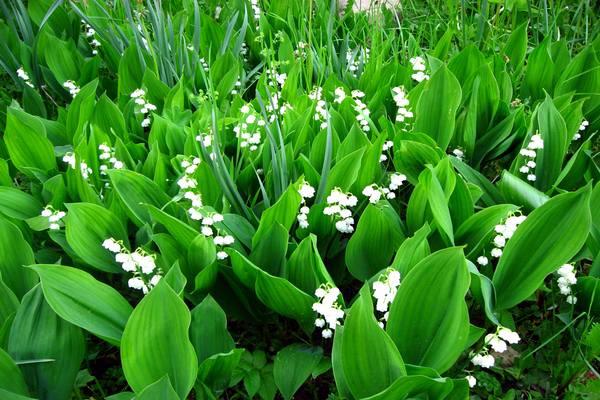 Lily of the valley is a plant that is represented both in a group with several species and an individual monotype of a monocotyledonous flower of the asparagus family. Relatively recently, representatives of this genus of plants were classified as liliaceae, lily of the valley families. The physician Karl Linnaeus, in the seventeenth century, assigned the name to the flower Lilium convallium, which in Latin means Lilia of Dolin. In Russia, the name Lily of the Valley has taken root, which came to us, most likely from the Polish language. Other names are known among the people: shirt, smoothie, hare ears, silversmith, young man. In its natural habitat lily of the valley on the continents of Eurasia and North America. It feels best in shady places from deciduous to pine forests. This plant has been cultivated by people since the sixteenth century. There are places on our planet where lilies of the valley have their own holiday and this is France. Lilies of the valley are also widely known for their medicinal qualities, used both in folk remedies for combating diseases and in pharmaceuticals. And of course this plant is used in perfumery for its individual and memorable aroma.

Lily of the valley cultivation 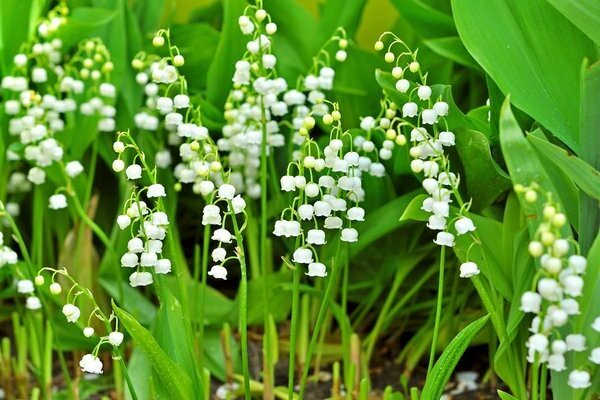 Lilies of the valley are a protected plant and are listed in the Red Book. The flower is beautiful in its prostate, there is nothing superfluous in it and everything is perfect, visually combined, small snow-white flowers and rich green leaves, as if protecting the inflorescences with their wide shapes. Lily of the valley loves shady areas, and in neighboring plants prefers to "see" ferns and lungwort, catchment and anemonastrum. The culture described in the article has high growth rates, and such plants will be able to restrain the spread of lily of the valley over the territory of the site. In addition, the poison contained in the plant destroys most types of flowers if they are planted close to the lily of the valley, in this regard, gardeners install fences.

Lily of the valley planting and care 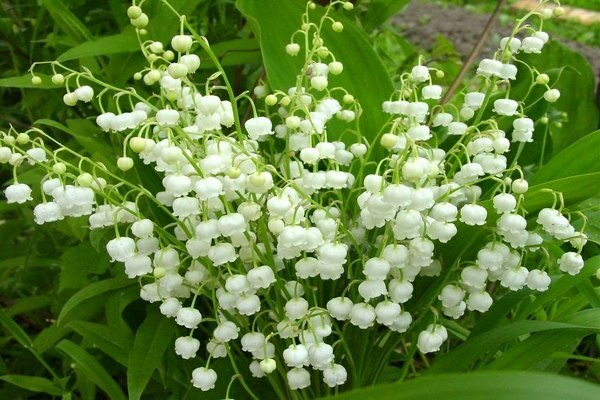 The best time for planting in the open ground of the culture described in the article starts in September and ends in November. The flower feels best in shady areas, near bushes or garden trees; in such an area, moisture remains in the soil longer, which is suitable for this plant.

When deciding on a planting site on your site, in a garden or in a park, do not forget that although the lily of the valley prefers shade to it, like most plants, it is necessary to receive sunlight for normal growth, without this the plant will not enter the flowering period and beautiful white bells "Never appear. An important point: the lily of the valley is a rather fragile flower, so it needs to be protected from powerful gusts of wind. The soil must be saturated with moisture, have good indicators for the content of organic and mineral substances, and the level of acidity is low or neutral. With an increased level of acidity, its adjustment is possible, for this you will need:

The preparation of the site for planting lily of the valley is done in advance, that is, if the planting of a flower is planned in the fall, the soil should be prepared in the spring.

Planting in the fall.

The planting of this culture is carried out in rows, in pre-prepared trenches.The distance between the furrows varies from twenty to twenty-five centimeters, and a gap of ten centimeters is laid between the flowers themselves. The main method of breeding lily of the valley is considered to be the division of the rhizome, but some grow crops from seeds. The main disadvantage of the second option is that this method gives very low germination rates. Performing the first option, the plant divides, so that sprouts (at least one), rhizome and root lobe are present on each piece. The sprouts on which a flower bud has already formed, after going through a period of adaptation, will delight you with flowering next spring. On such seedlings, the top is oval, and its diameter is at least six mm. Sprouts with opposite characteristics, smaller diameter and a sharp tip will release only leaves next season. The depth of the trenches should be such as to accommodate the roots of the plant in an upright position, the flower seedlings themselves are deepened into the ground by a centimeter or two. Some gardeners plant the flower in dry soil and moisten it abundantly at the end of planting. With the onset of the first cold weather, the culture is protected from frost with mulch. Thus, you will protect the young plant from freezing if it snows. Lily of the valley can grow in one place for five years, after which it should be moved to a new place.

Lily of the valley can be planted in the spring, but in this case, during the planting season, the plant will painfully go through a period of adaptation and the flowering period will not come. Nevertheless, no matter how strange it may seem, with pain while getting used to a new place, adaptation goes better. Having planted a lily of the valley in the spring, the plant is covered with a film at night to protect it from frost.

Cultures like lily of the valley do not require reverent care or any special manipulations. A striking evidence of this can be considered the ability of the species to survive other plants. For pedantic gardeners, and people who love neatness in their flower beds and on the site, this will not be enough, since you always want to see plants that are ideal from the point of view of visual perception on your site. In this regard, let's outline the main points for caring for a lily of the valley:

The flowering period of this culture is rather short and in June there are no flowers on it, but gardeners do not dig them out and do not cut them, and the spectacular rich green foliage continues to decorate the landscape. In order to avoid the uncontrolled spread of the culture over the site, the area for growing the flower is fenced with slate, the sheets of protective material that create the perimeter are deepened by 40 cm.If the lily of the valley needs to change its place for good growth, then the plant is transferred in the autumn period. If there is no such need, then you, as a gardener, can rest without thinking about caring for the flower. Lily of the valley culture is frost-resistant and does not require additional shelter for the cold season. In the spring, after the snow melts, the site is cleared of old foliage. After a short period, you will notice the first young shoots.

Having chosen a lily of the valley for your site, it is worth remembering that this plant contains poison.For this reason, when performing any manipulations with the flower, wear gloves. If your family has children, be sure to explain to the younger generation about the dangers contained in the sheets and flowers; this plant should never be eaten. Lily of the valley is often found in traditional medicine, without experience in the manufacture of such drugs, you do not need to try to do it yourself. Medicines presented on the shelves in pharmacies in your city, containing lily of the valley extract, are no exception, and should be used only on the recommendation of a doctor, in strict accordance with the prescription.

Considering the above, below we will describe such species. 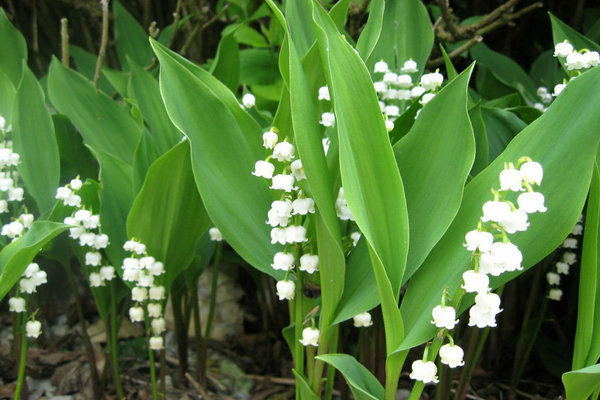 In its natural habitat, it grows in the temperate zone. The inflorescence contains from six to twenty flowers, which are attached to a long peduncle. This species has a characteristic rich aroma, the flowers are bell-shaped, and their color can be pastel pink or snow-white, the edges are slightly bent outward. Lilies of the valley are known to be the earliest flowers in May, hence the name.

- Grandiflora is a large-flowered species, its flowers are the largest of all representatives.

- Proliferance is a type of lily of the valley with a characteristic double surface of petals in white flowers.

Convallaria Keiskei grows in its natural habitat: in Japan, in Northern China, in the chain of volcanic Kuril Islands, as well as in Korea. The moist soil of floodplain and taiga forests is perfect for this species. The flowers are quite large and the flowering period falls on an earlier date in comparison with the species described above. It is this variety that is used by landscape designers in the design of parks and squares.

In the wild, this variety grows in the American Southwest. This plant, unlike the lily of the valley in May, has leaf plates of a larger area and the shape of the flower is wider. 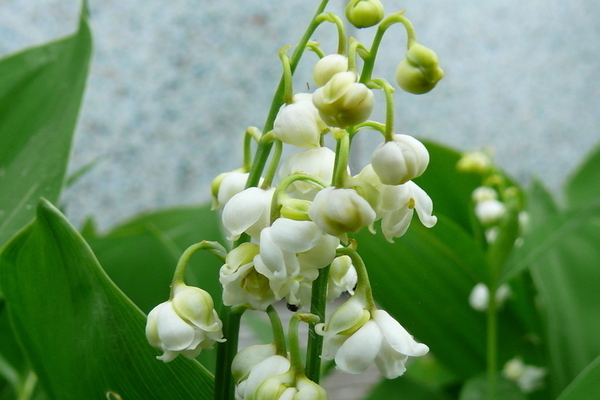 It is part of the flora of the Caucasian forests. Just like the previous variety, it has wider flowers in comparison with May lily of the valley, the color of which is habitually white for the culture as a whole.

Basil in the garden: an encyclopedia of spices!