The Clematis plant belongs to the buttercup family and has about three hundred varieties. The plant got its official name from the Greek language (from the Greek "klema" - climbing plant). And among the people this plant is known under such names as Lozinka, Warthog or Grandfather's curls, but most often the name Lomonos is found.
Clematis Blue Light has large inflorescences that can delight gardeners not only in an open-air flower bed, but also at home in a flower pot on a windowsill. Having a number of features, such as unpretentious care, immunity resistance to various diseases, active and bright flowering twice a year, the plant attracts the attention of gardeners. 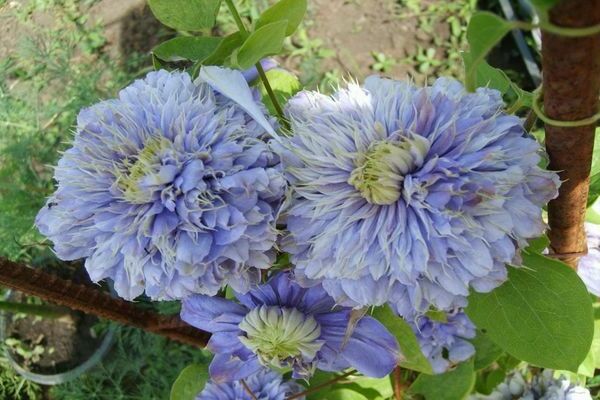 The name of this variety was given for the color of the flowers, which mainly have a blue-blue palette (from the English "blue light" - blue color). This plant is ideal as a natural decoration for garden buildings - gazebos, pillars, trellises and landscaping of the garden area. On which the liana grows, using leaf petioles as clothespins to the supports. The plant grows well on natural supports - trees, shrubs, both deciduous and coniferous. In these cases, an excellent color combination of foliage or needles with clematis inflorescences is obtained. In addition to the aesthetic function of decorating a garden or home, clematis flowers of this variety are used for floristry, when composing bouquet compositions.

Blue Light Clematis is an early perennial vine that can grow up to two meters in length. This variety loves sunny and partial shade, non-windy places, where drafts will be almost completely absent. It is unpretentious to the soil, but does not like large and frequent stagnation of water. Pruning is sometimes required to give a particular aesthetic shape. 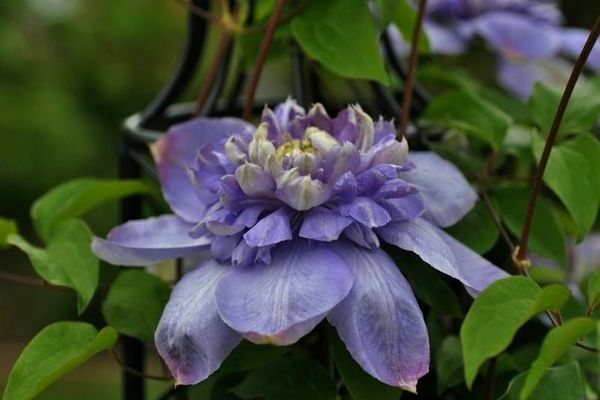 Despite the fact that Clematis Blue Light is an undemanding and unpretentious plant, it also has its own small preferences.

The soil. The most suitable for this plant will be the most common soil - loose fertile types of loamy soils, with good carrying capacity. In heavy, saline, acidic and other types of soils, which contain a large content of one or several substances, the plant will grow hard, or may not take root at all.

When planting a seedling in open ground, you need to monitor the temperature indicators so that the root system of a young plant does not overheat. If the air temperature is too high, then for a safe young plant it is necessary to cover the soil with mulch, this will also help to retain moisture in the ground. With an adult plant, such additional efforts do not need to be done. For him, rare but abundant watering will be more important.

If, nevertheless, the land in your garden is not at all suitable for growing clematis, then you can prepare a suitable soil yourself. The recipe is simple earth, manure, sand in a proportion of 3-1-1.

When transplanting seedlings into open ground, a number of rules should be taken into account so that the plant does not die. Firstly, this is the planting depth, the plant should be planted to a depth of 10 cm, then the plant will easily endure the winter cold. Secondly, it is necessary to pour a mixture of sand, humus, ash and fertilizer at the bottom of the hole, form a small mound inside the pit and plant the plant in the center of this mound, spreading the roots along the slopes of the mound. If, during transplantation, you notice that the roots of the seedlings have dried up, you should place such seedlings in ordinary water or in water, with the addition of growth-stimulating substances, for a couple of hours and only after that they should be planted in the ground. Thirdly, at the end of the transplanting process, the plant must be watered very well, and the soil around the stem must be sprinkled with mulch.

It is advisable to immediately, when transplanting a clematis seedling to a permanent place of growth, establish a support near it, along which the plant will curl and grow in the future. It is important, if you plant or install a support against the wall of any outbuilding in the garden, you should leave a distance between them so that the abundant amount of rainwater does not negatively affect the life of the plant.
Often, to create partial shade for a young clematis plant, gardeners plant next to it plants with a shallow root system, such as calendula, iris, phlox or marigolds.

Further care of the plant is simple - watering, loosening the earth, removing weeds, fertilizing with fertilizers. 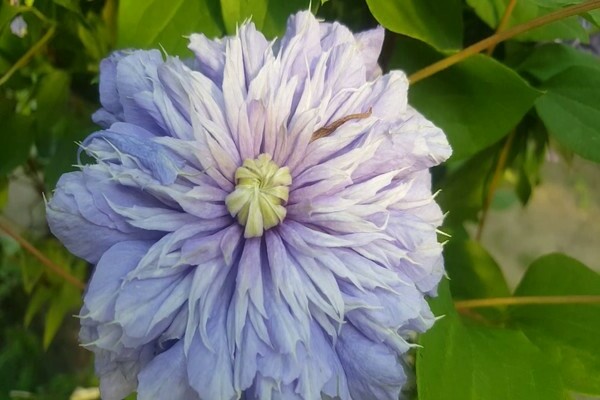 It also has its own peculiarities. For example, the most common mistake gardeners make is frequent watering in the middle of the clematis bush, which he is least happy about. Since this leads to decay of the root collar and the base of the bush. Surface watering is not required for the plant, due to the deep-rooted system of the plant. therefore, the plant practically does not use water from the surface of the earth, which leads to a large accumulation of water and the creation of an optimal environment for decay.

Clematis needs to be watered rarely, about once every 3 days, and abundantly, up to three buckets of water per adult bush. In addition, it is necessary to make a depression in the ground, at a distance of 25-35 cm from the stem of the plant, so that water does not spread over the surface of the earth.

Experienced gardeners have invented original ways to water the plant. So that the water reaches the roots, and does not remain on the surface of the earth, gardeners, when planting or transplanting a plant at a distance of 25-30 cm from the stem, dig in plastic pipes or the tops of plastic bottles, into which water is poured later during irrigation. In this non-tricky way, water can be accurately supplied to the roots of clematis.

After each watering or heavy rain, the soil at the plant must be loosened. This will help not only to avoid overheating of the plant root system, but also to dry out and weathering of the soil.
Clematis prefers peat with semi-rotten compost as mulch. It retains water well, is an additional type of food and will help preserve the root system in the winter. 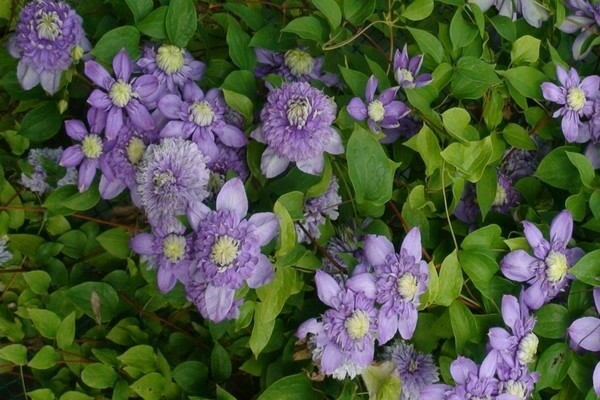 Since clematis blooms twice a year, this plant needs a lot of strength in order for it to please with its large and bright inflorescences during the entire flowering period. To do this, it must be fed at least several times a month if the variety is large-flowered, and several times a season for small-flowered varieties.

Important trace elements in the life of clematis include potassium, nitrogen and phosphorus. Fertilizers containing these microelements, and it is necessary to feed the plant, about 3-4 liters for each cut of the plant.

Why is the lack of these trace elements in the life of clematis terrible? Nitrogen promotes the development of new shoots, with its lack, young shoots grow slowly and generally grow rather short, new foliage also grows rather small, and the old one begins to turn yellow, inflorescences are also formed small with a faded color range.To eliminate the lack of nitrogen, you can use specialized mineral fertilizers, which contain nitrogen, for example, urea (up to 20 g per 10 liters of water), or you can use a number of folk remedies. One of these is the breeding of animal or poultry droppings in water, in a ratio of 1 to 10 in the first case and 1 to 5 in the second.

In the absence of a sufficient amount of phosphorus, the growth and development of the root system and young shoots slows down. It is desirable to add it to the soil at the stage of planting the plant, for example, using bone meal or extracts from superphosphate.

With a lack of potassium, the peduncles and pedicels begin to turn black, the flowers have an unsaturated color. And this happens because this trace element is involved in the process of organic synthesis and the movement of water in cells. Most often, potassium nitrate is used for feeding the plant in spring and potassium sulfate for autumn feeding, 20-30 g is enough for 10 liters of water.

Nitroammofosk: application, description, rules of use

Gooseberry Shalun: important secrets for growing with a photo