Hydrangea Silver Dollar belongs to the paniculate varieties of this shrub and is very popular. Gardeners appreciate it for its unpretentious nature and ability to successfully take root on soils of different composition. Hydrangea paniculata Silver Dollar will delight its owner with lush flowering almost regardless of the lighting mode, which also contributes to its widespread distribution. With this abundant flowering shrub, you can revitalize and beautify any landscape without much effort. This article will discuss how to plant this hydrangea variety and how to care for it in order to ensure lush and long flowering.

Hydrangea Silver Dollar: description of the variety and its characteristics 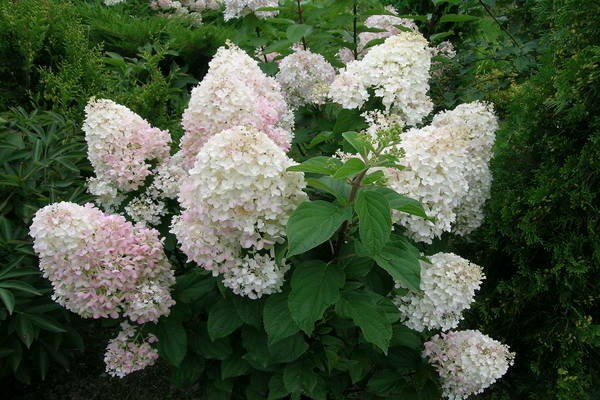 The height of the Silver Dollar panicle hydrangea ranges from one and a half to 3 meters. Most often they grow up to 2 m, reaching the same width in diameter. Due to the rather high growth rate of this shrub, gardeners should carefully calculate the scheme for planting it, taking into account the size of the Silver Dollar gortesia.

Hydrangea Silver Dollar is distinguished by rather strong and straight shoots, which successfully elongate, retaining their shape without a garter. Despite the lush inflorescences, the branches of this variety of hydrangea do not droop under their weight. The surface of the bark is colored brown: on young branches it is smooth, and on adults it is rough and partially exfoliated. The leaves are dark green oval in shape and have jagged edges and are slightly pointed at the ends.

The beginning of flowering of the panicle hydrangea of ​​the Silver Dollar variety begins in early July and lasts until the end of September. White inflorescences are shaped like pyramids and are mostly composed of large flowers that remain sterile. However, the inflorescences also contain smaller flowers that form seeds. The weight and density of the inflorescence increases during the season. "Silver Dollar" is distinguished by abundant flowering: the tops of almost all shoots are crowned first with transparent and then dense inflorescences. The buds of a greenish tint, when blooming, become white, and then they can acquire light yellow or pale pink tones. 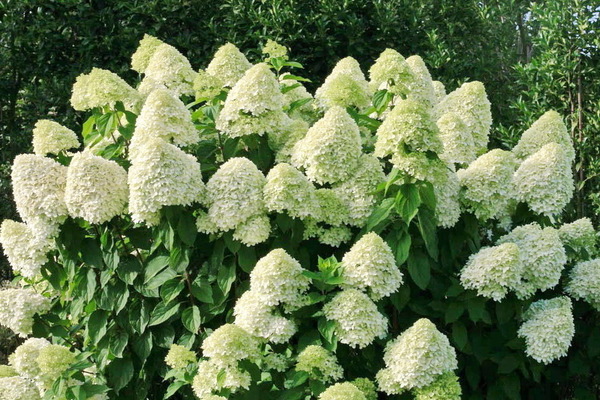 Despite the unpretentious nature of the Silver Dollar hydrangea, planting it taking into account the preferences of this variety will allow the plant to quickly take root in a new place. When choosing a place for planting the Silver Dollar panicle hydrangea, you should pay attention to the following important points: sunlight, wind blowing of the site, soil quality. Each of these factors can significantly affect the growth rate and flowering of the hydrangea.

Suitable for the Silver Dollar variety of panicle hydrangea, the lighting mode excludes exposure to direct sunlight. Hydrangea of ​​this variety prefers a little diffused light, and also takes root well in slightly shaded places and even in full shade.

A too open area, constantly blown by the wind, is not very suitable for growing Silver Dollar hydrangeas. The optimal solution is to place this lush shrub near a building or fence, which will act as a shelter from the wind.

Adequate soil moisture is essential for the successful cultivation of the Silver Dollar variety. At the same time, stagnation of water in the soil is undesirable, therefore, moderately moist soils are suitable for planting the Silver Dollar hydrangea. As for the composition of the soil, an alkaline environment is categorically unsuitable, which is destructive for this plant. All other soils are suitable for growing it. The hydrangea will feel best in an acidic and slightly acidic environment. In order to acidify neutral soil, it is enough to add a little peat to it.

Hydrangea seedlings Silver Dollar are planted in pre-prepared planting holes with dimensions of 0.3m * 0.3m - * 0.3m. If the composition of the soil has a suitable level of acidity, then the following nutrient mixture can be added to the pits: the soil extracted when digging holes must be mixed with sand and humus in a ratio of 2: 1: 1.

The size of the planting holes in the case of a neutral soil composition should be slightly larger - 0.5m * 0.5m * 0.5m. To fill them, a mixture with the addition of peat is suitable: in equal proportions, mix it with garden soil, humus and sand.

When planting a seedling, it is necessary to carefully spread its root system and carefully cover it with soil mixture so that its root collar is above the ground. After planting the Silver Dollar panicle hydrangea, water the soil around the seedlings abundantly, and then cover it with a layer of mulch, which will prevent moisture evaporation and protect young plants from drought and weeds. For these purposes, peat, sawdust and finely chopped bark of fruit plants are suitable. 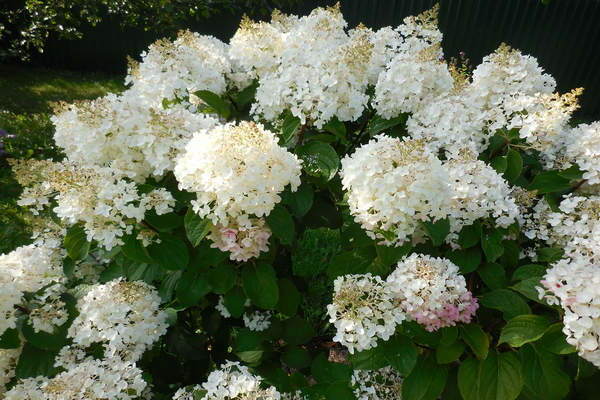 Caring for the hydrangea paniculata Silver Dollar is quite simple and consists in the following procedures: regular watering, fertilization, timely pruning and the formation of a winter shelter.
As mentioned above, the Silver Dollar hydrangea belongs to moisture-loving plants, therefore it needs frequent and abundant watering, especially on hot summer days. The watering regime assumes this procedure is carried out once every 2-3 days. The amount of water for irrigation depends on the size of the Silver Dollar hydrangea paniculata: 1 bucket of water is enough for a small bush, while an adult plant needs 2 or even 3 buckets. If the summer is rainy, the frequency of watering can be reduced. The hydrangea's need for moisture can be determined by the condition of the soil: if it is dry, it's time to water the bush. In spring and autumn, the hydrangea's need for water also decreases.

Well-settled water is suitable for watering the Silver Dollar hydrangea. Otherwise, harmful impurities contained in tap water will enter the soil - for example, chlorine-based compounds, which will cause yellowing of foliage. Therefore, it is optimal to settle water for irrigation in an open container during the day.

Fertilization will accelerate the growth and development of the Silver Dollar hydrangea. The first time the soil fertilization procedure is carried out in mid-spring, at the very beginning of the growing season, when the plant needs nitrogen, which contributes to the growth of green mass and the general strengthening of the bushes. The source of this substance is a manure solution diluted with water in a ratio of 1 to 10. The use of urea in the form of an aqueous solution prepared by diluting 1 tablespoon of urea in a bucket of water will also be effective.

At the end of spring, it is recommended to feed the hydrangea bushes with potash fertilizers, which have a beneficial effect on the process of bud formation. Potassium sulfate is suitable for this, as well as ready-made complex mixtures.

For the successful flow of the bud ripening process, it is recommended to apply fertilizers rich in potassium and phosphorus. It is optimal to process the crown of the bush with them - this will allow the hydrangea to bloom for a long time and abundantly.For these purposes, the already known potassium sulfate, as well as superphosphate, is suitable. For watering, it is enough to dilute 1 tablespoon of the active substance in a 10 liter container with water.

The last time fertilization is applied is at the end of the season, when the hydrangea bloom period ends. To strengthen young shoots and prepare bushes for wintering, fertilizing based on potassium and phosphorus is used.

Do not underestimate the importance of regularly pruning your Silver Dollar hydrangea bushes - thanks to this procedure, they bloom luxuriantly and retain their attractive appearance.

This type of hydrangea is resistant to winter cold and can withstand temperatures as low as -25 degrees. Thus, in central Russia, the Silver Dollar hydrangea may well overwinter without a special protective shelter. In those regions where winter temperatures drop and stay below 30 degrees, you cannot do without additional protection. Preparation for wintering begins with sanitary pruning of hydrangea bushes - it is necessary to remove all remaining inflorescences. The soil around the bushes should be covered with dry foliage or grass. The shelter itself is a wire frame with a plastic wrap stretched over it. Additional insulation will be created by a layer of spruce branches or dry foliage on top of polyethylene. 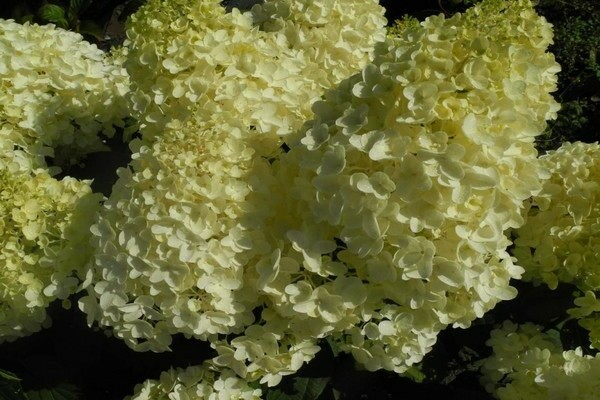 In order to propagate the Silver Dollar panicle hydrangea, you can use one of three vegetative methods. The simplest of them is considered to be cuttings, the material for which can be easily obtained in the process of planned pruning of bushes. Sections with a length of 15 cm or more are suitable for the role of cuttings: they should be rooted in containers with nutrient soil, and after a year they will be ready for transplanting into open ground.

Another breeding method for hydrangeas involves the use of layering. For this, the longest lower shoots are suitable, which are cut approximately in the middle (where there are buds). A match is placed in the resulting incision, and the shoot itself in this place is placed in a depression in the ground and covered with soil. Layers need frequent and abundant watering, since before the arrival of the first frost, they must form independent roots. During the winter period, they remain in the parent bush, they can be separated only with the arrival of spring and the establishment of warm weather.

The least popular method of propagation of the Silver Dollar hydrangea involves dividing a voluminous and well-grown bush during its transplantation.

As mentioned above, pruning is extremely important for giving hydrangea bushes an attractive appearance, as well as for their health. Formative pruning is done in the spring, before sap flow begins. During this procedure, it is necessary to cut off all dry and damaged shoots, as well as those branches that grow inside the crown of the bush. You cannot cut off last year's shoots, since it is on them that the inflorescences will appear later. Only old branches are subject to shortening - this will allow them to branch and form new shoots.

Autumn pruning is sanitary in nature and is intended to lighten the crown - if this is not done, there is a high probability of damage to the stems under the weight of the snow accumulated on the branches. 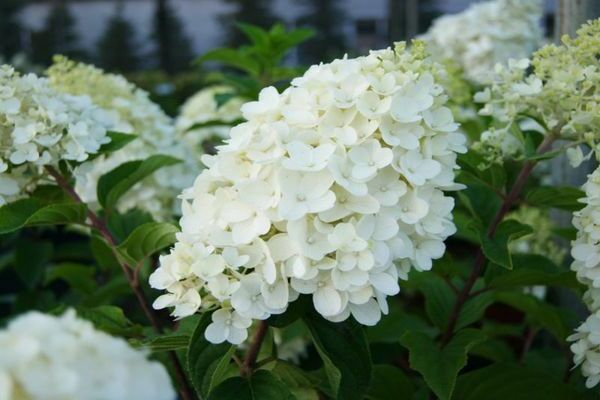 The lush and dense white inflorescences of the Silver Dollar hydrangea look equally impressive both in the composition of the compositions and in the case of single plantings. This variety will cope with the role of an accent due to its high decorative qualities.

The hydrangea variety Silver Dollar on the trunk looks advantageous in combination with undersized plants of a contrasting red color, or softer pink and lilac shades. In the first case, vivid compositions are created that attract attention.A softer color scheme serves to create a background.
However, the neighborhood of the panicle hydrangea Silver Dollar with tall plants will be no less successful and impressive. So, lush white bushes will be a worthy company for tall coniferous crops with their strict contours and deep colors.

Hydrangea of ​​the Silver Dollar variety is a beneficial combination of an unpretentious nature with high decorative qualities, which makes this shrub a favorite of domestic gardeners.

Samson carrots: TOP reviews, ALL the secrets of growing with a photo

Biological features of sea buckthorn: which ones? detailed description 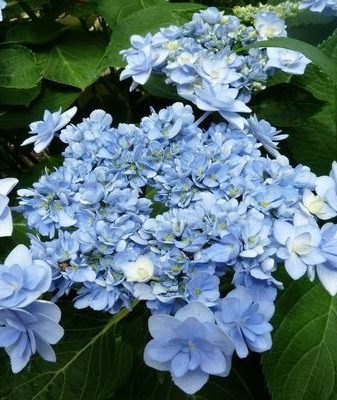 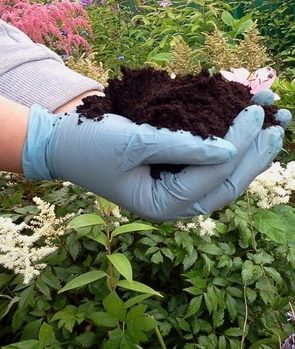 Soil for hydrangea.
A flowering hydrangea bush in your garden will undoubtedly become the center of the composition and the subject of your ... 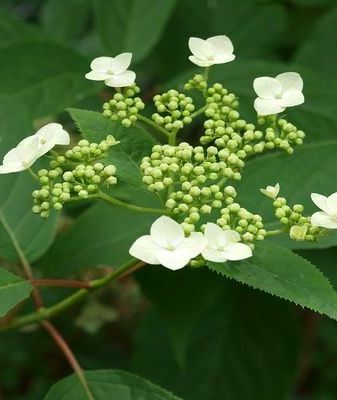