Florists and landscape designers around the world appreciate hydrangea bushes for their spectacular appearance, combined with a rather unpretentious nature. The variety of varieties of this plant is impressive - today the number of varieties has reached 600. Not so long ago (2014) a variety was born that quickly won the sympathy of gardeners, called the large-leaved Hydrangea Schloss Wackerbarth, which translates as "Castle Wackerbarth" ... The original color of its inflorescences, which changes during the season, quickly made this variety of chameleon hydrangea extremely popular. Landscape designers and gardeners use this versatile plant to create herbal compositions, either as a solo accent or as a pot culture. This article will discuss how to competently and effectively care for Schloss Wackerbart hydrangeas in order to ensure their lush and long flowering. 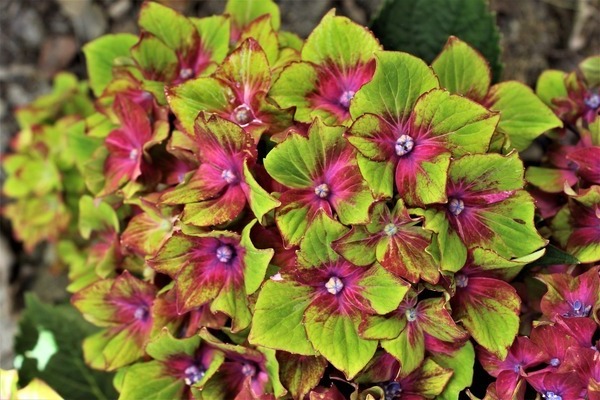 The large-leaved hydrangea of ​​the Schloss Wackerbart variety belongs to ornamental perennial shrubs. The average height of this variety is about 1.3 m, and the crown diameter can reach 1.2 m. Thus, in an adult state, the hydrangea of ​​this variety is a rather voluminous round bush with large leaves and a widely branched root system. The shoots of the large-leaved Schloss Wackerbart hydrangea are generally straight and strong. In the first year of life, they have a green color and a herbaceous structure of tissues, later they become woody and covered with gray bark. The average length of shoots grown in open ground is 1 m, although specimens are known that grow up to 2 m.When grown in a container or pot, the length of shoots rarely exceeds 1 m.

Bright green large leaves up to 15 cm long have pointed tops and edges covered with denticles, as well as a noticeable central vein. They are located opposite and are attached to the stems with petioles.

The flowering period of the Schloss Wackerbart variety hydrangea in central Russia is distinguished by its duration: its beginning occurs in mid-summer (July), and flowering ends in October, shortly before the arrival of the first autumn frosts. The carriers of hydrangea inflorescences of this variety are last year's shoots, which is typical for this plant. However, there is a feature peculiar to this particular variety - inflorescences are not formed on all annual shoots, but only on those that have developed from the apical buds of older shoots.

The shape of the inflorescences resembles a hemisphere, the diameter of which ranges from 15 to 25 cm. The inflorescences of the Schloss Wackerbart hydrangea are always quite dense and lush, consisting of a large number of medium-sized (up to 5 cm) flowers with 4 slightly pointed leaves. The color of the flowers that form the inflorescences of the Schloss Wackerbart hydrangea tends to change throughout the season. At the very beginning of the flowering period, the blossoming flowers have a greenish tint. Gradually, their core turns crimson, and the base of the leaves turns blue. Thus, a dark blue "eye" is formed in the center of the flower. The saturation of the blue color depends on the acidity level of the soil on which the Schloss Wackerbart hydrangea grows - the higher it is, the brighter and deeper the shade of blue on the petals.Outside, the edges of the petals acquire a yellow color, which, as it approaches the end of the flowering period, is replaced by green with a light green tint. The main surface of the petals also turns green, so that their general gamut is filled with various shades of green.

During the fruiting period, bolls filled with tiny seeds form on the Schloss Wackerbart hydrangea bushes. 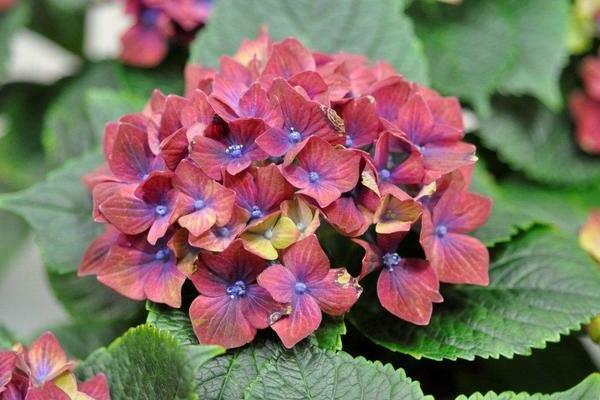 The optimal time for planting Schloss Wackerbart hydrangeas in open ground is dictated by the climatic characteristics of a particular region. So, in the northern regions, it is recommended to plant this ornamental shrub in the spring. In central Russia and in southern regions with mild winters, autumn planting in open ground is also permissible.

Bright sunlight and direct rays can adversely affect the flowering of the Schloss Wackerbart hydrangea, so experienced growers recommend choosing slightly shaded places for planting it. The penumbra is also suitable for growing this variety of hydrangeas. It should be borne in mind that a through and gusty wind is a danger to this crop, therefore, its plantings should be sheltered from its effects. As for the composition of the soil, you should avoid calcareous soils, which the hydrangea does not tolerate. But slightly acidic soils, especially well moistened and nutritious, are ideal for growing it. Despite the moisture-loving nature of the hydrangea, care should be taken to drain the site to avoid stagnation of moisture in the soil.

A place for planting hydrangea seedlings "Schloss Wackerbart" is prepared in advance: it is necessary to dig planting holes with dimensions of 0.3m * 0.3m * 0.3m, located at intervals of at least 1 m. Adult bushes can grow up to 1.2 m in diameter, therefore, too close placement of seedlings should be avoided. The day before planting, you need to place a nutritious soil mixture in the holes, which is quite simple to prepare yourself. To do this, it is enough to mix peat and humus and add about a third of a bucket of the resulting mixture to each hole. Then the planting holes must be spilled abundantly with pre-settled water, rainwater is also suitable.

When planting, the seedlings do not need to be too deep - their root collar should be flush with the ground. It is recommended to cover the soil around the seedlings with a layer of mulch, which will prevent rapid evaporation of moisture and dry out of the soil, as well as the germination of weeds. The thickness of the layer should be about 6 cm; peat and sawdust are suitable for creating it. Mulch remains throughout the season, periodically it needs to be moved away from the lower shoots of hydrangea bushes. 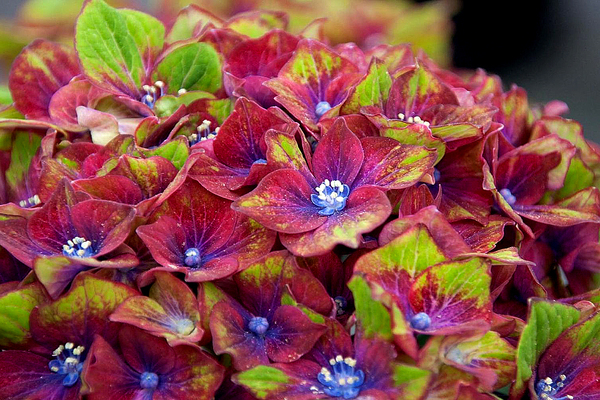 Hydrangea of ​​the Schloss Wackerbart variety is distinguished by rather high growth rates, resistance to winter cold, and resistance to various diseases. Caring for it does not require much effort and generally meets the needs of all other representatives of this culture. The necessary procedures are watering, soil cultivation, which consists in loosening, weeding and mulching, as well as fertilizing.

The irrigation regime, which is optimal for the normal growth and development of the Schloss Wackerbart hydrangea, involves this procedure at least once a week. Water consumption is from 15 to 20 liters for each instance. If the summer is rainy, the amount of watering can be reduced to 1 time per month.

Loosening and weeding the soil in the beds with hydrangeas will protect the plants from weeds, as well as saturate it with oxygen necessary for the root system of plants. It is recommended to loosen the ground at least 2 times during the summer, deepening the inventory by 5-6 cm.You can reduce the amount of weeding, as well as retain moisture in the soil, using a layer of mulch, consisting of peat, needles, bark, sawdust. Also, mulching allows you to maintain the level of acidity of the soil necessary for hydrangeas.

Fertilizing will allow the hydrangea bushes to bloom more profusely and for a long time. It is recommended to feed the Schloss Wackerbart bushes as follows:

Hortense Schloss Wackerbart: how does it winter?

After the fertilization of the soil in the beds with hydrangea is completed, watering also stops, which contributes to the establishment of flower buds. At the beginning of autumn (September), hilling of the bushes is carried out (about 0.2-0.3 m in height). In regions with harsh winters, as well as where there is little snow, it will not be superfluous to take care of the shelter of the hydrangea bushes. If the winter temperature usually keeps below -18 degrees, it is recommended to cover the soil in the beds with peat, sawdust, fallen leaves. 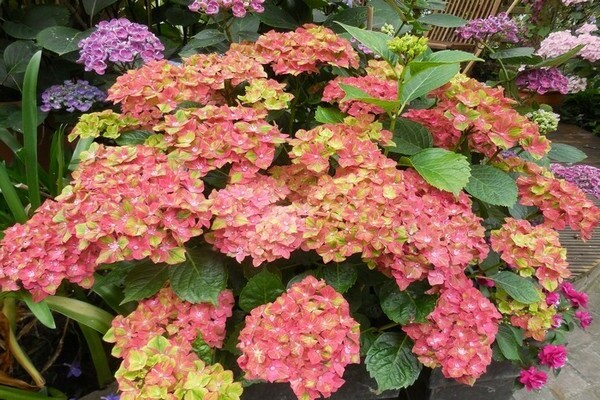 The Schloss Wackerbart variety of large-leaved hydrangea combines high decorative qualities and a character resistant to adverse environmental conditions. Its unusual color allowed it to quickly gain popularity among gardeners. Observing simple agrotechnical recommendations, even a novice florist can grow these lush shrubs on his site.

Garden in an unusual style: how to create an original garden at home! 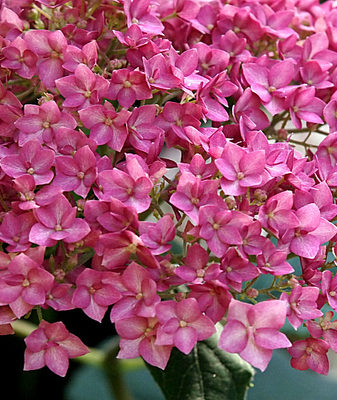 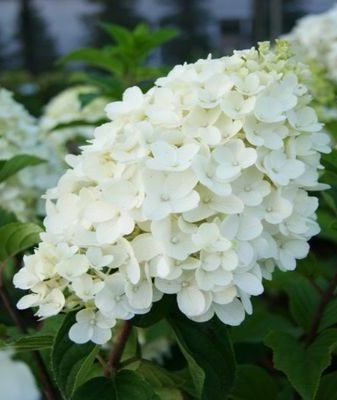 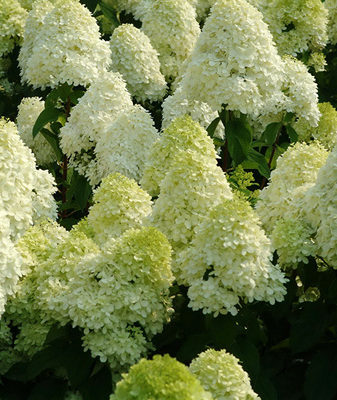 Hydrangea Selection
The popularity of hydrangea has increased significantly in recent years: its lush inflorescences continue ...
×