Growing watermelons in a greenhouse.
487

Growing watermelons in a greenhouse.

As follows from many sources, watermelon is a melon culture, i.e. grown on melons. Translated from Persian, "melon" means nothing more than a garden or vegetable garden. So, despite the seeming exoticism, watermelon is quite a garden and vegetable garden culture. Well, there are simply no garden crops that our gardeners could not grow. And even the fact that in a number of regions watermelons can only ripen in a greenhouse does not frighten those who want to grow this berry. Growing watermelons in a greenhouse - read on how to properly grow melons in your greenhouse. 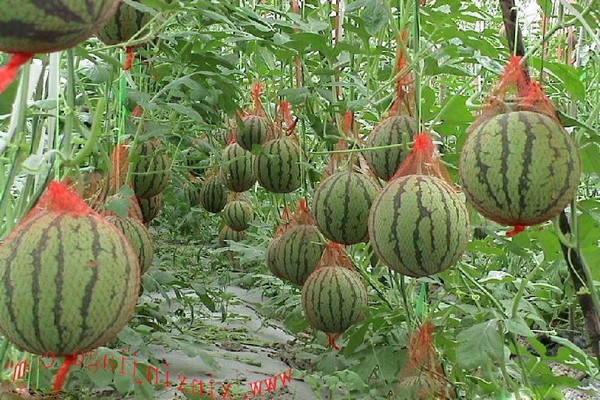 Having decided to grow watermelons in a greenhouse, you need to start by choosing seeds, since not every variety is suitable for this purpose. So, the probability of fully ripening under these conditions is only in early varieties, the breeding of which also took into account the climatic features of the region. For example, according to the reviews of gardeners of the Central strip, the Urals and Siberia, who practice growing watermelons in a greenhouse, the varieties Ogonyok, Pannonia F1, Krimstar F1 and Krimsot Sweet showed good results. For the same reason, experts do not recommend choosing varieties with large fruits, since they have a longer growing season and require growing conditions close to the natural environment for melons.

When purchasing seeds, you should pay attention to the date of their production and choose those that have been produced recently. As a rule, they have a higher germination percentage. 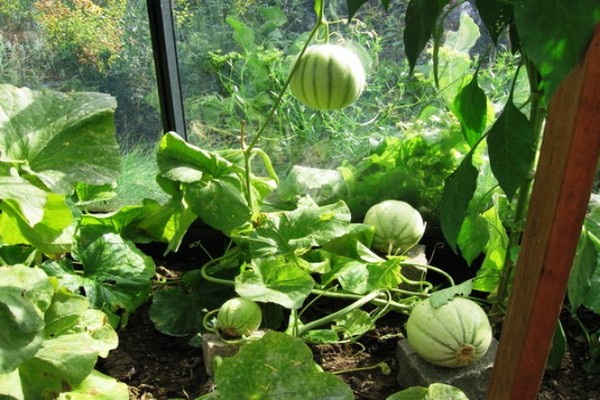 Greenhouse watermelons, however, are more often grown in seedlings. After all, if you wait until the optimal conditions for sowing seeds are established in the greenhouse, even watermelons of early varieties are unlikely to have time to ripen.

They start growing seedlings about a month before planting them in a greenhouse. As a rule, the seeds are sown in mid-April.

Before sowing, the seeds are selected by immersing them for a while in a saline solution. To prepare the solution, dissolve a teaspoon of salt in a glass of water. Those of the seeds that floated to the surface are thrown away, and the rest are washed under running water and, for no more than 30 minutes, placed in a manganese solution. After the specified time, the seeds are washed again and poured into a glass of warm water, where they will germinate. Some gardeners add special preparations to the water - immunostimulants, so that the seeds hatch faster and then go into growth. This usually takes no more than two days. During this time, you can prepare a soil mixture for sowing. To draw up a mixture optimal for growing watermelon seedlings, you need to take one part of fertile land and three parts of high-quality humus. Add a tablespoon of nitrogen and potassium fertilizers, 3 tablespoons of superphosphate and a teaspoon of potassium sulfate. All of the listed mineral fertilizers are especially necessary for plants at the initial stage, for their proper growth and development in the future.

For growing seedlings, ordinary plastic bottles, or other containers, at least 10 cm in diameter, are quite suitable. The seeds are carefully placed in the soil, deepening no more than 2 centimeters. Lay the seeds on their side for better germination. This should be done very carefully so as not to damage the hatched sprouts. Seedling containers are kept in a room with a temperature of at least 20-25 degrees. In addition to maintaining the temperature regime, it is necessary to ensure the duration of daylight hours at least 12 hours.Therefore, it may take some time to light up the seedlings, otherwise, the plants will be weak, pale and will begin to stretch.

By the time the seedlings are planted in the greenhouse, each plant should have at least three true leaves. 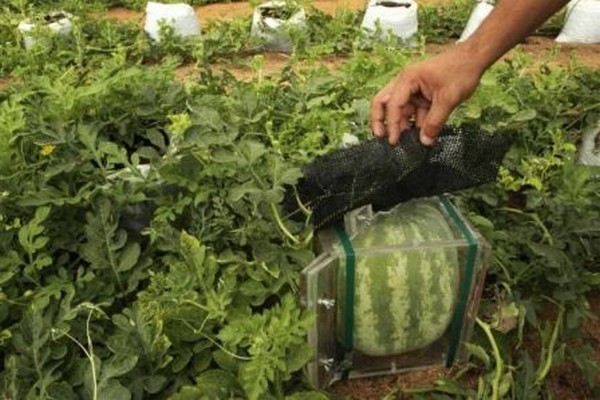 According to gardeners, a polycarbonate greenhouse is the best option for growing watermelons. An important parameter when choosing a greenhouse is its height; it should be at least 2 meters. Watermelon wattle, which will begin to stretch rather quickly, will have to be attached to the trellis so that the shoots, with the ovaries formed on them, receive the required amount of light. Small trellises will not allow you to fix the shoots in such a way that the plant is fully illuminated, and the lack of light will accordingly affect the yield.

7-10 days before disembarkation, the top layer of the earth is removed, approximately, on the bayonet of a shovel. Well-dried hay mixed with humus is laid out in its place. Nitrogen-containing fertilizers are poured on top and all this is properly spilled with water. After that, the bed is covered with previously removed earth and a black film is laid, which will contribute to a faster heating of the earth. A week will be quite enough for the soil to warm up to a temperature optimal for planting watermelon seedlings. 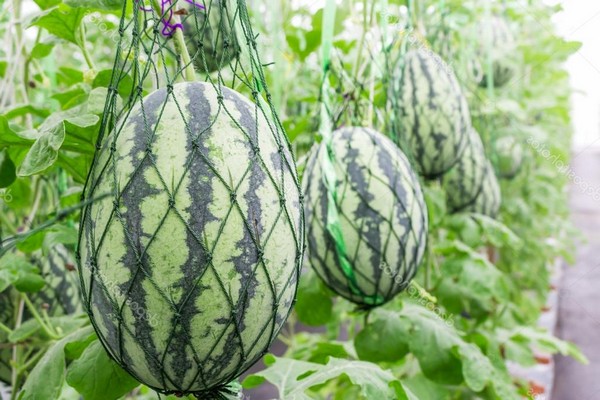 Planting seedlings and caring for plants.

Seedlings are planted from the end of May. The landing holes are staggered. The distance between plants should be at least half a meter. It should be remembered that you cannot plant more than three plants per square meter. Planting depth should be no more than 10 centimeters.

Experts recommend transferring plants from seedling containers into holes along with a lump of earth. With this method, the root system is not damaged, the plant will take root faster and begin to actively gain green mass. When planting, it is not necessary to deepen the plant too much. The earth ball should protrude slightly above the soil surface. After planting, the plants must be watered. At first, at least at night, it is advised to cover young plants with special material. If the greenhouse is heated, this may or may not be done. 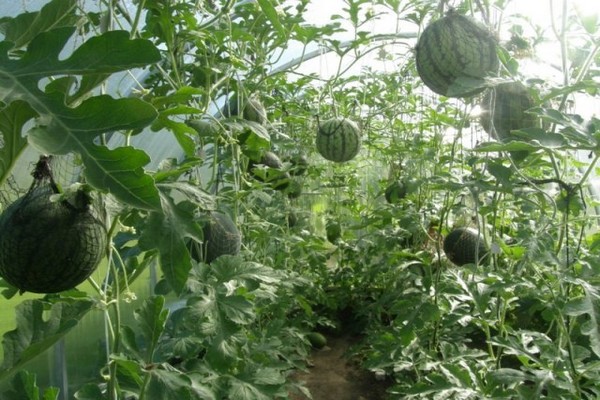 Before flowering, watermelons are watered several times a week. Watering is carried out in the evening, if possible, with warm water. A ten-liter bucket of water is enough to water 7-9 plants. Further, the number of waterings is reduced and, subsequently, they are combined with top dressing... The opinion that the watermelon needs constant watering is wrong. It is a drought-resistant plant, and excess moisture can lead to cracking of the berries and a deterioration in their taste.

Water the plants so that moisture does not get on the leaves. In addition, condensation must not form in the greenhouse. High humidity can lead to diseases, rot and attract pests. The humidity level is regulated, as a rule, by the frequency of watering and the ventilation of the greenhouse.

At least three weeks should pass from the moment the watermelons are planted in the greenhouse until the first feeding. By this time, the length of the lashes will be 20-25 cm. The second time, fertilizers are applied at the stage of bud formation. And the last time watermelons are fed when ovaries begin to appear on the shoots. A good fertilizer for watermelons is nitric acid or ammonium nitrate. To prepare the solution, the agent, in an amount of 20 grams, approximately 1 tablespoon, is dissolved in 10 liters of water. The amount of funds per plant is 2 liters.

For fruit to appear, flowers need pollination. If the greenhouse remains open most of the time, this will happen naturally, with the help of insects. 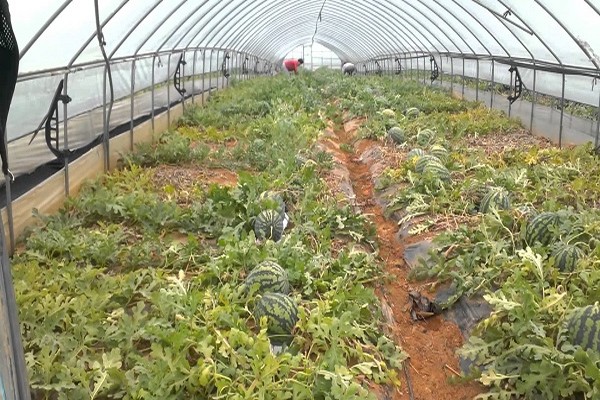 By the way, some sources indicate the need to plant honey plants next to watermelons in order to attract insects and ensure pollination of flowers. However, compared to honey plants, watermelon flowers are much less attractive to bees and other insects. Therefore, the neighborhood with such plants can be harmful.

To be sure of the result, you can simply pollinate the flowers by hand, transferring pollen from the male flowers to the female ones. It is recommended to do this in the morning, at an air temperature of at least +20 degrees. If the day before, at night, the temperature was less than + 12 degrees, then manual pollination will not be effective either.

A couple of weeks after planting the seedlings, you can start the garter to the trellises. Some gardeners recommend tying the lashes only when they are 1 meter long. Part of such a lash is buried in and, after a while, additional roots are formed. Thus, the plant will receive more nutrition.

A watermelon is usually shaped into one stem. Shoots on which there are ovaries are pinched, others are removed. As a rule, no more than 2-5 berries are left. Such a number of fruits can be “fed” by one plant. If the berry develops directly on the ground, then it must be placed on a plank to prevent the appearance of rot. Fruits that form higher, over time, must be placed in the nets, otherwise, under their weight, they will simply fall off, breaking the shoot.

Before you cut the watermelon, you need to make sure it is ripe. And how to do it - of course, knock on it. After all, everyone knows that when the watermelon is ripe, the sound will be muffled. This is explained as follows. The sound depends on the density of the watermelon, respectively, the larger it is, the louder the sound. Ripe watermelons do not gain moisture, because the tail through which it came in has already dried out in the ripe fruit. That is, day after day they lose moisture and their density decreases. Therefore, in fully ripe watermelons, the sound is not so sonorous.

The color of a watermelon can also tell you how ripe it is. So, in a ripe watermelon, the stripes are slightly yellowish, and not white.

In addition, do not rush to remove the watermelon if less than 4 days have passed since the last watering. Experts note that dry fruits are stored better.

Cutting off the watermelon, you need to leave the stalk. The collected fruits are stored in cardboard boxes, lined with thick paper.

Obviously, it is possible to grow watermelons without even living in the southern regions. With just a little effort, you can proudly display the world's largest self-grown berry. 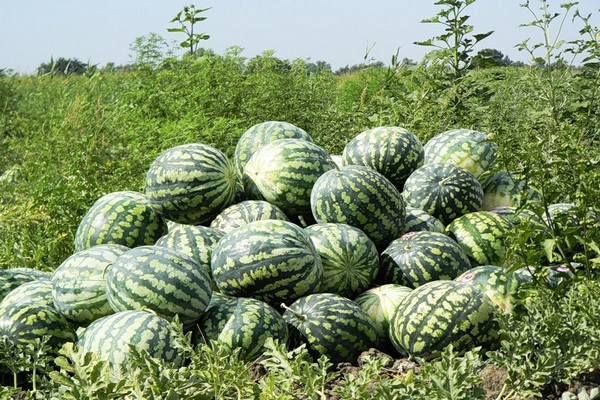 Tomato Cream: general characteristics of the group of varieties, varieties