Vesennik belongs to flowering perennial plants, belongs to the Buttercup family. The genus includes 7 varieties. In translation, Erantis means a spring flower. In the wild, it can be found in the countries of Southern Europe, Asia. The cultivation of the spring plant has been going on since 1570.

Vesennik: description of the plant 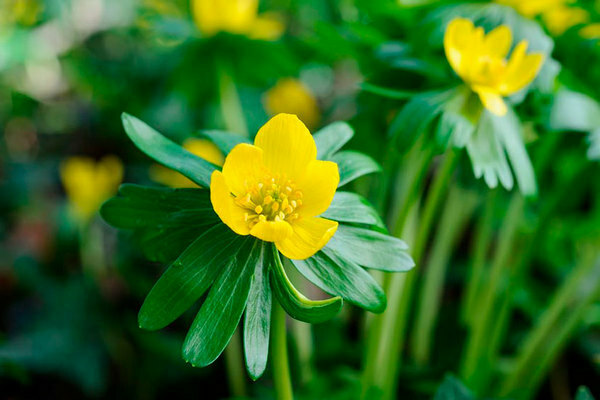 Vesennik is a flowering herb with a thickened tuberous root system. When you notice that the first flowers have appeared on the plants or after the end of flowering, you will notice the appearance of 1-2 basal leaf plates in the plants, which differ in a finger-divided shape. The length of the spring flower spike can be up to 25 cm, they have single flowers. The flowers can be seen in the open state only in the daytime, but if the weather conditions are rainy or already in the evening, the flowers begin to close, thus protecting the stamens and pistils. The whorl is located under the flower itself, which has a large stem leaf plate, which is distinguished by a deeply dissected shape. the flowering period lasts 15-20 days. The fruits of the spring tree look like accrete leaflets, which have a flat shape and have seeds that are distinguished by an olive-brown tint and an oblong-ovoid shape.

Growing a spring from seeds

It is best to plant spring seeds in the autumn, immediately after you collect them. You can do this procedure in the spring, but then stratification should be carried out. To do this, the seeds will need to be placed in a container, inside of which there will be moistened sand, after which they are removed to the refrigerator for storage. From time to time, the sand will need to be moistened, as well as shaking the container. You will need to store it for 2 months. If you sow spring seeds before winter, natural stratification will occur. A lighted or partial shade place is suitable for planting. Choosing a low-lying place is also not worth it, because the seeds can die under the ice. The soil should be moist, light and slightly alkaline. The seeds need to be planted in the ground to a depth of about 5 cm. The first seedlings of the spring plant can be noticed already in the spring, but in the first year of life, the plant will have several cotyledonous leaf plates, although even they will die after a certain period of time. You don't need to think that the plant is dead. The thing is that the plant directs all its forces to produce the formation of small nodules that look like clay lumps. Next spring, you will see the appearance of a real sheet plate. Young plants need to be dug up and planted in a new, permanent site, while maintaining a distance between plants of about 6-8 cm. It is important to carry out all actions before the end of August. Most often, the plant begins to bloom 3 years after planting. If you plan to plant the dug nodules in open ground in the spring, you can store them in moistened peat or sand, which will help protect the plant from drying out. Also, the spring plant is characterized by reproduction by self-seeding.

After 2-3 years after planting, the spring plant will have a well-developed rhizome, so this time is ideal for reproduction using tubers.Division should be performed after the flowering period ends, but until the leaf plates die off. Tubers need to be removed from the soil by capturing the rhizome, then gently separate the daughter nodules and divide the rhizome into several parts. Places of cuts must be processed using crushed charcoal, after which nodules and cuttings must be planted in open ground in a permanent place, laying to a depth of 5-6 cm, the distance between plants must be kept about 11 cm.You can not plant in 1 hole more than 3-6 nodules. Before planting a plant, the soil must be well moistened, add a little substrate, in which you can find a combination of broadleaf wood ash and compost or humus. 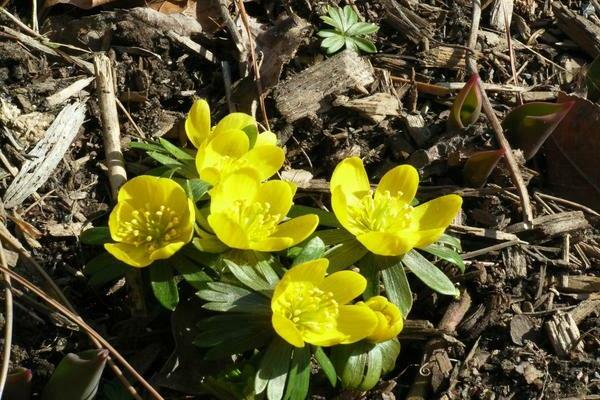 Vesennik does not need watering, since in spring the soil has a lot of moisture, and in summer the plants are dormant. If, during planting, you applied all the necessary fertilizers, then you should not re-fertilize. you only need to carry out the procedure for loosening the soil in time, as well as weeding, which must be carried out even after the foliage dies off. It is not necessary to transplant a spring plant for 5-6 years, then it can become lush and beautiful. But after this period, the plant needs to be transplanted and divided. But, it should be remembered that the spring plant is poisonous, for this reason, planting should be carried out in a place that will be far from the animals from children.

Due to the content of the poison in the plant, it independently provided protection against various rodents and pests. if moisture accumulates in the soil for a long time, this can lead to the appearance of gray mold on the roots. To avoid such a situation, you need to take a number of measures that will help remove excess liquid from the soil so that the root system is not harmed.

We take care of the plant after flowering ends.

After flowering in plants ends, the dying off of its aboveground parts does not immediately begin. After that, the plant is immersed in a dormant state. Vesennik is distinguished by a good degree of frost resistance, for this reason, the plant does not need shelter for the winter period.

Varieties and varieties of spring

As we said a little earlier, the plant has several varieties, but we will consider exactly those that are particularly popular. 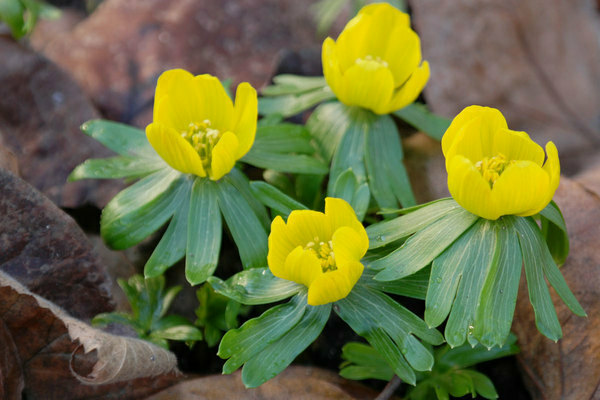 The homeland of the winter spring is Southern Europe. In the wild, it prefers growing on mountain slopes, as well as in forest areas under a deciduous tree. Underground rhizomes are distinguished by the presence of nodules. The leaf blade is hilar. Leafless peduncles can be up to 20 cm long. The six-petaled flowers have a yellow tint, under them are dissected bracts, which are particularly spectacular. the flowering period begins at the end of winter, flowers peek out from the snow cover. The leaf blade appears later than the flowers. Flowering ends in late May - early June, after which the aboveground parts of the bushes begin the process of withering away. The species has good frost resistance. The following varieties have earned particular popularity: 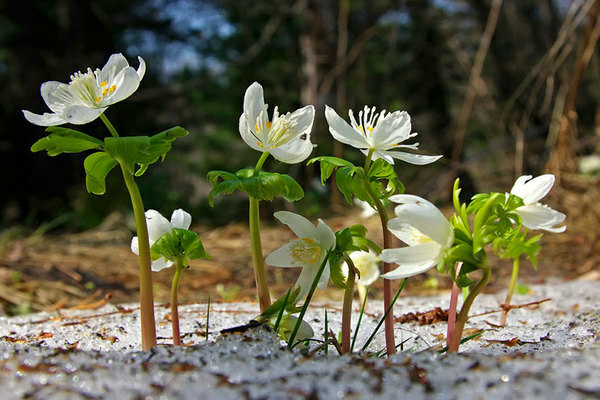 Siberian spring plant grows in the regions of western and eastern Siberia. The bush has a compact size, tuberous. After flowering ends, dying off very quickly occurs. Single straight shoots are not very tall.The bush is distinguished by the presence of only one basal leaf plate, which has a finger-split shape. Single flowers are white. Blooming of flowers occurs in May, the end of the growing season is in June. 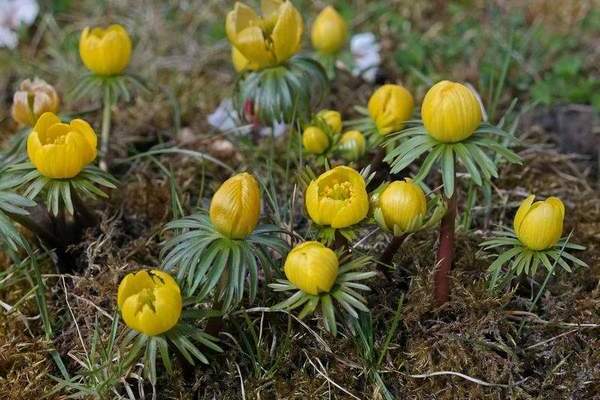 In the wild, the plant grows in Greece and Asia Minor. The length of the bush does not exceed 10 cm. The variety has large flowers. The leaf blade is deeply and finely dissected, has a violet-red color. The stem leaf plate is also dissected into narrow cavities. Flowering occurs half a month later than in the wintering species, while flowering does not differ in activity. Has moderate frost resistance.

The homeland is considered to be Central Asia. It resembles a winter spring, but it does not differ in its special height. It can be up to 25 cm long. The flowers are yellow in color. Flowering occurs in May. 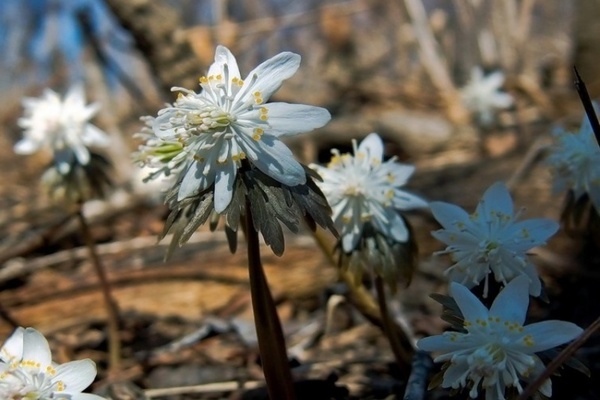 The homeland is the Far East. The bushes can be up to 20 cm long. It is a herbaceous, perennial plant, with 3 basal leaf blades. The leafless shoot is distinguished by the presence of a white flower; at the bottom, the petals have a violet-bluish tint. Star spring grows well in shady areas. The flowering period begins in April

Belongs to the Japanese species, the flowers are white, the nectary is yellow, the stamens are blue. This spring plant is distinguished by its hardiness, but it is still preferable to grow it in a greenhouse.

Top dressing of cucumber seedlings after germination: cucumbers will be plump 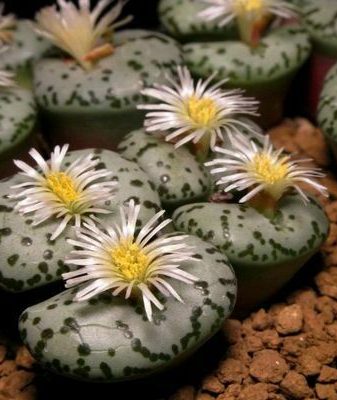 Conophytum
Conophytum description Among the large number of succulent vegetation, in particular you can ... 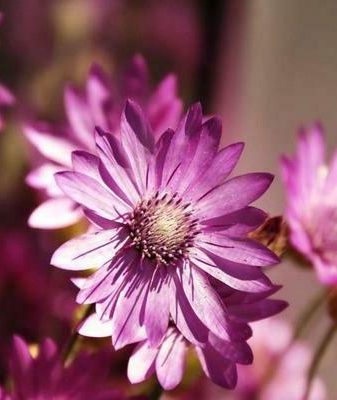 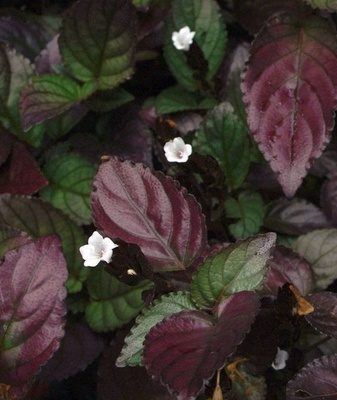 Hemigraphis flower
The special beauty of some flowers makes them stand out from many others. Unusual leaves of Gemigraphis ...
×