Thuja under an exotic and aristocratic name Golden taffett Is an ornamental plant that can make any landscape design unique and unusual. First of all, Golden Taffett is famous for having very unusual needles. Its color changes depending on what time of the year comes, and what kind of weather prevails in the place where the bush grows. In summer, the bush (which, by the way, is also very compact, dwarf) has a very beautiful golden color, but when frost and winter come, the bush turns into a rich orange color. Therefore, this plant can be called not evergreen, but rather evergreen. 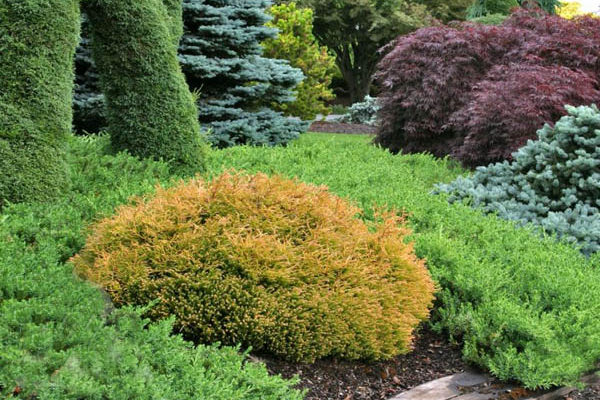 This shrub is really very miniature - a dwarf. In the Moscow region, the height of Golden Taffett barely reaches thirty centimeters, but the width of the crown can be more than one meter in diameter. The crown of the plant is spherical, consists of twigs that hang down very aesthetically. From this, the plant looks even softer and more pleasant. It does not require any special care measures, and in this article we will dwell in more detail on how to plant a bush correctly, as well as take care of it in order to prevent diseases or attacks from pests. 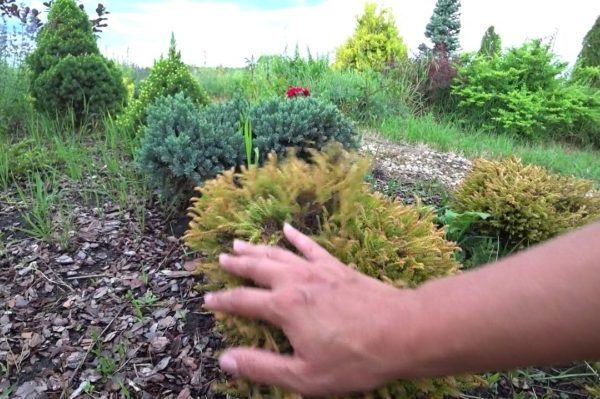 Thuja western Golden Taffett is just perfect for planting a bush using cuttings that have a so-called "heel". You can also propagate bushes of this variety by dividing. Shrubs under the age of two years must be regularly hilled, but already in the autumn it is customary to divide them. If we are talking about the method of grafting, then the planting material must be cut off with the onset of a stable spring, when the plant wakes up with nature, and the soil begins to warm up. Also, a signal that the bush has woken up, and you can cut it, are the buds that appear. Cuttings can be cut in summer, but at the same time there is a risk that by the onset of the first frost they will not have time to take root and adapt to open ground, since the frost resistance of the Golden Taffet thuja is relatively low.

In order for the plant to be successfully fixed, it is better to plant it not immediately in open ground, but first place it in pots. They are also left there for the winter, but the room should be very warm for this, so that the plant is as comfortable as possible. In principle, there are no special remarks, and this also applies to leaving.
It is worth noting that when planting cuttings, there are several basic rules that must be followed in order for the plant to safely strengthen and give growth to the extent that it should grow in accordance with which variety it belongs to. These rules are as follows: 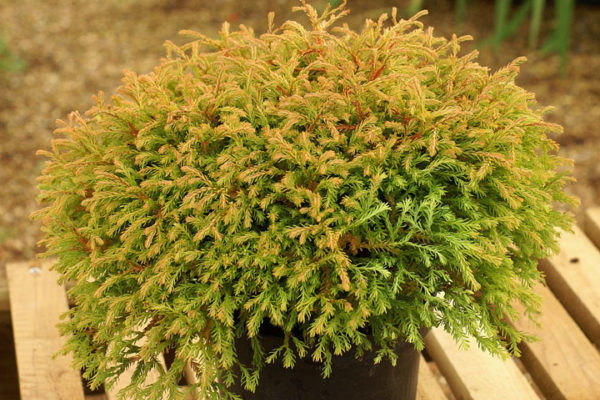 After planting has been carried out, the cuttings need good watering with warm, settled water. It is also recommended to mulch the trunk circle. You can use bark or wood chips as mulch, or you can mix peat with sawdust or straw. The layer of mulch should be abundant - about six centimeters at least. This will not only retain moisture, but also protect Golden Taffett from attacks from various pests.

In general, these are all the rules that are best adhered to if we are talking directly about planting a thuja. Of course, initially it is very important to select only healthy and viable planting material, if thuja are purchased in specialized nurseries. There should be absolutely no damage on them, the plants should look alive, without rot, scratches, any signs of disease. The root system should be placed in an earthen coma, then it will be much easier for the plant to root in the new conditions of open ground. 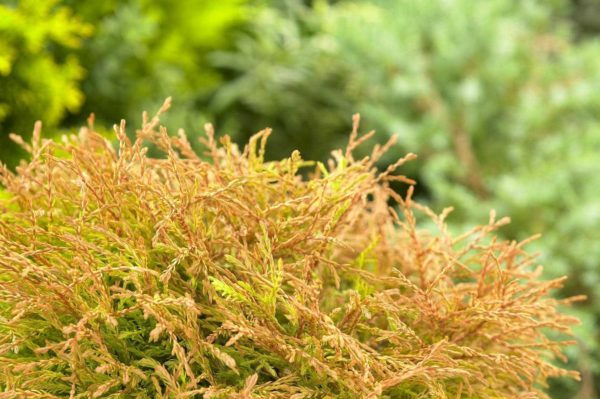 Even despite the fact that the thuja of the Golden taffett variety is, in principle, not capricious and unpretentious, if we are talking about care measures, it is still necessary to study the characteristic features and characteristics of this variety. The gardener will still have to devote some time to the shrub to get a full-fledged healthy plant. As a rule, one of the most important conditions is to water the bush. Golden thuja refers to those plants that respond very positively directly to moisture, this applies not only to the soil, but also to the upper, green in our case - gold) part of the shrub. In the first year after the thuja was planted in open ground, it must be watered very often. But in the next years, it is worth developing a system, and giving the plant moisture about once a week, if the weather is dry.

If the soil around the trunk is covered with a mulch layer, moisture will evaporate from the soil much more slowly. For this reason, in principle, Golden Taffett can be watered a little less often. But nevertheless, it is worth monitoring the climatic, temperature conditions, the level of precipitation, as well as the speed at which the topsoil can dry out.

Top dressing is the second point to which it is so important to pay attention when caring for a plant. Like any other plants, thuja is in great need of mineral components and nutrients, thanks to which the plant's immunity, its general condition, and also its appearance will improve. For the first time, it is necessary to feed the bush from April to May. It is necessary to apply nitroammophoska, as well as some complex fertilizers, which will provide comprehensive support to the plant. If we talk about the October top dressing, then ideally potash dressings are suitable, since potassium has an excellent effect on plant growth and the development of the root system.

Of course, thuja also needs pruning, mainly sanitary. It is necessary to remove painful, dried-up branches from the bush, which will no longer give any growth results, and can significantly worsen the external characteristics of the bush itself.Formative pruning of thuja Golden taffett bushes is also needed, but in this case only so that the bush takes a spherical shape, which is its hallmark. In general, this variety of thuja is an excellent plant, which, moreover, can perfectly tolerate severe frosts without losing its vitality and growth.

Even despite the fact that the thuja of this variety practically does not lend itself to attacks from pests and is practically not prone to diseases. But still, sometimes a plant can get sick, since no crop can be 100% protected from pests and bacteria, both fungal and viral. If thuja weakens the immune system, if all the necessary trace elements and nutrients are not supplied to its system, then the risk of developing diseases such as fusarium, brown shute, gray rot.

Western thuja Golden Taffett: description of diseases of the variety 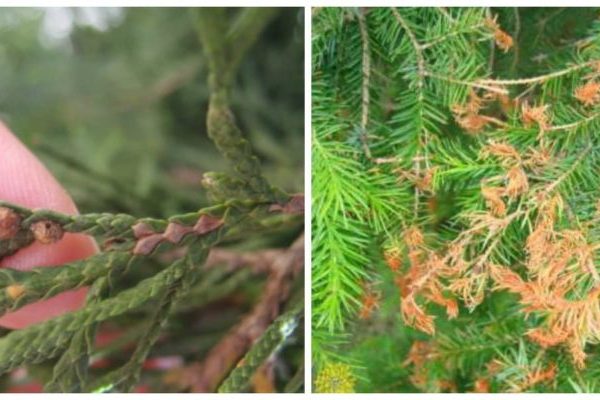 Fusarium Is a fungal disease that usually affects the root system of a plant. In order to cope with the disease, as well as in preventive measures, it is recommended to use Fundazole solution. It is prepared in accordance with the instructions that are attached to each package of the drug.
Brown shute Is a disease that can mainly affect the needles of a plant. It is best to use copper sulfate or iron sulfate to fight the disease, as well as to carry out preventive measures. The solution is prepared in accordance with the instructions, it must be used very carefully.
Gray rot - This is the decay of the trunk, which begins inside, and then very quickly is transferred throughout the plant system. Both the needles and the root system suffer, after which the plant may simply die. In order to cope with gray rot, it is necessary to regularly inspect the bush, as well as use a solution of copper sulfate, since it is today that it is recognized as the most effective remedy for combating gray rot, and not only on thujas, but also on many other crops.

Pests can also attack thuja bushes. As a rule, among the most important enemies of the thuja Golden taffett, one can distinguish the berry bug and the thuja aphid, as well as the false shield and the gray leafworm. If pests massively attack thuja, then it can lose its beauty and decorative properties. In some cases, if the gardener notices too late that the plant is attacked by pests, the thuja may simply die, and they will not have time to save it. To prevent this from happening, it is recommended to carry out preventive and health-improving treatments of the plant with Actellic or Engio preparations. Also today, a number of analog drugs of these funds have been withdrawn, which are in different price ranges, but at the same time are still effective and even necessary.

Thus, thuja Golden taffett in landscape design will look very beneficial. The bush looks very good if you use it to decorate rocky or heather gardens, to decorate alpine slides. Thuja is also suitable for building a hedge with its help both on a personal plot and in a park for general public visits. The bush blends harmoniously with flowering plants, both tall and short.

Peas: 6 most important rules for growing!

How to pick currants: time and rules for picking berries 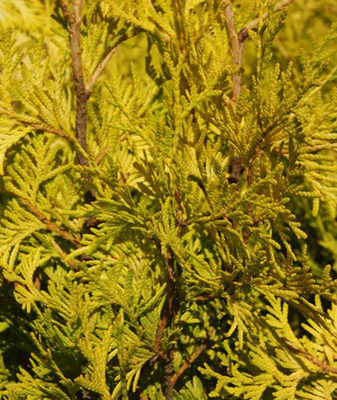 Thuya Yellow Ribbon
Today we will tell you about another representative of the Cypress family. Namely - about thuja yellow ... 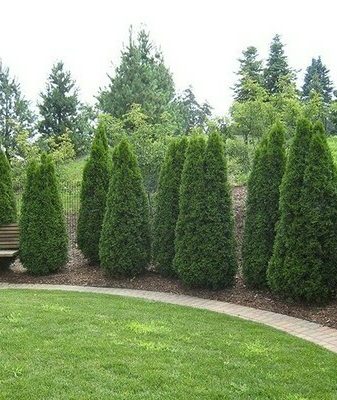 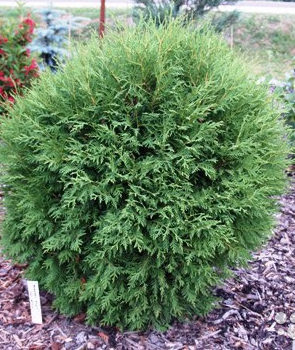 Tuya Little Champion
Thuja is an ideal bush that is great for decorating ...
×