Why lilies don't bloom, how to prevent the problem
693

Why lilies don't bloom, how to prevent the problem

The article covers in detail the question of why lilies do not bloom, methods of preventing the problem are considered.

For all their sophistication and aristocracy, lilies are one of the most unpretentious flowers. They sprout amicably, bloom luxuriantly and rarely get sick. But sometimes problems still arise: the lilies, which last year so delighted you with their stunningly beautiful flowers this season, did not produce a single bud, only a stem with foliage. What could be the reasons for the lack of flowering and how to solve the problem - we will talk about this in this article.

Why lilies do not bloom: the impact of the quality of planting material 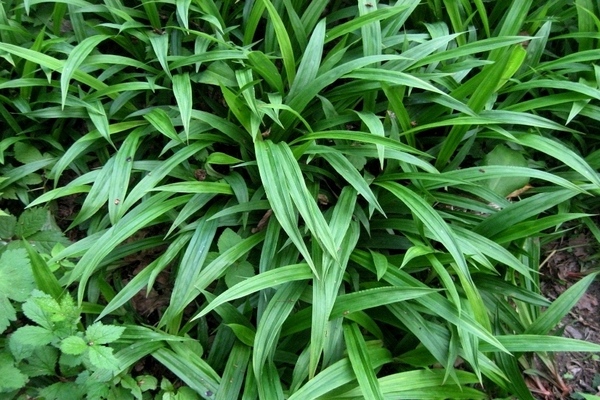 Why lilies do not bloom: the impact of the quality of planting material 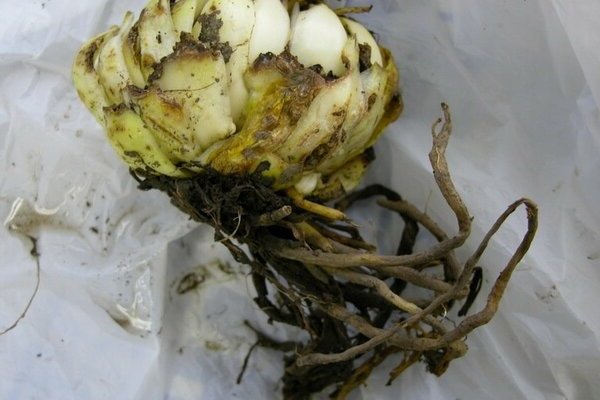 When purchasing lily bulbs, carefully inspect them, since not only the flowering of a given plant depends on the quality of the planting material, but often the health of your garden - a diseased bulb can infect the soil and neighboring plants, which in turn will spread the disease further, etc. The bulb should be dense, dry, without signs of mechanical damage and traces of mold and rot on the bottom. Ideally, buy such planting material on the eve of planting, but if you have to worry about storage, then place the bulbs in the refrigerator in the vegetable compartment, after putting them in a bag with sawdust.

In the first year after purchase and planting, bulbs that have dried out during storage may not bloom, but they will delight you in the second year. You will also have to wait for flowering from not large enough specimens - they will take time to grow and gain strength, in this case, you just have to wait.

Why lilies do not bloom: the influence of the landing site and neighbors 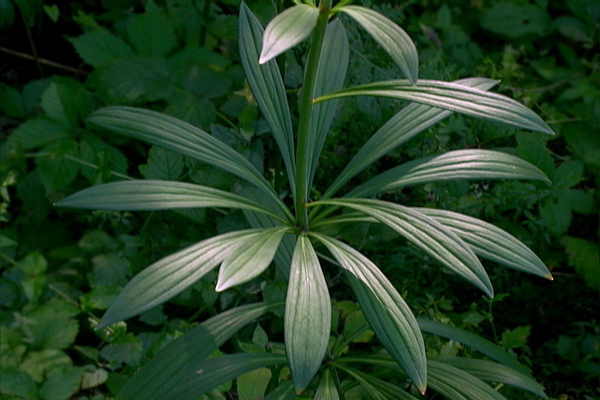 Why lilies do not bloom: the influence of the landing site and neighbors 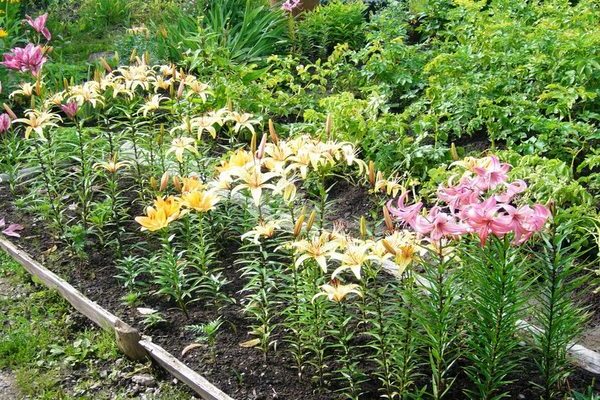 When choosing a place for planting, keep in mind that the lily prefers a sunny place, but allows the presence of partial shade - you can plant it surrounded by other tall flowers and not very large shrubs. But if you spot lilies nearby in large trees that cast a lot of shadow and have a strong root system, then most likely they will not bloom. In such conditions, lilies do not have enough sunlight and nutrients.

Why lilies did not bloom: unsuitable soil 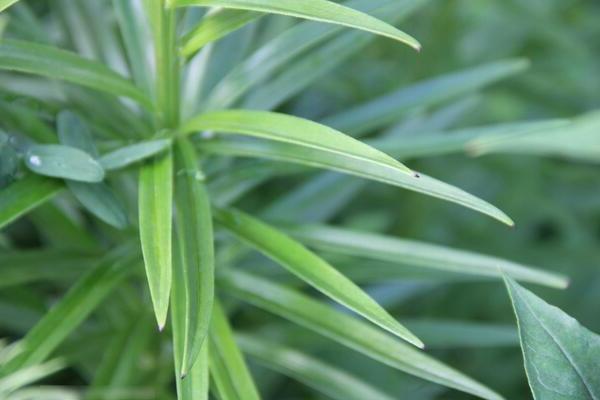 Why lilies did not bloom: unsuitable soil 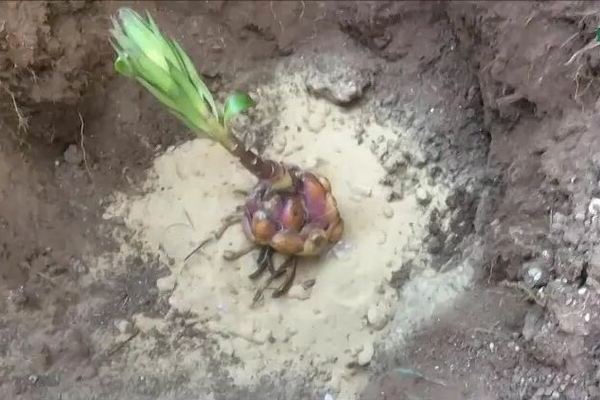 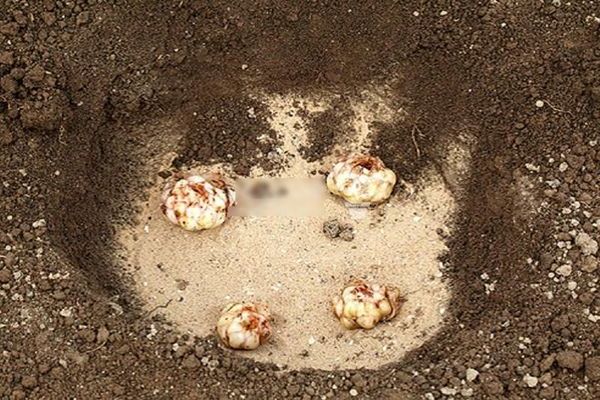 Each plant grows better in fertile soil, so the quality of the soil can also be the reason for the lack of flowering. If your site is predominantly clayey soil, then keep in mind that the flower bulbs can simply rot. Therefore, when planting, it would be good to provide a drainage layer, and add sand to the hole so that the soil becomes looser.

If you fertilized the site with fresh organic fertilizers, then lilies in this place can be planted only after a year.

And remember that the planting depth of any bulb is three times its height.

Transfer to a new location

Lilies grow wonderfully in one place for five years, during which time they take all the necessary nutrients from the soil and grow. Due to the large number of bulbs, the flowers become smaller and smaller, and then cease to appear altogether.

The optimal time for transplanting lilies is the end of August or September, one month after they have faded.After flowering, the plant takes time to complete the growing season; you can only dig out the bulb after the stem is completely wither.

If you are just planning to buy and plant lilies - get any of the Asian hybrids, they are less capricious, you can transplant them at any time convenient for you. In addition, they tolerate the unpredictable winters of the middle lane well and are the most resistant to diseases.

Sometimes the absence of flowering indicates a lack of nutrients, therefore, 3-4 times during the summer, lilies must be fertilized. For feeding, it is most convenient to purchase a complex mineral fertilizer containing nitrogen, phosphorus and potassium. Lilies respond very well to feeding with ash - add it to the hole during planting, and also water the plants with ash infusion.

But fresh organic fertilizers cannot be applied under the lilies, this can lead to the development of fungal infections.

Lilies will not bloom if you cut the stems too early last year. As we already said, after the end of flowering, the vegetation process continues, which means that for photosynthesis the plant needs both a stem and leaves, only this way it will gain strength to overwinter and form full-fledged buds next year. You can cut off the stem only after it has completely faded, and this will not happen earlier than a month after the end of flowering. If everything is done on time, then next year there will be no questions about flowering.

Why lilies do not bloom: what to do if they are affected by diseases, insects

A plant weakened by disease or pests will certainly not bloom. Blooming can be prevented by "rosette" - while the stems thicken and turn yellow, as well as "penicellosis", in which rotting from the bulb spreads to all parts of the plant. If the source of the disease is a decaying bulb, then in most cases it is useless to treat the lily, the diseased plant must be removed and burned, and the soil in this place must be disinfected.

Of the harmful insects, one must be wary of the lily fly, spider mite, bear, squeak, hoverfly and other pests. Many problems can be avoided by choosing high-quality planting material, and by timely treatment with fungicides and insecticidal preparations.

Flowers require your attention no less than vegetables or fruit and berry crops, so if you want to have a beautiful, lush garden, you will have to devote enough time to them. Observing very simple rules for caring for plants, carrying out timely prevention, you most likely will never encounter lily diseases or lack of flowering.

How to grow ageratum correctly - reproduction and care