Black cohosh daurian is a medicinal plant that gained fame in ancient times, but to this day research is being carried out to study all its useful properties. The North American Indians used this herb as a remedy for many diseases. The leaves of the plant emit an unpleasant odor that drives away bedbugs, which influenced the choice of the name for it. The scientific name of the tsimtsifuga consolidated this property, since from the Latin language it translates as "bug" and "drive".
When using Black Cohosh to improve health, it is important to remember about contraindications, therefore, before using it, you must familiarize yourself with the safety rules and follow them. 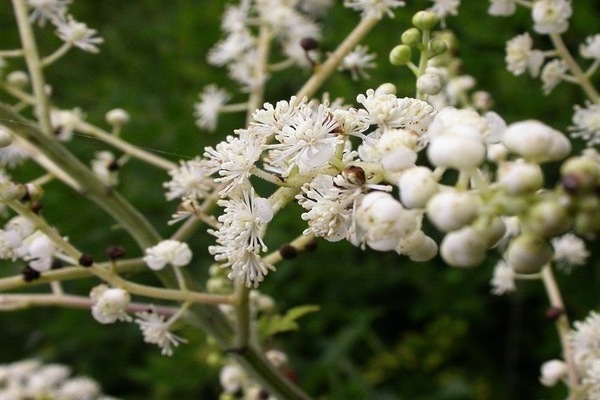 Dahurian black cohosh belongs to the perennial crops of the Buttercup family. In natural conditions, they can be found on the territory of Asian countries and North America.
It can also be found in Russia on the territories of Transbaikalia, Khabarovsk Territory and on the shores of the Sea of ​​Japan. It grows in valleys, meadows, glades on which mostly dry soil, it can be found growing next to shrubs and as ornamental plants in the local area.

That perennial plant is unpretentious, survives in any conditions, is highly resistant to frost and grows for 25 years.

Black cohosh grows 2 meters in height. Its roots are powerful, thick, branched, strongly fibrous and multi-headed. Large increments, they join together and dieback occurs for a long time. The roots are dark, almost black.
Stems are powerful, and long, rounded. And they are racemose inflorescences collected from a large number of small-sized flowers with shades of green, white and pink. They are composed of 4 pairs of sepals, 5 petals and numerous stamens. Black cohosh Daursky does not show the beauty of its flowers all at once. First, they open from below and gradually move upward. When the sepals fall off, the inflorescences become very attractive. The plant blooms in about 30 days, beginning in July or August. In the flowers, seeds are formed of small sizes and a scaly shell. The seed surrounds a flat fringed petal.

Black cohosh Daurian has large dissected, pinnate leaves, the length of which reaches 70 centimeters. They can be painted in light green, dark green and even brown colors. In autumn, sometimes, changing their color to yellow, they do not become less attractive. Those leaves that are located at the bottom of the stem hold long petioles with pointed lobes, those that are at the top are small in size or are completely absent.

The most popular is the simple type of black cohosh, Daurian and racemose. 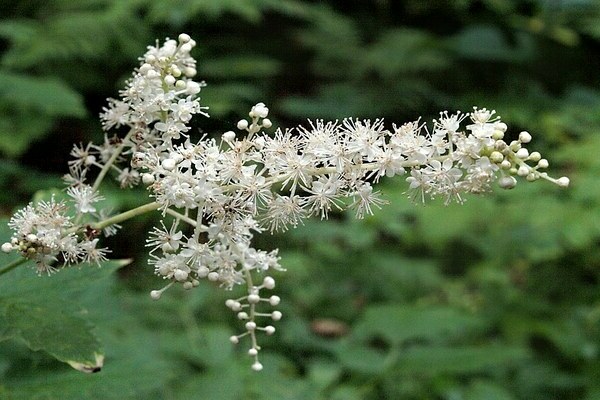 The Daurian black cohosh has been known for its healing effects for a long time, but despite this, they have not yet been fully studied. The rhizomes of this plant contain a large number of useful elements:
Tannin - This tanning extract kills bacteria and has an astringent effect. Stops blood, binds heavy metals with toxins;

Due to the content of glycosides, the plant has a beneficial effect on the work of the heart, reducing the frequency of its contractions and increasing the force of cardiac output;

The salicylic acid content makes the plant an anti-inflammatory, blood-thinning agent. It has been proven to reduce the risks of diseases such as stroke and heart attack;

Phytosterol is a plant equivalent similar to cholesterol in structure. It maintains the state of cells while being in their membranes. It lowers the level of cholesterol harmful to the body.

The roots of Clopogon daurian contain a group of nitrogen-containing organic compounds of natural origin, hespyridic acids and methoxycinnamic acids.

Black cohosh dahurian contains many trace elements that are important for human health:
The content of selenium, which has a powerful antioxidant effect, helps protect against free radicals;
Iron is an additional supplier of oxygen to organs and their systems;
With the help of calcium, the skeletal system, the nervous system are strengthened and affects muscle contraction;
Magnesium is beneficial for the nervous system, improves brain activity, and promotes the formation of new cells. 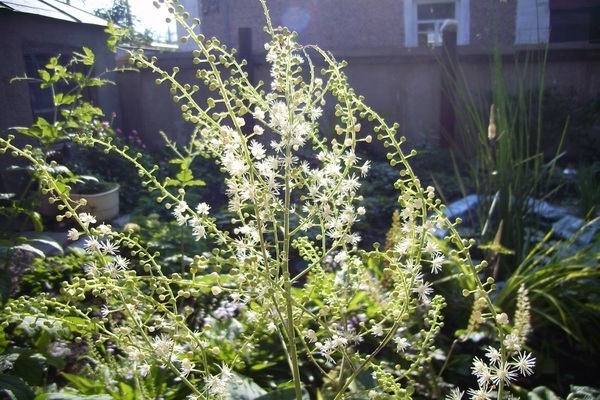 For medicinal purposes, the roots of Black Cohosh are used, dug out in the last days of August or in the first days of September. They are washed, cut into pieces, wilted and dried. Raw materials are used for the preparation of infusions and tinctures, which, in turn, have a positive effect on the health of the body:

Medicines containing black cohosh in the composition are used to combat diseases such as:

Such drugs are used to treat sexually transmitted diseases and they also provide emergency assistance in the event of a snakebite.
To get rid of a toothache, from a rash during measles, restore the mucous membrane in the mouth if ulcers appear there, relieve fever, a powder made from the root of the plant will help.
Black cohosh Daurian contains substances that stimulate the development of estrogens. This is what caused the use of plant-based preparations for the treatment of gynecological diseases. They are used to correct and improve women's health, help stabilize the menstrual cycle and help with pain during menstruation. In case of prolapse of the uterus or rectum, a powder is also prescribed.

Black cohosh Daursky: use as a folk remedy 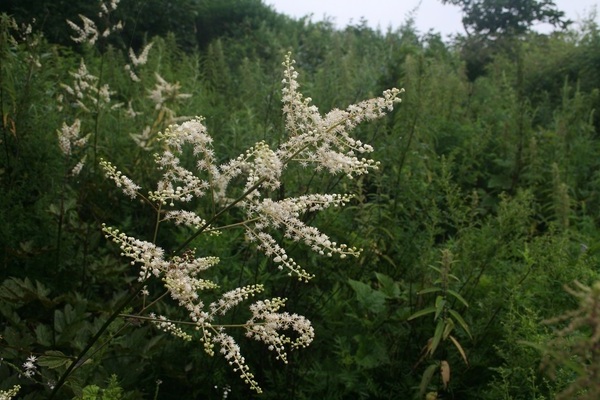 Black cohosh daurian is very bitter in taste, for this reason traditional healers do not prepare teas from its raw materials. It is used for the preparation of tinctures, decoctions and syrups.
The tincture is prepared as follows:
Prepare one spoonful of the rhizome of this plant, pour it into a glass jar, add 200 grams of 70% alcohol there and remove for 7 days in a cool and dark place. From time to time, the solution must be shaken by shaking the container.
If you suffer from rheumatism, insomnia, hysteria and neuralgia, then to restore health, you need to dilute 30 drops of the infusion in water and take it three times a day. Black cohosh has a good effect on people with hypertension and cardiac asthma. The duration of the course is from 30 to 45 days.Before taking such infusions, you should talk to your doctor.

For the manufacture of syrup, it is necessary to dilute the powder -50 grams in boiling water-500 ml. Boil it for two hours over low heat, stirring constantly and strain. Further in 500 ml. 500 grams of granulated sugar is added to the solution and cook until it completely and evenly dissolves.

Dahurian Klapogon syrup is used for diseases such as: neuralgia, hypertension, inflammation of the oral mucosa, as an antidote if the herb of scopolia is ingested. For the treatment of these diseases, it is necessary to take under a teaspoon of syrup 5 times a day. The use of the drug is possible only after consulting a doctor.

To relieve joint and muscle pain, a bandage is applied, which is moistened in a decoction from the rhizome of the plant. The dry root is mixed with a little water and boiled over low heat for one hour. Compresses are done for 20 minutes.

With the help of infusions, you can help with diseases such as: gastritis and enterocolitis. It is quite simple to make it:
It is necessary to mix a glass of water with 5 grams of herb and boil for 5 minutes. Let it brew for one day and strain well. In this case, as in all others, the application is possible only after talking with a doctor.

Black cohosh is not a toxic plant, no matter how long it is taken. This fact has been proven thanks to research carried out by scientists and a long history of using this plant as a therapeutic agent. An individual reaction and a number of contraindications may become the reason for not allowing it to be taken.
The list of contraindications includes: pregnancy and lactation, age up to three years, allergy to aspirin, strokes, thrombosis and seizure activity.
You should be careful when taking black cohosh in conjunction with drugs that reduce blood pressure and thinning the blood, as it will increase their effect.

Taking hormonal drugs, you should also talk to your doctor before using.

Taking black cohosh in powder form, it is important not to exceed the maximum single dose of 200 mg, and no more than one gram per day.
Side effects may include: migraine; slow heart rate; constipation; dizziness; increased sweating; nausea; vomit; decreased vision.

Despite the not too beautiful name, black cohosh is a very useful plant with many excellent medicinal properties, used many centuries ago and have not lost their importance in modern medicine. It is important to follow the rules and doses when using the plant, as well as remember the contraindications and take into account the side effects. Well, so as not to confuse the name, you can remember that the Germans gave the plant the name "silver candle" because of the beautiful flowers located on it.

Pepper Gogoshary: characteristics and description of the variety + photo of Gogoshary

Ageratum in the garden: everything you need to know about planting and care 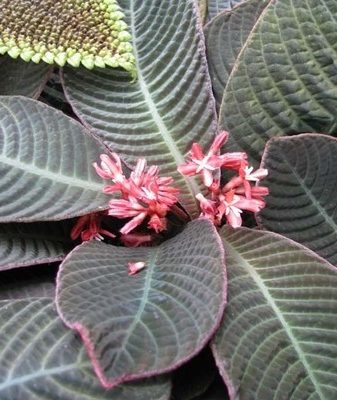 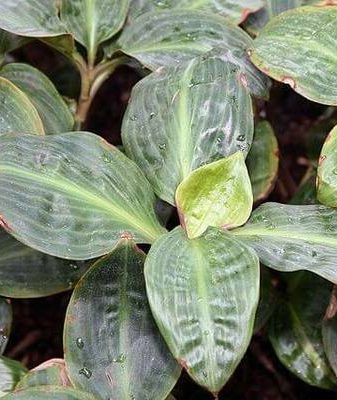 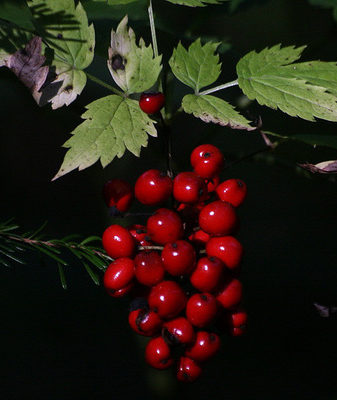