Volzhskaya autumn pear, as the name implies, is a late pear variety. It was bred by breeders in Samara. They bred it by pollinating the Kopylova variety with a mixture of Bessemyanka pollen and elite 94.

Volzhskaya autumn pear: description of the variety and characteristics

The Volzhskaya autumnal pear tree looks differently at different ages. Being very young it has a pyramidal crown. With age, it takes on a more oval and then rounded shape. However, the central conductor is clearly visible, and at any age. The formations on which the fruits grow are called ringlets.

As for the shoots. They are of the geniculate type, grow straight, without deformations, are colored greenish-brown. Leaf buds are small, slightly protruding, and are ordinary, conical in shape.

The leaves are elongated, dark green. Along the central vein, the leaves are folded like a boat, the edges are slightly crenate and slightly wrinkled. The petiole on which the leaf is held is medium in size.

The fruits of the Volzhskaya autumn pear-shaped pear variety, only slightly shortened. Usually, they weigh no more than 110 grams. The fruit should be removed when it takes on a yellow-green hue. A fully ripe pear has a yellow color. There are subcutaneous dots, they are green and scattered over the entire surface of the fetus. The peduncle is curved, arched, of medium length.

Many pears of the Volzhskaya autumnal variety do not have a funnel, but if it is, then it is narrow and very small. The saucer is very deep, riddled with grooves. The heart is shaped like a rhombus. Seeds are elongated with a narrow tip. The fruit tastes sweet and sour, fleshy.

The Volzhskaya autumnal pear variety begins to bear fruit at the age of six to seven, regularly. Fruits ripen by the twentieth of September. The species implies long-term storage, so eating is possible even in the month of November. Under conditions of fruit preservation, pears can lie until the end of January.

Flowering usually occurs in the middle. If winters are overly harsh, fruit formations will be affected. Plus Volzhskaya autumn pears - low damage by scab and fruit rotting as a result of infection with fruit rot.

Hydrangea leaves began to turn yellow - what to do and how to fix it?

How to propagate blackberries: the apical layering method, other methods

Slugs in the garden: how to fight and get rid of? the best means 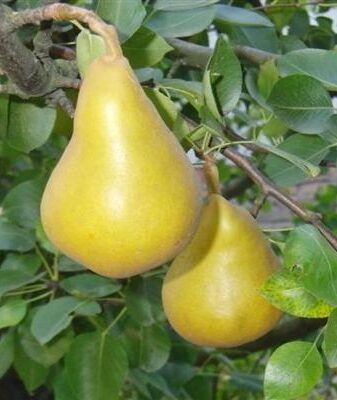 Pear Augustine
Pear Augustinka reaches full ripeness by the end of summer and beginning of autumn, that is, the variety is ...
×