The Horned Violet appeared on the territory of our country in the eighteenth century. It is surprising that its popularity only grew and now it occupies the first places in the list of the most famous ornamental plants. Nowadays, plant breeders are actively cultivating this herbaceous plant in their living quarters on the windowsills. 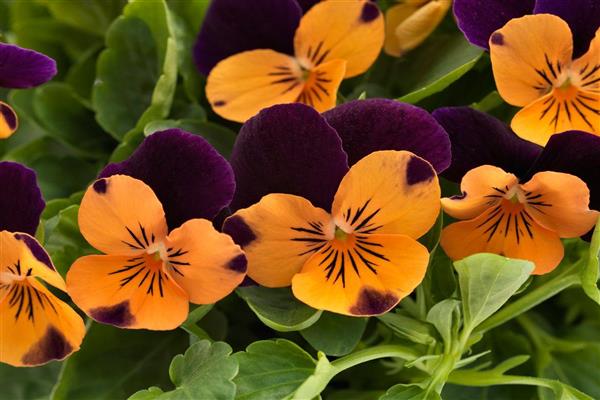 This herb is considered a plant that has been growing for several years; it is considered to be in the Violet family. In common people, you can hear how the violet is called viola, because the word itself is translated from Latin as "Violet". In height, the herbaceous reaches from eight to twenty-four centimeters, this is directly influenced by the variety of the plant. Flowers in a single copy have an unobtrusive smell, and also slightly elongated petals, similar in appearance to small moths. The herbaceous diameter can reach up to five millimeters. They are placed on petioles. The foliage of the plant has a bright greenish color and the shape of a regular oval, there are small jagged edges.

In addition, this herbaceous plant has a fairly developed root system, which grows rapidly. In about twelve months, a couple of bushes will be able to occupy an area of ​​two square meters. All the bushes have a large number of flowers, some varieties have sixty copies. So, in the process of flowering, the bush is transformed into a large blooming mound.

On the back of the buds and flowers there is a small growth that resembles a horn in appearance, so this representative of herbaceous crops also bears the name "Violet Horned".

Plants differ in a rather long flowering process, which lasts from the first week of the last spring month and ends in the last weeks of the second autumn month, but the most magnificent and beautiful flowering process for a plant is in the spring season. In the summer season, and especially on hot days, the flowers decrease in size, but by the autumn season they return to their usual appearance.

The color of this representative of herbaceous crops has a large palette. Flowers come in one color, two or three. Stop your choice depending on your preferences. For example, it is possible to get a delicate lilac or bright orange color, or opt for a velvet purple look. 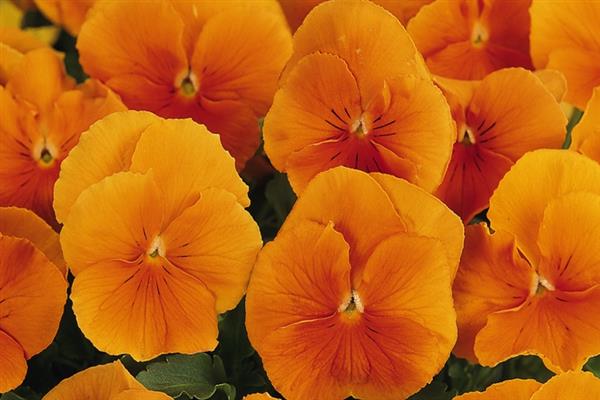 There are many species and subspecies of this representative of herbaceous crops, the differences of which are mainly in color.

This variety feels great in kindergartens. The bush grows up to ten centimeters up. It is covered with a mixture of white and red colors, and their number reaches fifty-five copies. The flowering process continues from the last spring month to the first autumn month. Usually, this representative of herbaceous crops is used to decorate alpine slides or plant them near curbs.

It is recommended to cultivate this herbaceous in a partially shaded place in which the land will be fertile. In height, the shrub most often does not reach more than fifteen centimeters, and its stems can form compacted pads.The flowers are quite large in size, with a reddish color, therefore this variety is sometimes called "Ruby Perfection". In addition, the flowers have the shape of a regular circle. A small bush can grow up to forty - fifty flowers. 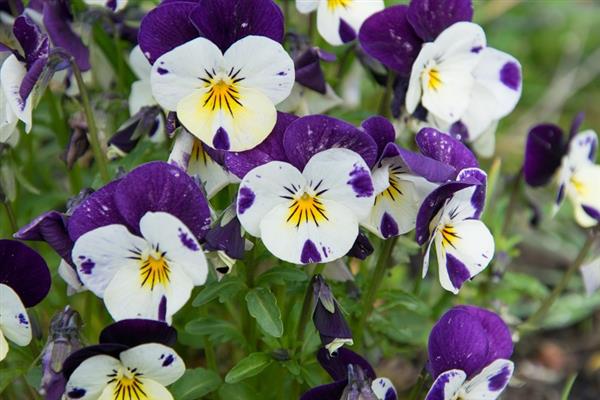 This representative of herbaceous crops is usually used to decorate loggias or gazebos. The flowers are quite small, up to three centimeters in diameter, and can bring joy to flower growers throughout the summer season, and even during May. Herbaceous includes a fairly small bush and can withstand frost wonderfully. In one area, this plant can grow up to four years.

The plant acquired this name because of its pattern, which looks like Gzhel. The bush grows up to eighteen centimeters and beautiful violets are formed on it, the color of which is white and blue. The flowering process continues from the last spring month to the first autumn month. Quite often, the plant is used in a variety of compositions, for example, in the manufacture of alpine slides.

This representative of herbaceous crops is very beautiful, striking with a specific combination of colors. The flowers of this plant on each bush can be snow-white and orange at the same time. The herbaceous itself is rather small, up to ten centimeters up, but in the process of flowering the plant transforms into a flowering carpet. At one moment, up to sixty flowers can grow on a bush.

This representative of herbaceous crops is quite resistant to cold weather. It grows small, up to ten centimeters. The flowers have a regular heart shape, and their color is purple with a yellow spot in the middle. Quite often, in addition to decorating flower beds, the plant is used in garden containers.

In addition to the above varieties, it is necessary to mention: 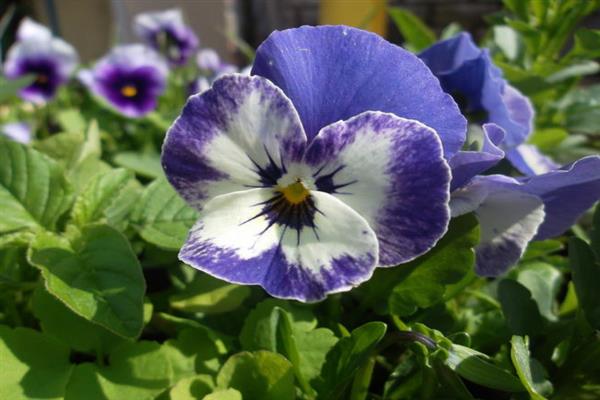 For the cultivation of this plant, the seed method of planting directly into the fresh air or the seedling method is used. The choice of method depends on the preferences of the grower and their employment.

Using this method, it is possible to plant from the last winter month. If this process is performed earlier, then the formation of flowers will be much earlier. For this, fertile soil is useful, which can be bought in all flower supermarkets or made with your own hands. In both cases, the soil must be heated in an oven before planting, and also treated with a foundation solution. This will reduce the risk of contracting fungal diseases.

After preparing the soil, it is necessary to make shallow pits in it and place seeds in them. The space between them should be at least one and a half centimeters. Then the seed material must be covered with soil and moistened using a sprayer.

After that, the container must be covered with a film and moved to a place where the temperature regime will be no more than seventeen degrees. At higher temperatures, seed adaptation is impaired. When the first shoots appear, the containers must be moved to a place with sufficient sunlight, where the temperature should be twenty-one degrees. With the formation of four leaves, it is possible to make seating in separate containers. The space between young seedlings should be at least six centimeters.

It is possible to plant a herbaceous plant in fresh air in the first week of the last spring month.

To cultivate this plant with this method, seed material must be planted from the first week of the last summer month to the second half of the first autumn month.It is recommended to use new seed. Planting is done in the same way as seedling. When the seedlings gain strength, they can be planted in a permanent place. When flowers form, they must be removed so that the herbaceous does not waste energy, which is so necessary in the winter season. For the next spring season, this representative of herbaceous crops will delight you with the flowering process. 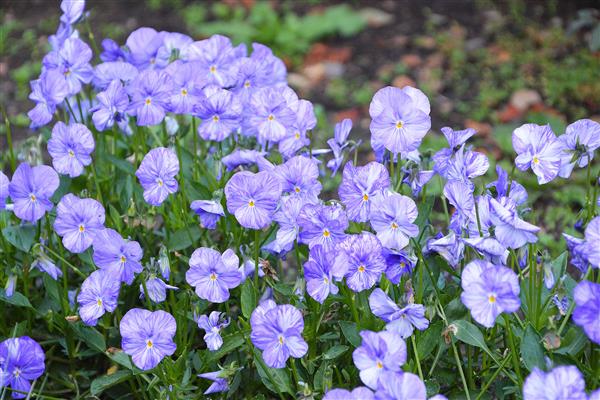 This herb does not require special agrotechnical means, therefore its cultivation does not require a lot of time. It grows on all types of land and is rather quickly divorced. It is recommended to plant the plant in partially shaded or sunny places, but only in the presence of tall grassy ones. When plants are planted in a fairly shaded area, the herbaceous plants will become smaller in size.

Moistening of these herbaceous plants should be in moderation, due to the excellent transfer of especially hot days by the plant, but with excessive drought, the flowers are crushed. The growth of this plant will also stop.

This means that on especially hot days, if there is such an opportunity, it is necessary to spray the grass in the morning and evening hours.

It is worth remembering about feeding. It is necessary to place them in the soil twice a season, namely in the spring, in the process of active growth, and at the end of the summer season. It is possible to use both mineral and organic fertilizing. When using organic feeding, only humus should be placed, but not fresh mullein. With this option, the herbaceous can burn.

It is necessary to prune the bushes, because they grow rapidly, and they lose their beautiful appearance. It is also necessary to remove all wilted flowers, if there is no desire to collect seeds. This plant withstands the winter season well, because it does not tolerate cold weather, but young herbaceous plants must be covered using fallen leaves or spruce sticks. 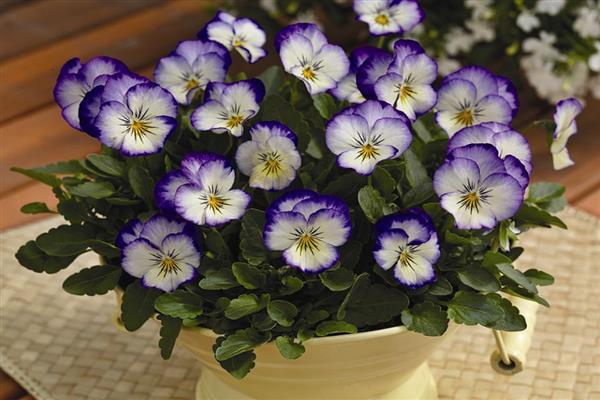 It is possible to breed this plant simultaneously by several methods, which will be presented below.

This method is quite easy and accessible to everyone, including a person without experience in gardening. Herbaceous must be removed from the soil and divided into small parts. All parts must have roots. Then plant the pieces in moist soil in a partially shaded area. These bushes take root within fourteen days.

This breeding is possible from the spring season to the second half of the summer season.

Also a simple breeding method. It is enough to find a single or group shoots and simply attach them to the soil using an object of your choice, for example, an invisible hairstyle. These places are then covered with soil and moistened as needed. After thirty-one days, roots should form, which can be transplanted to a permanent site.

Cuttings can be cooked from the first week of the first summer month to the first week of the second summer month. Their length must reach at least five centimeters and have two knots. Then they must be planted in containers with pre-prepared soil and placed one centimeter deep. Then it must be covered with a film and placed in a warm room. Sometimes it is necessary to moisturize them. After thirty-one days, roots should form, then young grassy ones can be transplanted to a permanent site.

Among the many diseases that are often found in this plant, the following should be highlighted:

If diseases were detected at the very beginning of development, then herbaceous ones still have a chance of salvation.For this, specialized chemical agents are used, but if you have not noticed how the disease was formed, then it is worth discarding the affected herbaceous ones.

This representative of herbaceous crops often suffers from aphids and slugs, as well as violet mother-of-pearl. To get rid of these parasites, it is possible to use methods from the common people, as well as chemical preparations. The most effective folk remedies:

Plants look great in wonderful pots, you can hang them on the loggia or veranda. In addition, with this method it is possible to decorate the courtyard, garden and gazebo.

This stunning herbaceous, as this representative of herbaceous crops, is perfect for cultivation both in summer cottages and outside the city.

Hazel: important tips for planting and caring with a photo