Phacelia or mustard as green manure - which is better?
8 440

Phacelia or mustard as green manure - which is better?

Siderata are equated with more effective fertilizing materials of natural origin. They are planted next to key plants or in a free area. Then the grown greens are cut off and embedded in the ground. Such a moment enriches the earth with nitrogenous compounds, slows down the growth of weeds, fungi and bacteria stop developing. They are quite often used by gardeners who adhere to bio methods of plant care. Siderat is an excellent substitute for chemicals. 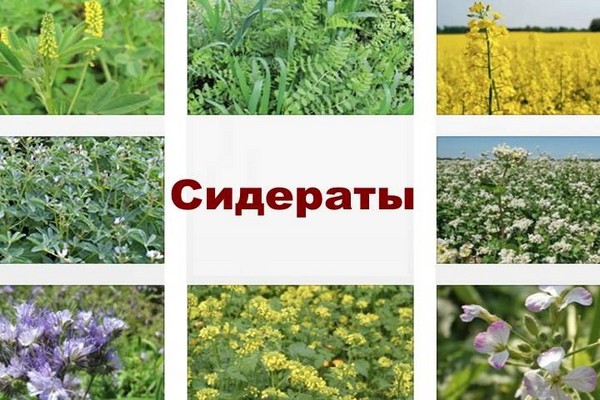 The most commonly used are hydrophiles and cruciferous plants. It is most common to use mustard and phacelia when planting.

Advice: Green manure plants need to be mowed periodically until flowers form, so that they do not grow throughout the site.

The impact of green manure on soil varieties 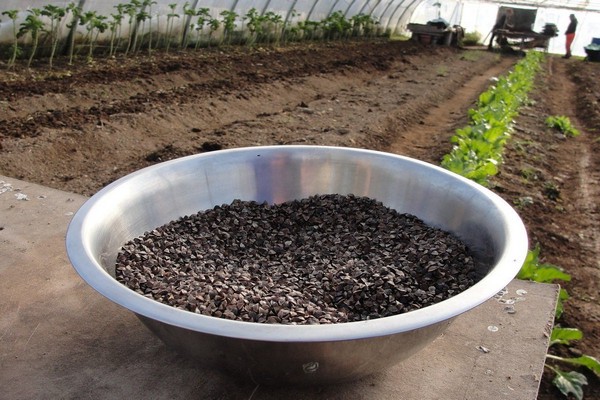 Siderat does the following positive actions for soils:

For certain types of soil, they act in different ways, changing its structure and the level of acid content in it.

Experienced gardeners believe that the soil should be in constant work, so green manure can be planted with plant crops, as well as after harvesting them. 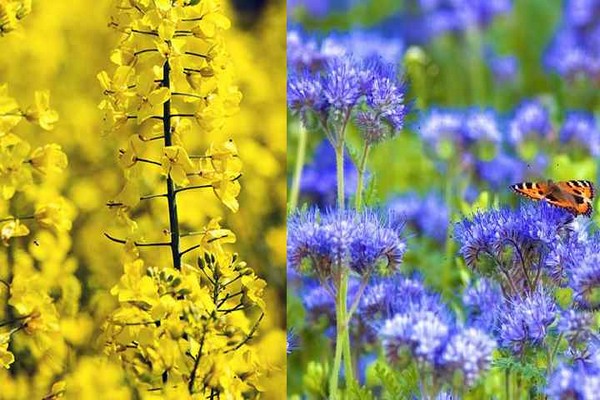 When phacelia and mustard are planted

It is a popular green manure among farmers. The plant is planted from spring to autumn. In spring, green manure is planted after thawing of the snow masses, because the plant culture is afraid of frost. From the moment of planting the seed until the fruit is fully ripe, it takes about 45-60 days. After plowing and mowing, the main plants can be planted after 14 days. The green mass grows very quickly, young plants get a little shade, the weed stops growing.

Important: When mustard foliage grows to the tops of other plants, then it must be trimmed. 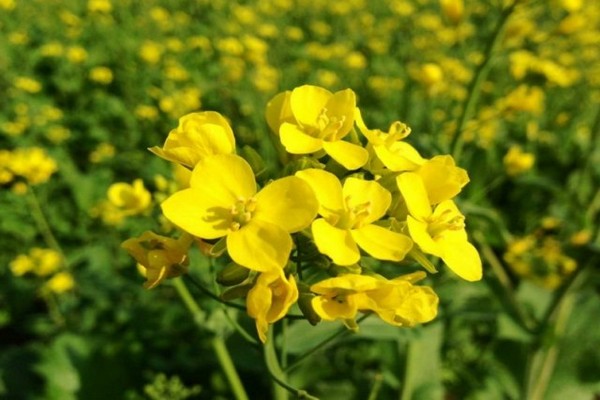 In summer, it is best to plant mustard next to tomatoes, peppers and eggplants, as they do not ripen so soon. Also, the plant can be planted next to potatoes, since mustard fights late blight and scab.

Before the winter period, green manure is planted in early autumn after harvesting all the fruits. The greens of the plant are cut only in the spring. Then it can be simply laid on the ground, as it will be absorbed very quickly by the soil.

The seed is placed in rows with a distance of 15 cm between the rows, it can also be planted randomly.

This is a unique plant culture, next to which other cultivated plants feel great. Phacelia is not demanding in care, is resistant to drought and cold, has a beautiful appearance, and has an active growth rate. Seed is planted in the spring after the snow has melted. Phacelia grows on sandy, clay, peat and rocky soil. Siderat protect the land from the aggressive effects of frost. The plant has the ability to loosen compacted soil, strengthen light soil, and reduce soil acidity.

Important: The plant has a great advantage - it attracts a large number of pollinating insects. 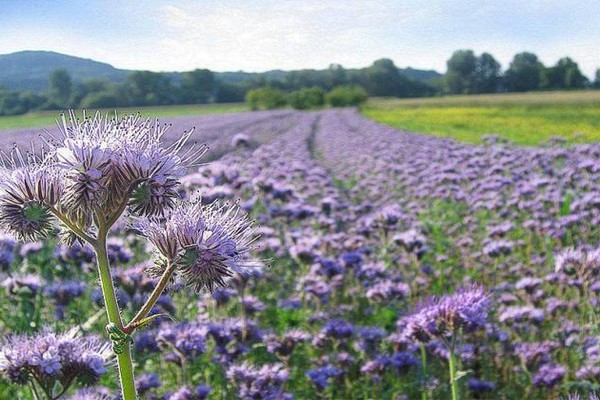 Phacelia tissues contain phytoncidal compounds that prevent the spread of bacteria and fungi in the soil, as well as late blight and scab. Siderat repels moths, aphids, nematodes and wireworms. When phacelia blooms, the greens are cut off 1.5 months after sowing. The green mass must be repaired 10 cm deep. When planting seed, green manure is not removed, since it is able to protect crops from wind and cold snaps. A little later, it is cut off and used as mulch.

What are siderates effective against?

Greenery acts as an active and quick treatment.

For example, you can plant next to potatoes, which can ward off the attacks of Colorado. You can also plant calendula between the rows, which will scare away the pest.

After the potatoes, rye can be planted on the ridges, which will stop the appearance of the nematode. The plant will also inhibit the growth of weeds.

If you plant radish and mustard, then they will neutralize the soil from unfavorable microorganisms. Weed grass will not grow.

To defeat rot, oats or phacelia can be planted next to the plants. Also, the latter culture is suitable for combating late blight.

If you plant dill or marigolds next to strawberries, then the aroma of these plants will scare away parasitic insects. Marigolds act as a deterrent to nematodes. Their aroma also scares off Colorado, flea beetles, bedbugs, aphids and a bear.

If you plant lupine, it will protect the plant from root rot, potato scab, and nematodes.

For example, a plant such as sweet clover will protect crops from nematodes, wireworms, root rot. Mowing green plants will improve the quality of the soil. Melilot also attracts pollinating insects.

Alfalfa will delight worms and various microorganisms that are in the soil with its antiseptic substances, and for weeds and nematodes, they will be like poison. The plant feeds its neighbors with useful elements, stops the growth of weeds. 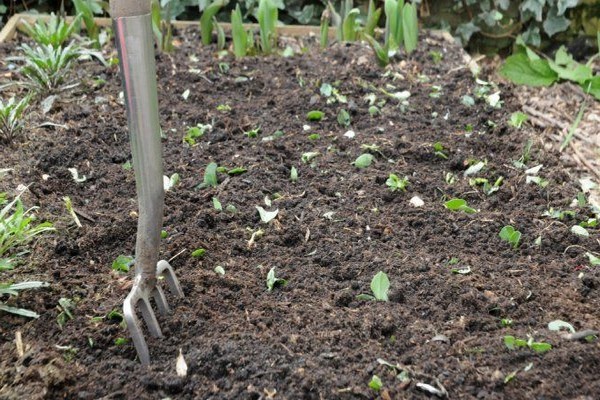 Siderat is usually planted year-round, they have short growing periods, so during the year you can have about 4 harvests of greens.

How to choose a landing site

The seat is selected depending on the needs.

Combination of siderates with different cultures 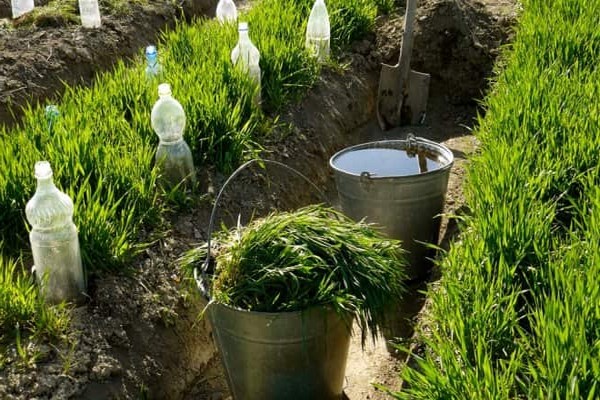 These plants improve the soil, loosening it, enriching it with nitrogen and minerals, and reducing the growth of weeds. Most often, phacelia is planted with tomatoes, as it will help prevent the growth of weeds, the decomposition of foliage and stems occurs at a rapid pace. And the appearance of the plant is very attractive and eye-catching. You can also plant any beans, grains (oats, rye, wheat) and cruciferous plants.

The roots of the main plant do not sink to a depth; it is difficult for cucumbers to extract useful elements in deeper layers of soil. The main role of green manure is the delivery and distribution of micronutrients and macronutrients to the plant. Most suitable plants: legumes - vetch, peas, chickpeas, alfalfa, clover. Cereals – wheat, barley and oats. Cruciferous crops - mustard, rape, rapeseed. These plants are planted between rows of cucumbers to get the best results.

This vegetable loves soil that is saturated with nitrogen compounds. It is best to plant lupines, peas, clover, sweet clover and alfalfa nearby, which will enrich the neighboring plant. If you combine a phacelia with lupine and clover next to it, then wireworms, nematodes and other pests will stop attacking. If you plant oats and sweet clover between the rows, the plants will not be disturbed by pathogenic microorganisms.

The most important thing is that the vegetable crop is not attacked by harmful insects and various diseases. Potatoes get along best with flax - linen. Borage plants - phacelia. Legumes - lupines, beans, beans and clover. Cruciferous - rapeseed, mustard and radish.

Several green manure plants are most often planted with potatoes. It is best to plant barley or oats with peas. When planting mustard and phacelia, you can get rid of the wireworm. But when planting cereals, there will be the opposite effect - the number of wireworms will increase. As a fertilizer, you can plant vetch, honey clover and alfalfa.

Siderata and main plants should be from different families, since if they are similar, they will transmit different diseases to each other. 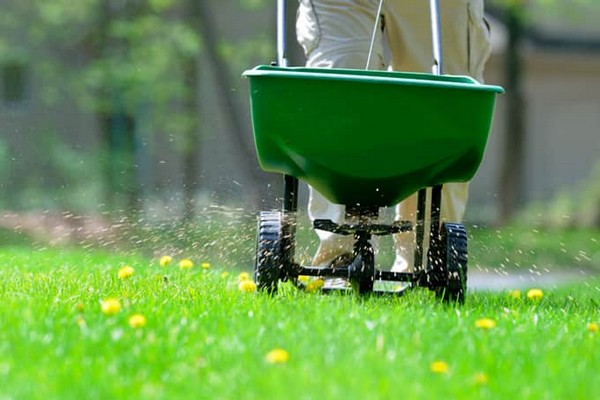 Greens can be pruned before flowering begins. Phacelia, clover and lupine can be left on the ridges for longer as they attract pollinating insects. The grains must be removed after they are fully grown. The stems of the plant are used as mulch, the seed material can be used in the future. The beans are cut after harvest.

If green manure plants grow between rows, then you need to remove them in time, until they have grown higher than the main plants, otherwise the crops will grow slowly.

It is necessary to plow the tops of plants into the ground a couple of weeks before planting the seedlings. They are deepened into light soil by 13 cm. In dense soil by 7 cm.

Plowing is also carried out before the beginning of the winter period. It is necessary to cut off the green manure leaves and stems and dig up the top layer of the soil. The green mass will rot and become humus. For rapid ripening, plant residues are irrigated with medicinal solutions.

The plan for sowing green manure plants is considered in advance at the beginning of autumn. You need to carefully examine the planting site and choose the plants for planting.

Tomato Wonder of the Earth: reviews, TOP secrets of growing with photos