8 years old blooming before the snow
163

8 years old blooming before the snow

With the arrival of autumn, balcony boxes and pots are empty, in which, until recently, annual flowers flaunted. The autumn season in temperate latitudes does not differ in warm and sunny weather, and you really do not want to part with flowering plants, which are an indispensable "attribute" of summer. Let's deceive the autumn and extend the summer by planting frost-resistant annuals outside our window, which, by the way, are not so few. 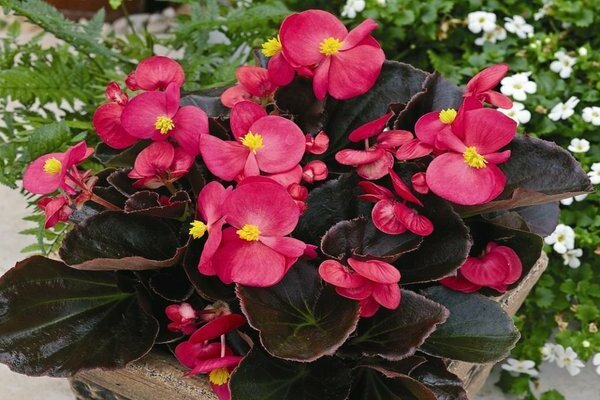 The name of the plant fully characterizes it. Begonia, both in flower beds and on balconies, shows continuous flowering, without requiring special attention.

In addition, the rich palette of colors makes begonia appropriate in any balcony compositions. It should be noted not only the decorativeness of the flowers themselves, but also the attractiveness of the glossy foliage, the chocolate color of which contrasts perfectly with the bright colors.

Despite the fact that begonia is home to the hottest continent, it may well survive a drop in temperature to zero degrees, while maintaining its decorative effect.

It should be noted that the growing season in begonia is quite long. So that by the time of planting the plant has formed normally developed bushes, the seeds are sown in winter, in January, February.

Today, the number of begonias varieties is huge and most of them are compact, low-growing bushes, which makes this plant versatile, suitable for planting and in balcony boxes, pots, as well as flower beds and flower beds. 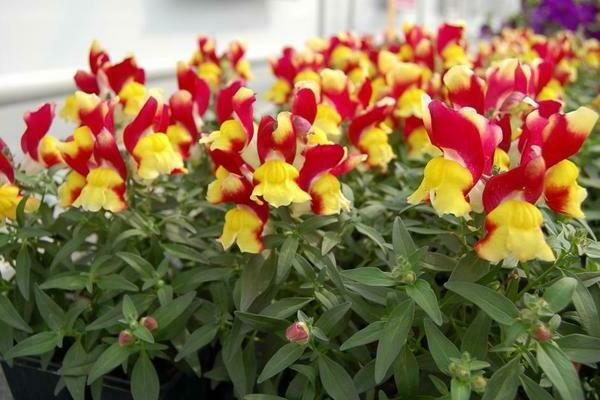 The number of varieties of antirrinum is the second name of the plant, it allows only one to make whole mono-compositions from it. In addition to the small bushes familiar to many, the snapdragon has both tall and ampelous varieties.

This plant can be grown by sowing seeds directly into the soil. But to get flowering plants in June, it is better to sow seeds for seedlings in March.

And having begun flowering in early summer, snapdragons will delight you with bright "dogs" until late autumn. This sturdy summer can withstand not only zero temperature, but also a small minus (-3 -4).

Among the most luxuriantly flowering varieties, including in the autumn period, is the "Twinny" series.

The hybrid varieties of this series are distinguished by an interesting flower shape with double petals similar to azaleas. As well as low growth and numerous branches, making the plant suitable both for planting in flower beds and for growing on balconies and terraces.

Long-term flowering will be facilitated by the timely removal of wilted flowers. 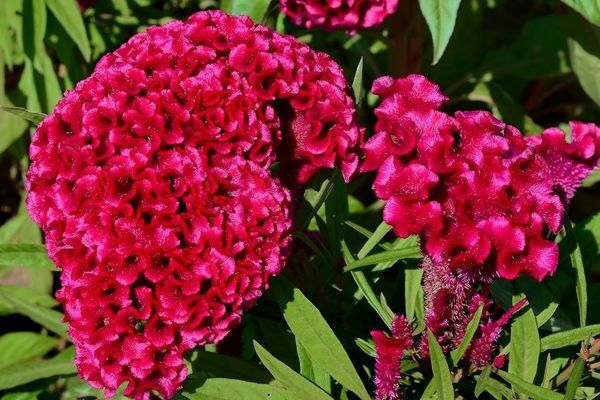 This plant is also called "cock's combs" and, it should be noted that it is not often found in flower beds or balcony boxes. Meanwhile, she deserves more attention to herself.

Celosia belongs to dried flowers, and the inflorescences of some of its species are more like an exotic cereal, which has a rather bright and noticeable color, which does not change even in a faded plant.

Crested cellosia, has inflorescences resembling a cock's comb, for which the plant, in fact, received its second name.

In addition to inflorescences, dark leaves of plants with bright veins are also quite colorful.

Among the many varieties, you can find both tall plants, reaching 1 meter, and miniature bushes, not exceeding 20 cm, which fit perfectly into balcony compositions.Among the latter, it is especially worth noting the dwarf spikelet celosia of the "Cosmo" variety.

Celosia belongs to heat-loving plants and even small negative temperatures are destructive for it. However, despite the death of the plant itself, the dried flowers retain their decorative effect for a long time, without losing their shape and noticeable color. 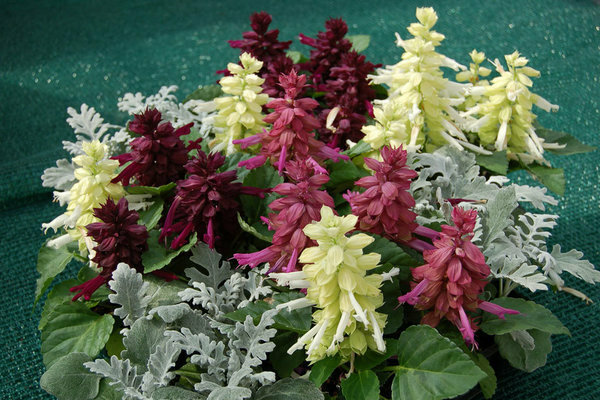 This annual is quite common and familiar to many. Bright candles of spike-shaped inflorescences decorate flower beds, balconies and city flower beds.

For a long time, the decorativeness of an already faded plant can be maintained, the peculiarity of the structure of its inflorescences allows. Leaves damaged by frost are removed, and the inflorescences continue to show off in flower beds, balcony boxes and tubs.

For balcony compositions, low-growing hybrid varieties are chosen that do not exceed 20 cm.As a rule, classic plants are planted in flower beds and flower beds, the height of which reaches 40-70 cm.

Mealy salvia is distinguished by abundant flowering. This species does not form bracts that allow it to be decorative for a long time. However, it is more resistant to low temperatures, which to a lesser extent affect the duration and splendor of its flowering.

In order for the salvia to start blooming as early as possible, seeds for seedlings are sown no later than mid-February.

The most attractive varieties of powdery salvia are Victoria Blu, Evolytion and Rio. 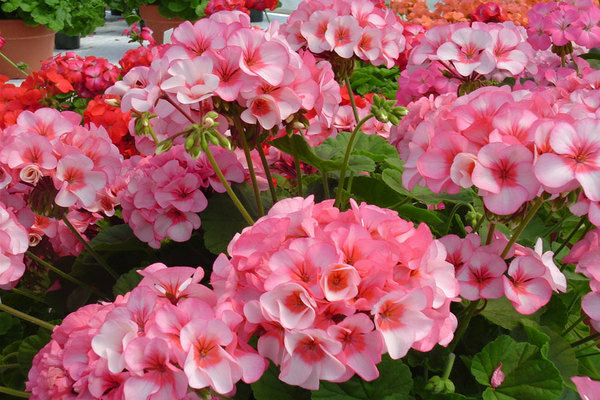 To a greater extent, as long as this plant remains indoor. However, recently, breeders have bred varieties that allow pelargonium to be grown as an ordinary annual plant.

The resulting hybrids are distinguished by a compact shape and lush, long flowering. The most famous hybrid varieties today are Bulls Eye Scarlet, Black Velvet Scarlet.

Such plants are not afraid of cold snaps, up to small freezing temperatures.

If you want to prolong the flowering of balcony pelargoniums, containers with plants can be brought indoors at night, and again displayed on the balcony during the day.

In order for the plants to bloom by the beginning of summer, seeds for seedlings are usually sown in February, March.

In addition, pelargonium reproduces well by cuttings. Cuttings cut in the fall and rooted during the winter are planted in boxes in the last decade of May. Such plants, of course, will bloom much earlier than those that were grown in seedlings. 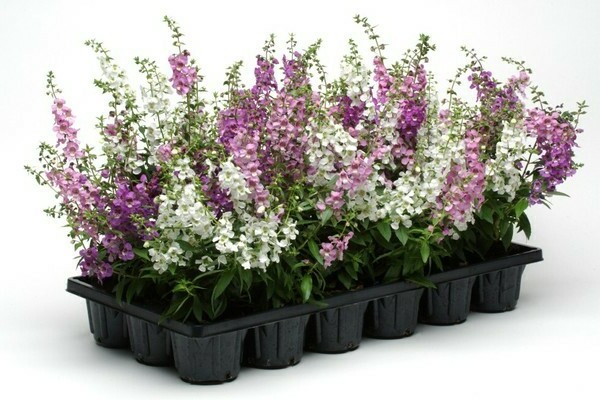 This plant is very popular in the United States, while angelonia is not so well known in our country, and its seeds, more often, can be purchased in online stores. The range of varieties offered for sale is not so wide and is presented so far by two hybrid series Serena and Serenita.

Angelonia flowers resemble pretty faces, for which the plant got its name.

In nature, it is a perennial that develops in the form of a semi-shrub, which explains its long flowering, which continues in the autumn season.

Angelonia hybrid varieties reach 20-30 cm in height. Despite the many branches, the bushes do not need support.

The growing season for angelonia is quite long, so the seeds are sown in January - February. Plants grown from such seeds will bloom in May, and will form buds until the very frost.

By the way, the plant winters well in the house, this makes it possible to propagate angelonia by cuttings in the spring.

And yet, a pleasant feature of the plant is the "apple" aroma exuded by the leaves. 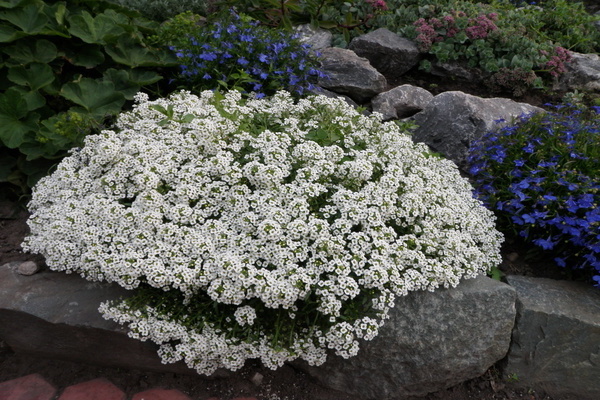 It is an annual that develops in the form of a spreading bush, up to 10-20 cm high. The bush has many racemose inflorescences with a huge number of small flowers of white, lilac, lilac colors.

Alyssium is often planted in flower gardens as a ground cover plant. In balcony compositions, it is used rather as an ampelous plant, since the huge caps of inflorescences simply do not fit in the boxes, hanging in a cascade.

Faded brushes are removed, thereby stimulating the formation of a new wave of flowering.

And this flowering can last for a very long time, since the alyssium can withstand not just frost, but real cold up to -10 degrees.

The plant is usually grown in seedlings, sowing seeds in March-April.

It should be noted that during flowering, Alyssium exudes a rather strong honey aroma. For people with intolerance to flower aromas, a special variety of alissium, odorless, called Wonderland deep purple, has been developed. 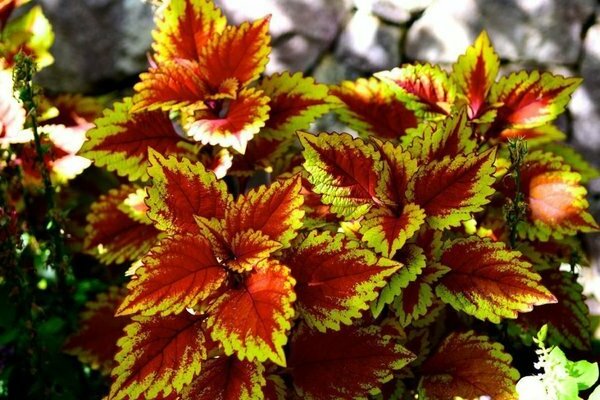 In this case, the foliage of the plant, which has many colors and shades in their completely unimaginable combination, is distinguished by decorativeness. At the same time, changes in weather conditions, including low temperatures, do not harm their appearance in the least.

In addition, among the variety of varieties there are plants with both small leaves and rather large leaf plates, the size of a palm. That allows you to use Coleus in the design of both flower beds and balconies.

The plant is very easy to propagate from seeds sown in March. Some people practice growing by cuttings.

To do this, in the fall, cuttings are cut from the plant and planted in rooting containers. Thus, in the spring you will receive ready-made planting material, which after planting will be much more active in increasing the green mass. And for more bushiness, do not forget to trim young plants.

Bertolonia: description of a houseplant, planting and care, photo