Zygopetalum is a beautiful orchid
1 328

Zygopetalum is a beautiful orchid

Zygopelatum: a description of the orchid 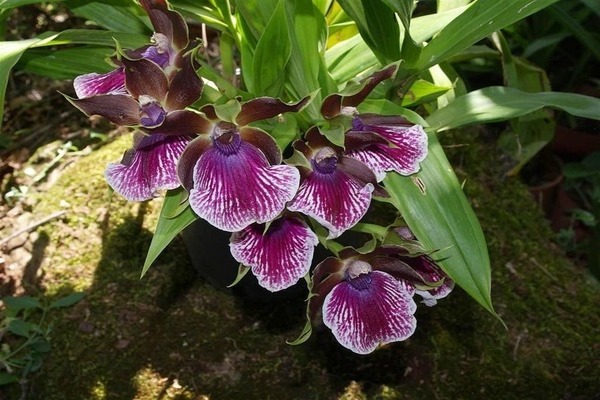 Zygopetalum is an epiphytic plant of the Orchid family. Zygopetalum is more common in Brazil, but can also be seen in the humid tropics in South America. At the moment, about fifteen species are known.

Zygopetalum is characterized by sympodial growth, that is, lateral growth with different points of growth, for example, like in grapes. The thickened stems, which are interconnected by the rhizome, gradually rise above the soil and each new one grows slightly higher than the previous one. Otherwise, such stems are called psebdobulbs.

Orchid pseudobulbs are green, flat and oval in shape with a shiny smooth surface, about seven centimeters long. Each stem has two or three leaves. The leaves are lanceolate with longitudinal veins.

Flowers in Zygopetalum are often brownish with various patterns. Their diameter is six to eight centimeters. 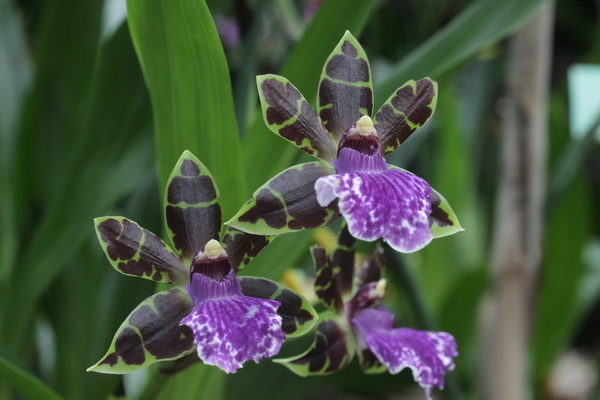 Orchid Zygopetalum: video about growing and care at home

As a rule, Zygopetalum blooms in winter, however, with optimal conditions and good care, the orchid can bloom twice a year.

When young shoots appear, the development of the peduncle begins. In other words, the stem of the Zygopetalum at the top passes into the stalk, on which an umbrella with flowers is located. The length of this stem is sixty to sixty-five centimeters. One inflorescence contains up to twelve flowers. Due to the complex structure of the fused petals and sepals, Zygopetalum is called “petal with petal”.

Three sepals in the orchid are obovate, two of them are located slightly lower, and the third is higher. Part of the perianth, lip, horseshoe-shaped with a round baggy base. She immediately draws attention to herself due to the unusual contrast. The lip is burgundy, pale pink, brown, greenish and even fuchsia. In addition, it is decorated with various stripes and spots, which are usually white. Petals are found both in plain colors and with decorations in the form of stripes and ornaments.

Reproduction of the Zigopetalum orchid in indoor conditions

Zygopetalum easily reproduces vegetatively, namely by dividing the bush. The bush is taken out of the pot and divided into several parts so that each part contains at least three pseudobulbs. The incision site is treated with antibacterial chemicals or activated carbon. After they are transplanted into another pot and covered with foil.

The optimal combination of lighting and temperature is the first guarantee of intensive growth of a luxurious orchid.

Good growth is observed at low temperatures. During the day from seventeen to twenty-five degrees, coolness is desirable at night - about fourteen degrees. It is also recommended to ventilate the room - the plant loves it.

In general, Zigopetalum is an unpretentious plant, its reaction rate limits are from three to forty-two degrees. But you should not indulge in this, since the plant tolerates extreme limits for a short time, and then it may simply die.

In summer, it is recommended to take Zigopetalum outside, where there is a slight breeze and fresh air. But it is important not to leave the flower outside at night, because too strong wind or frost will extremely harm it.So don't forget your orchid!

Different types of Zigopetalum orchids require different illumination. Basically, the flower loves good lighting, but does not tolerate direct sunlight on the leaves. Also does not withstand dark conditions. Direct sunlight can cause burns, resulting in brown, unattractive stains on the sheets. But the lack of light will make the leaves pale and inconspicuous, or the Zygopetalum will not bloom at all, the formed buds will simply die, and the existing peduncles will stop developing. Therefore, it is recommended to place the pots with the plant on the western and eastern windows.

If the light is too intense, then at first the orchid will just grow quickly. However, after the development of young pseudobulbs will slow down. As a result, they will form immature shoots that will not bloom the next year.

The Zygopetalum orchid loves medium humidity. In summer, as a rule, additional procedures are not required. However, in winter, when the batteries are running, the air becomes dry and hot, it is recommended to create an "artificial fog" by spraying water just above room temperature from a spray bottle. It is important to know that the water must be softened. You can take rainwater, or you can carry out various actions on the flowing one: filter; freeze and remove the top film when thawing; let the water settle for several days. Do not overdo it with moisture, because the leaves can rot from excess water.

A special mixture of orchid substrate is advised to buy in the store. Its composition is as follows: charcoal, pine bark and peat moss. It is not necessary to plant Zigopetalum deep into the soil, otherwise its underground organs will rot.

Strong overdrying of the soil has a detrimental effect on this orchid. She, unlike other members of the family, does not have a velamen layer that absorbs and retains moisture. Let me explain a little. Velamen is a layer of cork tissue made up of dead cells. And since cells die off faster in the air, Zygopetalum "by nature" was without it. Stagnation of moisture at the roots is also unacceptable, the plant may die from a lack of oxygen, because the air permeability of the substrate will decrease.

Over the years, the Zygopetalum orchid adapts to the conditions that humans have provided to it. Therefore, if you rarely watered the plant, then a sharp increase in water will have a detrimental effect, and, conversely, with intensive watering, a sharp decrease in the amount of water will not lead to good.

Try to keep the soil slightly moist. In appearance, this is defined as follows: moisture should not rise, and the soil should not stick together.

How to properly water Zygopetalum

In warm weather, a period of intense growth begins at Zygopetalum, it should be watered abundantly and systematically. When the substrate dries up after one watering, but, mind you, does not dry out, watering is repeated.

In winter, it is customary to reduce watering, as the temperature drops. It is important to keep track of the amount of water. The earth should dry out by three centimeters, only then can it be re-moistened. Excess water can cause underground organs to freeze. So in the "non-summer" terms, watering is reduced, but does not stop altogether.

It is important to fertilize Zygopetalum skillfully. Be careful, the orchid does not tolerate excess feeding.

Fertilizer should be purchased in the store, it is easy to choose it - it says "for orchids". Please note that you should not add the dosage recommended on the package, it is better to take a third or a fourth of it. Fertilize once every two weeks when the plant is growing intensively. This is done simply: either add liquid fertilizing along with water for irrigation, or simply spray the plant.

It is best to grow the Zygopetalum flower in a plastic pot with a suitable substrate. The land for planting Zygopetalum must be water- and breathable.They buy it in a store, but it is possible to do it yourself. The composition usually includes the following components: sphagnum moss, pine bark, charcoal, sand and peat. An abundant drainage layer is a prerequisite for transplanting and the subsequent comfortable moisture of the substrate.

Zygopetalum is transplanted only if necessary, when the roots of the orchid become cramped in the old pot. It is transplanted like this: the plant is removed from the substrate, the old dry parts are cut off, including completely dried stems, the cuts are treated with activated carbon or a fungicide is used. But shriveled pseudobulbs do not need to be removed, they contain a supply of nutrients necessary for the development of the plant. After completing these steps, it is important to know that pseudobulbs cannot be buried, otherwise they will rot.

The Zygopetalum orchid is very vulnerable in this regard. It can be exposed to bacterial and fungal infections that cause it to rot. At this moment, the beloved plant needs abundant care. The rotten part should be trimmed off before the beginning of the healthy tissue. Next, they are treated with an antimicrobial drug, for example, activated carbon, which removes toxins that have entered the body. And the most difficult is the final stage of recovery. Zygopetalum should be planted with sphagnum moss, which is known for its antibacterial action. And only when the first roots begin to appear, they are carefully planted and covered with earth.

Spider mite is the most common pest, it occurs with increased dryness. To get rid of it, you need to rinse the plant under warm water, pay special attention to the leaves. Next, treat with an insecticide.

Treating a plant is difficult, so it's best to provide it with proper care right away.

Why the leaves of Zygopetalum turn yellow

There are several reasons for yellow leaves in Zygopetalum.

Why the orchid doesn't bloom

The plant does not bloom due to lighting. As a rule, it is too excessive for him, he has to adjust.

Also, the reason for the lack of flowering is not the right temperature.

Fifteen species are known in the genus Zygopetalum. Some of them are grown at home. Hybrids obtained by breeders are very popular.

The flower-bearing stem is forty centimeters long. Inflorescence of Zygopetalum waste from eight to twelve flowers, which are no more than five centimeters in diameter. The sepals and petals are obovate, broadened from above. Their color is green with burgundy blurry stripes. The lip is white, with bright purple patterns.

Zygopetalum pedisellatum is very similar to the previous species, but differs in the lip. It has a large snow-white surface.

Peduncles of Zygopetalum maxillar grow up to thirty-six centimeters. The inflorescence of the brush contains six to eight pieces of corolla, the diameter of which is six centimeters. The lower sepals are colored burgundy; a greenish tone is barely noticeable on them. Another sepal is mostly brown, but towards the end turns into olive with dark red spots. The lip also has a transitional color: the base is purple, then it becomes lighter, at the end it is snow-white.

Zygopetalum three hundred has a peduncle of twenty-five centimeters, a corolla with a diameter of about six centimeters, uniformly colored narrow sepals and burgundy petals with green spots at the base. The lip is white with purple streaks.

Zygopetalum pabsti is the largest representative.Its peduncle reaches as much as nine hundred centimeters, the diameter of the corolla is about ten centimeters. The colors are different, but still this: burgundy dots on a green background, a snow-white lip with purple stripes.

But Zygopetalum microphytum is very miniature, the stem length is from fifteen to twenty-five centimeters. Standard colors.

Zygopetalum Luisendorf is known for its wonderful delicate aroma, which it delights with during flowering, for two months. The flowers are bright burgundy with barely noticeable green spots.

The blue angel also has an amazing aroma that has been compared to spicy ginger or pepper. Its petals are a light heavenly hue, and its lip is the color of the blue of the sea.

In this variety, the attention is drawn to the chocolate color of the petals with a bright lime edging, the white lip with catchy purple stripes.

The lip of this orchid is burgundy, and the petals are brown. 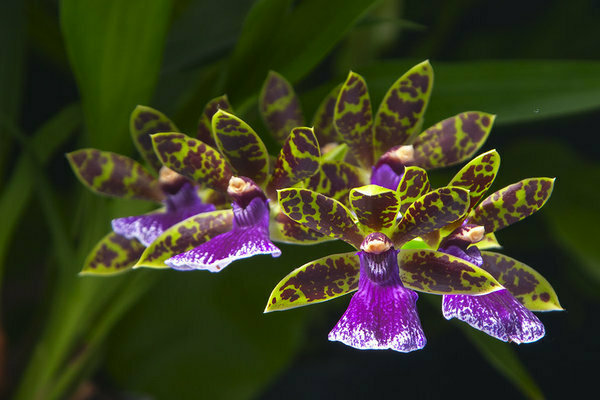 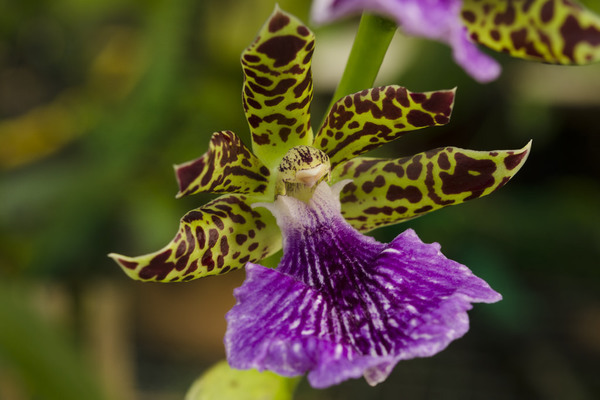 Swiss Style Landscaping: How To

Currant Pilot Alexander Mamkin: ALL the secrets of the variety with a photo 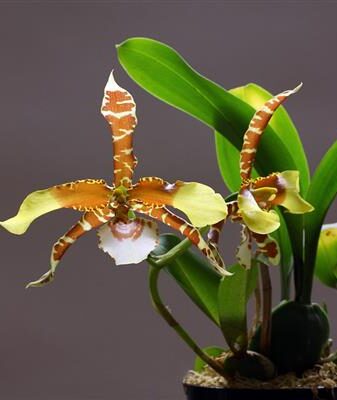 Rossioglossum
Rossioglossum is another Orchid species. For the first time, plants of this genus have been described yet ... 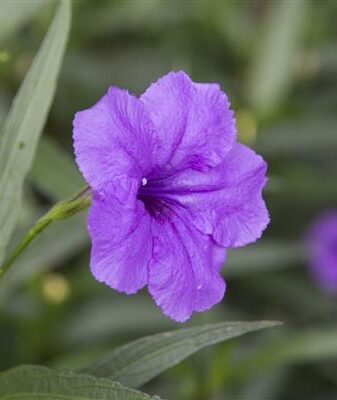 Ruellia
Ruellia, like most houseplants, is a native of southern countries. She is the representative ... 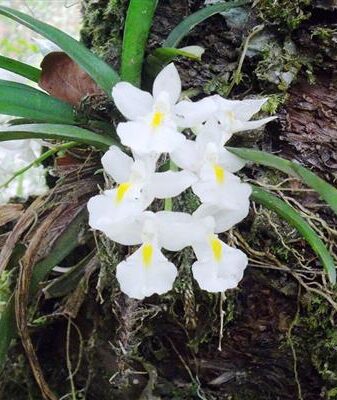 Rodriguezia
Rodriguezia is a representative of the genus of the same name, which, in turn, is part of the family ...
×