Why do eggplant leaves turn yellow
272

Why do eggplant leaves turn yellow

If you notice that the leaves of eggplant turn yellow, then before you start helping the culture, you need to find out the reason for this phenomenon. And the reasons may be different: a deficiency of various elements, the presence of a disease, an attack of pests, insufficient watering. For each specific case, there is a way to solve it.

Why do eggplant leaves turn yellow - possible reasons for this phenomenon 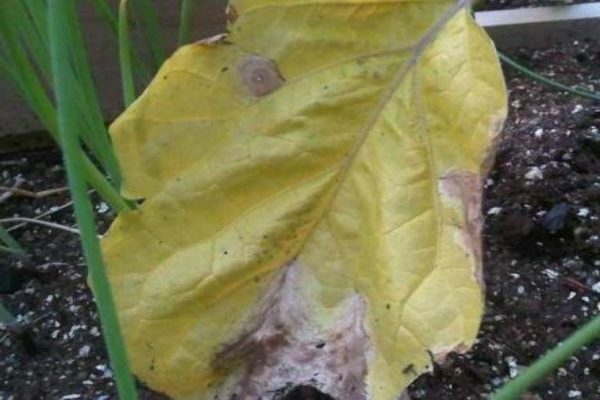 There are two main factors for the appearance of yellowness on the leaves. Let's dwell on them in more detail.

If apart from this phenomenon there is nothing else, then this may be in the order of the norm. Moreover, when it comes to eggplants, which have recently been transplanted to a permanent place.

This may be a normal reaction. Since transplanting a culture to a permanent place, it has stress. And she needs time to fully adapt to the new conditions. The fact is that eggplant concentrates more on the development of the top than on the lower leaves.

Also, another reason that the leaves of eggplant turn yellow may be the age of the culture. Photosynthesis may be impaired in adult crops. Such leaves are easy enough to cut. Another reason may be a lack of light due to strong thickening.

Eggplant simply has no choice but to get rid of the lower foliage. A more serious cause of yellowed low leaves may lie in the root system, which has been attacked by pests, or there was stagnation of moisture and rotting began.

The cause of yellowness is disease

Eggplant leaves also turn yellow due to illness. If the eggplant has undergone a fungal disease, then it often looks like spots on the leaves. And we are talking about completely yellow leaves. If we are talking about diseases, then they can manifest themselves in the following:

Cercosporosis - chlorotic spots, which are small and round in shape, which later begin to take on a brown color.

Anthracnose - the spots are brown, oval in shape.

Bacterial spot - spots of black color, small in size, with a yellow border. 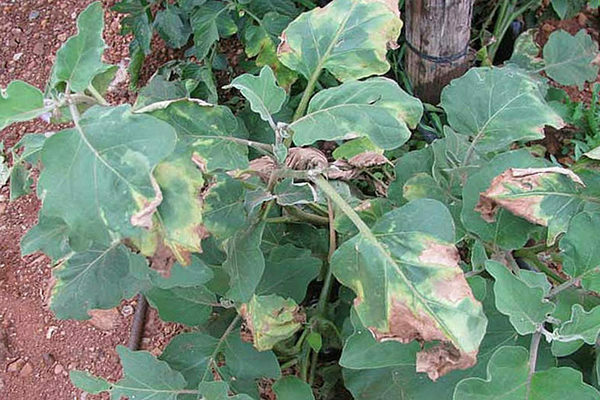 Eggplants grown in greenhouses are most often exposed to fusarium. Leaves begin to turn yellow, starting from the edges of the leaves, then begin to curl and dry out.

As for pathogenic fungi, they begin to secrete toxins, blockage of blood vessels occurs, the plant begins to suffer from toxicosis. These diseases can become chronic and thus the eggplant is completely depleted.

To avoid contracting this disease, it is necessary to apply potash fertilizers. If this did not help save the situation, then it is better to remove the infected plants in order to save the still healthy ones.

You can also meet with such a disease as mosaic (sometimes confused with magnesium deficiency). The main signs of infection with this disease are yellow spots that have an irregular, acute-angled shape.

At first, the spots have a light, yellow-light green color, begin to appear along the leaves. Then they cover the entire leaf, spreading over the entire surface and finally necrotic. The fruits begin to have an ugly, irregular shape.

Unfortunately, there is no cure for such a disease, the plant must be cut off and must be burned, preventing infection of other, healthy plants. You may ask how to determine exactly: an eggplant has a magnesium deficiency or a mosaic disease.

To do this, you need to treat the leaves with a solution of magnesium nitrate and observe for a week. If during this time you did not notice an improvement, then this means that the plant was infected with a virus.

How to save eggplant: leaves turn yellow due to lack of nutrients. What to do 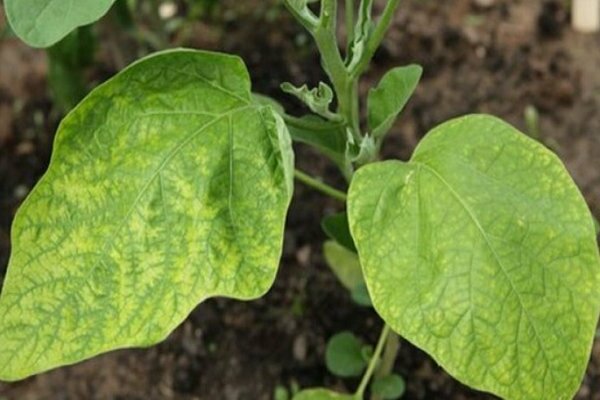 At its core, eggplant is a difficult crop to fertilize. He just needs nitrogen, he is demanding of potassium, it would be nice to add phosphorus.

Before you begin to deal with the deficiencies of various elements, you need to once again touch on the topic of fertilization.

After you transplant eggplant seedlings to a permanent place, after about 15-20 days, you need to apply complex fertilizer for the first time (take at the rate of 2-3 tablespoons per 1 bucket of water, and add about 0 , 5 l).

If the eggplant lacks macronutrients, then you will notice yellowing of the lower leaves, and the upper ones will change their shape and curl. As for trace elements, their deficiency looks like yellow upper leaves.

Most often, summer residents begin to use local preparations, humus or compost, assuming that they are rich in these microelements. But actually it is not. Therefore, it is better to use special foliar dressings. 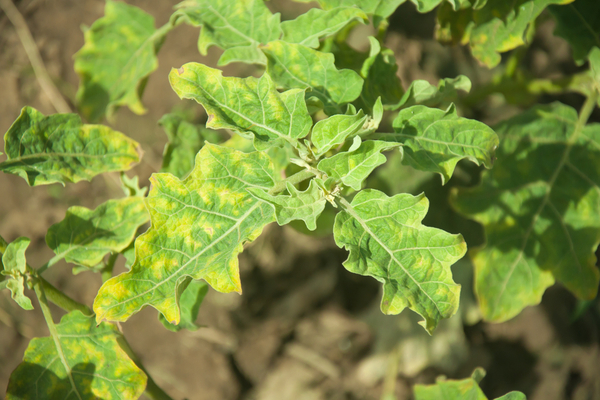 The above substances must be applied under each eggplant bush, 0.5 liters. If you want to speed up and improve the process, then you can carry out foliar feeding with the above substances. But use double concentration.

If you have not noticed a special effect, then you can repeat a similar feeding after about 15-15 days after the first. But don't be overused. Excess nitrogen can also adversely affect eggplants. The quality of the leaves and their density improve, but the development of ovaries and fruits will be delayed.

2) Potassium deficiency. With such a deficiency, the edges of the leaves begin to turn yellow, forming a small border, which after a while begins to dry out. Leaves may have the shape of a boat bent upwards. New leaves are small, shriveled.

If the eggplant is deficient in potassium, then problems with the ovaries and fruits may occur. It is fashionable to save the situation by applying fertilizers containing potassium. Ash also performed well. But it is the herbal one that is needed, since the potassium content in it is even higher than in the wood one, it contains more calcium.

Sometimes a problem can arise due to the fact that there was an incorrect or incomplete absorption of potassium. For example, if the air temperature was above +35 degrees. This situation is especially true for those eggplants that are grown in a greenhouse.

Therefore, it is best to ventilate the greenhouses by opening the upper windows, mulch the soil, and also do not need to apply nitrogen fertilizers.

3) Lack of phosphorus... In the event that the eggplant foliage looks high up, at an acute angle in relation to the stems, then we can talk about a lack of phosphorus. The introduction of phosphorus fertilizers will help to correct the situation. They are applied both under the root and by spraying the foliage.

4) Lack of zinc... It can be expressed in the fact that spots of a brown, grayish hue begin to appear on the leaves of the eggplant, which are then necrotic. At first, these signs can be seen on the lower leaves.

Then they can already be seen at the top of the plant. In order to remedy the situation, you need to add zinc sulfate with fertilizers that contain phosphorus. Fertilizers are applied on top of the leaves.

5) Micronutrient deficiency. As we said earlier, the lack of micronutrients is reflected in the upper leaves, macronutrients - in the lower ones.

6) Lack of calcium - the tips of young leaves become as if burnt, while the old ones begin to acquire a dark color.

7) Not enough boron - the upper leaves acquire a twisted shape and a light color.

8) Lack of sulfur - in terms of signs it is similar to the signs of a lack of nitrogen, but this is manifested only at the top.

9) Deficiency of manganese, chlorine and iron can also cause yellowing of leaves. To correct the current situation, it is necessary to apply complex fertilizers. 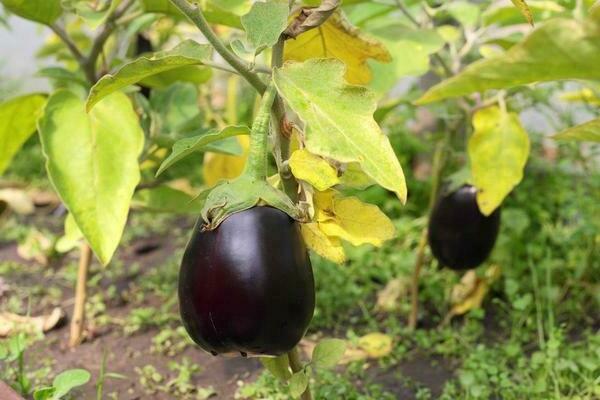 Most often, it also happens that the eggplant leaves not only turn yellow, but also begin to curl, there may be several reasons for this:

We should summarize what we were able to learn:

1. The leaves turn yellow with a lack of macronutrients, the upper ones - microelements.

2. Spots of various shapes appeared on the leaves - the presence of a certain disease.

3. Leaves began to wither - problems in the root system.

Apple tree bark is cracked - what to do? Causes of the disease