Chickweed (Cerastium) is a herbaceous annual or perennial belonging to the clove family. In its natural habitat, it is found on the Australian continent, in the North and South of the American continent, in the North of the African continent and in Eurasia. To date, 200 species are known. Yaskolka translated from Greek means "horned", and it is given because of the shape of the fruit that some species of this plant possess. Some species of this genus are especially popular with most gardeners.

Grass Yaskolka: description of the plant 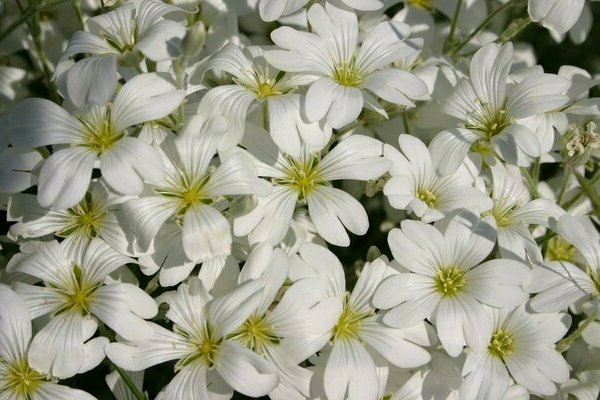 The Yaskolka plant is a herbaceous plant consisting of erect or ascending shoots not exceeding 30 centimeters in height, sometimes with pubescence or completely bare. The root system is strong and close to the surface of the soil, has the ability to easily take up areas even on stony ground. In creeping stems, the rooting process is quick and easy. Plants are covered with whole, small leaves, often with dense pubescence. They have the opposite location on the branches. Chrysalis blooms white flowers 2 cm in diameter with petals with a double incision. The fruit is in the form of an oblong cylindrical box, contains brown yaskolka seeds. 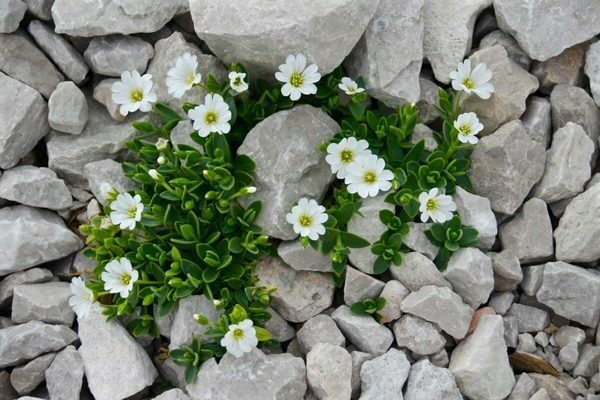 Perennial chickens are grown by seeds, seedlings, or a seedling method is used. Chickweed seeds can be sown directly on a prepared outdoor garden plot, in mid-spring or before winter. As soon as the first sprouts appear, thinning should be done in such a way that a distance of 5 centimeters remains between them.

Yaskolka: how to propagate a plant

Despite the simplicity of this method, gardeners often prefer to propagate chickweed grass using chickweed seedlings. Chickweed seeds for growing seedlings are sown at the end of winter or in the first days of March. Due to its excellent germination, the first sprouts from the seeds will begin to emerge within a week.

It will not be difficult to grow chickweed seedlings, the main thing is to water on time and loosen the top layer of the earth. As soon as a couple of real leaves appear, it is necessary to dive the plants into individual cups. Chick seedlings are planted on the garden plot in the middle of summer.

How to plant a chrysalis flower in the garden

This groundcover is very fond of places with good natural light, for this reason, an area open to sunlight throughout the day is suitable for it. In this case, you should choose a place protected from winds and drafts.

The Yaskolka plant is very aggressive in growth, and within a short amount of time it is able to cover an area with a diameter of up to 80 centimeters. To prevent this from happening, after landing, it is necessary to determine the perimeter and make a restriction on it. As for the composition of the soil, here the plant does not require any special conditions. It will be able to grow even on a rocky area, only there will need to be added peat in a small amount. Despite her unpretentiousness, she still has preferences. Loves perennial yaskolka in the garden, loose, light, well-breathable soils, with a low alkali content and with a lot of sand. Before planting, it is necessary to dig a site 50 centimeters deep in three weeks and at the same time add humus there at the rate of 6 kg. for 1 sq.meter. Sand should be added to loamy or clay soil. Right before planting, it is necessary to loosen the site, as well as harden the seedlings. Planting holes should not go deep, but should be 30 centimeters apart. Having placed the plants there and covered them with earth, it is necessary to carry out abundant watering. Grown from chrysalis seeds, will demonstrate all the beauty of its flowering after a year in the garden 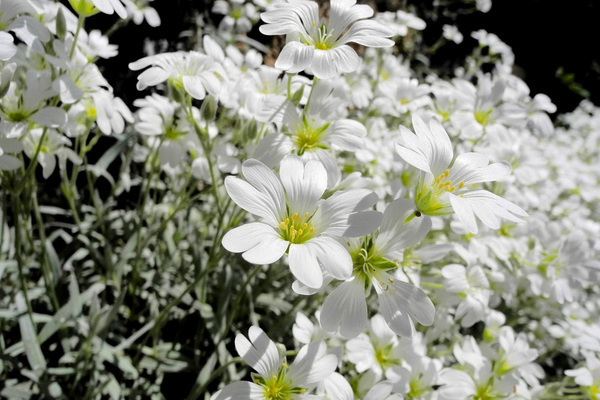 Perennial yaskolka: photo of a flower

An unpretentious perennial chickweed to grow in the garden will not be difficult and will not take much time. The main thing is to choose an area well lit by the sun's rays, and a poor soil will be even better for the plant than one filled with nutrients. With the onset of spring, it is necessary to clean the site, clearing it of debris. You also need to remove all weeds from the site in time, water, cut the plant, remove those flowers that have already wilted and loosen near the bushes, which, however, can be dispensed with.

A beautiful shingle, in addition to all its advantages, also tolerates periods of drought well, however, this does not mean that it does not need to be watered at all. Watering activities should be carried out at intervals of a week, and with regular summer rains, this should not be done at all. If the drought is prolonged, then watering is required.

As for dressing, there is no consensus among experienced gardeners. Some argue that there is no need to apply fertilizers, because perennial chickweed is very good without them. Others believe otherwise and say that when fertilizing during the summer, the chick will feel even better. If the decision is made in favor of fertilizing, then those fertilizers should be applied with which ornamental garden plants should be fed. Both organic matter, in the form of a mullein in liquid form, and a complex of minerals are suitable, so you can alternate them. During active growth and development, fertilizing is worth no more than three times.

Rules for pruning chicks in the garden:

The chrysalis flower grows very quickly and strongly, so you cannot do without pruning. With the arrival of spring, it is necessary to carry out sanitary pruning, during which it is necessary to remove the stems that have any damage, including from diseases and frost, or drying out. In the spring or when the plant begins to bloom, it is necessary to carry out the pruning that forms the bush. At this moment, all thickening unnecessary branches are removed, and others are sent to the direction the gardener needs. After the end of the flowering of the chrysalis, pruning of all flowering shoots should be carried out. If pruning is done according to all the rules, then you can enjoy the re-flowering, which will begin at the end of the summer season. However, you should not expect the same lush flowering of the chickweed as the first time.

Rules for transplanting yaskolki in the fall:

A shingle plant can grow on one site for many years, but at a certain point the growth will become so large that it will need to be transplanted in the fall. At this moment, the shrub can be propagated by dividing the bush into parts. Before digging them out of the ground and separating them, they must first be heavily pruned. Having dug up the plant, it is necessary to examine the root system well and remove all roots that have dried up or have putrefactive formations. Landing is done in the same way as the primary one. Gardeners with extensive experience in growing this species are advised to replant the shingle every 5 years, if there is no need to do it more often.

A perennial chickweed in the garden, grown as a perennial, has a moderate resistance to frost, which allows it to be left uncovered for winter months in areas where winters are warm. In colder regions, cover the plant with spunbond or lutrasil. In this case, the use of spruce branches or fallen leaves is not recommended.

Resistance to diseases and harmful insects:

The chrysalis flower has strong immunity that protects it from many different diseases and pests. If there are problems with diseases and harmful insects, then this is due to improper care or non-compliance with agrotechnical rules.When watering too often and using a lot of water, the roots may begin to rot. In order to avoid trouble, it is enough to carry out the correct watering, conduct regular inspections, cleanse the plant of dry stems and flowers, and clear the ground of weeds.

Among the large number of species grown in garden plots, only a small part of them. But despite this, there are enough of them to choose exactly the one that suits your taste.

Alpine lamb (Cerastium alpinum) - the Carpathians, Altai mountains, Western European and northern parts of the American continent are famous for these plants. Alpine chick grows up to 15 centimeters in height. The creeping shoots of alpine chippers envelop the pubescent ovoid leaves with a green surface covered with silver. Snow-white inflorescences with a diameter of 2 centimeters cover the alpine yaskolka during flowering.

Jaskolka Bieberstein (Cerastium biebersteinii) - this perennial first appeared on the Koymsky Peninsula, it is omitted, which is why it acquired a gray color. Jaskolka Bieberstein has creeping branches covered with non-petiolate linear-oblong or linear leaves, as well as flowering shoots, the length of which reaches 20 centimeters. The formation of inflorescences occurs on the upper parts of the shoots. Their shape resembles an umbrella. They are collected from snow-white flowers with a diameter of one and a half centimeters. Bieberstein's chickweed began to grow since the 20s of the 18th century. Among gardeners, the Snow Carpet variety is especially popular. Yaskolka Snow carpet, the bush of which is assembled from creeping densely pubescent shoots, creates the impression of a dense pillow covered with small petiolate leaves. The flowering shoots, on which the snow-white flowers open, reach 20 centimeters in height.

Jaskolka Biberstein: video about the variety

Felt chickweed (Cerastium tomentosum) - this species first appeared in southern Italy. The pillow that this type of plant forms reaches 30 centimeters in height and 60 centimeters in diameter. The creeping stems of the felt chippers are covered with gray felt pile and small light gray leaves. The diameter of white flowers does not exceed 1 centimeter. Unlike other species, this flower does not have such a strong growth, which is the reason for its active cultivation in rock gardens. Cultivation began in the 20s of the 16th century. Gardeners especially often cultivate varieties such as:

Felt cradle: video about the variety 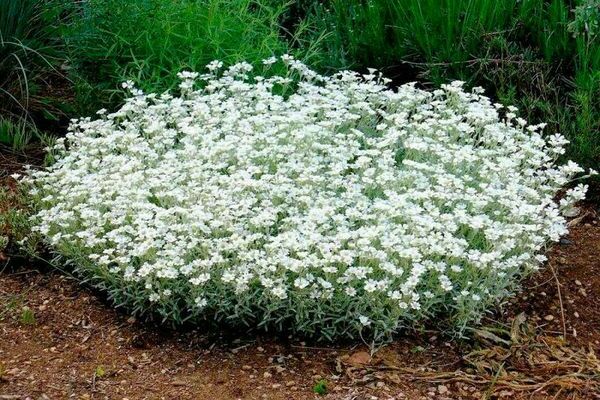 White Yaskolka (Cerastium candidissimum) - Greek endemic with erect shoots covered with pubescence in the form of thick felt, giving the impression of dense pillows. The leaves located in the upper part of the shoots have a lanceolate-linear shape, those that are located at the bottom have a paw-legged oblong shape. The large-sized flowers of white chickweed have a double section.

Yaskolka Uralskaya (Cerastium uralense) - this beauty is in the Red Book, as it gradually disappears. A bush with a loose turf and shoots not exceeding 25 centimeters in height. The shape of the leaves of the Uralskaya lanceolate is lanceolate, 4 centimeters long, and they are twice as wide as long. The snow-white flowers of the Ural yaskolka consist of petals cut into a quarter. 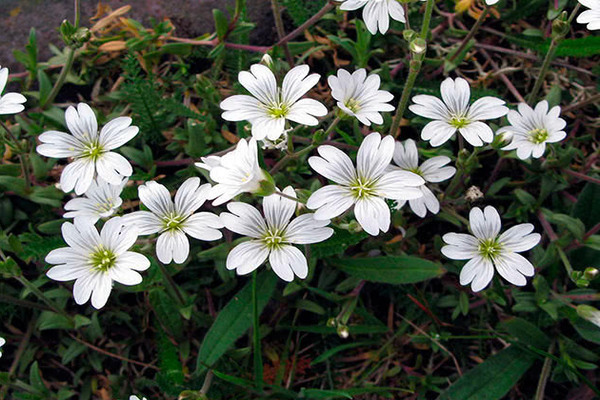 In addition to these varieties, quite often in garden plots, you can meet with field chickweed, large-flowered and purple chickweed.

Wilt in clematis: what to do and how to treat the disease? TOP Tips 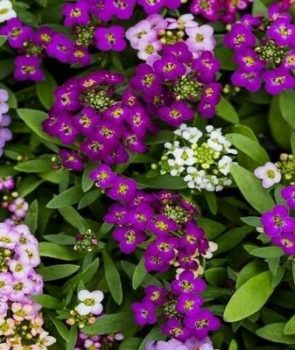 Alissum
Alyssum is a very good soil perennial. The plant itself is very bright and attracts everyone with its ... 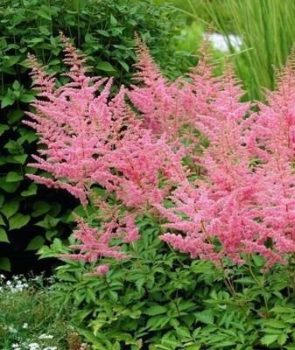 10 most unpretentious perennials
An excellent solution for those who do not have the opportunity to provide constant care for flower beds on ... 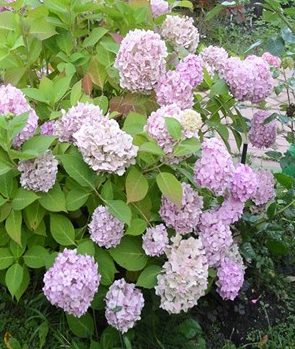 Suitable perennials for planting with hydrangeas
Incredibly beautiful and popular, hydrangeas are not only popular but also irreplaceable shrubs ...
×