The Renet Kubansky apple tree is a late winter one with an intensive type of selection according to the North Caucasian Zonal Research Institute of Horticulture and Viticulture, it was obtained by combining varieties, one of which was "Renet Simirenko" in 1969, thanks to the work of breeding specialist SN Artyukh. In 1972 he passed a state test for various diseases.

In 1998, this variety of apples was entered into the state register of breeding achievements of our country for cultivation in areas of the North Caucasus. Today it is widely used in the south of our country and in Ukraine. 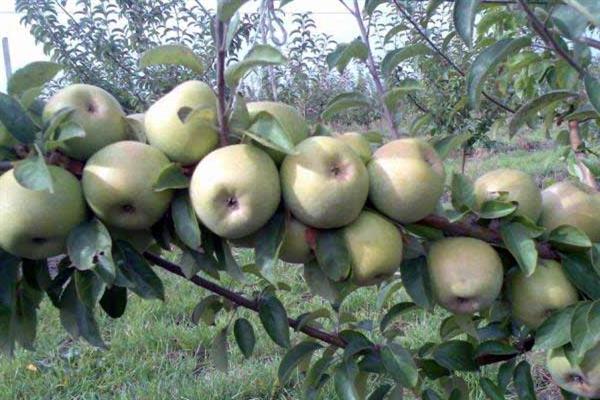 This fruit tree grows small in size, has a flat crown, regular round, thickening is assessed as moderate, branches growing from below have a slope to the soil. Branches from the trunk in the first tier recede at an angle, from about forty to eighty degrees, and over the years the angle approaches ninety degrees. The stem bark and on the branches has a gray color and a brown tint, the sides on which the sun's rays fall are rusty. This apple variety has a mixed harvesting process.

The branches are rather thin, grow straight or slightly crooked, the color is brown, a large number of villi in the upper part, small lentils are located freely in small numbers. The foliage is of ordinary size, oval, elongated, folded in half, resembles a spiral, with small wrinkles, serrate at the edges, sometimes crenate, narrow, oval, the base is not the same size, the tip is pointed. The leaf plate is greenish or light green in color, glossy, and the parent variety is matte, has an angle of ninety degrees with the stem. The petiole is of ordinary size, often with villi and pink color, the central vein is identical in color. Stipules are small, lanceolate.

The flowers are saucer-shaped, snow-white with cream veins at the petals. The pistil column is small, has villi, the stigma is located identically to the anthers. The flowering process is medium late.

Medium to large crop. Most of the crop in the crown has a different shape, the shape is truncated-conical, flattened, elongated. The surface of the apples does not have any irregularities, the ribbing is poorly expressed. The main color of apples is bright green, with large white, round, dense dots located under the skin, in contrast to the parent variety. On the side where the sun's rays fall, by the removal of fruits at the end of the first - beginning of the second autumn month, a dark pinkish color is acquired, in contrast to the parent variety. This is especially true in areas with a tinned row between rows. The skin does not have any irregularities, it is compacted, the wax coating is ordinary, but it increases with time, the funnel is deep and wide, there is rust, it most often comes out of the funnel. The fruit stem is thin, of ordinary size, no sagging, slightly curved. The saucer is wide enough, the depth is average, with five tubercles turning into five rays, a pronounced plateau near the sepals. The cup is fully open or half closed. The tube, located under the calyx, is tapered or tapered. The seed chambers are small, completely closed, the axial cavity is rather narrow. The seeds are small, flat, round, brownish in color.

When removed, the pulp is dense and filled with a large amount of juice, the color is pale green. When ripe, transparent and green at the same time, creamy, amazing taste, sour and sweet at the same time, the aroma is pronounced. In the content, the pulp becomes more tender, the smell becomes richer. The fruits contain:

Until ripeness is removable, the crop is perfectly attached to the fruit tree. In favorable realities, the contents are stored until the beginning of the summer season and more. The ability to transport apples over long distances is good. The consumer qualities of apples are amazing - ninety - ninety two percent. The amazing dessert taste of the crop is not lost in products after thermal work - freshly squeezed juices, marmalade, chips.

This type of apple is half self-fertile. It is recommended to plant nearby varieties that will pollinate your tree:

This variety begins to yield a harvest when it reaches three to four years of age on a low-growing rootstock, on a medium-sized rootstock when it reaches four to five years of age. The harvesting process is regular. A large amount of harvest on high agricultural backgrounds, especially when tinning between rows, ordinary perennial fruits reach from four hundred centners per hectare and more, the habit of the crown of the variety allows you to form a density of apple trees per hectare of one to two thousand on a weakly grown rootstock.

The level of resistance to cold and frost of this variety is high, in the record cold winter season of 1993-94, the apple trees of the parent variety suffered greatly or even died, this apple variety had a degree of damage of one to two points, and the next year brought a normal amount of harvest. This variety of apples is not capricious, with a good level of resistance to various diseases. Only in special years can the plant's immunity decrease.

The advantages of this variety of apples:

Disadvantages of this variety of apples:

Apple variety "Detskoe" - all about the variety

Spinach in the garden: how to grow it right?