Russia is a country with rather harsh climatic conditions in many regions. This indicator greatly complicates the development of viticulture on an industrial scale. However, the Amur breakthrough grapes may surprise you.

The capricious Vitis vinifera and its closest American relatives are not capable of growing in the snowy and cold Russian winter. But despite such a sad situation, Amur grapes grow in the Far East and the Siberian taiga. He is not worried about such trifles as diseases, fungi. As well as severe frosts.

Due to the fact that wild berries are little used for eating uncooked, they will also not work for the manufacture of some culinary masterpieces, Amur Breakthrough grapes were not particularly interesting for gardeners.

The history of the origin of the variety 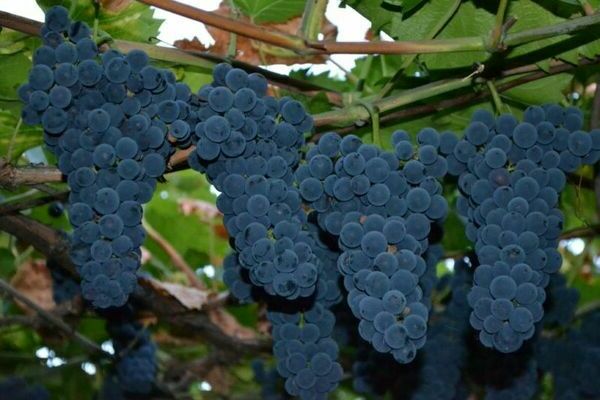 For several years, breeder-biologist Alexander Potapenko was engaged in the creation of a unique variety of non-wild Amur vineyard. Brother Ya. I. Potapenko, after whom the All-Russian Novocherkassk Scientific and Research Institute of Winemaking and Viticulture was named. A. Potapenko managed to implement the very first changes and innovations.

The scientist set himself the following task - to cultivate the wild Amur grape variety. And also to carry out selection between species. This process was carried out by our ancestors 1000 years ago. First, he tried hybridization between Amur grape varieties. But the future offspring did not receive certain genes. Alexander was not satisfied with this result. And he decided to look for new methods of selection. 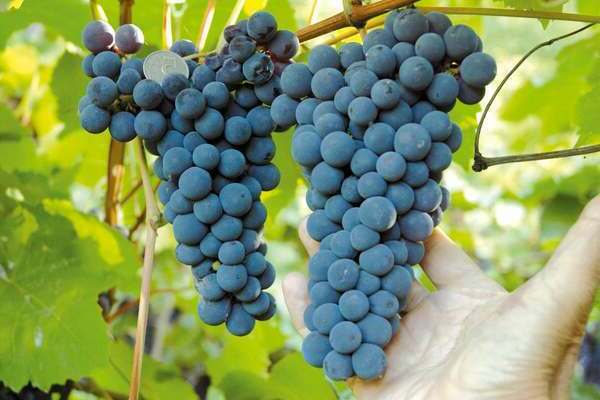 But the breeder biologist fulfilled the main task. He transferred plants from their normal state to a mutational state. It became possible to use hybrids for subsequent breeding. Which contributed to the increase in yield. It also improved taste and characteristic qualities. But at the same time, the view remained unpretentious in care.

In the wild, the berries were usually filled only with seeds. But Alexander Potapenko managed to increase the volume of pulp and juice production. The bunches became wide.

During the breeding, the wild variety Vítis amurensis was used. The scientist managed to breed a large number of hybrids between species and within species. The qualities of the mutated varieties were varied. But there were always two important qualities. Namely: resistance to disease. And also the absence of fear of severe frosts.

Many hybrids, due to the large number of positive qualities, were included in the State Register. They rightfully deserve such a high position. Because the scientist put all his strength and practical ideas into them. 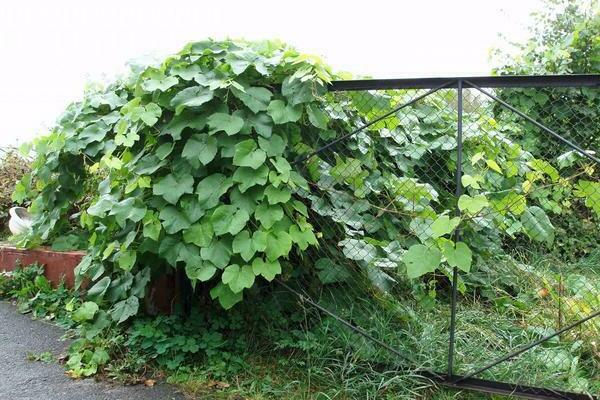 The mutated hybrid "Potapenko-7" was recognized. Or as it is mainly called the Amur breakthrough grapes. This varietal variety is used for culinary purposes. What happens very rarely with grapes of this kind. The Amur breakthrough is no worse than European varieties. It is a pure form of taiga grape that has been domesticated.

In 2018, the variety received official permission from the State Varietal Test to distribute it throughout Russia. This event was a significant breakthrough in the field of breeding. Because all the efforts and works of the famous breeder-biologist - Alexander Ivanovich Potapenko paid off. 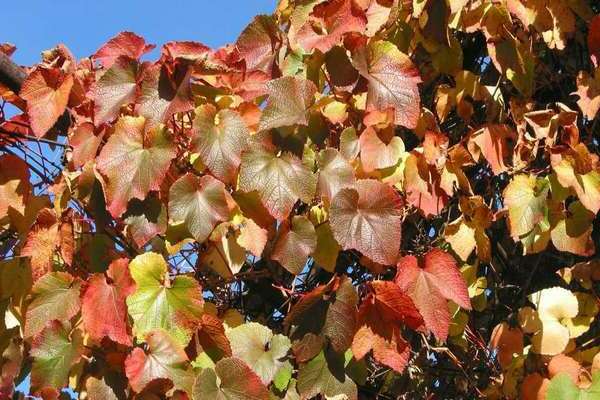 Dimensions (edit)... The grapes are very strong and vigorous. It grows very actively. Reaches large sizes in a short period of time.

Leaves... The foliage is light green in color. Shape: round, funnel-shaped with five lobes. The leaf is weakly dissected, rather large in size. Side cutouts are barely visible. Or they have the shape of the letter V. The notch of the petiole is of two types: closed or open.

The closed one has a gap in the form of a circle. The open is characterized by the shape of a lyre with a narrowed mouth. In front, the leaf is covered with small bubbles. There is a weak bristle behind with a small downy. On the edge of the sheets there are triangular denticles of various sizes. The tops are pointed, the base is of the average width.

Flowers... The variety has a female flowering type. There should be a bisexual vineyard nearby. They will fertilize each other. You don't have to spend extra time to pollinate flowers with your own hands.

The foliage in the autumn has a red tint. The brushes are shaped like a conical cylinder. Specific weight up to 0.5 kg. The branches are dense. The size of the brushes is usually above average. These are averages. There are shrubs of gigantic sizes. Ridge and berry legs are small. But nevertheless, they are very durable. 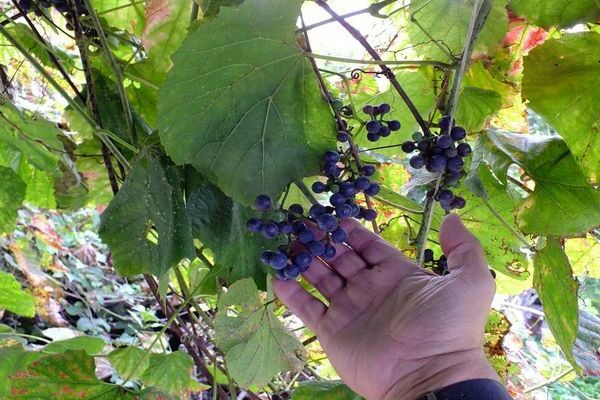 One berry weighs up to 5 grams, round in shape. In girth less than 0.15 cm. Fruits are very beautiful juicy dark purple color. The size of the fruits is almost the same. The taste is unique and interesting. The berry is fleshy and rich in juice. The juice yield is obtained according to special parameters - from 70 to 80%. The color of the juice is deep red.

The peel, despite its sufficient density, is quickly and easily eaten. The top layer is protected by a small amount of wax. The berry has a small pit. It does not impair the taste of the berry in any way.

The fruits are used for a variety of purposes. You can make delicious homemade wine from the Amur Breakthrough. Because the high sugar content in the berry will make the drink very pleasant and sweet.

Wine experts, of course, may not appreciate such a variety. For lack of refinement and nobility. But it should be noted that the vineyard grows in the northern area. Any other variety would not have taken root there. Criticism against the wine made from the berries of the Amur breakthrough will be irrelevant and not valid.

A large number of gardeners use fruits when preparing compotes, fruit drinks. And also preserves, jams, juices and, of course, wine.

The fruits can be eaten without additional preparation. They are not as attractive in appearance as the southern vineyards with large fruits. But in terms of taste, the Amur Breakthrough is not a bit inferior. The taster's score is 8.5 points. 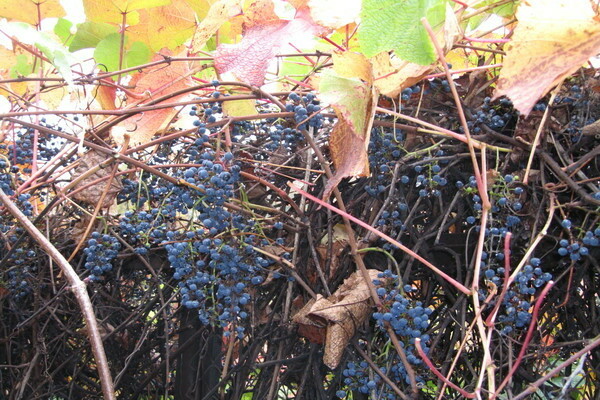 The crop shows poor storage capacity. But it is easy enough to transport it somewhere. The variety belongs to early maturing. The period of active growth and flowering is usually 4 months.

It happens that some varieties quickly ripen in the regions of the Moscow region and more northern places. Our variety, of course, does not have time to ripen quickly. But it must be taken into account that the vineyard can withstand high frost temperatures up to -40 degrees. Without using any winter shelters.

The variety has a long growing season. Nevertheless, the above listed advantages indicate that the variety itself is very unique and original.

A large number of berries grow on the shoot. One shoot usually fits from 2 branches. After the fruits are ripe, the total weight of the branch is up to 1.5 kg. The fertility of the variety is high - 200 c / ha.

From one shrub, given that it will grow to a height of about 30 meters in length, no more than 100 kg of berries come out.The plant is not affected in any way by the fact that it is loaded with so many fruits. After ripening, the berries can hang on the branches for a long time.

But this factor is rarely used. Because in the north, summer is usually very short. In rainy weather, the fruit does not crack. Wasps and bees do not harm the crop. For a variety, as a rule, a large presence of moisture is important. It is worse when there is a lack of it. In dry climates, the Amurskiy Proryv variety grows weakly and not very actively. 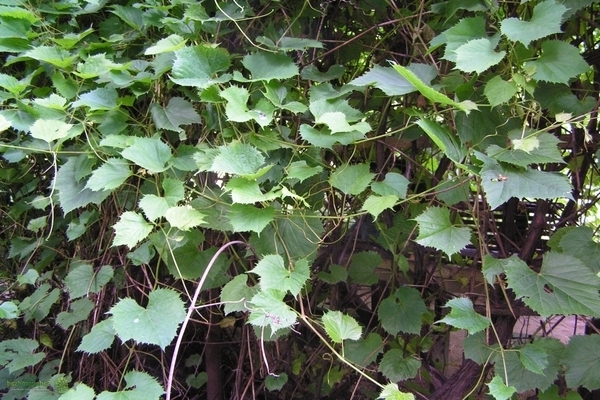 The variety is planted in climatic conditions close to those in which its wild ancestor grew. If you try to grow the Amur Breakthrough in the south, then, most likely, the vineyard will not grow. And he will not get used to conditions alien to him.

The shrub is planted in moist, loose and acidic soil. If a dry summer is coming, then the bushes will need to be periodically irrigated with water. The variety is propagated using cuttings or layering, which quickly and actively take root. During the year, seedlings of Amur breakthrough grapes stretch up to 3 meters.

Diseases and pests of the Amur breakthrough grape variety 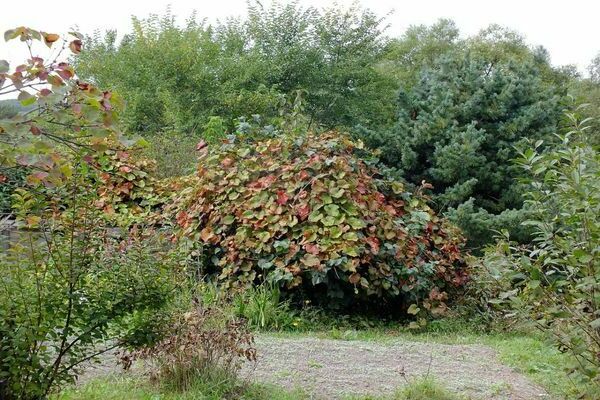 The variety is not particularly susceptible to disease attacks. But experienced gardeners recommend special measures for prevention. The shrub is sprayed with preparations containing copper to combat powdery mildew. You can also try any other drugs sold in stores.

The shrub is usually not covered for the winter. But if the area is characterized by high frost rates, then it is recommended to remove the vine in the fall so that the plant is covered with snow.

The bush is cut to fit certain shapes - an inclined cordon or a multi-arm fan, so that the shelter is very easy to make.

There were such cases that frost in some regions was very strong, and parts of the bush that were under the snow cover lived peacefully, after regrowing the bush quickly restored active growth.

During the spring cold snaps, the following situation was observed: at the beginning of the active growth of the age eyes due to the cold weather, some damage began to appear. The plant then began to grow as well and did not nearly get off its standard yield indicators.

The vineyard is beautifully woven into the arches and gazebos, which creates a pleasant green flavor. The bush also decorates multi-storey buildings.

Most gardeners do not prune the grapes, as due to the cold weather, the tops of the grapes usually freeze and shorten naturally.

If the shrub grows on a trellis, then the path of natural shortening will not work in this version. Pruning in this case is needed to form a beautiful shape in the vineyard, if you do not pay attention to this fact, then the bush will grow poorly.
But additional pruning is still required without relying on nature. 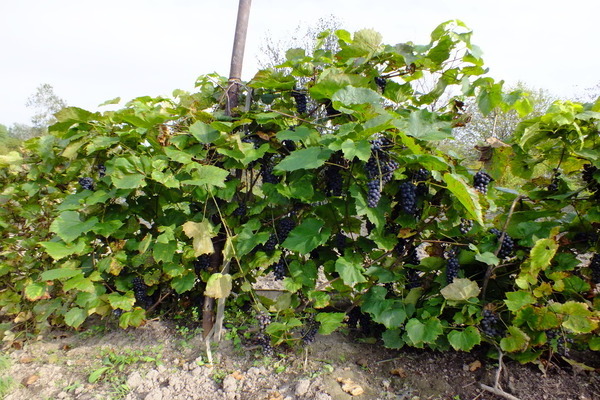 The Amurskiy Proryv variety is a very unique and original variety. In harsh climatic conditions, it bears fruit quite well. The vineyard does not require much maintenance, is frost-resistant, the berries have an attractive taste, they can be used in the preparation of culinary masterpieces.

Alexander Potapenko made a great contribution to the breeding development of the northern grape variety, I would like to hope that the work of the great biologist-breeder will be continued and improved. Russian harsh grapes will soon gain great popularity.

Japanese quince: how to properly plant and care for a plant

gardenex-en.decorexpro.com - Page 449 of 797 - Articles and materials on gardening 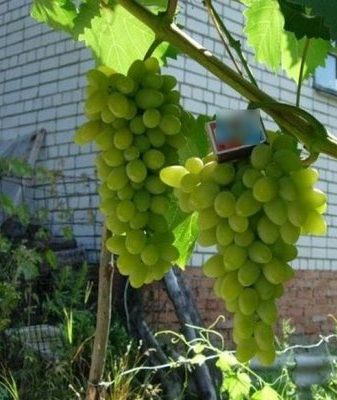 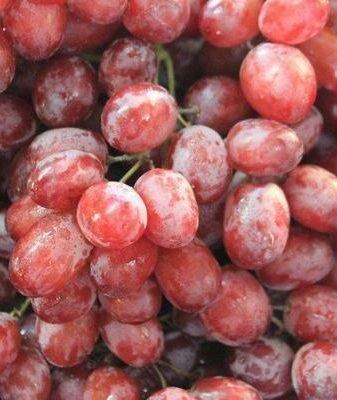 Julian grape
Grapes are a popular crop among domestic gardeners, because not only gives ... 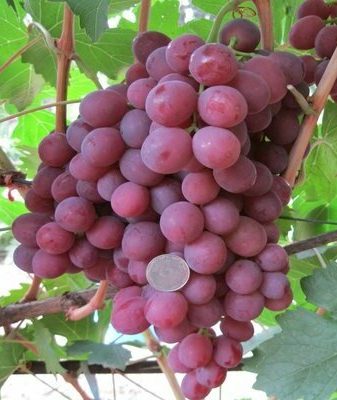