Tradescantia belongs to the Commelin family. This genus includes about thirty varieties. Wildly growing Tradescantia can be found in the tropics and temperate latitudes of the American territory. This plant was named after the gardener John Tradescant, he was in the service of the English king Charles the First and was the first to characterize this genus. Popular name - "Babi gossip", "saxifrage". 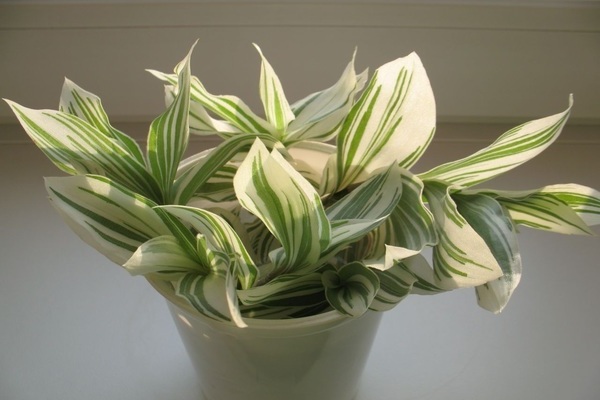 Tradescantia is a low herbaceous perennial, its stems are creeping or grow vertically. The leaves are arranged alternately, they can be of different types, it depends on the variety, they can be in the form of an ellipse, egg or lanceolate. Inflorescences are formed from the axils of the leaf tops. This crop is grown as ampelous vegetation and is very popular among gardeners. If you systematically pinch the bush, its splendor and branching are guaranteed. In frequent cases, the container with the plant is placed high on a shelf or in a hanging planter for free hanging of elongated stems. When the bush blooms, blue or violet-blue flowers form on it.

These flowers are also used to decorate aquariums. To this end, the Tradescantia is installed so that its stems are immersed in the water, and an attractive green carpet is formed.

Tradescantia also has healing qualities. It cleans the indoor air and neutralizes electromagnetic waves. Cut branches of this culture, which are placed in water, can stand in it for several months, or maybe for about a year. However, this requires systematic feeding into the water.

This culture is grown as an ornamental deciduous.

Illumination level. It is necessary to shade the plant a little, or provide bright illumination, but diffused. It is worth noting that variegated species need a lot of sunlight, but direct sunlight can be harmful.

Humidity level of the air. It grows well with an average air humidity in room conditions.

Top dressing. Fertilizers are applied only in spring and summer, systematically once every fifteen days, and organic fertilizers and minerals are applied in turn. It is better not to feed variegated varieties with organic matter.

The rest period is not strongly expressed.

Cut the bush in the spring.

Transplantation is carried out along with circumcision. Young bushes are transplanted annually, and adults - once every two to three years.

Soil substrate. You can buy ready-made soil for tradescantia. However, you can prepare the potting mix yourself. It is required to mix sod, deciduous and humus soil and sand in a ratio of 2: 4: 2: 1, respectively.

Propagate tradescantia by dividing the rhizome, cuttings and seeds.

Quality. Pale Tradescantia causes an irritating reaction of the skin. 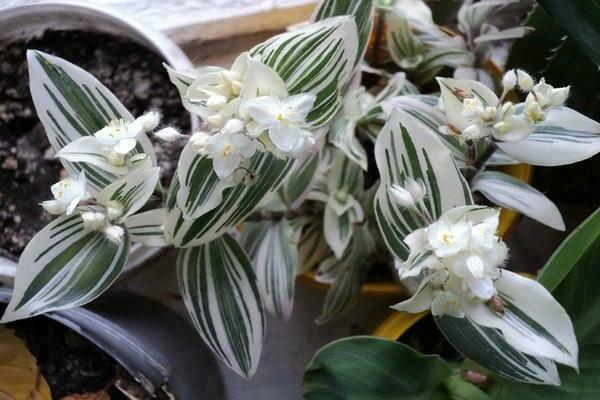 It is best to put the pot on the east or west window, and keep in mind that bright illumination must be diffused without fail. Tradescantia can also grow well on a north-facing window. If you put a container with a flower on the southern windowsill, then shading is required at noon.

The most whimsical to light are variegated varieties. With a lack of illumination, the color of the leaves will be simply green, and in bright light, the leaves will burn out. The variety that loves shade the most is white-flowered tradescantia. In summer, the flower is transferred to the garden area or balcony, and the place must be protected from drafts and direct sun.

In summer, the plant feels more comfortable at a temperature of about twenty-five degrees. In winter, he needs cool temperature conditions (twelve degrees, no more), but if you take care of him correctly, then it can perfectly endure wintering in a warm microclimate.

It is always necessary to ensure that there is no stagnation of liquid in the roots of the plant, because for this reason acidification of the soil substrate can occur. Thirty minutes after watering, excess drained liquid is drained from the pallet, the pallet is wiped with a dry cloth.

In the cool winter season (twelve to sixteen degrees), Tradescantia is watered after the soil clod in the container has completely dried out. The plant can do without watering for a long period of time, its strong weakening will occur, but it will not die.

Humidity of the air.

There is no particular need to spray the flower, but in the summer it is useful to systematically moisturize it from a sprayer.

In the spring and summer, top dressing is applied regularly once every two weeks. To this end, it is advisable to take turns fertilizing the flower with organic substances and minerals. But, if you grow variegated varieties, then do not use organic matter, because because of it, the color of the leaves can simply turn green. When the autumn season comes, they stop feeding, they continue to apply fertilizers only in the spring season.

When cultivated in indoor conditions, the flower can quickly age and lose its decorative effect. For example, the shoots may become naked. To preserve the beauty of the bush for a long time, it is required to systematically pinch the stems, and also cut it off a little every year. You should also remember about transplanting the plant into fresh soil mixture, it must be carried out on time.

Usually, the transplant is performed at the time of circumcision. Young specimens are transplanted more often, namely, once a year, while adults are transplanted once every two to three years. Before planting, a good drainage layer is laid on the bottom of the pot. For transplantation, a substrate is used that contains sod and humus soil, deciduous soil and sand in a ratio of 1: 1: 2: 0.5. Also, for transplanting, ready-made soil for tradescantia is used.

After contact with Pale Tradescantia, be sure to wash your hands, because it can irritate the skin.

Sowing seeds is carried out in early spring, for this purpose, a soil substrate is used, which contains sand and peat. For planting, a mini-greenhouse is being built, the temperature conditions in it should be within twenty degrees. Seedlings are regularly ventilated and sprayed. If the seedlings are properly cared for, then they will bloom for the first time after two years.

Cuttings are carried out in any season of the year. For this purpose, the stem is cut off and cut into cuttings ten to fifteen cm long.In one container, five to eight segments are planted, it is filled with a soil mixture containing compost and humus soil and sand in a ratio of 1: 1: 1. In order for the cuttings to take root better, the temperature conditions should be within fifteen to twenty degrees. Rooting of cuttings occurs rapidly, after a few days the roots should appear. And after six to eight weeks, they will turn into ornamental shrubs.

Poor growth. Elongation of shoots, reduction in the number of leaves due to lack of moisture or nutrients, due to poor lighting.

Greening the leaves. When cultivating variegated varieties, make sure that the illumination is optimal, otherwise the leaves will turn green.

The leaves are covered with specks. With a lack of liquid, there will be lethargy of the shoots, the surface of the leaves will be covered with yellow spots.

Pulling the plant. In winter, stretching of the shoots can occur, and at the base of them there will be drying and flying around the leaves. In this situation, rooted cuttings are used to rejuvenate the bush.

The monotony of the leaves. The leaves sometimes lose stripes and become the same tone. This is due to poor lighting and due to illiterate cutting or grafting.

In frequent cases, tradescantia can be affected by rot. When outdoors, slugs and aphids can harm the flower. 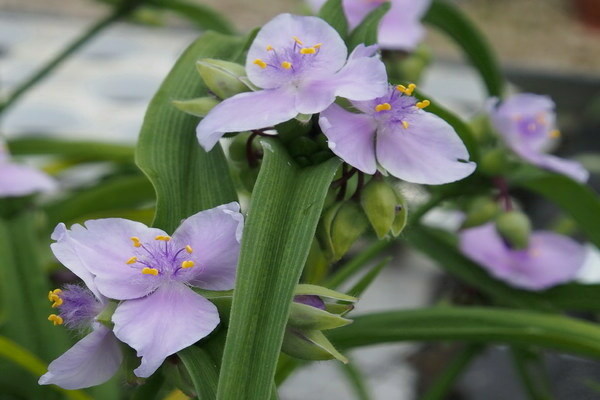 This variety is hybrid, bred for outdoor cultivation. Shoots of varieties of this variety branch, grow vertically. The leaves are lanceolate, purple-green. The flowers are flattened, their coloring can be white, pink, blue or purple, they are collected in umbrella inflorescences.

Tradescantia albiflora, or Tradescantia tricolor, or Tradescantia uiridis. Homeland - the tropics of the South American continent. The stems of this species are creeping. Leaves are bare, glossy, oblong, egg-shaped, about twenty-five mm in breadth, up to sixty mm in length. The color is silvery motley or green. In most cases, the formation of inflorescences occurs at the top of the shoots, but at times they are formed from the axils of the leaves. Small flowers are white in color. 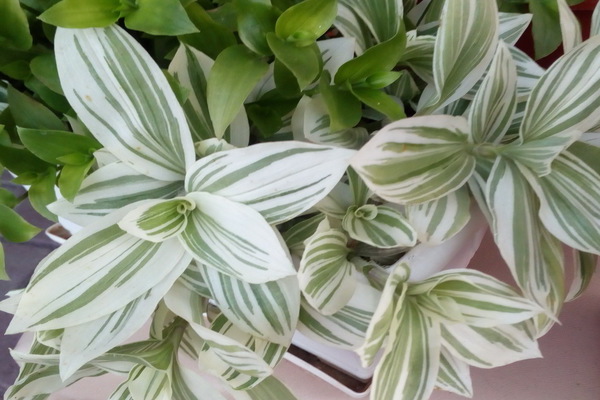 Tricolor. The leaves have stripes of white or pinkish-lilac color.

Albovittata. The leaves are decorated with white stripes.

"Aurea". The leaves are yellow in color, have green stripes.

"Aureovittata". The outer side of the leaves is decorated with stripes of golden yellow color, which are located along the length. 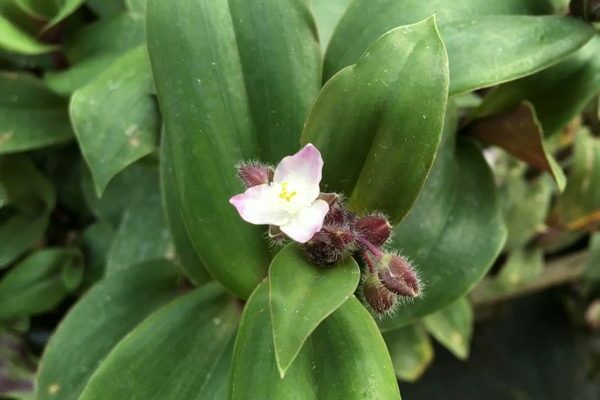 The wild-growing variety can be found in Argentine territory. This herbaceous perennial plant has greenish-red creeping shoots.The leaflets are arranged in turn, presented in the form of an ellipse or lanceolate, their apex is acute, the vagina is tubular. The leaves reach about thirty mm in breadth, they are about eighty mm long. The inner side is purple, while the outer is dark green with a reddish tint. The surface of the leaves, vagina and shoots is hairy. Elongated flower legs have dense pubescence, grow on the tips of the stems and from the leaf sinuses. On the lower part of the inflorescence, two bracts of different sizes grow. The flower contains three sepals and three petals. The surface of the sepals is of violet color and densely pubescent. The bottom of the stamens is covered with elongated white hairs.

There is such a species - variegata. On the adjacent right and left leaflets, there are similar patterns of large width yellow stripes. The patterns of the right and left leaves have differences. With illiterate propagation by cuttings or pruning and due to poor lighting, the pattern on the leaves may disappear. 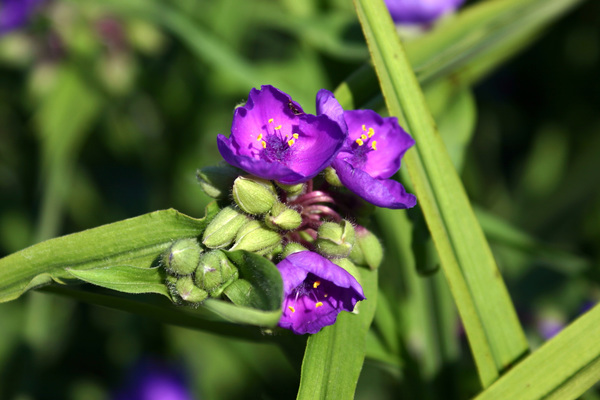 Homeland - the southeastern part of the North American continent. The shoot is knotted, erect and branches, growing up to sixty cm. The leaves are lanceolate, about twenty cm long, the shoot is enclosed by the vagina. Flowers of pinkish-purple color in cross-section reach up to forty mm, they gather in inflorescences-umbrellas, located at the top, consisting of two large bracts and three petals. The bush blooms in the July-August days. The fruit is a capsule that has valves along the length.

"Atrorubra". The inflorescences are colored blood-red.

"Rubra". The bush is decorated with red flowers.

Shoots are vertical, decorated with elongated leaves, the surface of which is covered with white hairs. The flowers are painted in lilac-pink colors.

Stems are red, bare, spreading or drooping. The leaves are egg-shaped, about fifty mm in breadth, and grow up to one hundred mm in length. The outer side has two longitudinal stripes in a silvery white color, the inner side is red. Small flowers are purple or violet in color.

This variegated species can be found wild in the Mexican territory and in Peru. The stems are spreading, not pubescent. The leaves are small, in the form of a boat and an egg, reach about ten mm in breadth, and their length is up to forty mm. The leaves are sharp above, keeled below, their edges are ciliate, the surface has a large number of purple dots. Inflorescences are formed at the top of the bush, they have pink flowers in their composition.

Shoots are densely covered with small green leaves, the surface of which has stripes of white or pink colors. This vegetation is highly decorative. 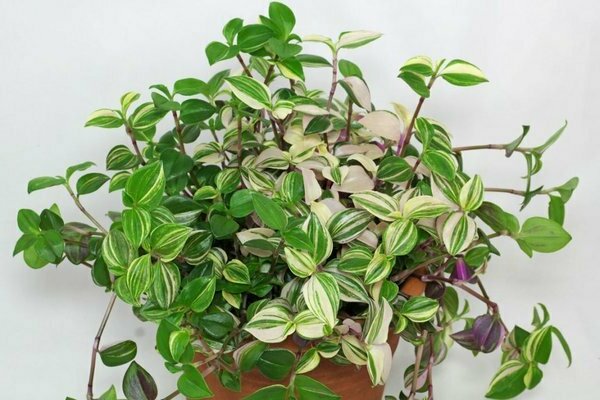 This vegetation comes from Brazilian territory. The stems are creeping, painted in purple-red colors, their surface has a large number of green spots. The leaves sit on shortened petioles, they are presented in the form of an egg, reach twenty mm in width, and about twenty-five mm in length.

"Variegata". The leaves have cream-colored stripes.

Quicksilver. The leaves are decorated with white stripes.

Heating boilers for a country house: ALL advantages, photo

Unusual plants are the most exotic representatives of nature