Most often, the presence of a shady area at a summer cottage looks like a scourge for an inexperienced gardener. It is best to grow herbs in such an area that respond positively to the shade. Unfortunately, such a beautiful flowering plant as Tiarella has not yet gained its fame, but in vain.

Tiarella flower presents acts as an evergreen groundcover, which is ideal for growing in a shady area. Most of the varieties that belong to the Saxifrage family are perennial plants, and there are also those that are grown in our country as an annual plant. in the wild, the plant can be found in various regions, for example, in the climatic zone of the warm states of North America. Some species can be found in Korea and China. There are varieties that grow well in Japan.

Tiarella is a herb that is easy to grow. The plant is unpretentious about its care, tolerates cold well, loves shady places. In our country, perennial plants are suitable for growing in a region with warm, snowy winters, and are also well suited for growing at home. 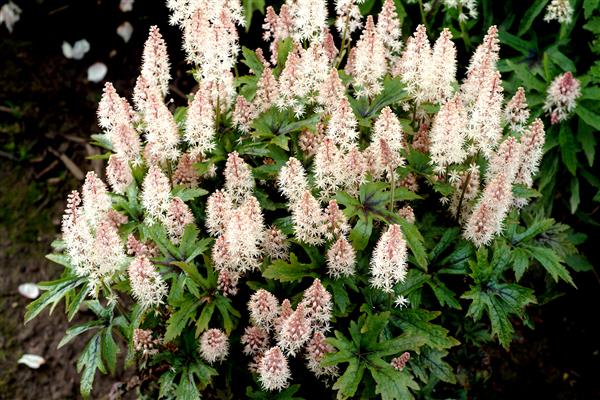 If you pay attention to the botanical description of the Tiarella plant, then you can find out the following. Tiarella is a low herbaceous shrub. Foliage is divided into basal petiolate and sessile stem. In summer, it can have a dark green color, with dark purple spots and clear veins with a bronze or purple color. In autumn and winter, the foliage of the plant begins to acquire a golden-red color. Flowers are small in size, star-shaped. The corolla is formed by 5 pointed petals. Tiarella buds form large inflorescences, racemose, which are characterized by the crowning of the tops of long (up to 60 cm in length) flowering stems. flowering time falls on May-end of June. After that, the formation of fruits begins - fleshy two-chambered capsules with seeds of brown or black color. Herbaceous perennial is able to form small bushes. The plant has a weak root system, rapid growth is characteristic, therefore, a ground cover crop emerges from the plant. Some gardeners are cultivating this plant in order to plant greenery next to tall shrubs and trees. Due to their external resemblance to a tree such as Heuchera, these plants are often confused. Tiarella does not differ in abundant flowering and is most often used as an ornamental deciduous ground cover.

Tiarella: species and varieties with names

Only a few botanical varieties are known that have been studied and grown by flower growers. The most popular is such a variety of Tyarella cordifolia, which includes a large number of natural and hybrid varieties. This plant variety is widespread due to its high resistance to frost. In the wild, the plant can be found in Scotland and Alabama. The height of Tyarella cordifolia can reach up to 20 cm, taking on the appearance of a large herbaceous shrub with a spherical shape. The foliage of the plant is round, heart-shaped.On the shoots, you can see the presence of young antennae, which enable the plant to grow in width. The leaf surface is characterized by the presence of clear veins with a bronze or golden tint. The buds are collected in large inflorescences with a cyst shape. The perennial has abundant and long flowering - for 1 month, starting in May. Let's dwell on the most popular varieties of the variety: 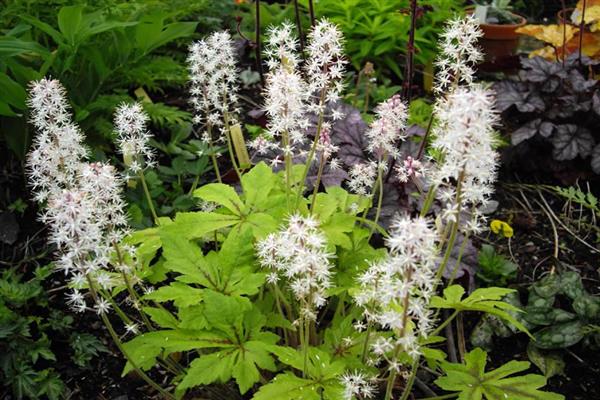 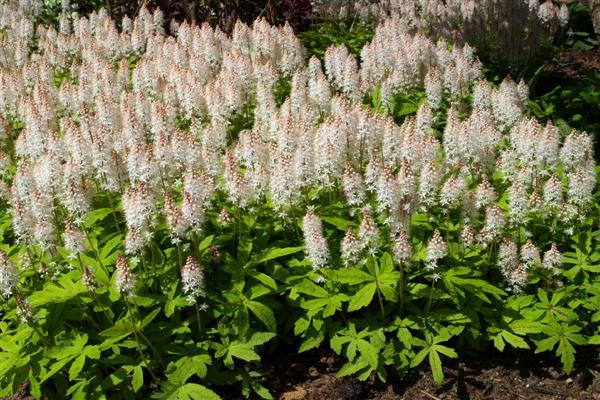 Tiarella Apalachian: photo of the variety 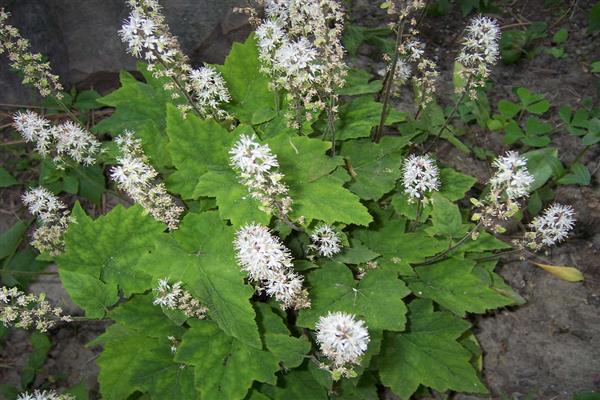 Tiarella Veri: photo of the variety 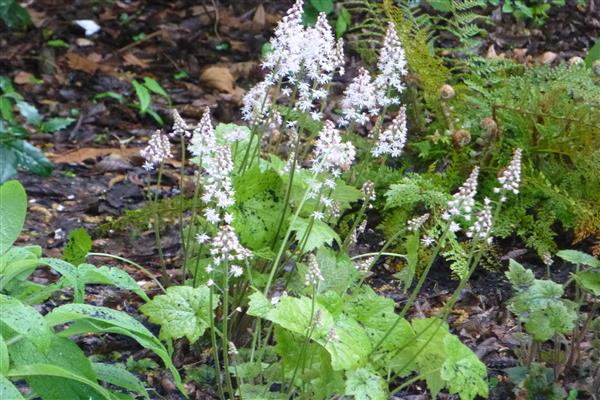 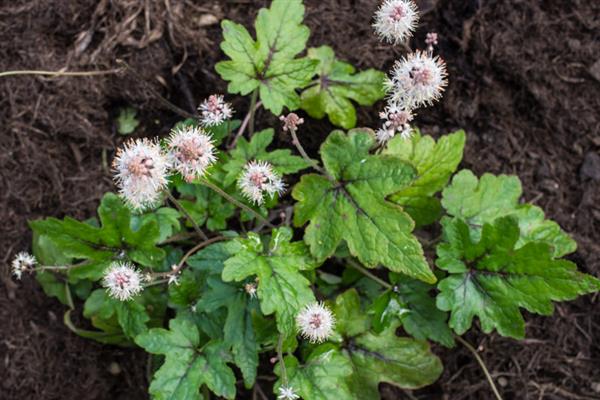 Tiarella Ninja: photo of the variety 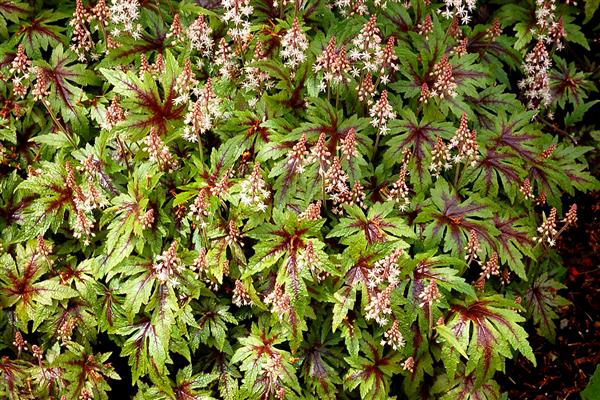 Tiarella Starbust: photo of the variety 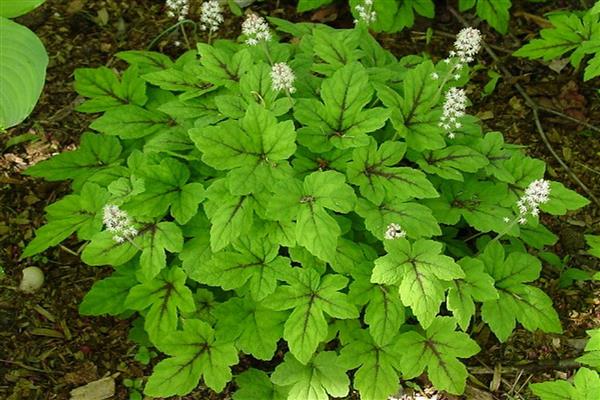 Tiarella: planting and care in the open field

In order for the Tiarella plant to grow and develop well, it will be necessary to perform a number of care measures. To grow a plant, the area must be shady. In order for the plant to retain its decorative appearance for a long time, it is best to plant it in an openwork shade. If the Tiarella plant is exposed to direct sunlight, the plant may lose its beautiful and picturesque appearance. The sun's rays can cause sunburn on leaves and flowers. Thus, the plant will finish its flowering several times faster.To grow a Tiarella flower, the soil must be light, no matter where the plant will be grown, in the garden or at home, in a pot. The soil should be loose and moist. It is best to choose a slightly acidic and neutral composition. An acidic environment can provoke rotting of the root system. 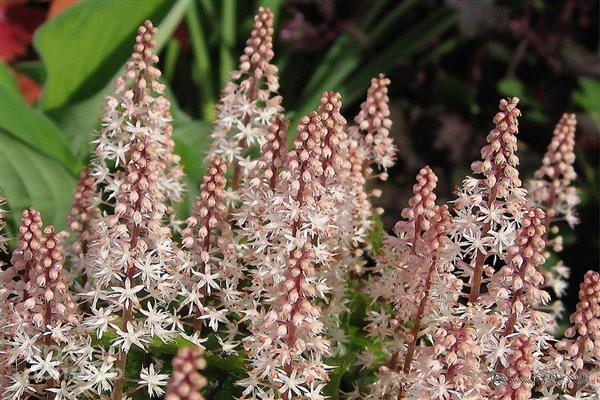 You can propagate the Tiarella plant using vegetative methods - using the division of the bush or rosettes of leaves. In both options, planting of planting material should be carried out immediately to a permanent place where the plant will be grown. the bush must be dug out and cleaned of an earthen clod and divided into several parts so that the length of the divisions is no more than 5 cm.It is also allowed to grow a young plant for some time in a container with peat, sand and ash, as well as a large amount of organic fertilizers ... When growing a young Tiarella, it will need to be watered often. If you decide to carry out Reproduction using rosettes, then you will need to prune the daughter plant from the mother bush and root it in the nutrient soil until you notice the appearance of 2-3 new leaves. Many growers say that a plant can be propagated by self-sowing, after which it becomes a weed. If you want to avoid such a situation, then you will need to collect fading inflorescences in time. If you want to use the generative propagation method, then you will need to sow the seeds first for seedlings. It is not necessary to make a pick, since the plant has a weak root system, if you damage it, that in 80% of cases the plant does not survive. Sowing Tiarella seeds for seedlings is best left at the beginning of March until the end of April. Watering mode. It is very important for Tiarella to keep an eye on the watering regime. Watering should not be too frequent, but overdrying the soil can cause various kinds of diseases to appear when using the division of the bush, but not more often than once every 2-3 years. Fertilizers should be applied with alternation of mineral and organic fertilizers, during active life, once every 2-3 weeks. 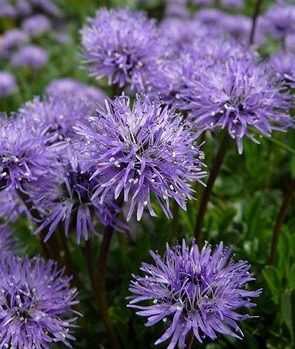 Globularia
Globularia is a perennial herb. Stretches up to 65 centimeters .... 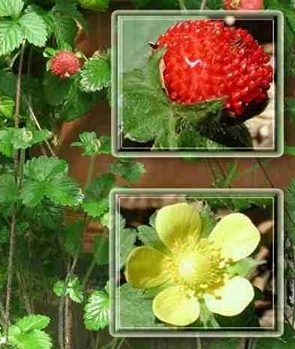 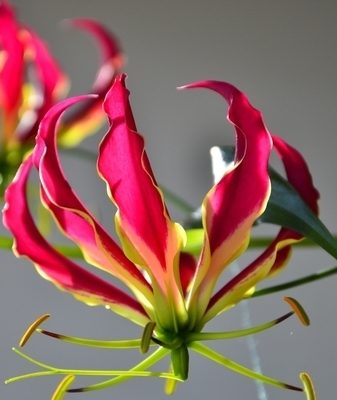