The article presents a collective farm Plum Renklode: a description of the variety, a photo, a planting guide. growing, care, protection. 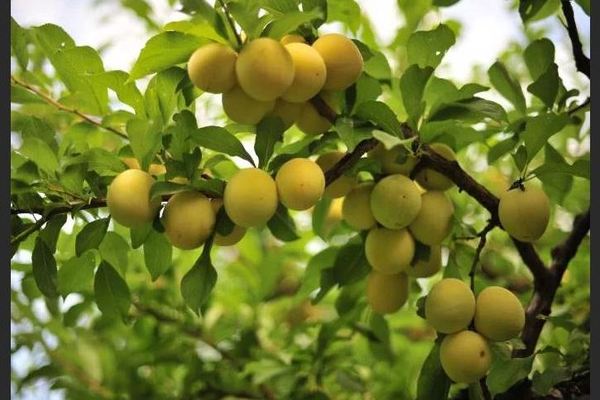 Plum Renklode kolkhoz is a very popular variety of plum, which was bred for a very long time and is still very popular among gardeners. The thing is that the tree tolerates even the most severe winters very well, therefore it can be grown practically throughout Russia. In addition, the plum yields a large yield every year and is easy to grow.

The plum variety Renklod kolkhoz belongs to home plums, which have early ripening dates. The tree is considered compact, as it does not exceed 3 meters in height. Moreover, its crown has a rounded shape and is not very thickened. The bark has a smooth surface and a gray tint.

The color of plum shoots Renklode collective farm is dark red with sparse dots on them. The leaf plates have a light green tint. They are smooth, shiny and medium in size to the touch. The shape of the leaves resembles an ellipse. The edge may be wavy. During flowering, small white flowers form on the tree. The fruits are round in shape, the weight of each fruit can be 200 grams. The shade of the fruit is yellow here, maybe a little greenish. The entire fruit is covered with a thin peel, under which specks are pronounced. The pulp of the fruit has a yellow tint. It tastes very good with a lot of juice. The stone is very easily separated from the fruit itself.

The taste of the pulp is sweet with a subtle sourness. The fruits contain a large amount of sugars and other beneficial acids. In addition, the fruit is highly rated in the tasting test. Plums of this variety are used fresh and used for preparations: canning, making jam, marmalade, boiling compotes and confiture.

The plum variety Renklode kolkhoz was bred by the famous scientist Michurin. He obtained a hybrid by crossing plum varieties such as Ternoslum and Renclode green. As a result, the hybrid turned out to be a very advantageous option, since it absorbed the positive characteristics of the parents.

In the middle of the 20th century, the Renklod kolkhoz plum was officially registered and recommended for cultivation in the central part of Russia, as well as in its North-Western territory. 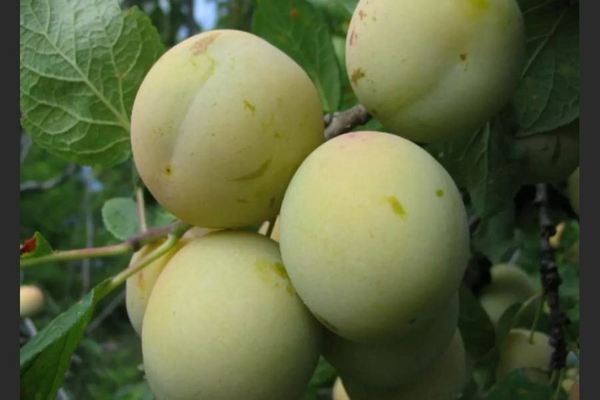 As mentioned above, the yellow Renklod kolkhoz plum gives a stable large yield. In addition, the culture begins to bear fruit after four years. One crop can bring about 7 kg of plums. As they grow older, the fruits become even more. So an eleven-year-old culture can produce more than 40 kilograms of delicious plums.

The harvest of the Renklode kolkhoz plum is usually harvested at the end of summer. Plums ripen at the same time, and the tree loses its shape under the weight of a large number of fruits. However, if the crop is harvested at the wrong time, then the fruits may fall off, spoiling their external and taste qualities.

Plum Renklod kolkhoz is highly valued for its high resistance to frost, because even in a harsh winter, flower buds do not tend to freeze.Only some areas of wood, as well as small twigs, can freeze. However, these tissues regenerate very quickly and do not affect the amount of the crop. Also, the plant is not afraid of sudden changes in temperature, which are typical for some regions of Russia. The bark of the tree helps the plant not to succumb to the negative effects of sunburn, as well as frost.

Plum Renklod kolkhoz is not a self-fertile plant, therefore pollinators are needed for it. It is also impossible to cross this variety with a Chinese plum. It is best to plant two or three more varieties from other groups of home plums on the site. For example, Skorospelka, Moskovskaya and other varieties will be the best pollinators for the Renklod collective farm plum. 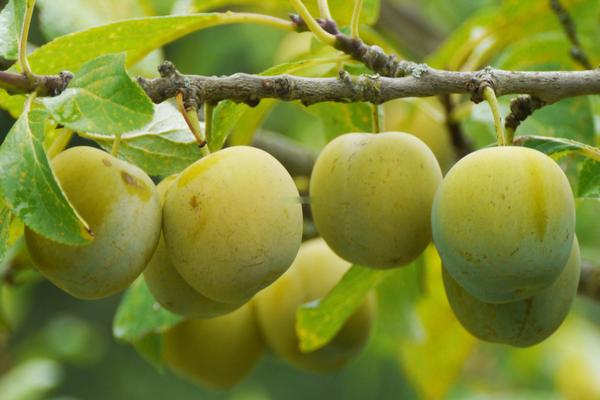 In central Russia, the optimal time for planting is spring. You can plant the yellow collective farm Renklod plum in the fall, but there is a risk that the tree will not have time to take root and may freeze in winter. If the seedling was purchased exactly in the autumn, you can simply dig it in and properly cover it with spruce branches, and also cover it with snow all winter. Thus, the tree will not be afraid of severe frosts.

The place for planting the plum Renklod kolkhoz must be chosen open, sunny, protected from drafts. It is better to plant a plum on the south side of the site, and you also need to make sure that there are no shading structures or large trees nearby. Sandy soil or loam is suitable for better growth. In this case, groundwater should lie as deep as possible.

It is necessary to prepare the landing pit in advance. It is usually done in the fall. In this case, the diameter of the pit should be approximately 70 cm in all directions. If there are several trees, it is better to maintain a distance of 3 m between them. The soil must be nutritious, therefore, to add fertilizers, it is necessary to dig it out and mix with compost. Ash can also be added. If your site is characterized by acidic soil, lime is also added to it. You can also add minerals instead of organics. For example superphosphate and potassium sulfate. Everything is properly mixed and filled back into the pit.

To facilitate further care of the collective farm Renklod plum, it is best to drive in a support stake immediately during planting. Then you need to make a small elevation and place the seedling on the center, evenly distributing all the roots in a circle. It is also important to position the seedling so that the peg is on the south side. After planting, it is necessary to fill the hole and shake the seedling a little more so that excess air comes out.

During planting, care should be taken that the level of the root collar is several centimeters higher than the surface of the ground. After all the work has been done, it is necessary to create a small groove around the trunk in order to then water the tree. Three buckets of water will be enough for watering, after which it is necessary to immediately tie up the seedling and lay out a good layer of mulch. Next, you need to water the seedling several more times if it does not rain.

Rules for caring for the plum Renklod kolkhoz

Plum Renklod kolkhoz loves moisture very much in comparison with other fruit trees, therefore its deficiency will negatively affect both the fruits and the leaves of the plant. If the summer is dry and there is little rainfall, you should water the plum abundantly at least 5 times. If we are talking about a young tree, then it is necessary to add 60 liters of water per tree, and twice as much for adult trees. After watering, it is necessary to check that the soil is 40 cm moist. The laid out mulch material will help to facilitate the task, as which experienced gardeners use compost.

After watering the collective farm Renklod plum, it is imperative to loosen the surface. You also need to weed the weeds and regularly dig up the soil under the drain in the fall.It is necessary to remove unnecessary growth in time, which negatively affects the amount of the crop.

Also, the yellow plum Renklod kolkhoz is fed with fertilizers. They can be applied as early as a year after the tree is planted. Organic matter is applied every three years. Organic fertilizers are added when feeding in the fall. This will be humus or compost can be used. You also need to add superphosphate and potassium sulfate. In the spring, the plum should be fed with ammonium nitrate along the perimeter of the trunk.

Like any tree, the Renklode kolkhoz plum needs annual crown formation. Thus, it is necessary to form five or six main branches, between which the distance will be about 40 cm. Every three years it is necessary to shorten the branches by a third.

After the tree is formed correctly, only sanitary pruning should be carried out, which removes branches growing inward, as well as dry, diseased and old branches.

Since the plant is highly resistant, no additional procedures are needed before the winter period. However, if the seedling is still young, then it is better to insulate it a little, namely to spud it with a layer of sawdust and overlay it with spruce branches.

You can insulate the trees by building a small hut around it, and covering it with straw or dry grass. Everything should be tied tightly and spud several times.

Protection against diseases and pests of plums Renklod collective farm

Plum Renklode kolkhoz is very resistant to many common ailments, especially when it comes to fungal infections. However, it will not hurt to carry out preventive procedures, which consist in the timely destruction of diseased branches, collection of fallen fruits and leaves. Also, after formative or sanitary pruning, it is necessary to process cuts and cracks. For this, you can use a solution of lime or copper sulfate.

Plum sawfly or plum moth are isolated from pests. In order to protect plants from these insects, it is necessary to process the tree with karbofos or chlorophos in the spring.

If the parasites have already attacked the Renklode kolkhoz plum in large quantities, it is necessary to carry out the procedure several times, remove all affected parts and fruits, since they may contain larvae of insect pests.

When the plum moth is attacked, it is necessary to use biological preparations: bitoxibacillin or lepidocid. Processing is also carried out repeatedly with a break of 10 days.

Some gardeners also use trapping belts, traps to fight parasites, and also dig up the ground and remove falling fruits.

Plum Renklod kolkhoz is an excellent option for growing on the site, since it has a very large number of advantages. Observing simple rules of care, you can enjoy the delicious harvest that the tree gives in large quantities and every year.

Spruce on the windowsill + how to grow spruce? 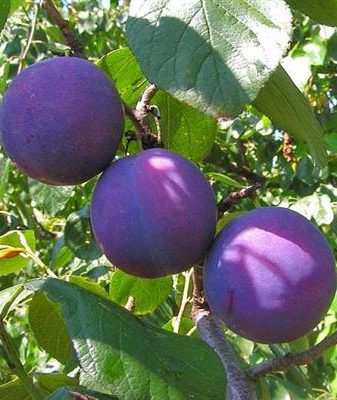 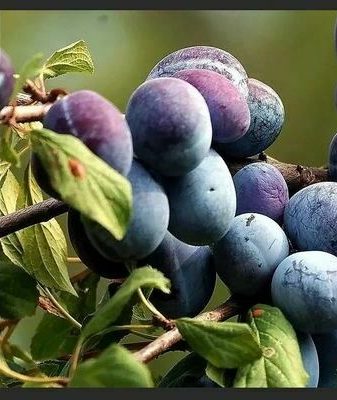 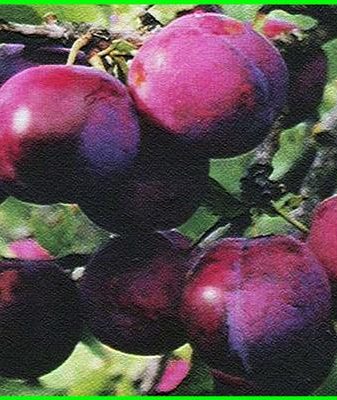