When choosing plum plants for their garden, mid-latitude gardeners first look for winter tolerance and high yields. A large number of plums have these properties. And not in the last position is the Eurasia 21 plum. The Eurasia 21 plum is a fruit of excellent taste and aroma. But the variety differs in its characteristics, which must be taken into account when cultivating. 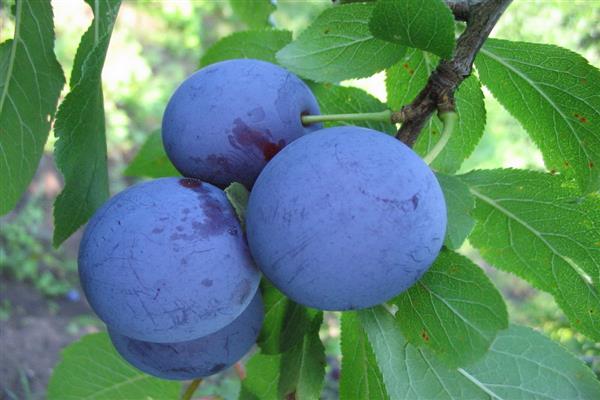 Plum Eurasia 21 is a table variety that ripens early and belongs to the type of domestic plum varieties. It is a large tree, reaching a height of about five meters, its crown is half spreading and not very dense. The bark covering the trunk and branches is gray in color. Due to its large size, the variety is often grown on a rootstock of low growth.

Round plums are very decorative in appearance. The peel is thin, dark blue in color with a burgundy tint, it is covered with a continuous wax bloom of a bluish color.

The plum variety Eurasia 21 is cultivated for the consumption of fresh plums and for preserving them. Fruit juices, preserves, marmalades, marmalades, and confitures come out with excellent taste. But due to its looseness, the variety is not suitable for making compote.

Plum Eurasia 21 was bred by breeders of the Voronezh Agrarian University. It was obtained by a complex crossing of different types of plums.

The authors of the Eurasia 21 plum variety are scientists A. G. Turovtseva, A. N. Venyaminov.

After the state probationary period in 1986, the variety was included in the state register, it is recommended for cultivation in the Central Black Earth Region. Also, Eurasia 21 plum is often found in garden plots of middle latitudes and the Moscow region.

Plum Eurasia 21: features of the variety 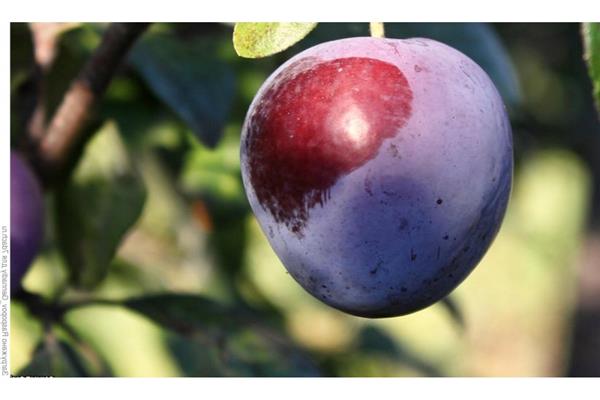 The plum variety Eurasia 21 is distinguished by its early maturity. Fruiting begins from the fourth year of development. The yield is high, but not regular.

If the days in May are cold, with a lot of rainfall, then flowering will be poor and there will be practically no fruit set.

But in good seasons, you can remove up to fifty kilos from one plum or more. Fruit ripening occurs in the first or middle days of August.

Winter resistance is quite high than that of other domestic plum varieties.

Wood and flower buds are resistant to freezing, and the root system can withstand temperatures up to minus twenty degrees.

In addition, the plum is used as a seed and partly clonal rootstock. Plus, the plant is used to produce new varieties.

For reference. The plum variety Eurasia 21 is not self-fertile. He needs helpers-pollinators who bloom at the same time with him.Plum pollinators Eurasia 21: "Memory of Timiryazev", "Mayak", "Volzhskaya krasavitsa", "Skorospelka krasnaya".

Plum Eurasia 21: planting and caring for the variety 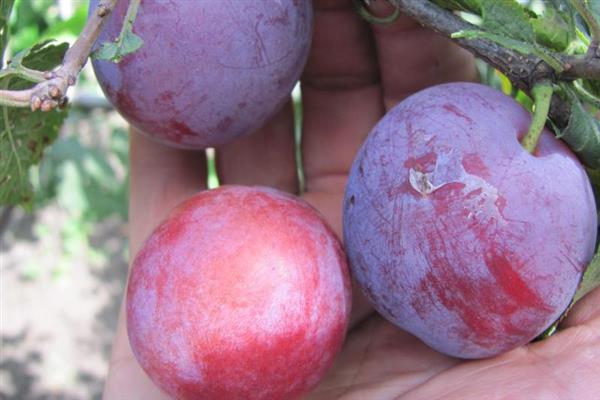 It is advisable to plant Eurasia 21 plums in the spring season before the buds swell. The site for planting is selected elevated, illuminated, warm.

The plum tree loves to grow on moist and light soil of neutral acidity. Optimum - light loam. It is recommended that groundwater flows at a depth of at least two meters from the surface soil layer.

The planting pit is prepared in 2-3 weeks or in the autumn season. In depth, it should be from sixty to seventy cm, in diameter - from seventy to eighty cm.

A very compacted bottom is loosened with a crowbar or shovel twenty-five cm deep. You can throw eggshells into the hole, this will be useful for the plant.

Make sure that the root collar is five to six cm above the surface soil layer.

Upon completion of planting, the soil is compacted around the circumference of the plant and spills well with two or three buckets of water. The seedling is tied to a stake, the trunk circle is mulched with sawdust or humus to retain the liquid.

In the first year after planting, top dressing is not necessary. For 2 years and thereafter, before fruiting, twenty grams of urea are applied per square of the trunk circle.

Fruiting trees in the spring season are fed with urea and nitrogen-containing mixtures, and in the fall - with potassium and phosphorus.

If the soil is fertile, organic matter is applied 1 time / 3 years. Each gardener chooses the feeding mode independently, depending on the climate, soil composition and tree condition.

It is important to water the plum tree correctly, as it is more moisture-loving than other fruit plants. From the spring season to the August days, watering is carried out four to five times: first, before the buds bloom, then every twenty days.

One tree needs five buckets of water. When watering, do not overdo it - excessive moisture in the soil can destroy the plum, the fruits can crack and fall off.

Loosening the soil around the trunk is as significant a manipulation as watering. The trunk circle must be kept clean, it is necessary to remove weeds in a timely manner and mulch the soil.

Plum can form root shoots, depressing crops and contributing to lower yields. To eliminate this, the soil is raked out at the base of the trunk and the growth is completely cut out. This manipulation is carried out four times during the summer season.

In the first years after planting, the plum is cut to form a crown. At a tree of one year, five to seven main branches should be left and in the next three to four years they should be shortened by 1/3 in the spring season.

After the tree begins to bear fruit, a conductor is cut over the largest and most developed branch. This is how a cup-shaped crown is formed, which is best illuminated by the sun's rays.

Further, in each spring season, a sanitary and anti-aging tree pruning is performed.Thin the crown, remove frozen, dried and diseased branches. Also cut off the branches that grow inside the crown and twigs growing perpendicularly. It is undesirable to cut off shortened branches up to thirty cm in length. 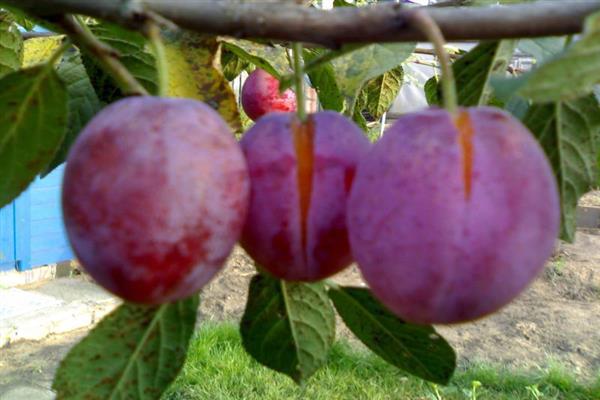 Plum Eurasia 21 has an average immunity to diseases. The greatest danger to plums is represented by fruit rot (moniliosis) and clusterosporiosis.

Prevention is required to protect the fruit from fruit rot. In the autumn season, the soil is dug up along with the leaves, the infected shoots and branches are removed, and the carrion is collected and destroyed. Before the plum blooms, and after flowering, treatment is carried out with copper oxychloride or Bordeaux liquid.

The same measures will protect the tree from clasterosporium disease or perforated spot. This disease is manifested by the fact that brown spots appear on the leaves and fruits.

Harmful insects that attack the plum: plum sawfly, moth, aphid. The sawfly carrying out wintering in the ground is destroyed during the spring digging of the soil in the near-trunk circle. If the pest does not care, then it is destroyed by the preparations "Karbofos", "Cyanox", "Iskra", treatments are carried out before and after the flowering period.

They will be rescued from the moth: "Confidor", "Benzophosphate", "Aktara". Sprinkle the plums five or six days after the tree has bloomed.

On the 15th of June, the moth caterpillars gather in hunting belts. Caterpillars that go into the soil for pupation are removed by regular loosening of the soil every eight to ten days.

Without a doubt, the Eurasia 21 plum variety has few drawbacks to consider when choosing a seedling. But the variety also differs in its merits, if you take good care of the plum, you can get a good yield of pleasant-tasting and decorative fruits.

Sowing peas: TOP secrets of application with a description and photo 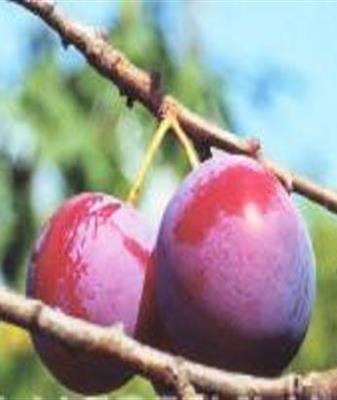 Plum Renklode Kursakova
Plum Renklod Kursakova was obtained as a result of the work of breeders. Have created a hybrid by ... 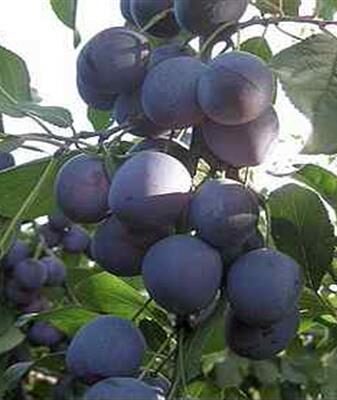 Plum Zhiguli
Plum Zhiguli was bred by E.P. Finaev and P.P. Ivanov on the basis of the Kuibyshev Experimental Station ... 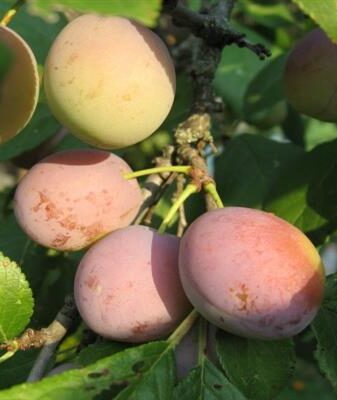