Today, growing gooseberries on a trunk is gaining more and more popularity. There are several reasons for this. The most obvious of them is the high decorative qualities of this garden form: the traditional sprawling bush, as the stem forms, transforms into an elegant tree with a spherical crown. Meanwhile, the standard gooseberry has other advantages. Thus, plants grown using this technology are less susceptible to fungal infections. In addition, caring for standard gooseberry forms is much easier than for familiar bushes. Loosening the ground in the near-trunk circle, weeding, watering, fertilizing, pruning in the case of standard gooseberries are quite simple and even pleasant processes.

The opposite of them is the sometimes very laborious efforts to care for dense overgrown gooseberry bushes, when the gardener is forced to spend a long time, bending over to the lower branches, often sticking to the ground. The lesser density of the crown of the standard forms provides access to sunlight to the berries, which grow larger and have a richer taste. Harvesting a standard gooseberry can be done quickly enough.

It is not surprising that the growing of gooseberries on a stem is becoming more common. We will tell you about how to properly form a stem and how to care for this form of a plant in this article. 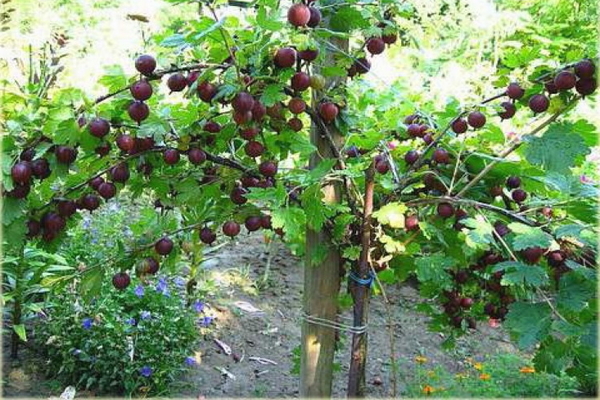 First of all, you should understand what is, in fact, a stem? This term comes from the German language: in translation "stamm" means a trunk. Thus, the stem refers to a part of the tree trunk, from the root collar to the lowest skeletal branch.

The technology of growing standard forms of plants is reduced, by and large, to the allocation of one of the strongest and most direct shoot, which becomes the stem. All other shoots and branches, as well as the shoots that appear over time, are methodically removed. As the trunk grows, it becomes easier to trim off unnecessary parts of the plant. It is also necessary to pay attention to pruning the branches of the crown in order to give it a certain shape - as a rule, spherical. Sometimes the standard gooseberry is grown on the basis of several adult branches.

Such an unusual form suggests that the process of its creation is unjustified, which is why many gardeners do not dare to grow standard gooseberries. Meanwhile, compliance with certain rules and recommendations will allow you to successfully form the standard form of a gooseberry bush and get a rich harvest of large sweet berries. 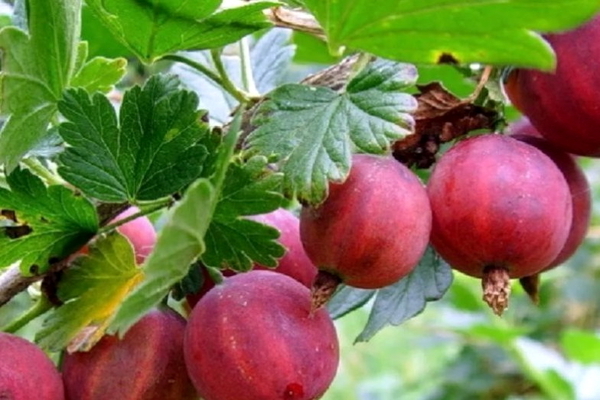 It has a medium early ripening period, bears abundant fruit with red-pink large berries weighing up to 6 g each, has winter hardiness and good disease resistance; 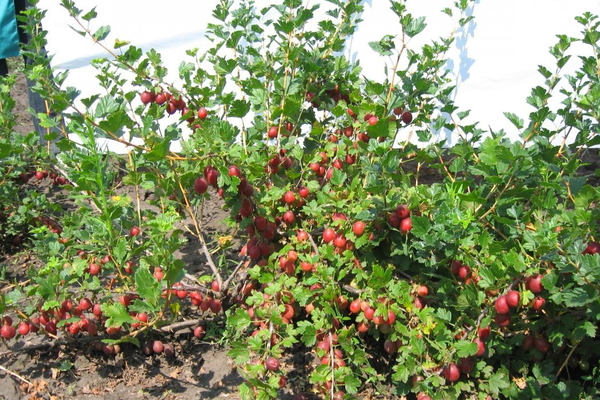 It also belongs to medium early varieties, differs in a small number of thorns on the shoots, productivity, resistance to frost and diseases; 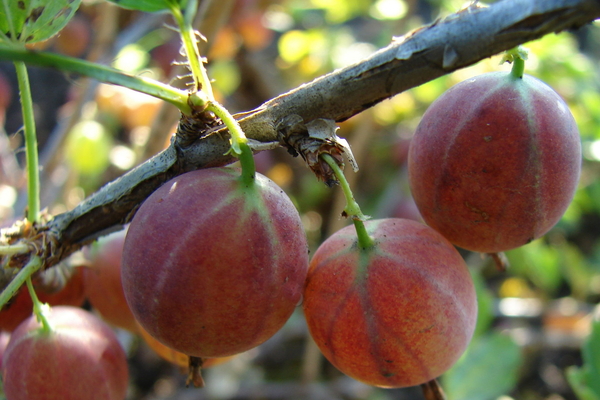 It has an average ripening period, brings cherry-colored berries with an unusual dessert flavor, with an average winter hardiness, it is very resistant to infections; 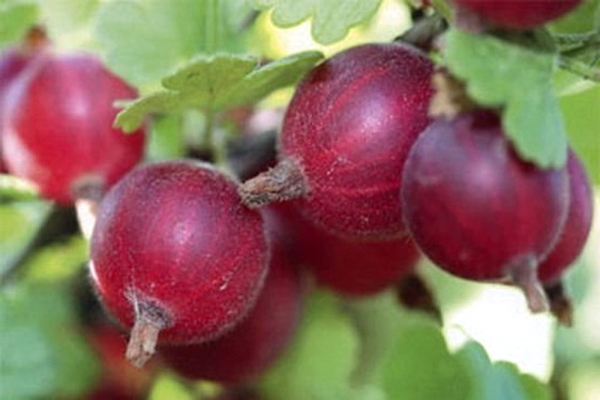 It belongs to medium-late varieties, it is considered the most resistant to severe frosts, drought and diseases, it is recommended for cultivation throughout Russia, with the exception of the Urals; 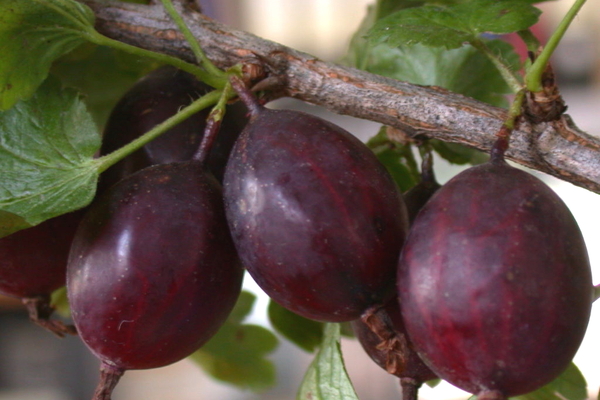 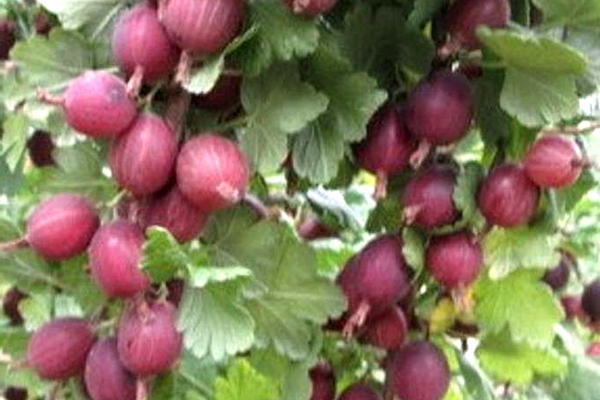 The variety is a medium-sized, spreading shrub with medium-sized leaves of a dark green hue, which blooms with large flowers, painted in green-red tones. Rounded berries are of medium size and irregular red-violet skin, covered with veins and hairy bloom. The taste of the berries is sweet and sour. 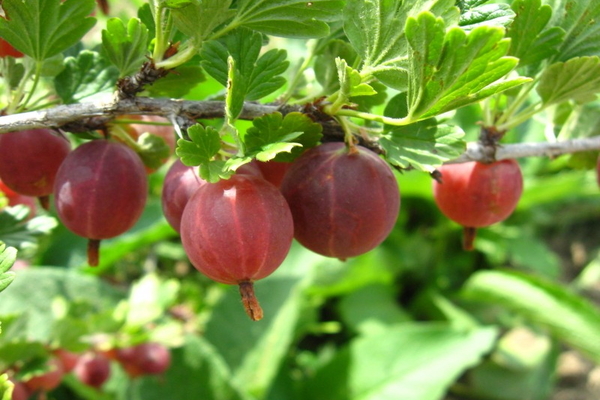 A medium-sized variety, the bushes are usually quite compact and can yield up to 6 kg of berries per each (4-5 years after planting). The fruits are distinguished by a unique dessert taste, are round and dark red in color. 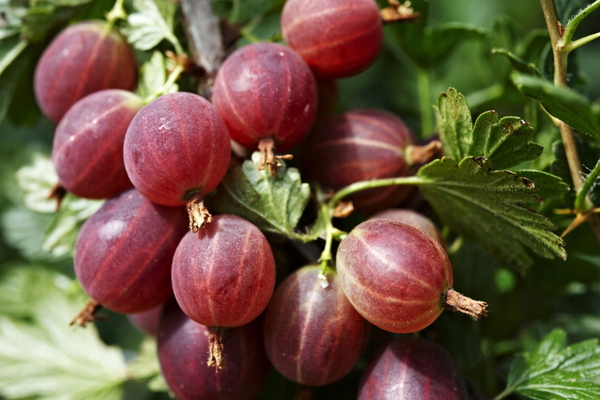 The advantage of the variety is the absence of thorns on the shoots. The berries are dark red, large or medium, covered with green veins and have a sweet and sour taste, as well as a fairly dense skin, which makes them easy to store and transport. 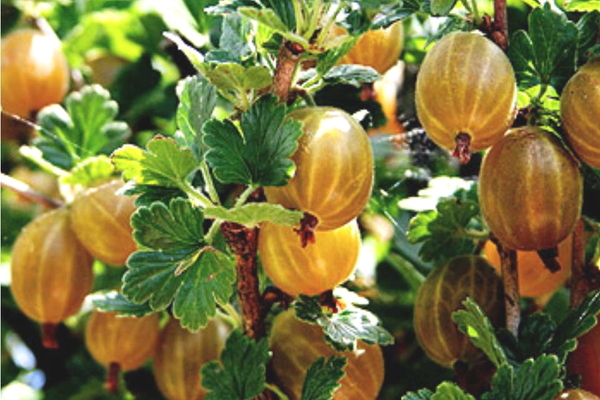 Tall bushes of the variety can grow quite widely and reach 180 cm in height. As the name suggests, the berries are yellow-orange with lighter veins. It tastes sour with honey notes. The harvest is quite early and plentiful, the duration of fruiting is long. Read more about this gooseberry variety here. 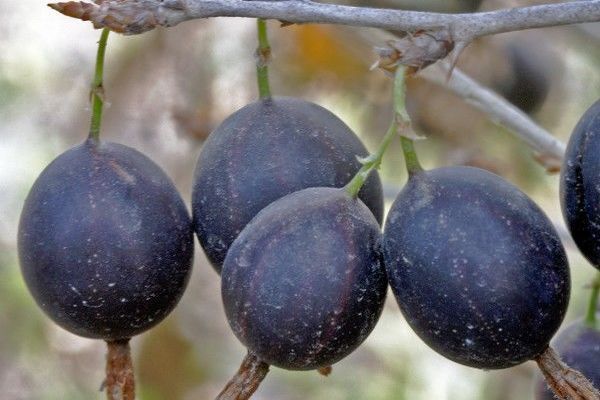 The berries have an original taste and also have an unusual color - almost black. The bushes of this variety are of medium height and medium degree of growth. More about the variety here. 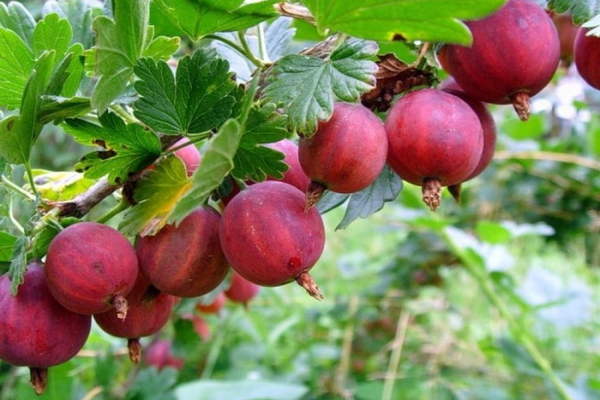 Very large berries - they can weigh up to 7 g, smell nice and are distinguished by the density of a bright red skin. The bushes grow up to one and a half meters, they do not branch very much. Another advantage of the variety is the small number of thorns on the branches, located singly and at large intervals. 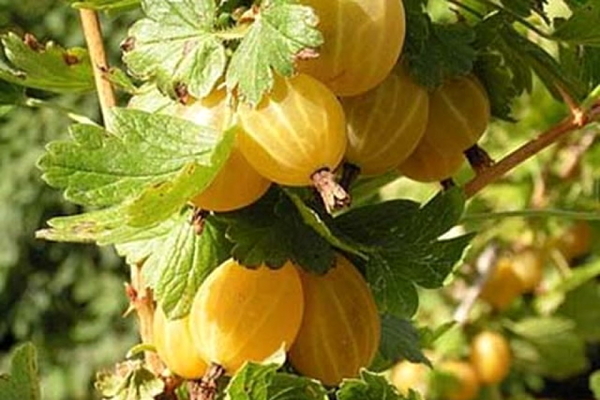 It belongs to the early maturing, grows up to one and a half meters. Not very large (up to 5 g) berries have a sweet taste. More about the variety here. 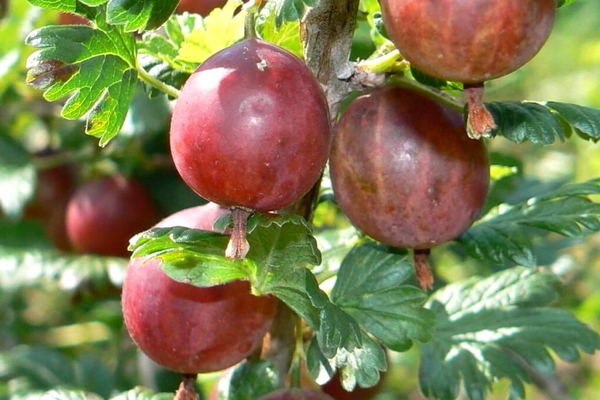 Late gooseberry variety, bears fruit with red sweet and sour berries weighing up to 5 g, grows up to one and a half meters. 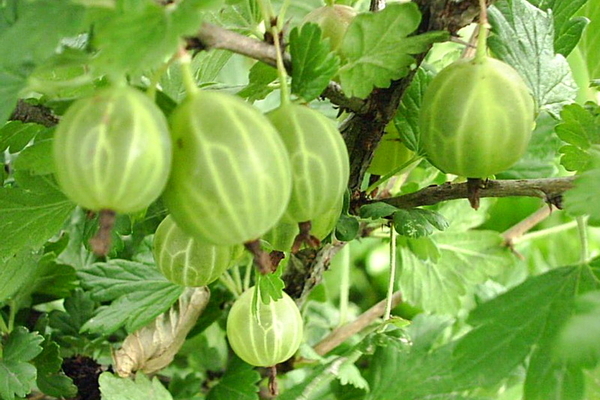 Forms strong and straight shoots, ideal for growing a stem. The bushes are tall, bear fruit in mid-July in greenish-amber berries weighing about 4 g.

How to form a standard gooseberry

The formation of the standard form begins from the moment the seedling is planted in the ground. For this purpose, you should choose a well-lit area of ​​the garden. In the first year, caring for the future standard gooseberry is not so difficult: it does not need pruning and requires watering, weeding and fertilization.

In the second year, the seedling continues to grow and develop, caring for it remains the same, but with one nuance. As a rule, at this time, several replacement shoots are formed - it is necessary to choose the strongest and located perpendicular to the surface of the earth. The rest must be removed.

After harvesting, the main plant should be removed from the soil and the selected shoot should be left, which will subsequently form a stem. A young plant must be regularly watered, fed, and when it reaches a height of 150 cm, tie it to a support on the eve of winter.

The next season, the standard gooseberry will bring a bountiful harvest of large berries. During the third season, the gooseberry continues to grow, until harvesting, no special procedures are required. Then it is necessary to prune all branches, shortening them to the first bud, and the green shoots must be removed. By the fall, the cut branches will grow back and develop.

At 4 years old, the plant has already formed a powerful root system, so you can remove all shoots at ground level immediately after harvesting. In the spring, you can leave a couple of replacement offspring.This procedure should be repeated annually.

In the case of working with an adult shrub, it can be formed on the basis of 1-3 stem shoots, ennobling it annually in spring. For this purpose, all dense branches are cut off at the base of the bush, leaving from 1 to 3 shoots, and all green shoots are removed. At the end of the harvest, all old branches should be cut off, and the soil around the plant should be loosened, fertilized and shed with water. This is quite easy to do, given the peculiarities of the form.

All the procedures described above will allow sunlight to better penetrate the crown, from which the berries will ripen faster, become larger and more juicy, and the risk of developing fungal infections will be reduced. Harvesting from such a shrub is also much easier than from a traditional shrub.

If a gooseberry seedling was purchased from a nursery, then it will have from 3 to 6 branches of the crown. The central branch should be slightly shortened, and the rest should be cut off so that the crown takes on a spherical shape. After 4 years, it will fully develop, it will be possible to remove the old branches, and leave the young shoots of the crown unchanged.

- for the stock, one-year-old or two-year-old bushes of golden currant with a powerful root system should be chosen;
- a gooseberry stalk of the selected variety is cut off and cleared of thorns;
- optimal time for grafting: early spring, method: improved copulation, height: junction of the trunk and crown;
- caring for grafted plants consists in watering, sheltering from the heat of the day and systematic cleansing of the stem from fresh shoots;
- in the fall, a transplant is carried out to a new place;
- when transplanting, it is necessary to provide the plant with reliable support; for this purpose, a peg is dug into the planting hole, in height exceeding the level of inoculation, on which the trunk is tied;
- the support must be maintained throughout the life of the standard gooseberry, since it protects the plant from deformation and damage under the weight of the crown or under the blows of the wind;
- in the future, the bole must be regularly cleaned of newly appeared shoots and branches;
- annually, during spring and autumn pruning, it is necessary to ennoble the crown, cutting off excess branches and directing the remaining ones in the right direction;
- Too dense crown must be periodically thinned, and too rare to thicken, shortening the shoots.

The rest of the standard gooseberry requires only the most common and familiar procedures for every gardener: timely watering, weeding, loosening the soil, and fertilizing. 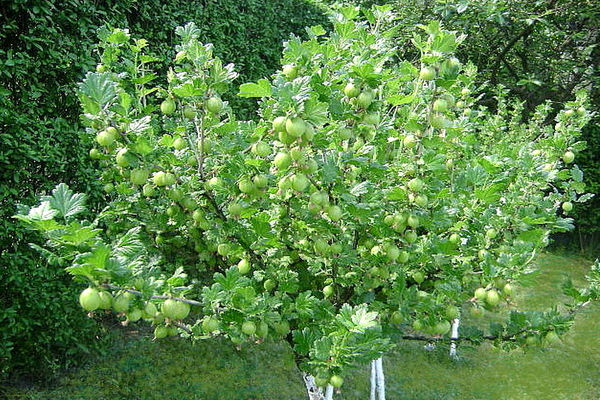 Obviously, following agrotechnical recommendations and following simple rules for caring for a plant will allow you to grow a beautiful berry tree on your site. Its graceful shape will serve as an excellent decoration for the garden, and a rich harvest of delicious berries will delight the owner of the site and his guests.

Allergy to honey: TOP treatment methods, symptoms of manifestation with a photo

Hot peppers at home: how to grow? TOP tips and the best varieties, photos