For a long time, it is believed that the mountain ash tree should bring happiness and joy to the house near which it is planted, and also protect it from fire. Until now, the branches and foliage of the culture are used as a disinfectant, which prevents spoilage of vegetables, and also purifies the water. Rowan fruits are widely used both in folk medicine, due to its beneficial properties, and in cooking. Today we will introduce you to rowan, which is distinguished by the color of its berries.
Rowan Burka and its main characteristics, description, advantages and disadvantages, how to plant it correctly, how to care for and propagate it. The issue of diseases and pests is also raised, and gardeners' reviews are presented.

Rowan Burka: description of the variety and characteristics 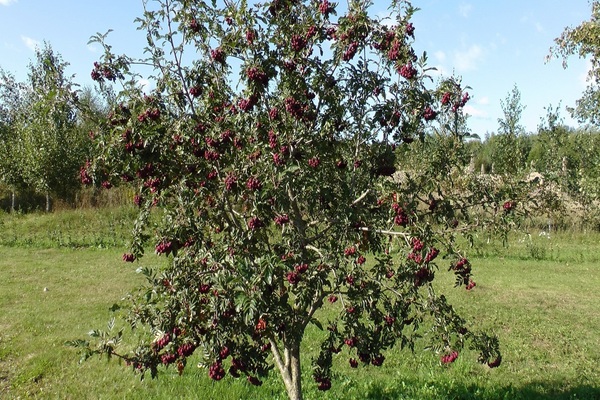 Rowan Burka is a low tree, the height of which does not exceed 2.5 meters, with a spherical, small crown. This variety is a two species hybrid, which was formed by crossing the following varieties:

Rowan inflorescences are white, five-membered, with small flowers, having a gorgeous aroma.

An unusual, incredible entourage to the tree brings an unusual color of its fruits - brown-red berries with a sour, astringent taste.

The flowering of the culture occurs from late spring to early June (May - June), and the fruiting period starts closer in autumn - August - September.

Any species is endowed with its pros and cons - this crop variety is no exception.

What are the advantages of the mountain ash "Burka":

Bourke's rowan has no drawbacks, except that gardeners can be frightened by the relatively slow growth of the plant.

I would like to note that due to the prevailing unusual taste of the fruits, they are not advised to be eaten raw. But chic compotes, juices are cooked from berries, added to tea, jam and various jams are made.

Rowan variety Burka prefers dry, drained soil, which is brought to a normal water balance. The plant is moisture-loving, but it is impossible to plant in swampy soil.

Rowan ordinary Burka, like most of its fellows, is a light-loving tree. When choosing a place for a culture, give preference to an unshaded area, otherwise the shoots will grow, leaving the lower part bare, the formation of ovaries will be small.

Preparation of a site for mountain ash

Based on the characteristics of the rowan variety, Burka is an absolutely undemanding plant. Grows remarkably in almost any soil, with particular preference for the following species

The main condition for good growth and development is that the soil should be loose, light, which will freely pass oxygen, water, and various nutrients to the root system of the tree.

As mentioned earlier, there should be a bright spot. The distance from Burka to neighboring trees should ideally be at least 4-5 meters.

Previously, a couple of weeks before planting the plant, a hole is dug, the depth of which is no more than 50 centimeters. The width of the hole depends on the roots of the planting material.

After that, the soil is prepared:

Rowan planting material must be healthy, strong, and not damaged. The root of the seedling should be about 20 cm long, with elastic and even bark.

Planting material is planted, as a rule, either in the autumn season (this is done a month before the onset of cold weather) or in the spring (this is done in March, when it has completely thawed and before the juice begins to move). 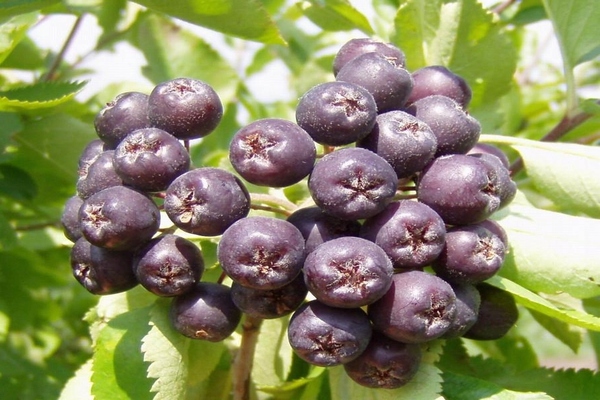 After planting a tree, caring for it is absolutely simple, which will allow the mountain ash to grow and develop faster.

How to water rowan

First, the plant is watered immediately after it is planted. Further, it is necessary to water the mountain ash "Burka" at the very beginning of the growing season. Also, if hot, dry weather is established outside, humidification must be carried out. Also, be sure to water the plant 1.5-2 weeks before and after picking berries.

One tree will need 3 buckets of water, you need to water not at the root, but near the trunk ring.

The process of pruning the Burka rowan tree begins when the plant is 2 years old. This procedure has three important functions:

The tree is pruned, in the spring, until the buds swell. You cannot often and strongly cut the tree - this will negatively affect its health, growth and development - the bark is bare, the shoots go into rapid growth, which negatively affects the taste and quality characteristics of the berries.

When pruning mountain ash, be sure to cut thin shoots, as they form branches that uselessly make the crown of the tree thick and dishonorable because of them.

There is no need to make a large amount of top dressing, as this will provoke the development of greenery, to the detriment of the harvest.

As noted earlier, mountain ash is a frost-resistant tree, therefore, it does not need any shelter and preparation for the winter season. She calmly tolerates air temperatures down to -39 degrees.

The Burka variety is pollinated independently. For cross-pollination, it is recommended to plant several trees of different varieties at once. If you notice that the tree is not pollinated, it is necessary to graft the mountain ash with cuttings of other crops.

In each region, the speed with which the berries ripen is different. You can start picking berries already in August - September, when the fruits turn brown-purple, the flesh will be dense and slightly harsh.

After September, the berries become sweet, and the mountain ash continues to bear fruit throughout the autumn period until winter.

Possible diseases and pests, how to deal with them

The main pest for the fruits of mountain ash "Burka" is birds. If the tree is not “guarded”, the birds can leave you completely without a crop.

If the tree is strong and healthy, it has good immunity and it is not afraid of sores and insects.

If the mountain ash is weak, then it is dangerous for it:

With all the numbered and other harmful insects, specialized preparations will help to cope, using them strictly according to the instructions.

The most difficult thing is to get rid of necrosis and some types of mosaics. Disease prevention can be ensured if the tree is planted in accordance with all the requirements and rules, to fight insects, and also to fully care for the crop.

For the common mountain ash Burka, belonging to the species mountain ash, the best breeding method is seed.

Propagating a plant by this method, you must adhere to the following steps:

For rowan trees of valuable varieties, vegetative methods are used:

Rowan ordinary Burka is just a godsend for any gardener. This plant will decorate any site, it is absolutely unpretentious to the conditions and care for it. A series of simple manipulations in the form of watering, peeling and cutting - and the mountain ash will generously reward you with the harvest. Rowan berries are very tasty, and most importantly healthy.

Most of all I was surprised by the color of the berries, which is not orange, as I'm used to - but they have a brown hue. I bought a seedling in the nursery and I still can't get enough of it. Rowan variety Burka took root immediately, no problems arose. I do not carry out any special care. Every year there are a lot of berries, they taste tart. I make jam from them, the children and my husband are delighted.

A rowan seedling Burka was given to me by a neighbor on the site. I have three rowan trees and this variety has become an ideal addition to them. No hassle or worries. I regularly carry out prevention of diseases and from insect pests - I have not encountered ailments. Every year there is a generous harvest, I cook medicinal infusions from it, and sometimes compotes and jam. It seems to me that with the use of Bourke's rowan berries, my health has become much better. 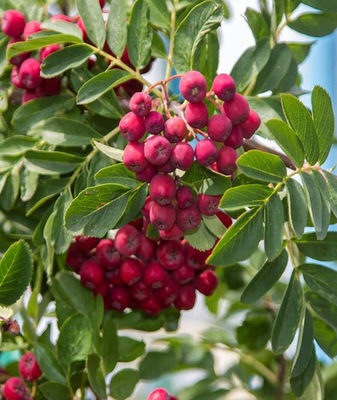 Rowan Ruby
Rowan Rubinovaya was bred by Michurin and is a hybrid of pear and mountain ash. It happened,... 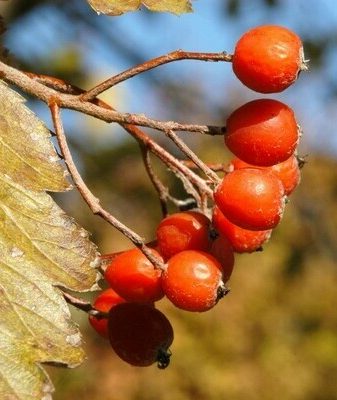 Rowan intermediate
Rowan Intermediate sorbus intermedia, and you can also find such names as Swedish or ... 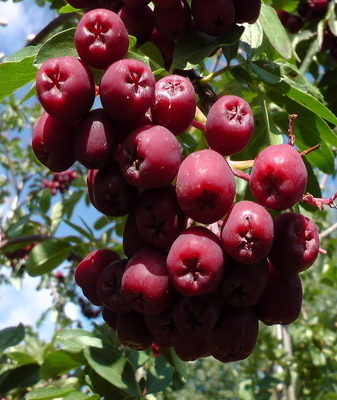