The article describes the winter harvesting of "carrot" tomatoes: how to prepare tomatoes with carrot tops without sterilization: a recipe, advice on choosing ingredients, storage.

The fastest and best way to marinate tomatoes is with ordinary carrot tops, it tells how to preserve vitamins and useful properties of the product, as well as what to do if the tomato ferments or becomes cloudy.
In our time, a family that does not procure conservation for the winter is probably a great rarity. After all, many people love to feast on in winter, for example, salted tomatoes from a can. And almost every housewife in the kitchen has her own special recipe for their preparation. A very interesting recipe is canning with carrot tops. This recipe is not complicated, and besides, it is very tasty!

1.Tomatoes with carrot tops: a recipe. Taste and how to prepare 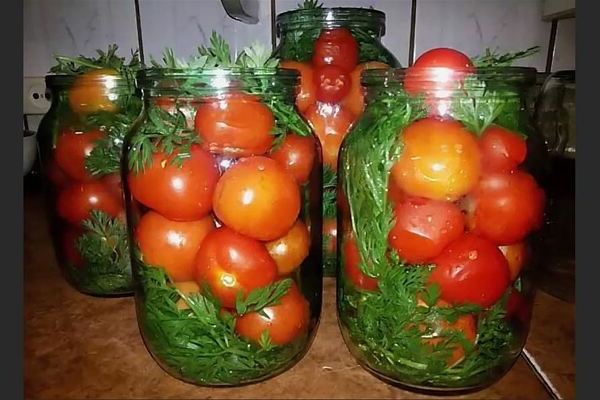 Tomatoes with carrot tops: a recipe

Carrot tops endows tomatoes with a special taste, makes them a pleasant marinade, even some kind of unusual one, and also gives some decorative effect to conservation. Tomatoes turn out to be very tasty and sweet, and some housewives let the marinade in so that it can be used to bake bread or gingerbread. It is important to note that no special spices are needed; carrot tops take on this role. 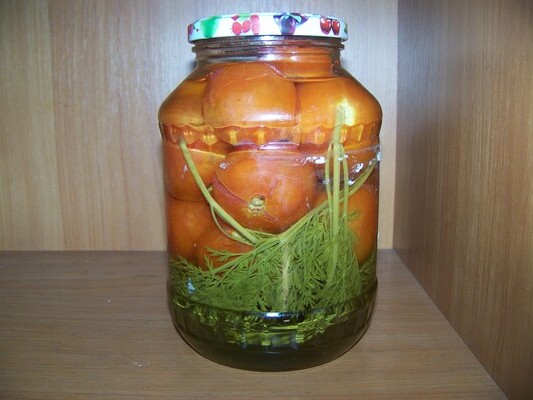 Tomatoes with carrot tops: a recipe

All housewives usually take small or medium-sized tomatoes for preservation, because they absorb the marinade well and turn out to be more juicy and tasty. But it is better to take the tops from large and large carrots, since they have already gained strength, and this greatly affects the taste of tomatoes and marinade, respectively.

3.Carrot tomatoes for the winter: photo, recipe step by step 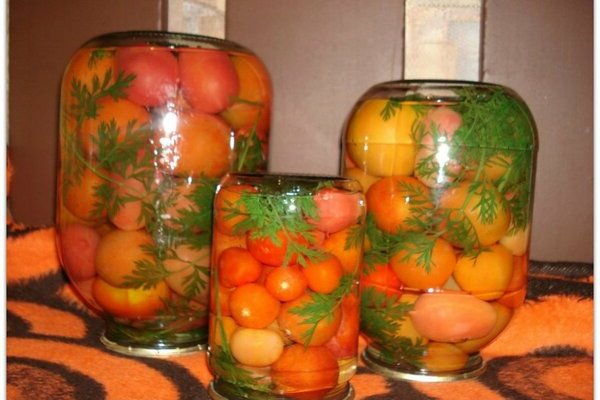 Carrot tomatoes for the winter

We turn to cooking, for this we need to figure out how much and what exactly is needed, as well as in what sequence to cook.

- Ingredients:
A two liter jar is taken: about thirty not large tomatoes, bunches of carrot tops, four tablespoons of sugar, one tablespoon of salt, vinegar, preferably 6% -70ml., If you have 9%, then 50-60ml., As well as boiling water so that pour it all over.

- tools and inventory:
No tricky accessories needed, all you need is a glass jar and an iron lid.

Pickling tomatoes will not be difficult. To do this, put two to four sprigs of carrot tops at the bottom of the dish. Top ten tomatoes, then tops, then tomatoes again. And so on until the end, ending with carrot tops.

After that, pre-boiled water must be poured into the jar to the end. Cover with a lid and let stand for 15-20 minutes.

When the water cools down, you need to drain it into another separate container and add a little boiling water there. It is best to pour water into a container with a measuring ruler, because in the end you should get two liters of water. All this must be poured into a container and put on fire, then we add salt and sugar there until it is completely dissolved.

As soon as everything starts to boil, pour in the vinegar and mix. Pour the marinade that we got into the jar up to the neck, close the lid tightly and turn it upside down. You can cover it with a towel and let it stand to cool slightly.

It is best to store such ready-made preservation in the cellar.But storage in an apartment is also allowed, for example, in a storage room. The most important requirement for storage conditions is coolness, as well as that this place is dark without daylight. Before eating tomatoes, it is recommended to let them stand for a month. But three are the best, they will soak better during this time and will have a full-fledged special taste. Observing all these conditions, conservation can be stored for a year or two.

5.What is the best way to eat tomatoes?

In most dishes, tomatoes can be served with anything you like. For example, with a side dish, with meat, for potatoes, as well as for strong alcoholic drinks. It all depends, of course, on your taste. But one thing should be noted that the table cannot be spoiled with these pickled tomatoes.

6. What to do if a tomato ferments or becomes cloudy.

If you suddenly find that the tomato has become cloudy or fermented, you urgently need to put it out of the container and wash it in saline solution (20-30 grams per liter of water). Then put the already washed tomatoes back in a sterilized jar. The cloudy solution must be filtered through cheesecloth, boiled, and then poured back into the tomatoes. If for some reason it is not enough, then make a new marinade. In today's article, you learned a new recipe for pickling tomatoes, and we can safely say that it is quite easy and simple. The most important thing is to stick to the recipe and then you will succeed. And you will enjoy this sweet taste in winter, the moment you open the first can.