Peruvian lily: a short about the origin 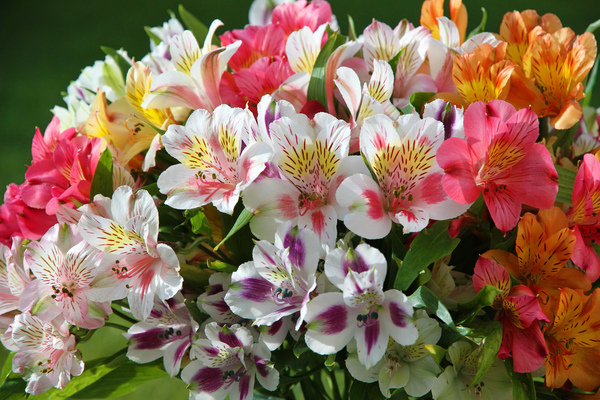 Peruvian lily: photo of the variety

At the moment, there are a huge number of plants that live for one year or several years. It is very difficult to choose the plant you like the first time around, especially when you just started gardening. Of course, everyone wants a plant with stunning appearance, with simple and straightforward care, without wasting a lot of time and money. This flower falls under all these criteria, which is considered unpretentious both in terms of growth and in terms of caring for it.

Peruvian lily alstroemeria originated on the territory of the South American state. It grows wild in Peru and Chile. At this time period, this plant grows on the territory of its native country only near roads, like weeds. You can compare this plant with our dandelions, which are of interest only to children. If you rewind time to the time of the existence of ancient civilizations, for example, during the existence of the Incas, one would notice that this flower is presented as a gift from the sun god Inti.

When the people of Spain explored the lands of America, the flower was transported to the Spanish lands, and it began to grow there, but did not arouse much attention and did not enjoy popularity. This continued until the scientist from Sweden Klas Alstremer in one thousand seven hundred and sixtieth year decided to go on a journey across the seas and oceans to explore the territories of Europe. His path passed through the lands of Spain. Klas Alstremer was fond of exact sciences, botany, chemistry and zoology.

He spent an enormous amount of time researching various herbaceous crops, asking to be allowed to look at his private greenhouses, gardens and collections. Studying the territory of Europe, he did not stop watching the world around him. In the lands of Spain, Claes saw this stunning flower, which he had not seen before. It is worth mentioning that Claes was one of the best students of Karl Linnaeus and his good friend, so it is not surprising that he sent the plant to Karl. 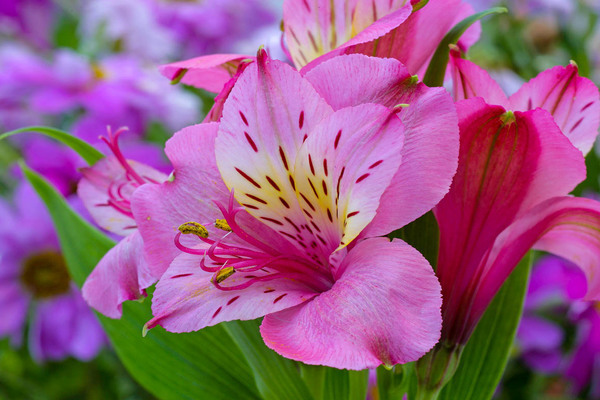 In one thousand seven hundred and sixty-two, Karl Linnaeus finished work with the plants sent to him and created a new family for them, which was named after their discoverer, namely Alstroemer. The family began to be called Alstroemeria, the species was named Alstroemeria, it includes about fifty species. This plant gained immense popularity in Europe, later it was in almost all greenhouses, gardens and flower beds. Next, we will analyze why the plant won the hearts of gardeners.

Description of the variety of violets Peruvian lily 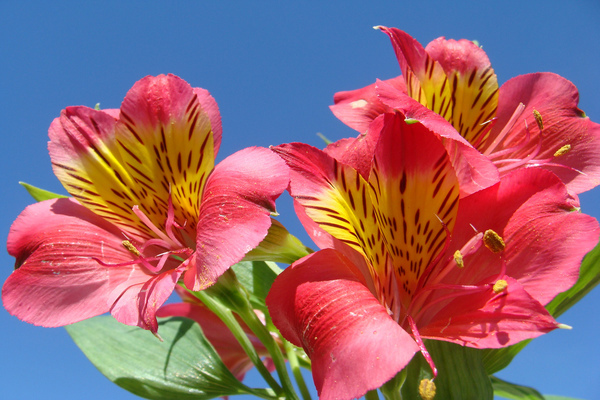 Before characterizing this plant, it should be said that the flower is also known under a different name - alstroemeria. In the common people, there are other plant names:

All plants included in this family are considered crops that live for several years in herbal crops. The root system is very powerful. Stems are upright, grow rapidly. The foliage of this plant is unusual compared to other varieties of herbaceous crops. They have the property of resupation. This means that the plant can turn around its axis.

It turns out that the plant twists its foliage so that its top changes in place with the bottom of the leaf. The shape of the flowers of the "Peruvian lily" resembles a cross between a lily and an orchid. This has spread false information that sellers tell plant buyers. Some people mistakenly think that this plant is a breeding species from the parent plants - lilies and orchids. It is not true! This plant, like the lily, has an inflorescence of six pointed petals. The color palette is varied.

Usually these are yellow, pink, red colors. Most often, the petals of the same shade have a variety of patterns, for example, stripes and lines. The flowering process occurs at the end of the spring season or at the beginning of the summer season. Insects take up pollination of plants or winds do it. In their native lands, the pollination of this plant is arranged by small representatives of birds - hummingbirds. On the flower, a fruit is formed with a box with planting material, namely seeds, small in size and round in shape. It is surprising that the fruit explodes on its own, and its planting material, namely the seeds, fly away several meters from the plant.

In the wild, this plant grows in favorable conditions for it, namely, in a warm temperature. However, there are varieties that grow above water, for example, over the sea. For all the time that it is grown in Europe, a huge variety of varieties have been obtained, which are grown in personal greenhouses, gardens and collections. 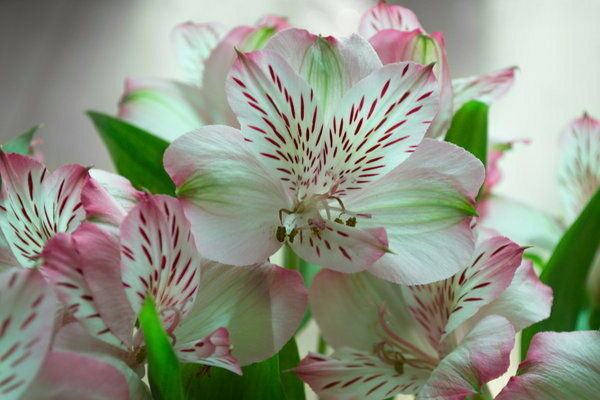 This plant gained fame due to its flowers and tall stems, which makes it possible to use this flower for making bouquets. However, bouquets with such flowers are not very popular due to the fact that the petals fall off very quickly. The root system is used by the common people in medicine for the manufacture of starch, and it, in turn, is used to prepare healthy food.

Unfortunately, the plant has a low level of frost resistance, however, it can be grown in open soil, you need to purchase a vegetable garden and a garden in a store or make your own protection for the winter season from cold and frost. The plant is a lover of light, so carefully choose a place for further growth, it should be with enough sunlight. It is advisable to plant flowers on the south side of a summer cottage or suburban area.

In the summer season, it is necessary to purchase a garden and a vegetable garden in a store with a theme or to make your own protection from direct sunlight, which burns the foliage. When choosing a soil, it is worth giving preference to soil with an average level of acid, fertile, drained, loamy.

The plant does not tolerate both drought and stagnant water. Try to find a balance in soil moisture. However, there are varieties that prefer a higher level of moisture in the ground. This plant can be propagated using planting material, namely seeds, as well as by dividing the shrub. Harden the planting material before sowing. Transfer them to peat in the last week of the second winter month, mix with the soil on the site and maintain the temperature at six degrees for fifty days.

Then raise the temperature to twenty degrees. Moisten the ground slightly with warm and settled water, cover the seeds with a thick film or glass and wait for the seeds to hatch. Water the seedlings in a timely manner and let in fresh air. Before planting seedlings in open soil, place them outside for a day.

In the last week of the last spring month, preferably in cloudy weather, plant the seedlings in the pre-prepared planting holes.The space between the planting holes should be about thirty centimeters, place manure on the bottom, then the seedling and tamp the earth. Moisten the soil and make a layer of mulch.

In the spring or fall season, you can start dividing the shrub. You should have about three pieces. 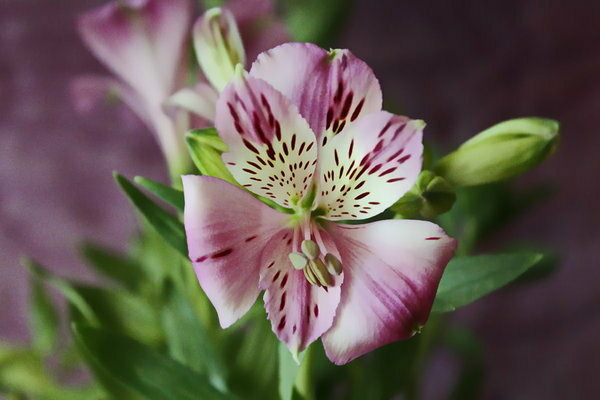 The most important thing is not to let the plant die in the winter season. Most species are dormant down to minus twenty degrees. Autumn care includes:

Colombo potatoes: reviews, who planted, the secrets of planting varieties with photos 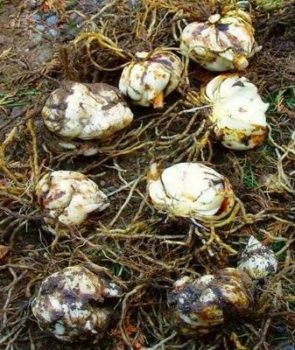 When to dig lily bulbs
Do I need to dig up the lily bulbs? Lily bulbs: photo Lily has been growing for several years, its ... 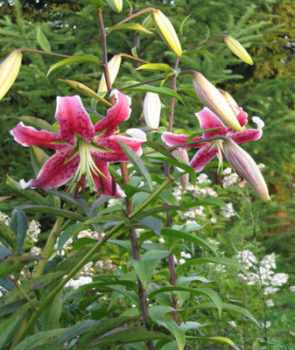 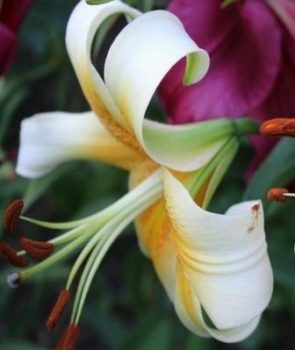