Cherry is a fruit tree that does not require special attention and care. The culture feels comfortable in a variety of soils and can be grown in regions with different weather conditions. An important point when growing cherries is the formation of their crown, since regular pruning of cherries is a guarantee that the tree will bear fruit better and it will be more convenient to harvest the crop. Usually, the crown of a tree is formed in autumn or spring, but summer sanitary pruning is also acceptable.

This article provides information on how best to prune branches based on the seasonal characteristics of the climate.

Cherry pruning - why do you need it? 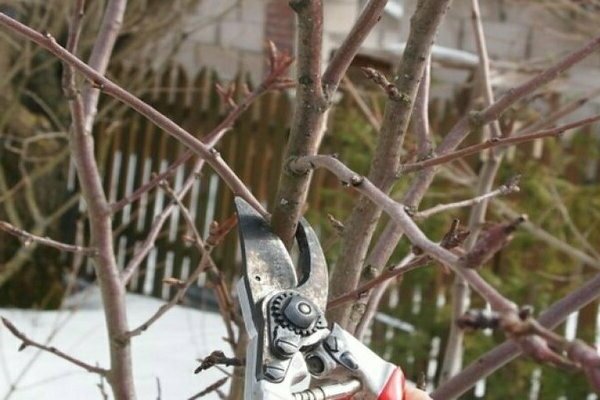 The crown is formed not only for decorative purposes, but also so that the tree bears fruit as long as possible. There are varieties that are classified as early ripening. This fact is an undeniable advantage. However, there is a risk that in a decade and a half, such a tree will cease to bear fruit altogether.

To avoid this, you can properly shape the crown of the cherry, creating the necessary conditions for a longer yield.

Dry, diseased, old and damaged branches should be removed as soon as you notice them. Further, those branches are removed that contribute to the thickening of the crown and interfere with the free passage of the sun's rays.

Similar to other garden trees, the crown is formed according to several patterns. So, you can thin out the branches, or you can make them shorter. 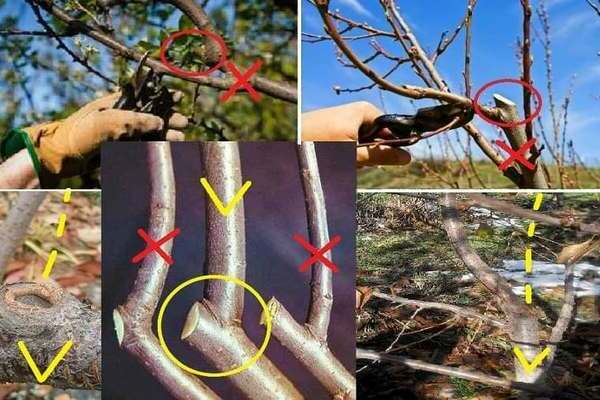 In order for the tree to branch thicker, and the skeletal branches to be strong and healthy, only a part of the upper branches, as well as lateral branches, are cut off. This will be the cropping pattern.

If we want sunlight to reach each berry, and the foliage is better ventilated, then the crown should be thinned, which means that some extra branches should be completely removed.

This procedure is recommended to be carried out in early spring, until the sap flow in the stems has begun. Or practically before frost, when the tree is preparing for a dormant period.

There are a number of rules when carrying out the procedure for forming a crown.

The formation of the crown is also allowed in winter. However, this applies only to those regions where winters are warm, at least 8 degrees below zero. If you decide to prune in the summer, then it will only benefit those trees that have been growing on the site for more than three years. This procedure will negatively affect new seedlings.

In order to carry out high-quality pruning of branches, you will need tools such as a pruner and a hacksaw. With the help of a pruner, thin branches are removed, and thick trunks are cut down with a hacksaw.

Before proceeding with processing, it is necessary to sharpen all instruments and treat them with an antiseptic. This is done so that no holds remain on the cut. And also bacteria from diseased plants did not get into the treated tree. The same is done after the end of the formation of the crown.

When to prune cherries

Cherry is an unpretentious plant, therefore it will withstand pruning at any time of the year. But experienced gardeners still recommend carrying out the procedure in the dormant stage of the tree, namely in spring or autumn.

As mentioned above, only adult crops can be pruned in the summer. Especially if you notice dry or diseased branches. This procedure will negatively affect new seedlings. Namely, it will stop the growth and development of the plant and delay the fruiting period.

In winter, pruning is permissible only in the southern regions, since the cut off part of the tree will not tolerate severe cold and bad weather. Better to wait until early spring. 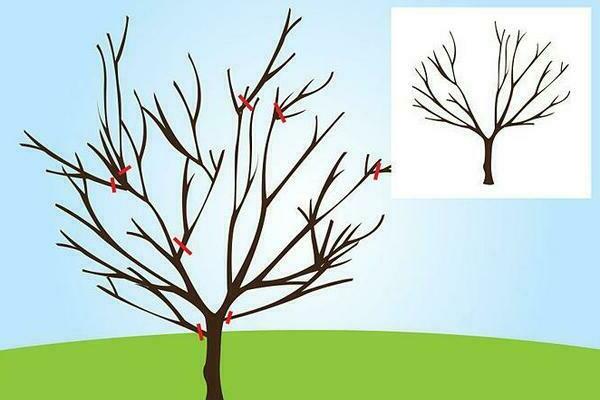 The most important is spring pruning, since the harvest of the current season depends on its quality. In addition, with regular pruning in the spring, it can already be avoided in other seasons, especially in autumn, when there is already enough gardening.

The optimal month for pruning is April, because at this time the buds have not yet begun to bloom, and the plant will tolerate formation better. And at the same time, those branches that are frozen in winter will become more visible.

In addition to the usual cherry, there is also felt cherry... In this case, you need to shape the crown more carefully and painstakingly. Here, already in the very first year of cultivation, it is necessary to cut the main trunk by half a meter, and the next year, one fourth of all side branches are sawn off.

This is because this type of cherry tends to grow strongly and make the crown thickened, which is bad for the fruiting of the crop. According to the rules, it is necessary not to cut down thick and strong branches here, annually only shortening them by 10 cm. The rest of the branches are removed completely.

Crown formation in the autumn 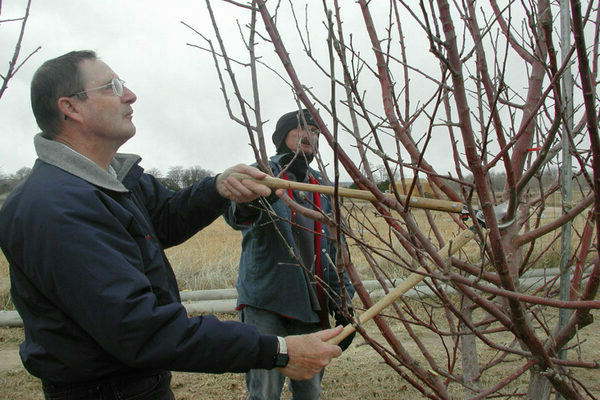 If pruning in the spring promotes the rapid awakening of the plant and the active growth of all parts of the tree, then in the fall the tree is formed to prepare it for winter dormancy.

All stone fruit trees, including cherries, respond positively to autumn pruning. If you regularly carry out the procedure, then the tree will reward you with high-quality fruiting for many years to come.

Autumn pruning begins in all regions at different times. It will be influenced by what winter is in the region, and when the first frosts come. So, in the southern regions, pruning can be carried out in November. But in the northern strips, the deadline for pruning is September.

In addition, young plants should not be touched before winter, because they can freeze in cold winters, being weakened.

First of all, cut off all unnecessary shoots that do not form the basis of the skeleton of the tree. Also saw off those branches that grow from the main branches at an acute angle. It is necessary to leave only skeletal branches and thin, small shoots.

All sections of the saw cut must be lubricated with garden pitch so that the wounds heal faster.It is also necessary to choose the exact time so that the tree is at rest, but the night temperatures are not sharply negative. If you do not have time, then the branch can freeze, and after it the whole tree.

Although not often, crown formation is also carried out in winter. First of all, this is beneficial in that the absence of sap flow in the trunk and other branches will make it more comfortable for the plant to endure the procedure, and branches hardened from the cold can be easily cut off with a hacksaw.

But here it is important to carry out pruning in the absence of severe frosts and winds. Since the cut sites do not heal well in such conditions. And of course they should be treated with a garden varnish.

In the summer, only those branches are pruned that are affected by any disease, broken or withered. It is not worth forming a crown during this period, since the tree is active, it is gaining color and bears fruit. He needs strength for more important processes than for wound healing. 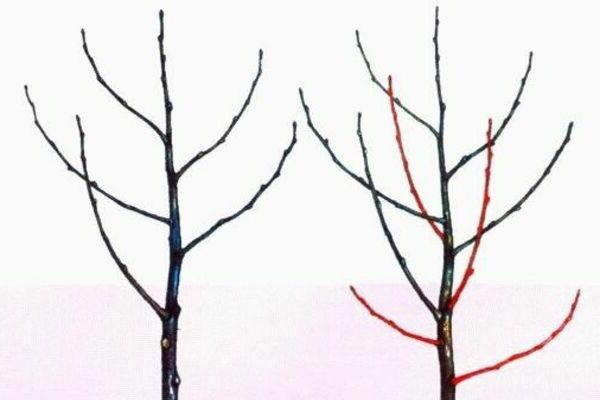 So, it has already been noticed that it is best to form the cherry crown mainly in the spring, in April.

Here you can form a crown like a tree, then it will be called a tree. Or as a bush-like crown. On young trees at the beginning of formation, the actions will be the same.

The main thing is to saw off part of the central branch by about half a meter. Further, as the side branches grow during the tree-like crown formation, it is necessary to leave about 8 main branches. And with a bushy crown formation, this figure will reach 15 lateral branches.

Further, the lateral skeletal branches of the crown should be left at about the same length. The main thing is that they are about 20 cm below the top of the tree.

In general, for any crown formation scheme, the growth of branches should be controlled so that they are approximately the same length. This will not only give an attractive appearance to the tree, but also contribute to better fruiting of cherries.

Rose Fairey: all information about the species and plant care