The article comprehensively covers the treatment of late blight with chemical and folk remedies. Recently, more and more tomatoes and potato bushes with black spots, which are clearly visible on the fruits and leaves, have appeared on your site. Start sounding the alarm your site is struck by late blight, a very unpleasant and resistant to treatment fungus. But you should not give up, you need to urgently start acting and treats infected plants. In this article, I will share with you recipes and rules that will help you permanently rid your area of ​​late blight. Late blight is perhaps the most common and insidious disease that is fungal in nature. This fungus is mainly affected by the nightshade family. The most favorable conditions for the development of the fungus, cool and rainy weather. Phytophthora fungus spores can survive the winter in soil or on plant seeds, and the fungus also feels great on the remains of plant debris. Garden tools should be well disinfected, as the spore of the fungus can remain on it and, during use, get on plants or into the soil. In order to prevent late blight from spreading throughout the garden area, you need to follow measures and take preventive actions in time. 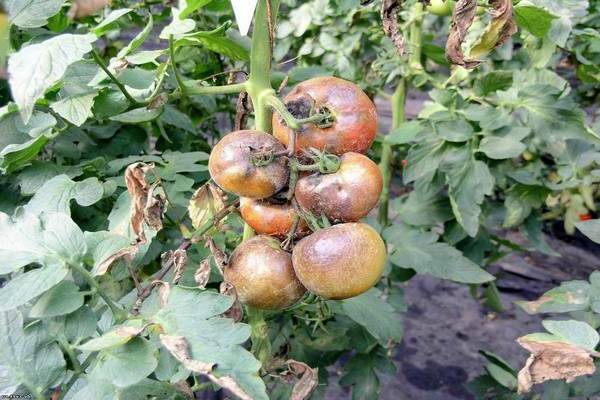 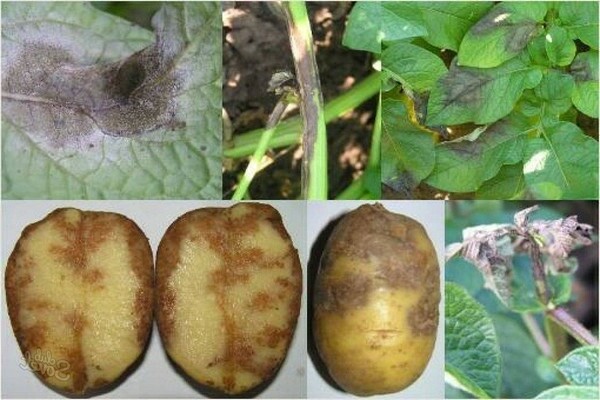 1) The most favorable soil for the appearance of late blight, the soil which is very heavily calcified, it is best to supplement such soil with fertilizers or special additives for the soil. In order to restore the balance of lime in the soil, I often use river sand or peat. After the additives are added to the soil, it should be watered with a solution of complex fertilizers.
2) As you know, too humid environment can provoke late blight. For this reason, you need to very carefully follow the rules and watering technique. The beds should be watered very carefully, do not allow stagnation of water in the soil. You should also carry out regular weeding and maintain a distance when planting certain plants. Since the bed on which there is a very dense planting is more susceptible to infection by fungi than beds with sparse vegetation. Tomatoes and potatoes should be watered only in the morning, this is done so that in the midday heat, excess moisture can evaporate and the soil has time to dry out a little. If you are growing tomatoes in a greenhouse or greenhouse, then regular ventilation should be carried out. High humidity can occur due to extreme temperature fluctuations. This usually happens in August or early September, when the day is still quite hot, but the nights are already pretty cool. If your plants grow in open ground, try to cover them if possible, this measure is necessary so that the plants do not freeze in the first place. But it is also an excellent measure for the prevention of late blight.
3) If the plants in your area are weak and stunted, then his immunity will not be able to resist not only phytophthora, but also many other diseases. In order for the plants to be strong and strong, you just need to carefully monitor the feeding regime. If the plant is well fertilized and healthy, then the risk of infection with a fungus is practically reduced to zero. I also strongly recommend not to neglect the rules of crop rotation.The best precursors for potatoes are all plants from the pumpkin family, legumes and cabbage. For tomatoes - cabbage, onions, zucchini and cucumber.
4) In order to prevent the development of fungus in your area, you can resort to planting plants that are very resistant to fungal diseases and infections. Seeds should be selected very carefully. If the planting material is of high quality, then no processing is required from you before planting. 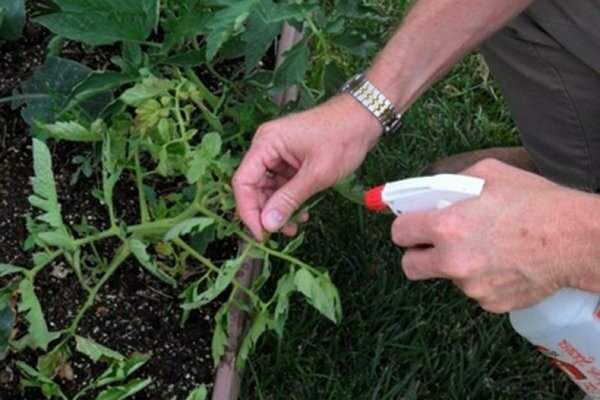 All gardeners are well aware that the means to combat late blight, which contain chemistry, are very effective. But they can only be used when plants start flowering, otherwise the harm to human health will be colossal. Therefore, in the middle of summer, during the period of violent flowering, I use only biological preparations that do not harm. The most commonly bought and used remedy is Fitosporin. The method of using this drug is quite simple, just dilute it with water as required by the instructions. The first treatment should be carried out as soon as the plants form the first ovary. After processing, it must be repeated every two weeks, this measure will allow you to forget about the fungus for the entire season. Fitoftorin is also suitable for treating soil against late blight. Before the start of the season, we treat the soil with a solution of the drug. It is extremely simple to water the soil abundantly with Phytophtorin diluted in water. During the growing season of plants, the soil should also be treated, according to a well-known scheme for plants, these treatments will not damage a drop.

What folk remedy for late blight to choose 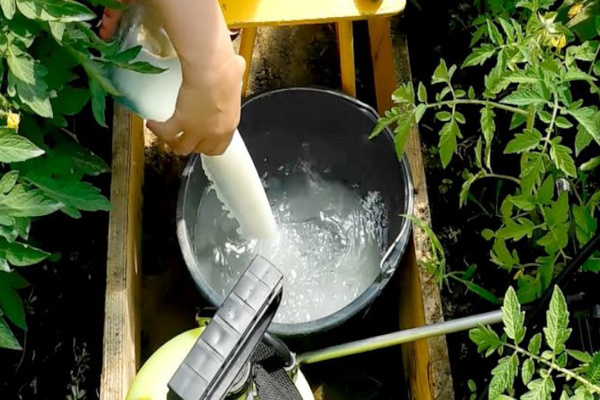 What folk remedy for late blight to choose

And now I will share with you the most effective and simple methods that our grandparents used. Folk remedies can be used without fear, since they are not capable of harming either the plant or human health.

Garlic tincture with manganese. In order to prepare this infusion, you will need 100 gr. garlic, you can use both finely chopped teeth and arrows, the effect will be the same. Chop the garlic and fill it with a glass of water, keep it all for at least a day in a warm, dark place. As soon as the garlic is infused, filter the infusion well, pour it into a bucket with a volume of 10 liters, add 2 g. manganese. We mix everything after diluting the infusion with nine liters of water. Each plant should be sprayed generously with this solution. The approximate consumption of the drug is half a liter for each bush. Treatments should be carried out more than once, every two weeks.

Trichapol. This medicine can be found in every first-aid kit, if not, then you can freely buy it at the pharmacy. One tablet of the drug must be crushed and dissolved in one liter of water. We process the plants every two weeks. We use the diluted trichopolum immediately, since during storage it loses all its properties.

Milk whey is perhaps the cheapest and most effective treatment for late blight. Dilute milk whey with water in a ratio of one to one. We spray the plants with this mixture for three days.

Wood ash. After the seedlings are planted in the ground and have been ill (about 5 - 7 days after planting). Start sprinkling the beds with wood ash, while trying not to get on the leaves of the plants. You will need to repeat this procedure when the plants begin to form a fruit ovary. Processing is carried out both in the open field and in greenhouses and greenhouses.

Milk and iodine are also excellent remedies in the fight against late blight. Pour ten liters of water and one liter of milk into a bucket, the milk must be skimmed. We drop no more than 15 drops of iodine into this solution, mix everything well. We spray the plants with this infusion every 2 weeks of the plant.This method not only destroys fungal and infectious diseases, but also significantly accelerates the growth and development of plants.

Yeast. I take one hundred grams of yeast and dissolve it in ten liters of water. I spray the plants with this composition. This preventive measure is very good and effective only at the first signs of the appearance of a fungal disease.

Kefir is also an excellent helper in the occurrence of late blight. We take one liter of kefir, its fat content does not really matter, we leave it warm for two days so that it ferments. We dilute the resulting substance in ten liters of water. With the solution we received, we need to spray the plants for two weeks after planting, if the weather is very rainy, treatment should be carried out every week.

Horsetail. In one liter of running water, we need to boil 150 grams of horsetail, dry or fresh does not matter. This broth should be boiled for about half an hour over low heat. Then we filter the broth and dilute it in five liters of water, only the cooled broth should be diluted. We process the beds with this infusion every two weeks.

Salt is the cheapest, but no less effective means of combating late blight. Dissolve one glass of salt in ten liters of water, spray the tops of the plants with this solution. But we must not forget that this measure is more of a prevention than a treatment of infected plants. Before processing, the areas of plants affected by the fungus should be carefully removed.

Infusion of rotten hay. I steam one kilogram of hay in 10 liters. water, add a little urea to the infusion. I leave everything in a cool dark place, infuse for 4 days. After the infusion, I filter it well and process the plants about once every two weeks.

Woody tinder fungus. Infusion from this mushroom is perhaps the least used, but in vain. The narrowed mushroom is crushed, and then poured with boiling water in a ratio of one to ten, tightly closed with a lid. Leave for a couple of hours, so that the infusion would cool and infuse. After the infusion has cooled, it should be filtered and the treatment of the site can be started. The plants should be sprayed with this mixture every ten days. This method of processing is perfect at a time when plants begin to set their first fruits.

Phytophthora on tomatoes, potatoes: how to spray correctly 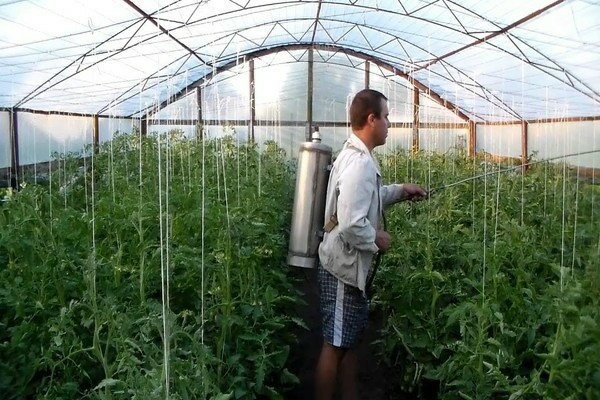 Phytophthora on tomatoes, potatoes: how to spray correctly

For effective and continuous protection of potato and tomato beds from an outbreak of infection, means of combating late blight should be started to be used long before the very first signs of the disease appear. I think it's no secret for summer residents that the best defense is an attack. For this reason, prevention should be started well in advance. I plunge the potatoes into the first treatment, as soon as the buds begin to form, the second treatment follows the first after two weeks. Tomatoes are processed in the same way as potatoes. In one season, the plants are sprayed 5 - 6 times with a difference of two weeks.
Dear gardeners, carefully monitor and take care of your beds. Prevent the spread of the fungus, treat and treat tomatoes and potatoes in a timely manner. And then your harvest will remain safe and sound, most importantly tasty. And no late blight will interfere with the achievement of your goal.

Variety "miracle cherry" Duke - why is it so remarkable?