Juniper is a coniferous plant that grows very densely in the wild in the forests of the United States, in the Siberian regions, as well as in western and northern Europe. This plant is classified as evergreen, for which it is very actively in demand among connoisseurs of landscape design. This article will focus on the Arnold juniper variety. This pillar-shaped crop is often planted in parks, public gardens and private backyards. 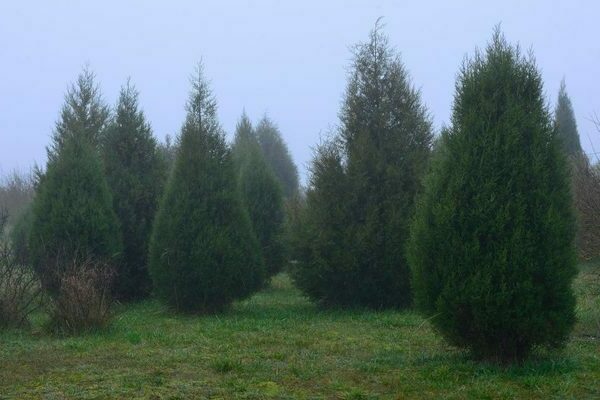 The variety has the official name Arnold common juniper - this is a tree that has a weak growth rate and belongs to the cypress family. The shape of the crown is similar to a column, since the branches are located close to the trunk and are directed vertically. On the branches there are needles that have a different color from light green to green-blue. The needles of the Arnold juniper variety have a length of up to one and a half centimeters. A few years after planting, the juniper tree is decorated with cones that are dark blue in color. If you try these bumps on a tooth, they will have a sweet taste. Each cone ripens up to 3 seeds.
The Arnold common juniper variety is classified as a dwarf species, since the trunk of an adult plant does not exceed a maximum of 5 meters. Each year, the seedling grows only 10 centimeters. If you count, then an adult ten-year-old plant will be about 2 meters high and half a meter in diameter. 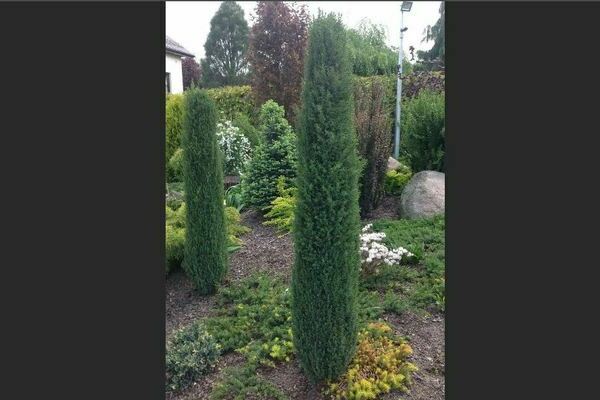 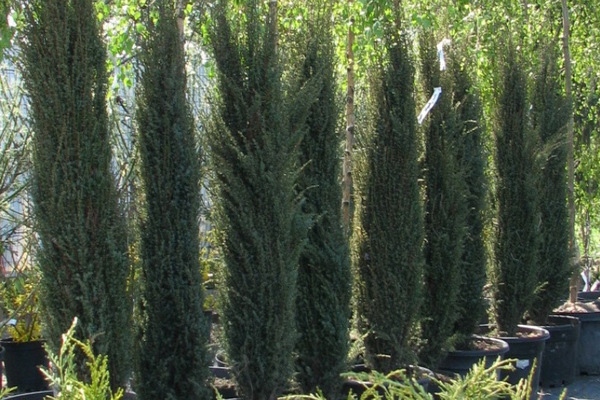 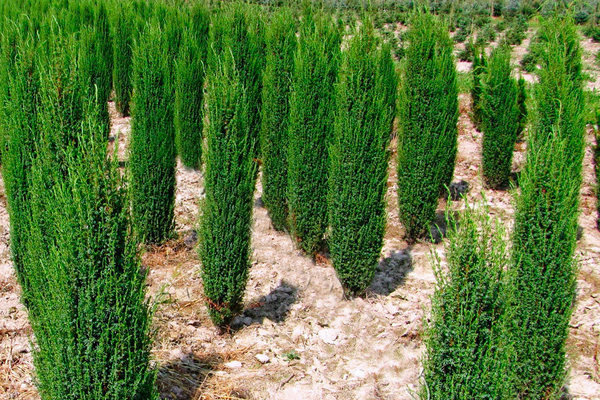 Since the columnar compact juniper tree of the ordinary Arnold variety looks great with its evergreen needles in almost any composition, it is actively used to create various landscape images. They are planted for decorative purposes in squares and parks, as well as for decorating garden spaces. You can plant the Arnold juniper variety as a free-standing one, you can build a living wall from this juniper variety, and also plant it in an alpine slide or a Japanese garden.
Thanks to the phytoncides that are part of the common juniper Arnold, the culture is often planted on the territory of sanatoriums, since it helps purify the air. 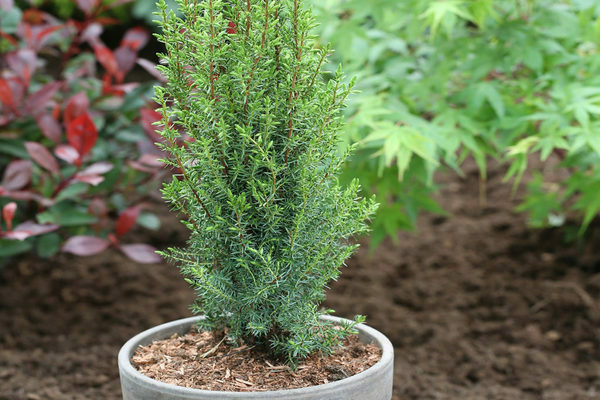 The agrotechnology of the Arnold juniper variety is not particularly difficult. The main thing is to choose the right place for planting, which should not be deprived of the sun's rays. It is the sunlight, which comes evenly throughout the day, will give the beauty of the needles and the crown of the plant. If you plant a juniper in the shade, then the color of the needles will be pale, and the branches will grow poorly. Only a slight shadow is allowed here.

As for the soil, there are no particular complaints here either. The only thing to consider is that the plant grows poorly on clayey, heavy soils, and is responsive to sandy, loose, moist substrates with weak acidity. Considering this, a drainage layer should be laid out in the planting hole, and sand should be added to the soil.
If you are planting multiple crops, then they should grow at least 2 meters apart.
Arnold common juniper variety does not like dirty city air, so it will grow better away from factories and industrial enterprises.

The planting material is pre-soaked in water before planting the Arnold juniper variety. This is done so that the plant is well saturated with moisture. The seedling must spend at least 2 hours in the water. If the seedling has open roots, then it is better to pre-hold them in a solution that stimulates the root system of the plant. For example, you can use Korenvin.
The optimal period for planting will be the second half of spring or early autumn. In advance, you should dig holes, the size of which will be larger than the root system of the plant. A thick layer of drainage must be laid in the pits. It is good to use sand or gravel as it.

It is better to make the soil yourself. It will consist of half of the leafy soil, of peat and sand in equal parts. Here, great attention must be paid to the root collar. So, if the seedling is young, then it should be left at ground level, and if the plant is adult, then the root collar is left 5 or 10 cm above the ground. If this order is neglected, the shrub can dry out after transplanting.

Common juniper Arnold is a moisture-loving plant. Seedlings that have just been planted on the site should be watered about 2 times in 7 days, while pouring at least a bucket of water under each bush. If the summer is hot and with little rainfall, then it is necessary to spray the needles of the plant, since it is through it that a lot of moisture leaves. For an adult plant, 3 waterings per season will be enough. In this case, three buckets of water should be poured under each bush. If the drought lasts a long time, then the number of irrigations is doubled.

Arnold juniper does not need excessive fertilization. It is only necessary to feed the plant once at the end of spring with a special fertilizer that easily dissolves in water "Kemira Universal" at the rate of 20 grams per bucket of water. Or you can use Nitroammofosk.

Loosening the soil and mulching

In order for the soil to retain moisture as long as possible, and weeds do not grow under the crown, it is necessary to spread a thick layer of mulch twice a year. This should be done in early spring and autumn. Also, so that air can freely penetrate to the roots, it is recommended to loosen the soil under the crown at least once a week.

Juniper Arnold: the formation of the crown of the plant

Juniper of the Arnold variety must be cut once a year, in the spring. Crown formation is reduced to the removal of old, dry and diseased branches. Here you should act very carefully, because overdoing it, you will wait for a new growth of healthy branches for a long time.

Work before the winter months

The Arnold common juniper variety is highly resistant to frost, patiently withstands 30 degrees of frost. However, the tree cannot stand heavy snowfall. Here it is necessary to tie the crown with twine or rope so that the snow does not break the branches. If the culture is young, then you can cover the crown with spruce branches or sprinkle with peat.

The Arnold juniper variety is propagated by both seeds and cuttings.

Arnold juniper seeds are rarely propagated, since this is a long and laborious process. Only fresh seeds are suitable for reproduction here, which are pre-scarified for better germination. That is, the seeds are placed in the cold for 5 months. After that, the seeds are sown into the ground and watered until germination.

The second method is the most popular among gardeners. Lignified cuttings are used for reproduction. So in the spring, you should cut off a fresh branch with a small section of an adult plant and plant it in the ground before it takes root.During the growth of the roots, it is necessary to maintain an air temperature of about 15 or 18 degrees, after a while the temperature should be kept higher, about 22 degrees.

The plant can also be propagated by layering, but this is not recommended, since in this case the beautiful crown of the tree and, accordingly, the decorative function of the plant are disturbed.

The common juniper Arnold is most vulnerable to various diseases and to pest attacks in the spring, since after winter any organism is weakened.

In order to protect your Arnold juniper from insect attack, you can use preparations containing sulfur or phosphates. Also, do not forget about proper care and loosen, feed the plants, water and mulch the soil in time.

In addition, for prophylactic purposes against fungal diseases, plants should be planted at a considerable distance from each other. Especially when it comes to a pear. Because fungi can move from one plant to another, changing prey every year.

Juniper Arnold looks very impressive in any landscape design and perfectly purifies the air. Considering that the plant is unpretentious, it can be grown by any gardener, observing the standard rules for plant care.

Juniper Arnold: video about the variety

Potato harvest - increasing the yield, how to get it right 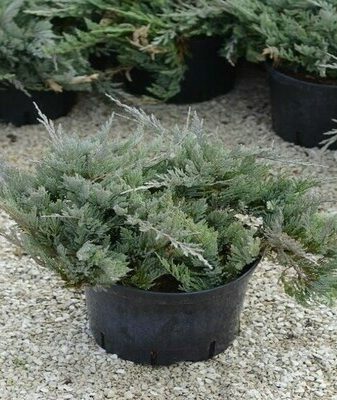 Juniper Blue Chip
The Blue Chip Juniper is considered one of the famous decoration shrubs that cover ... 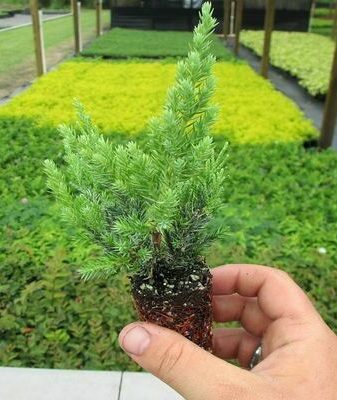 Juniper transplant
Juniper can be found more and more often in summer cottages. The beauty and simplicity of this plant, ... 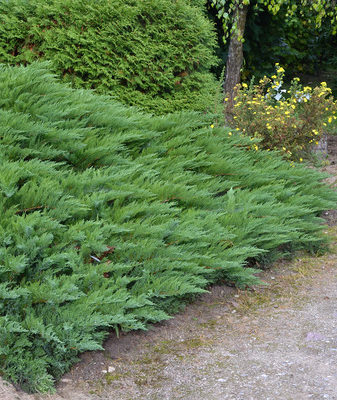