The article describes in detail the Colorado potato beetle on eggplant: causes of appearance, harm, fight by various means, prevention.

Any gardener who first decided to grow eggplant will be very surprised when faced with this problem. We are all accustomed to the fact that the Colorado potato beetle attacks potato plantations, but we do not at all take into account that eggplants also belong to the nightshade family, which means they will definitely like the Colorado beetle and its voracious larvae. How to get rid of this obnoxious pest? How to treat plants so that it does not affect the taste and useful properties of vegetables? Use insecticides, homemade infusions according to folk recipes, or collect harmful insects by hand every day? It is these questions that we will discuss with you in this article.

Colorado potato beetle on eggplant: the appearance of beetles 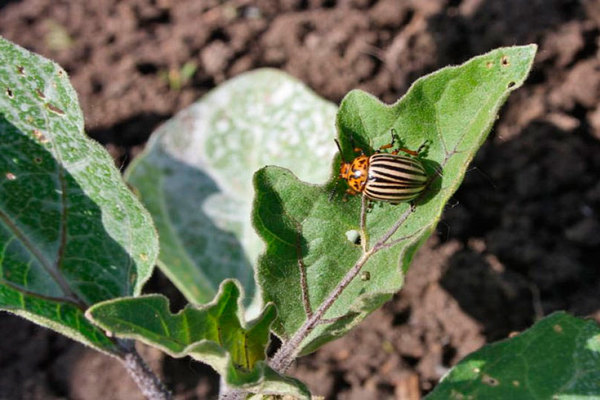 Colorado potato beetle on eggplant: the appearance of beetles

As long as the eggplant seedlings are in your home, there is nothing to be afraid of. And as soon as you put her in a greenhouse or in open ground, wait for guests. If you notice that the eggplants have begun to grow more slowly, someone is persistently nibbling the foliage around the edges, then these are the first signs of the appearance of beetles. And if the back of a striped pest flashed among the plantings, then there is no doubt that your eggplants are eating the larvae of the Colorado potato beetle. Inspect the foliage from the back side - at first the pests feed there, then they make their way further. And if you find eggs of a poisonous orange color, then in the next seven days expect replenishment - new hungry larvae will appear. If the plant is severely damaged by insects, then it gradually withers, stops growing and may die.

Colorado potato beetle on eggplant: why it is necessary to destroy insects 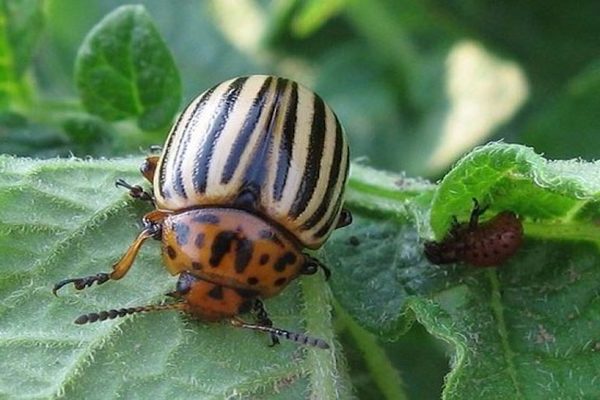 Colorado potato beetle on eggplant: why it is necessary to destroy insects

The Colorado potato beetle is very hardy, it adapts to unfavorable environmental conditions, as well as to the drugs with which gardeners are trying to fight it. But it is imperative to fight him, because if nothing is done, he will eat up all the plants and in this case you can forget about the harvest. After destroying one plant, the insects will move to the next and so on until they have eaten all your eggplants, potatoes and tomatoes. Therefore, the fight must begin at the same moment as you find the first beetle or larva. It is the larvae that, before turning into adult insects, have the greatest appetite and gnaw leaves around the clock. And adult striped individuals are dangerous in that they lay eggs from which after a while a new generation hatches and pounces on your plantings with appetite.

How to process eggplant from the Colorado potato beetle 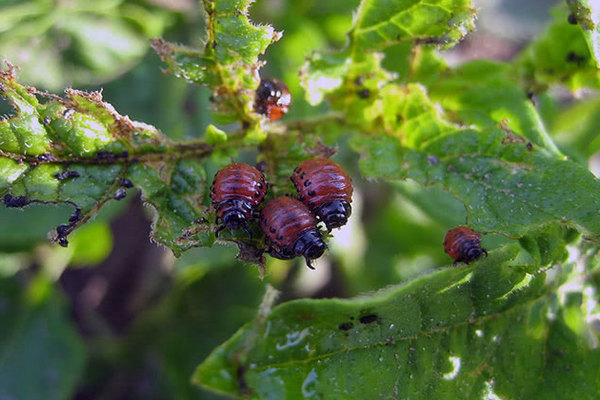 How to process eggplant from the Colorado potato beetle

I may disappoint you, but there is no universal way to deal with a Colorado pest. All means must be used in combination, then it will work in the best way.

In my opinion, this is a controversial method, since in the garden we are primarily fighting for an environmentally friendly harvest. But many people prefer the chemical method, trusting only him, so it is impossible not to mention it.

The first chemical treatment can be carried out immediately after planting the seedlings, before the pests have appeared. This preventive measure will give the plants the opportunity to adapt, build up a strong root system and green mass.For spraying use drugs "Prestige" or "Masterpiece". Then, after a while, you can re-process and spray the leaves, using for this already other preparations: "Aktara", "Presto", "Decis", "Inta-vir", Twix ". Later, when the plants bloom, the treatment can be repeated again using a preparation from the same list, but different from the previous one.

All these treatments can be carried out without waiting for the attack of pests, changing the drug three times, then the beetles may not appear. It is extremely important to change the drug, since during the time interval between spraying insects can adapt and the second time the drug will not protect against them. But the benefits and environmental friendliness of fruits in this case, for me personally, is questionable ...

During the ripening of the fruit, treatment with drugs should be carried out only if the beetles did appear. You can use biological products such as "Aktotsid", "Fitoverm", "Aktofit". Always remember that it is important to properly prepare the drug, observe the dosage, as well as wear gloves and rinse the dishes thoroughly afterwards.

The safest method for plants and for the future harvest is to collect beetles and larvae by hand. Of course, this method is not applicable to eggplant plantations, but if you have a dozen bushes in the garden or in the greenhouse, then this method will be the most effective. Prepare a saline solution, pour it into a specially prepared container and put the collected larvae and adult beetles, as well as egg clutches, there. Sometimes the procedure will have to be carried out twice a day, and then it is best to burn the collected pests.

Also, from available tools, you can prepare spray solutions that do not harm the plants and the expected yield. Use plants with a strong pungent odor for the solution: garlic, wormwood, onion husks, celandine, tobacco or tobacco dust is also suitable. Grind plant materials and fill with water (1: 2) and leave for a day. Then add grated or liquid soap and spray on the plants.

You can dust the wet eggplant leaves with tobacco dust or wood ash, the Colorado potato beetle does not like these ingredients, so it will in every possible way avoid such plants.

The fight against harmful insects should be started from the moment the first signs appear and all available means and methods should be used in combination, only then there is a chance to quickly cope with the problem.

You can carry out a set of measures that minimize the likelihood of Colorado potato beetles appearing on your eggplants. Firstly, the simplest thing is to plant around the perimeter of the eggplant bed or among the bushes with plants with a strong aroma that is unpleasant for beetles. It can be velvet, marigold, nasturtium, celery, mattiola. This will not guarantee you protection, but it will definitely reduce the number of insects.

After transplanting, for some time, the seedlings can be covered with plastic five-liter bottles, this will give the plants the necessary time to take root in a new place.

The Colorado potato beetle crawls on the ground, so installing a protective fence made of mosquito nets and blocking insects' access will also save the plants.

The choice of methods of struggle is always yours. The main thing is not to ignore the appearance of pests and not to hope that the problem will resolve itself. The bugs will not disappear anywhere, but if you take action in time, then your eggplants (and all other nightshades) will be saved.

Cabbage seedlings: TOP tips, when to plant, how to grow from a photo