When to harvest spinach

This plant characterizes itself as a precocious species. Its advantage is a very high cold tolerance, so it can be harvested from spring to late autumn. The beneficial qualities of spinach can be preserved only when the crop of this plant was on time and correctly harvested. In this article, we will consider how long the spinach should be collected and how to do it, and also whether overripe leaves can be used and for what purposes. All this and not only you can find out further.

When to harvest spinach? 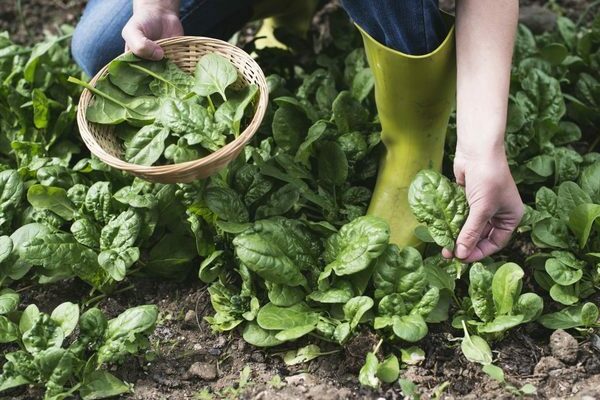 About 3.5 weeks after planting the plant, you can start harvesting spinach, very useful and juicy leaves. When exactly you need to pick spinach depends on a large number of external factors. The most common reasons for harvesting spinach at one time or another are the climatic conditions in which the plant is grown and, accordingly, the variety to which the crop belongs.

The most useful are young spinach leaves, quite juicy and tender, quite fragile and having a bright green color. The young stem of this plant is brittle and thin. If the stem of spinach is fibrous and rather thick, then this means that the plant is overripe, and its leaves are now bitter in taste and, moreover, have lost their useful characteristics. The same happens when brown and yellow spots appear on the leaves, as well as holes and other visible damage.

Basically, the reason for starting the action when collecting spinach is the appearance of the plant. As soon as 5-6 leaves have formed on the plant, you can begin to delight yourself and your loved ones with a wonderful, healthy and tasty harvest. The period for collecting spinach lasts until about 10-12 leaves are formed, because after that, in most cases, the shooting period begins.

Spinach is one of those plants that are able to ripen quite quickly and form stems. In the case of spinach, after overripe, it ceases to be suitable for human consumption, which is why you need to keep pace with the harvest so as not to miss this moment. Indeed, in addition to the fact that spinach, when overripe, almost completely loses its taste characteristics and useful properties, a huge amount of oxalic acid begins to accumulate in its leaves, which is very harmful to humans.

How to harvest spinach from the garden 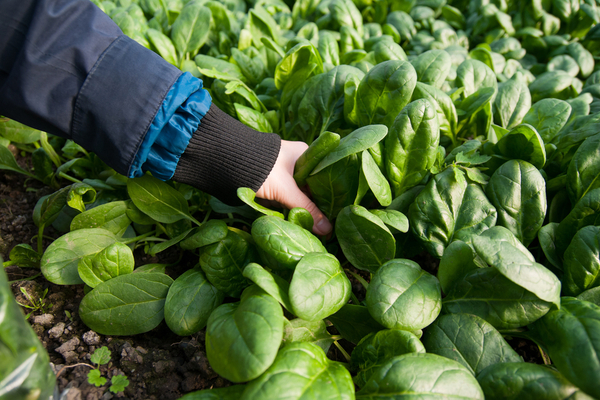 Spinach is a relatively delicate plant, so it should be harvested either in the morning or later in the evening. If you pick spinach leaves during the day, they can wilt quickly. This plant is cut or plucked directly from the root system. If this is the last spinach harvest, then the rosettes are cut at the root. In this case, the leaves will become less dirty with dirt, and the roots of the plant, remaining in the ground, will decay in the same place, giving back to the ground the minerals collected during the growth.

Although it is a proven fact that spinach leaves last relatively longer when pulled out with the root system. It is possible to harvest spinach all at the same time, and if you have a lot of time, then you can not pick off all the leaves, but as they ripen, choosing first only the largest ones.

In order not to accidentally damage the spinach bush, when harvesting, the leaves are quite carefully and carefully cut or break off from the stem, and not torn off in a rough form.Only up to half of all leaves are cut from each plant. With this selective method, you can significantly increase the period of harvesting leaves and complete it at the very beginning of shooting. When this greenery is thickened on the ridge, the rosettes of the plants interfere with each other, and they do not grow and develop well, in this case, young greens should be thinned out and used in cooking.

Now let's look at and summarize the basic rules of how to collect spinach:

Watering in the morning should be excluded, or the greens should be allowed to dry completely.

How to collect spinach seeds? 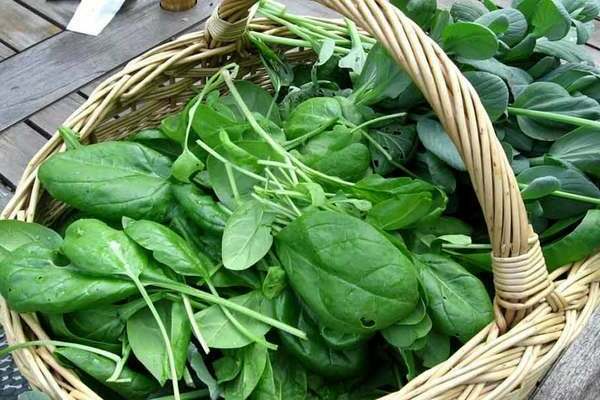 Since we don't often have spinach seeds on our shelves, it would be logical to leave some bushes for the seeds, which are usually the strongest and healthiest.
Spinach is a dioecious plant, so both male and female bushes are left for seeds. These bushes are not harvested, but they are allowed to accumulate a sufficient amount of strength. They are pollinated with the help of the wind, and after that, the male specimens dry up. As soon as this happens, they need to be removed from the garden.

On female specimens, the spinach seeds will be ready for harvest when their leaves turn yellow and the lower seed buds begin to open. At this point, the plant is removed and suspended in a sufficiently dry and ventilated area for the seeds to ripen. Later, the spinach seeds are taken out, dried again and put into paper bags for further storage, not forgetting to write the date on the bags in advance. After that, the seeds are ready for further germination within 4 years. 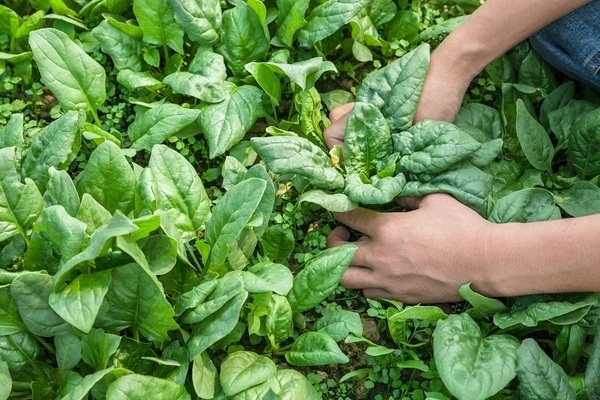 It has been proven that freshly harvested leaves of this plant are considered the most healing. After all, it is in them that there is a large content of useful elements. If there is a need to keep the leaves fresh for some time, then they act in this way: put greens in a regular wet towel, wrap them up and leave them in a prepared container for vegetables. This method will only save spinach for two days.

There are other methods of storing harvested spinach crops:

If it is necessary to preserve the harvested spinach for a longer period, then it is frozen, dried and canned. If you follow all the rules of storage and bookmarks, then you can preserve all the usefulness and freshness of the plant for about several months.

Where can overripe leaves be applied

Overripe spinach leaves can still be used, for example, in cosmetology. A rejuvenating face mask is prepared from them, it is done like this:

Up to how many times a year is spinach harvested

Spinach is considered quite unpretentious to grow and care for. It doesn't take any special effort or expense to grow these wonderful greens. On average, the crop is harvested 2 to 3 times a year. In general, the yield is highly dependent on the planting period and on the type of plant. The highest yield is in the spring and early autumn. Spinach doesn't like hot weather, likes regular and good watering, and often blooms early. Therefore, it is possible to achieve high yields of spinach by frequent watering and timely thinning, as well as to limit spinach leaves from direct sunlight. Thinning should be done one week after germination, while it is also worth loosening the top layer of the earth.

In dry weather, watering is carried out once every 2-3 days, this is done as follows: up to 15 liters of water per square meter. During the growing period, it is forbidden to apply fertilizing with manure, otherwise the taste of the leaves will noticeably deteriorate. The same is the case with mineral fertilizers, since spinach tends to accumulate dangerous nitrates. Spinach is a crop that is not designed for long-term storage; it is better to harvest it directly for immediate consumption. Immediately after collecting these leaves, they should be placed in a dark and cool place.

Observing all the rules for growing and collecting spinach, its greens will undoubtedly delight you not only with their taste, but also with a huge amount of vitamins. Spinach will bring its zest to cooking and help to cope with excess weight and age-related changes. We hope this article helped you understand how and when to harvest spinach.

How to transplant a rose: large, blooming, climbing. Instructions

Worsley: TOP secrets of home care with a photo

Currant Galinka: a description of how to grow a variety, photo and video 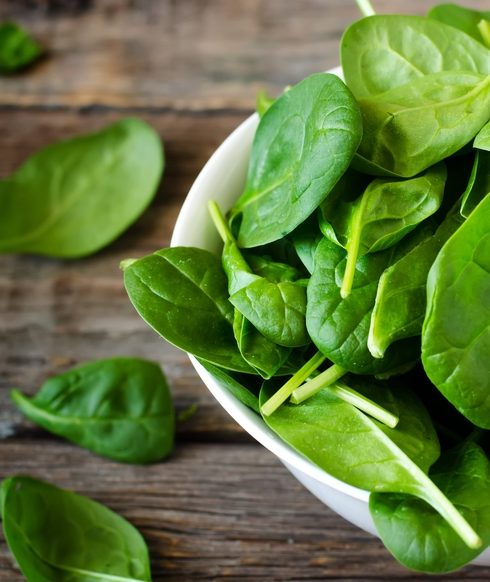 Valuable tips for growing spinach in your garden
Everyone knows that spinach leaves have many vitamins and minerals that humans need. Spinach in ... 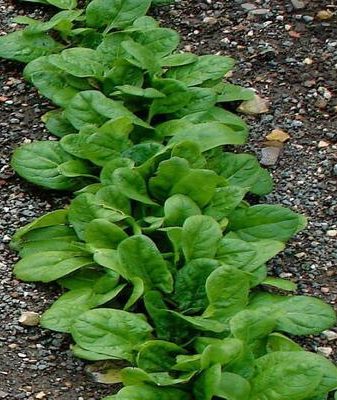 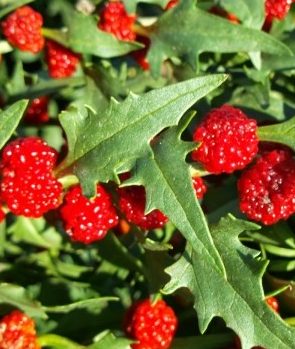