Clematis President can easily grow even an amateur gardener, because the subspecies is characterized by a rather hardy plant and not at all capricious in care. According to its classification, the subspecies belongs to the Florida group. This variety appeared back in the 19th century, and it bothered to get its name in honor of the president of the Royal British Society of Florists and Gardeners.

Clematis President: description of the variety 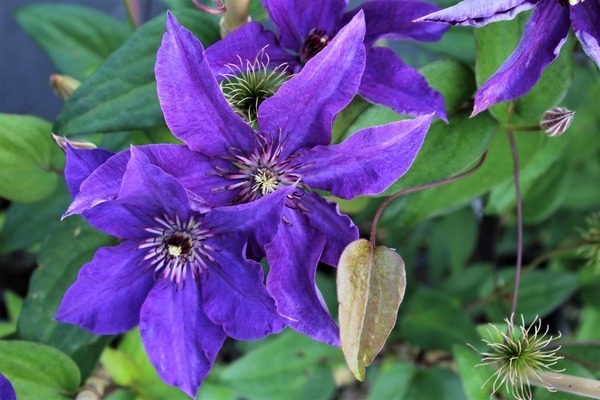 This large-flowered subspecies of clematis is a representative of shrub vines, has rather strong and powerful roots that can grow up to 2.5 meters deep and up to one meter wide. The shoots of the plant are rather thin, green in color, have very strong antennae, which cling to the support. The leaves are oval in shape, with a pointed tip, grow up to 10 centimeters in size. Flowers of this variety can form both on new stems and on old ones. The flowers of clematis President are quite large, on average they can be 15 centimeters in diameter, grow on elongated peduncles. The petals of the flowers have a purple tint, and from the base to the tip, pointed and slightly bent upwards, there is a strip, the color is slightly paler than the main one. The sepal margin has a slight waviness. The core of the flower is light in color, thanks to the snow-white base of the burgundy stamens. When planting this plant, a support should be installed, with an approximate height of 2.5 meters.

Clematis flower President received great popularity and love mainly for its long enough time and abundant flowering, and twice. In the first period of flowering, the buds are formed on old stems and begin to bloom in the last days of May and the first half of June. And the second time, already on the new branches, beautiful flowers are formed, delighting with their splendor from the middle of the summer period to August. Clematis of this variety is considered a fairly large and powerful plant, with the arrival of warm days and nights, the stems of this bush can stretch up to 10 centimeters. During the summer period, a seedling of this variety forms up to 4-5 tall stems. The plant easily wraps around trees and shrubs. Garden trellises are installed near the structures for this plant, which are completely hidden at the time of full development. This variety of clematis is actively used to hide unsightly walls and defects in structures, as well as decorate porches, verandas, terraces and balconies with it. It is worth noting that this clematis can grow up to 30 years in the same area, without transplanting. If you are going to grow this variety of clematis at home, then know that this plant requires a fairly large container (such as a barrel).

This clematis is characterized as a variety with a sufficiently high level of frost tolerance, it can withstand cold temperatures down to -28 degrees. The cultivation of this variety is carried out in the south of our country, and in central Russia, and even in the most difficult climatic regions, but with mandatory insulation for the winter period of the year.

Clematis president: cultivation of the variety

Hybrid clematis President begins to be planted in the spring and summer, but the best period for this action is September-October.

Requirements for a young seedling.

It should be noted right away that shoots from containers take root much easier and faster. But with open roots, they should be examined very carefully. The best option would be if the roots of this plant reach a length of about 30 centimeters, and there should be traces of damage and thickening of all kinds on them. The shoot should have large buds or open leaves. Before planting a young plant, its roots should be soaked for several hours in warm water, using also a growth stimulant drug. 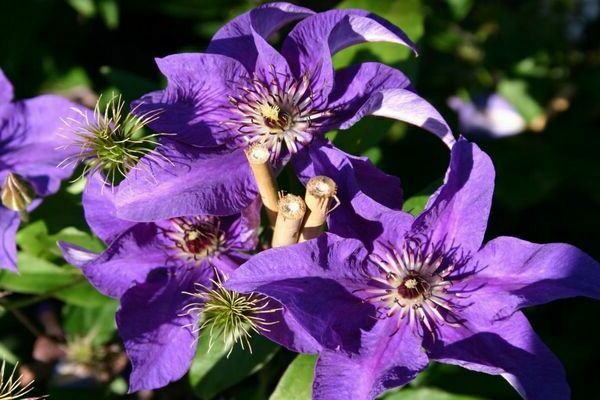 Clematis President: photo of the variety

The hole for planting this seedling variety is prepared in advance, in order for the soil to settle. The size of the fossa should be about 60 by 60 centimeters, the same in depth. At the bottom of the landing hole, drainage is laid out, with a layer of 10 centimeters. The soil is mixed with half a liter of ordinary ash and one bucket of humus, complex fertilizer, following strictly according to the instructions.

The planting hole is not compared to soil, leaving a small depression. And in the summer, they regularly add earth. In the spring, the top of the soil is removed from the fall planting plant and a deepening is made in order to facilitate the germination of new shoots from the still weak root.

When the shoots grow up, they are neatly enough tied to the support and directed towards the lower one. Some shoots are given a horizontal direction so that flowering occurs around the entire perimeter of the garden trellis. This lush flowering plant needs systematic maintenance in order for the plant to develop well. This clematis requires a watering procedure every week, and in extreme heat and drought, the number of waterings is increased to three times a week. In the first year of the plant's life, up to 20 liters of liquid is poured under the bush at a time. And for an adult shrub, respectively, twice as much, up to 40 liters of water. After the watering procedure, the soil is loosened. In addition to all this, mulching is carried out in hot weather; dry grass and weeds are used as mulch.

It should be said that in the first year of clematis's life, buds are cut off in order to strengthen the roots of this shrub.

If there is such a possibility, then organic fertilizers are applied to this variety of clematis. Before the winter season, humus is sprinkled on the landing hole, and in the summer, liquid mixtures of mullein or bird droppings are poured three times. Also, clematis is fed three times with mineral fertilizers. They do it like this:

Specialty stores have a huge number of different flower dressings that are also suitable for this plant.

To regulate the flowering process of hybrid clematis, the President, his shoots are cut twice. After the first period of flowering at the bush, absolutely all last year's shoots are cut off at the very base. In September, those shoots that have grown since the spring are cut off. And in this case, there are two ways. When cutting off the entire shoot entirely to the very root, in the next spring period, the early flowering period can not be expected. To begin flowering in June, only the generative part is cut off on new shoots, where the flowers grew.

Preparing for the winter period.

The endurance of the President's hybrid clematis is at a high level, but growing in central Russia, the plant still needs shelter for the winter. In the autumn, mulching is carried out with sawdust, peat or fallen leaves. The plant is very carefully removed from the support and folded very carefully and carefully. With the arrival of frost, coniferous branches or dried tops of flower and garden crops are laid out. They begin to open gradually, with the onset of warm days. 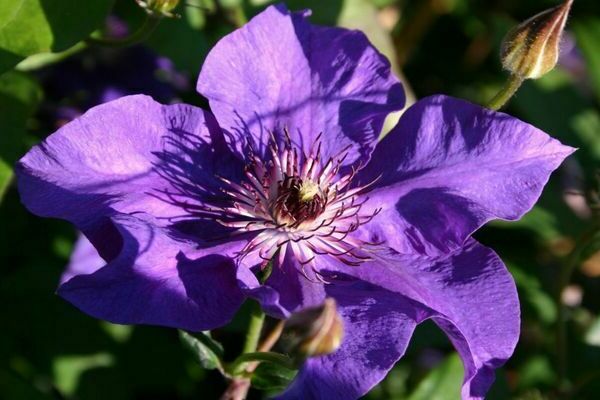 You can propagate the clematis flower President in several ways: by dividing the bush, by cuttings, grafting, using layering. A rather large bush of this clematis variety does not often seem to be divided, although sometimes stems are formed far enough from the main trunk. They can be dug up quite easily, and they take root and adapt quickly enough. Experienced gardeners propagate this plant by grafting, which is often very difficult for amateurs to do. And propagation using layering is the simplest and easiest method.

Reproduction of the President clematis hybrid variety with the help of cuttings begins in the period before the flowering of the plant, when small buds have already come out.

Clematis President: reviews of the variety 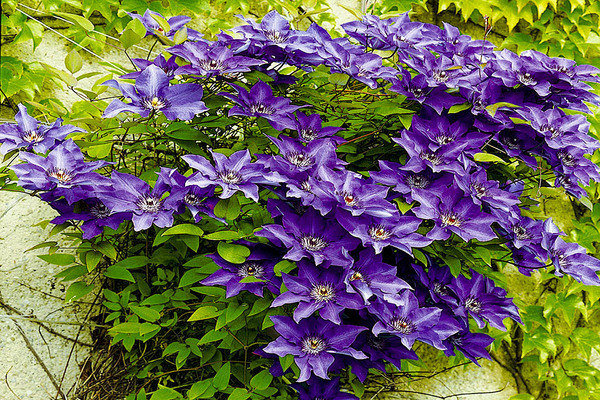 This rather chic and magnificent clematis variety, with high-quality care, will delight you with a spectacular and beautiful flowering. Covering it for the winter and feeding it in a timely manner, it will be possible to admire its appearance for many years later.

There are a great many reviews on the Internet about this subspecies of clematis. Here are some of them:

My clematis bushes President is about 20 years old. There is also such a variety. I grow it under the shelter of a building, so I don't make shelter for the winter. Clematis of the President variety rises steadily over two meters.

The President planted the clematis variety a year ago. The root was obtained from a bush from friends. The root system and stems were strong enough, therefore, they were left to bloom already in the first summer period.

I have already purchased Clematis President twice. The first was not lucky, in the autumn season I did not make a shelter and the bush was frozen. This time I am taking care of it in full, and I don’t forget about feeding. Now she will have a long flowering, I'm sure of this.

Japanese quince: TOP secrets of planting, reproduction and care with a photo

Apple tree in garden landscaping: the best tips with photos 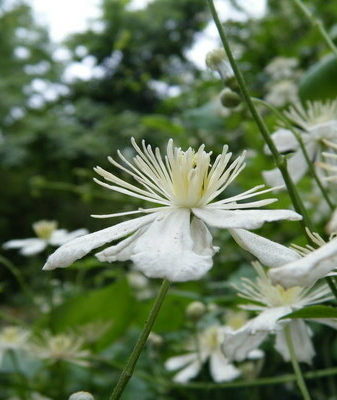 Clematis Fargesioides
Clematis varieties with small flowers have their own specific charisma. During the flowering period, all ... 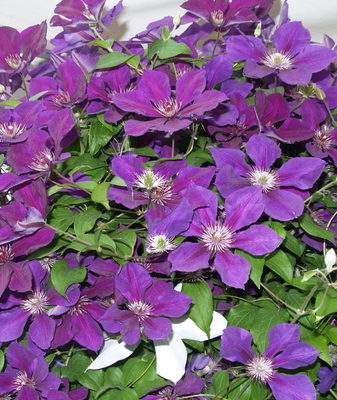 Clematis Jacqueman
Clematis are delightful shrubs that have won the hearts of our gardeners for quite some time ... 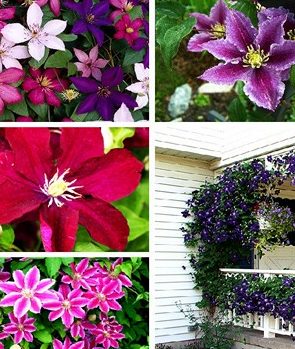