How to plant tomatoes two per hole
4 871

How to plant tomatoes two per hole

If you turn to the Internet with the question of how to plant tomatoes correctly, then you can find many options, one of which will be planting two tomato bushes in a hole. How to plant tomatoes two in one hole and whether this is correct, we will find out in this article.

How to plant tomatoes. Description of tomato 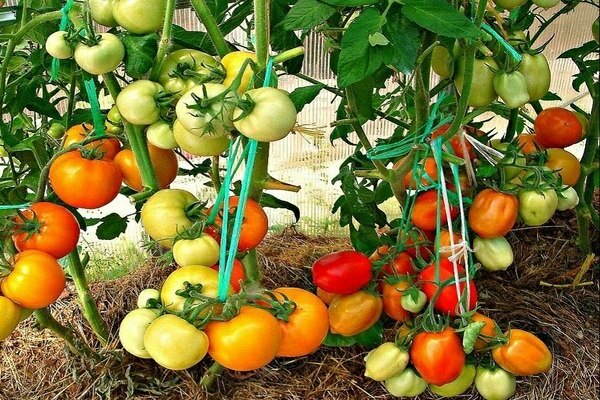 Tomato is perhaps the most popular vegetable in our garden. Not growing tomatoes in Russia, except perhaps a lazy gardener. Currently, a wide variety of species and varieties of tomatoes have been created, which differ from each other not only in external characteristics, but also in taste, as well as in the timing of the ripening of the crop. Therefore, gardeners have plenty to choose from.

Due to the fact that tomatoes have an excellent taste and they are very useful, since they contain a lot of vitamins and microelements that are so necessary for human health, they like to eat the fruits of tomatoes raw, add them to salads. Tomatoes are also used to prepare various dishes and sauces. Many preparations for the winter are made from tomatoes, including tomato juice, beloved by many.

This vegetable is popular in all parts of Russia. The only thing is that in central Russia and in the south, the culture is grown in the open field. And in the northern regions, greenhouses are used, sometimes even heated.

Greenhouses that are built on private backyards are not large. Plus, the shrub does not bear fruit for a very long period. Therefore, in order to increase the productivity of shrubs, some gardeners plant two bushes in one hole. How to plant tomatoes in this way - read below. 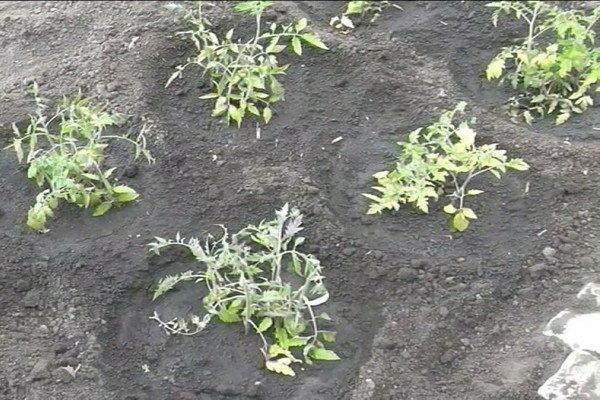 The classic way to plant a tomato is one plant per hole. It is widely believed among gardeners that tomatoes should be planted in this way, because the plant needs maximum nutrients and water during growth and development. Which cannot be achieved with a different planting method.

However, this rule applies only to those tomatoes that are grown in conditions close to ideal. In practice, crops are often susceptible to both disease and insect attack. In addition, inappropriate weather conditions and inadequate care often lead to the death of the bushes.

In those regions where the summer is especially hot and dry, a different planting method has long been used. Namely, two plants in one hole. With this method of planting, tomatoes help each other, protecting them from direct sunlight.

The soil for planting is prepared in advance. Moreover, this stage does not differ at all from the preparation of the soil during the usual planting of a tomato.So, greens, carrots, onions, parsley and dill will be good predecessors of tomatoes.

Then, in the fall, after harvesting, it is necessary to dig up the land properly, having previously introduced organic fertilizers into it, as well as ash. Care must be taken not to leave fertilizers on the ground.

Then, before planting, make holes in the shape of an oval. They can be dug both staggered and in one line. The main thing is that the distance between the pits remains at least half a meter.

In areas where dry summers prevail, a trench is dug for the tomato about twenty centimeters deep. And in this trench, holes are already being made for planting tomatoes.

Before planting tomatoes in the hole, you must first pour boiling water over the holes. This is done in order to destroy all pests and their larvae. If the next day you notice holes in the hole or holes, then you need to add more drugs or insect pests.

After that, it is necessary to add a mineral fertilizer complex to the hole and cover it with a small layer of soil. Then, after a few days, you can start planting tomatoes.

How to plant tomatoes in the ground: instructions 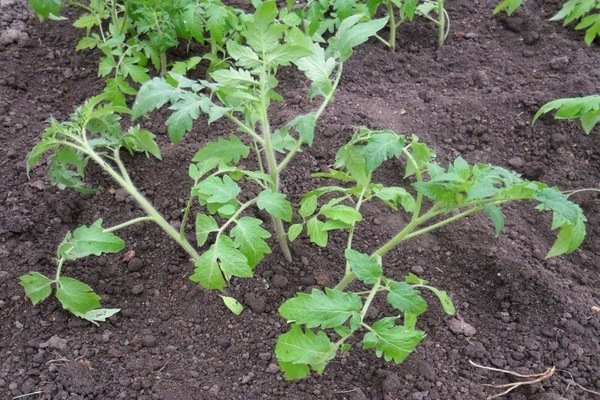 With the paired method of planting a tomato, it is necessary to place two seedlings opposite each other or crosswise in one hole. The main thing is to keep a distance of at least 20 cm between seedlings. Only in this case, both bushes will get an equal amount of nutrients and moisture. And they will not interfere with each other during growth. This planting method is also called two-root planting.

The seedlings must be arranged in such a way that the tops of the plant are directed to the north and the roots to the south. Sometimes the seedlings are laid sideways, with the roots to each other. Further, the root system is covered with soil. If the seedling has a very thin stalk, then the plants should be planted deeper by about 5 or 10 cm. It should also be borne in mind that with this planting method it will be necessary to grow twice as many seedlings.

In addition, in hot regions with dry weather conditions, gardeners specifically plant in one hole a weak bush paired with a strong plant. Throughout the growing season, as watering and feeding, a weak plant will not consume many nutrients. And the main part of them will go to the stronger plant.

However, a weak bush will serve as a reliable support throughout the season. Since it will shelter a neighbor from the heat, scorching rays, pests. And also the bush is better pollinated. Thus, the amount of the crop will be larger anyway.

In those greenhouses where there is not much space, you have to go to the trick in order to get more harvest from one square meter in the greenhouse. Also, in this way, you can grow different varieties, planting them in the same hole.

You can also choose varieties that are characteristic of tall bushes and plant them closer to the wall. Tomato varieties with a low stem are planted, on the contrary, closer to the center. Thus, the plants will not interfere with each other, and you will get the harvest of tomatoes at different times. With this method of planting, it is necessary to form even rows in one line.

The two-root planting method is usually applied to planting tomatoes using seedlings. If you plant directly seeds in the soil, then the number of copies will be higher.

To grow strong and healthy seedlings, three or four seeds are sown in one hole at a time. After the seeds have sprouted and leaves have appeared on the plants, weak and small plants should be removed. If all three sprouts are strong and healthy, then the bushes can be planted away from each other.

In addition to all of the above, some gardeners plant two plants in one hole, the lower part of the stems of which is wrapped in polyethylene. This method is good for the case when the seedlings are weak and lifeless.

In this case, the seedlings are initially grown in pairs in one glass at a close distance. This is done so that later it would be more convenient to connect two stems of crops.

Below is a method by which two weak plants are made into one strong fruiting bush.

During the picking of seedlings, two sprouts are placed in a glass at once, planting them at a close distance of about half a centimeter or a centimeter. Then they wait for the roots to harden a little and become about five centimeters thick. A small section of the skin is cut from the stem and incisions are made.

On one plant, the incision lines will be directed from bottom to top, and on the other, vice versa, from top to bottom. Thus, the resulting puzzle is connected and fixed in this position. Here it should be borne in mind that the cuts should not be very deep and exceed half the stem of the plant.

The plant created in this way has two root systems and is much more resistant to sudden changes in temperature. It tolerates drought better over a long period and holds up steadily during strong winds.

How to plant tomatoes - double planting of tall bushes 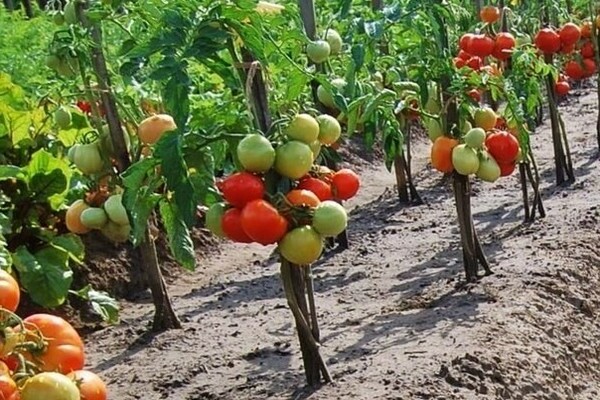 Bushes with a short stem are easier to plant in two roots than tall plants. There are already difficulties and contradictions about this method of planting seedlings.

Tomatoes that have a long stem can be grown using a support. Pegs, trellises, or other devices can be used as support.

It is necessary to water, loosen and weed the plants, as well as feed the soil with the necessary substances.

Difficulties begin to arise during the formation of tomato bushes. Tomatoes grown outdoors are easier to form than those planted in a greenhouse.

Experienced gardeners recommend shaping the bush so that it has only one main stem. As it turns out, it is best to form plants by leaving two main stems on each bush. This is necessary because the presence of two main trunks will prevent the unrestrained growth of one stem, which will eventually occupy all the free space in the greenhouse.

It is very important to cut off stepchildren who have grown from a tomato in time, because their uncontrolled growth will lead to a strong thickening of greens in the greenhouse.

Fertilizers for paired bushes are applied to the hole for each bush separately. Therefore, do not worry about the fact that any plant does not have enough nutrients.

How to plant tomatoes. Benefits of double planting tomato 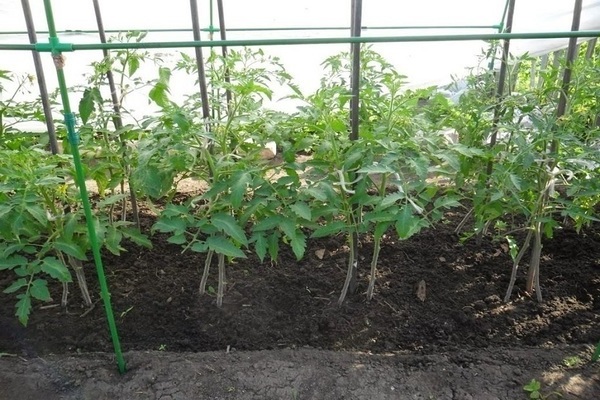 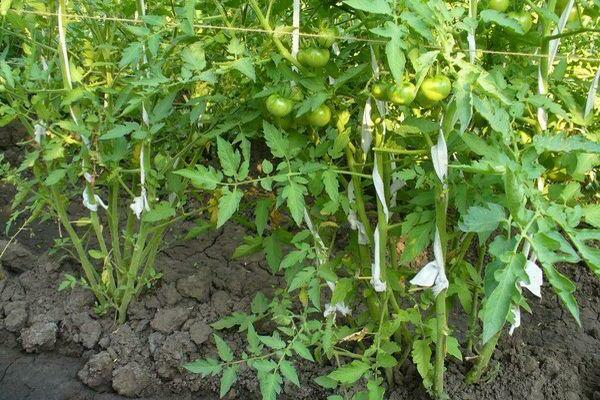 No matter how many advantages the described method of planting tomatoes has, not all varieties are suitable.

The same applies to varieties with complex brush formation. In this case, the tomato will shed its flowers, and there is a risk of being left without a crop.

Tomatoes that grow in one hole branch and grow very quickly. Therefore, they need to be formed constantly and in a timely manner by cutting off stepchildren, side stems and unnecessary branches. If you let the process take its course, the bush will become very voluminous, which in turn will make it difficult to care for it and will affect the number and quality of hearths.

In addition, an emerging pest or a disease that has arisen can spread to the second bush, if you do not take measures and do not notice signs of wilting of the bush in time. Therefore, it is better to choose varieties that are resistant to diseases common for tomatoes.

Tomatoes should be carefully monitored and looked after, not only when an infection occurs, but also for prophylaxis. It is optimal to use folk recipes against pest attacks or against the onset of a disease. Tomato beds should be weeded regularly.

It is good to process the bushes themselves with infusions prepared with garlic or onions. To avoid the attack of a pest, you need to put bait. If a diseased bush is found, it should be immediately destroyed before it infects the rest of the bushes. Still, it is better to treat other crops with special formulations for prevention.

In general, possible diseases should be prevented at the stage of growing seedlings, and not when the plants have already grown and are planted in a permanent place of growth. If you miss this moment during the growth of seedlings, then you can completely lose the crop. Even though you have planted the plants.

Thus, planting two tomatoes in one hole has many advantages and is optimal for hot regions, or if you have a small area. However, here you should follow the rules of planting and caring for plants. This is the only way to get the maximum of tasty fruits.

Rossioglossum: growing and care, description of the plant, photo

Aphids on a pear: how to fight and how to treat. TOP best tips

Aphids on fruit trees: how to deal with it. Means and preparations