How to form a hydrangea?

Beautiful hydrangeas with abundant and lush blooming in bright colors have always been especially popular among gardeners. Particular attention is paid not only to beauty, but also to the ability to take root in darkened areas. Among the varieties of hydrangea, you can find beautiful lianas, as well as shrub varieties of hydrangeas. But, in order for the culture to delight you for a long time with its beautiful and abundant flowering, it is necessary to provide it with the necessary care. It is necessary to properly water the hydrangea, apply fertilizers to it, mulch the soil - all these elements of care are vital for the growth and development of the plant. however, pruning is equally important to the plant. How to form a hydrangea correctly will be discussed in our article.

How to shape a hydrangea. The need for pruning 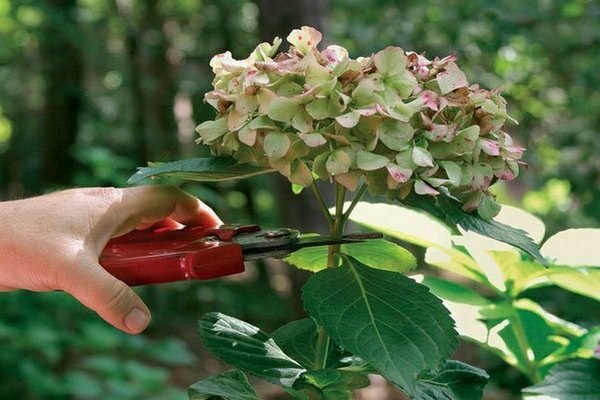 Hydrangeas are shrubs that don't really need pruning. But, if you want your plant to have a beautiful and well-groomed appearance, as well as to improve the quality of flowering, then the plant needs pruning. If you miss at least one year and do not prune the plant, you will immediately notice how the plant has lost its beautiful and well-groomed appearance.

Also, such a "skip" pruning will affect flowering, which will noticeably decrease. It is important to note that the dimensional data of the inflorescences also depend on the quality of the pruning performed. What plant pruning can give:

When pruning a plant, the appearance of more powerful shoots, a higher-quality growth is observed. And the fact that you need to radically rejuvenate the plant or urgently carry out its formation will not even need to think.

How to form a hydrangea correctly 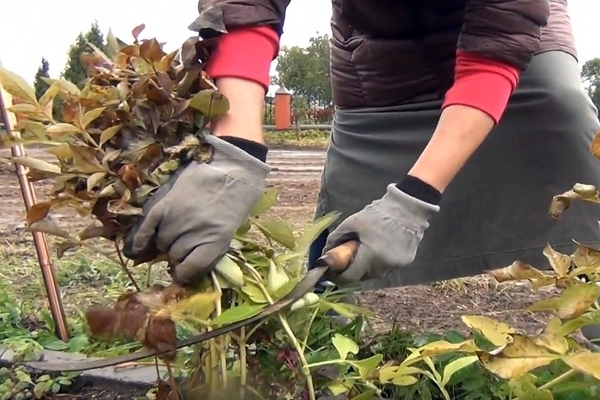 How correctly the hydrangea will be pruned depends on what type it belongs to.

Only one kind of hydrangea - large-leaved, differs in flowering on last year's shoot. To be more precise, on a young shoot that grew from the upper bud on the branches of the previous year. Moreover, the laying of flower buds took place in the autumn.

Buds are laid at the ends of the branches, and if you prune the shrub using standard techniques, the plant may not bloom at all. Therefore, this type of hydrangea needs only sanitary pruning of last year's inflorescences.

Concerning groundcover hydrangea, then it is characterized by a type of bush that is wide, rounded, lush, differs in flowering on the shoots of this year. But there are some differences in this type of trimming from other trims.

It will be sufficient for the plant to easily shorten the long branches, which will allow the bushes to become thickened, which will lead to the appearance of abundant flowering. All other varieties of hydrangeas bloom on the shoots of this year. When trimming them, you can rely on the classic technique. These types include:

Hydrangea: how to form a bush and when to do it 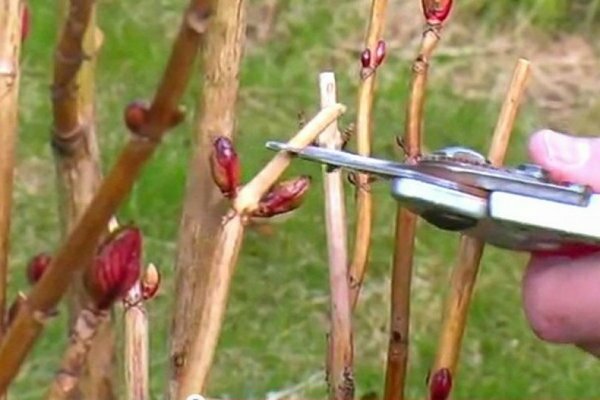 If you want a garden hydrangea that blooms on this year's shoots to have a lush bloom, it is important to choose early spring for pruning.

It must be carried out as quickly as possible so that the flowering growth can fully develop, so that it has enough time for this. The traditional time for pruning hydrangeas is March-April. It is necessary to pay attention to how the growth bud has swollen. There is no need to rush to carry out the pruning process before it appears. She will be able to indicate the place in which young shoots will appear, which will help to correctly prune.

Also, do not over tighten. Otherwise, new branches will be given little time for the plant to start flowering at the required time and prepare for the winter period. Many advise you to prune your tree hydrangea first. In turn, panicle hydrangea is a lover of a later type of pruning.

As we said a little earlier, the large-leaved hydrangea is distinguished by flowering at last year's growth. For pruning, it is best to choose spring and also as soon as possible. But the nature of this type of pruning will be significantly different from pruning other types of hydrangea.

If your hydrangea needs shelter for the winter, then pruning is carried out with the onset of the autumn period. But before you cover the plant, it will be sufficient to only slightly shorten the shoots, and already fully prune with the onset of spring.

How to form a hydrangea: what pruning includes 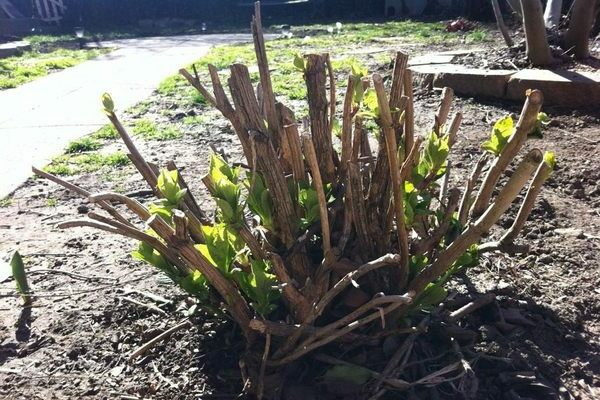 Carrying out sanitary trimming. It is necessary to remove old, damaged, weak and dry shoots of the last year's inflorescences.

Formative pruning is aimed at adjusting the density and shape of the crown. Young plants need to form skeletal branches.

Carrying out stimulating trimming. This haircut is carried out every year in order to get more powerful flowering.

Carrying out cardinal rejuvenation is a radical pruning. It is carried out instead of the three previously indicated pruning on an old, neglected, depressed plant bush.

Autumn pruning, which consists of removing inflorescences that have already faded, need not be carried out. With the onset of cold weather, the inflorescence of the plant has the property of changing color. It seems like someone sprayed the powder with a purple hue on purpose. Under the snow cover, such a hat looks very nice.

If you are planning to decorate your garden with dry inflorescences, you can prune last year's inflorescences at the same time as the main pruning. 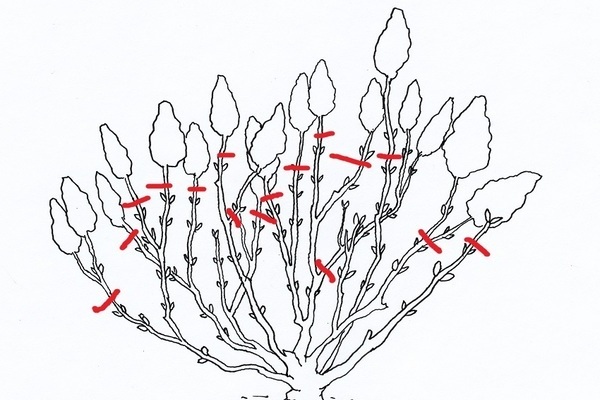 The initial pruning should be done within the first 2-3 years after you plant the plants. If you do not carry out formative pruning, then you will not be able to achieve the formation of a crown with skeletal shoots that will be evenly spaced. In addition, they may have a lack of strong branches, the growth of the plant does not occur correctly.

In the first year after planting the plant, there is no need to disturb it and create additional conditions for stress. If you do not want to distract the plant from fulfilling its main goal - to form a powerful and well-developed root system - pruning should be light, regulating, and most often sanitary.

Cut off all damaged and weak shoots on the seedlings. This pruning must be done when planting. The next pruning should be postponed until the usual time, opting for March or April.

If you plant under the stump, then you can simplify the formation process.But this will not be the best way to affect the growth and flowering of the plant. It is for this reason that many gardeners refused to carry out such a planting.

For the first time, powerful and large bushes should be cut to half the length of the branches. It is necessary to shorten young seedlings by 1/3 of the shoot. Already starting from 2 years after the planting, the bushes should be strongly pruned.

With the onset of spring, it is necessary to drastically shorten last year's growth, leaving only 2-3 well-developing buds. When pruning, it is necessary to ensure that the skeletal base of the bush is created, which will include strong shoots. It is they who will form a uniform crown and will be directed outward.

How to shape an adult hydrangea 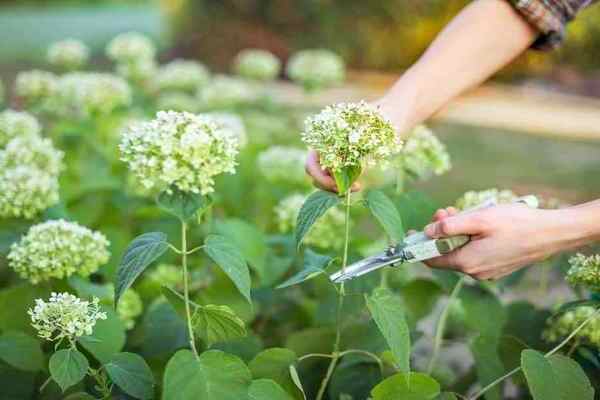 As early as 3 years after you have planted your hydrangea, you can carry out standard pruning, which will include:

How should you care for hydrangea after pruning?

After carrying out any type of pruning, the plant will need top dressing. Top dressing will be able to create an incentive for the emergence and development of new shoots, the growth will not be able to stretch out and become thinner.

As a type of fertilizer, it is best to opt for the mineral form of top dressing. At the end of the pruning procedure, it is best to mulch the soil. In order to create a thick layer (5 cm) of mulch, it is possible to add compost, manure, peat and humus.