Over the past decades, everything has changed a lot, and now gardeners are offered a large selection of varieties. However, winter varietal forms, the fruits of which can retain their qualities for a long period of time, more than 2 months, can still not be found in so many numbers. Especially, there is practically nothing to choose from for cultivation in areas that are located above the Lipetsk or Tambov regions, since it is the late ripening varieties that need a certain amount of heat and light in order for their wood and fruits to ripen well. In regions where the summer season is short and cool, this amount may not be enough. Nevertheless, breeders have bred pear varieties that ripen in September-October days, and fruits can be stored until New Year's holidays, and maybe longer. One of these varieties is the Yakovlevskaya pear. From this material, you will learn its detailed characteristics, as well as read people's reviews about this pear. 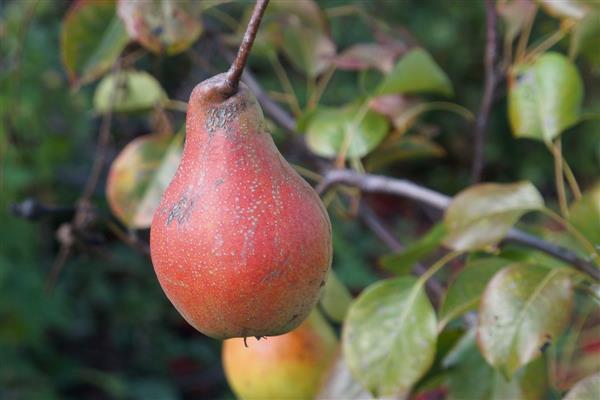 At the end of the nineties of the 20th century, breeders of the State Research Institute of Genetics and Breeding of Fruit Plants named after Michurin crossed pear varieties "Tolgarskaya Beauty" and "Daughter of Dawn", thus a whole group of hybrids was obtained: "Nika", "Miracle woman», «Extravaganza"," Yakovlevskaya ". After a lot of experimentation, all these varieties were awarded the status of different pear varieties with slightly similar, but still separate characteristics.

Pear Yakovlevskaya was bred by such breeders as: Yakovlev S.P., Chivilev V.V., Savelyev N.I., Gribanovsky A.P. Since 2002, this variety is officially listed in the state register and is recommended for cultivation in Belgorod, Voronezh, Kursk, Lipetsk, Oryol, Tambov regions.

As gardeners note, the Yakovlevskaya pear variety has perfectly adapted and pleases with rich harvests even further north, for example, in the Moscow region, in the Yaroslavl and Leningrad regions.

The tree is of medium stature. Adult Yakovlevsky pears can grow up to ten meters high, but much depends on the rootstock on which the tree is grafted. Annual growth is twenty-five to thirty cm in height, fifteen cm in breadth. The crown is quite regular, wide, in the form of a pyramid, medium dense.

Bare shoots, red-brown color, medium in thickness, grow more vertically. Leaves are of medium size, dark green in color, oblong, in the form of an oval, their surface is smooth, shiny. The edges of the leaves are serrated, in a small denticle. The base of the leaf is blunt, the leaf plate itself bends slightly upward.

The Yakovlevskaya pear variety bears fruit in a mixed manner, since the fruits are formed on all types of fruit twigs.

The Yakovlevskaya pear is almost self-fertile, but in order for the fruit to be better tied, you need to plant a pear tree of any kind nearby, but similar in flowering. And so this is not an end in itself, since in a private garden plot, the fruits that are obtained from one adult tree without pollinator assistants will be enough for the whole family, and even in abundance.

The variety begins to bear fruit rather late. The first fruits ripen only from the fifth to sixth year after planting.

Pear Yakovlevskaya belongs to the winter, but for the reason that the time of harvesting falls on September-October days, this pear can be considered an autumn species. And it is true, the technical ripeness of the fruits begins, as a rule, from the 15th of September. But often the fruit remains to gain sugar content until the October days. Then pears can acquire color and acquire juicy taste as an addition.

A characteristic feature of the Yakovlevskaya pear variety is that the fruits can be stored for a long time. Indoors, fruits can retain their properties until the New Year holidays. When creating optimal conditions for preservation, with low temperature conditions and moisture, pears will be able to survive for up to five to six months.

The yield indicator of the variety is decent. On a commercial scale, it usually reaches one hundred and seventy eight centners per hectare. From a pear ten years old, you can remove no less than forty to fifty kg of fruit.

In terms of resistance to winter, this variety occupies not quite the last position - it is higher than the average size of varieties grown in the Russian Center.

Scientists conducted tests - artificially frozen pears in winter, brought the temperature to minus thirty-eight degrees. As a result, only 1.1 points of damaged parts were recorded on the tissue of the cortex and cambium.

Plus, the Yakovlevskaya pear has a strong immunity to fungal infections, for example, to scab, a widespread disease of pome plants, as well as to entomosporiosis.

Pear Yakovlevskaya: features of the fruit 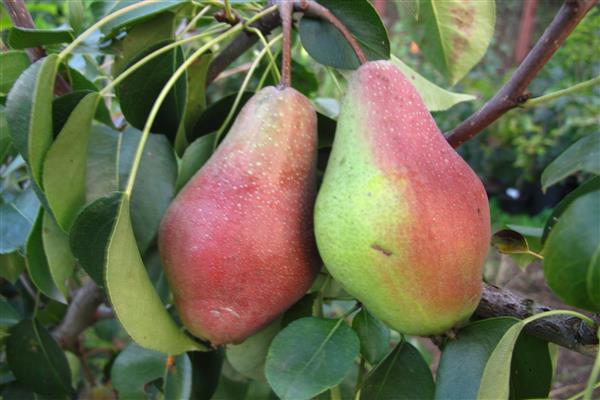 Yakovlevsky pears are very decorative - they are quite regular, oblong, in the form of a standard pear. The size is large - one fruit weighs from one hundred twenty to two hundred and ten grams.

The peel is smooth, even, medium in thickness, slightly oily, covered with a thin layer of waxy coating, designed to protect against the negative effects of the climate.

With technical ripeness, the fruits are evenly colored in green; with full ripeness, the peel is repainted in a yellowish color. The side, located on the sunny side, is covered with a pronounced reddish blush.

Fruit stems are of medium length and thickness, bending. The cup is half open, does not fall off. The dish is wide, medium depth. Onion-shaped core.

Seed chambers are closed, of medium size. Seeds are small in size, cone-shaped and brown in color.

The inner content is medium in firmness, juicy, creamy in color. Half buttery, there is little granulation. Tasting taste score - four and a half points out of five.

The fruits of the Yakovlevskaya pear variety are distinguished by delicate aromatic properties, with notes of flowers and pleasant sweet taste, slightly sour.

The fruits of this variety can be stored perfectly and for a long time, and their transportability is good.

Yakovlevski pears of universal purpose. Usually, winter varieties are loved for their safety, thanks to which you can enjoy the taste of fresh pears even in winter. Jam, jams, compotes, marmalade, marshmallow are also made from fruits. In addition, pears can be dried and made into homemade wine.

Like most high-yielding varieties, the variety we are considering has one drawback - if the crown is very dense, or a large number of fruits ripen, then they can be crushed. In this regard, the tree needs to be pruned and thinned out in a timely manner; in addition, the ovaries can be normalized after the pear has faded. 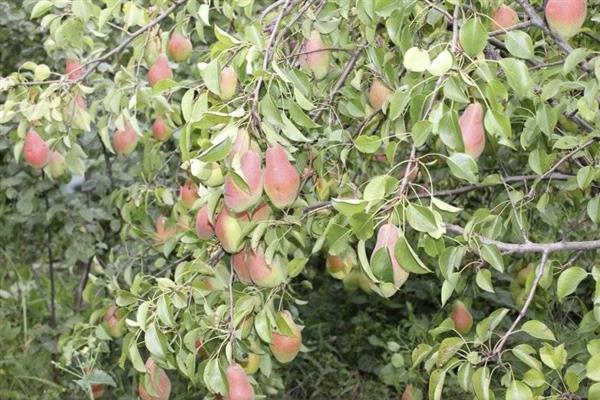 A large number of gardeners speak positively about the Yakovlevskaya pear variety.Since there are few winter varieties that grow and bear fruit well in mid-latitudes. The only negative they talk about is not the best taste of fruit, but, as we know, there is no comrade in taste and color.

Pear Yakovlevskaya will definitely delight you with juicy and tasty fruits that can be stored for a long time. You just need to be patient and wait for the tree to start bearing fruit, as this happens quite late in the day.

Petunia pests: what are there, signs of appearance, the fight against them

How to weed carrots is easy and simple, how correctly, weeding with kerosene

Top dressing of pepper after planting in the ground: TOP tips and recipes 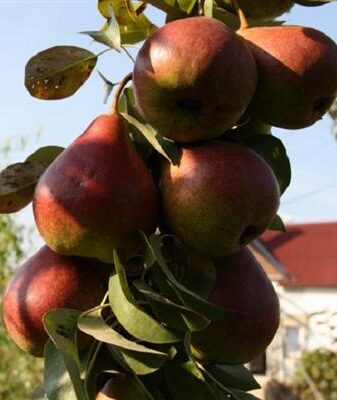 Sapphire Pear
A variety of fruit trees of low stature, which are hung with delicious fruits "from head to ... 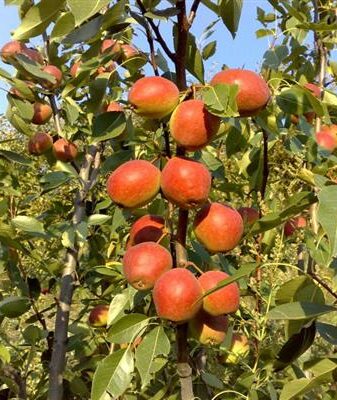 Pear Original
Pear Original is an autumn variety obtained on the basis of the Saratov Experimental Gardening Station and ... 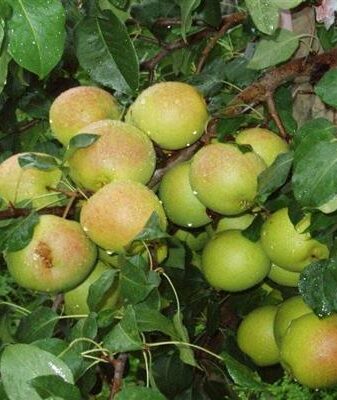 Pear Otradnenskaya
Among the large number of varieties, pay attention in appearance to not very decorative, but ...
×