Every gardener looks forward to a good harvest when caring for his plants. And in many ways, this harvest depends on how correctly you select the varieties of trees and shrubs, whether they can grow and bear fruit in your climate. Now gardeners have the opportunity to purchase a variety of plants, nurseries and garden centers offer you a huge selection of varieties of apples, pears, plums and other plants. When planting trees in the middle lane, it is very important to take into account different characteristics and especially frost resistance, since the climate here often surprises. In this article, we will consider the Veles pear, which is ideal for the middle lane and invariably pleases with the harvest in any weather. 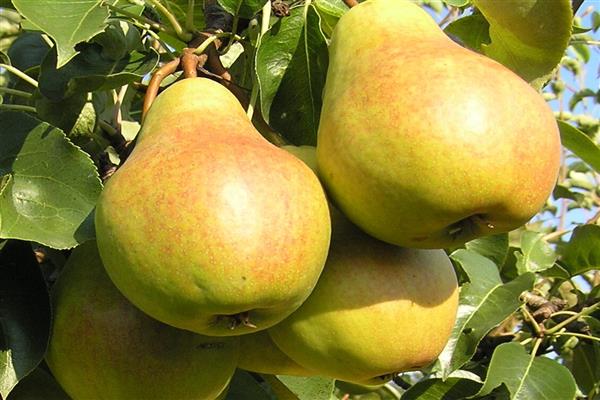 Pear Veles is a hybrid variety bred by Russian breeders. Some gardeners may know him as the "Great Daughter." The Veles pear variety is ideal for a moderately warm climate, in particular for the Moscow region, where it successfully displays all its best qualities.

As a rule, by the age of ten, the pear reaches a height of 4 meters. From the very beginning, the trees of this variety have a rather spreading crown, with the age of the branches it grows more and more and the crown acquires a spherical shape. The main branches that form the "skeleton" of the tree are thick and strong, but at the same time they bend well. Also, with age, the pear releases many basal shoots.

The shape and color of the leaves are no different from other types of pears - oblong, slightly curved leaves of a dark green color, with very small teeth at the edges and a glossy front surface.

The fruits of the Veles pear tree have a smooth skin, rather rounded than elongated, weighing 160-200 grams, respectively, they can be considered medium or even large. Harvesting is carried out at the very end of summer or at the beginning of September, at this time the fruits are yellow-green in color, but they become most tasty and juicy after the skin turns pink in places, the so-called "blush". If the fruits ripen on a tree, then immediately after harvesting they must be processed or eaten, because in this form they cannot be stored for a long time. If you plan to transport the crop, then you need to pick pears while they are green, gradually they will ripen.

The taste of the fruit is sweet with minimal acidity, the flesh is white, very juicy, slightly oily. The seeds are in the seed chambers, and the darker the seeds, the more ripe the pear is.

Veles pear is versatile from the point of view of cooking: its fruits are very tasty fresh, they are suitable for making preserves, jams, juices and compotes. They can be dried or frozen for winter use, and also, since the variety is late-ripening, stored in a cool room for 2-3 months (during storage, the pear will not lose its presentation and taste). But as we said earlier, for storage it is necessary to collect fruits that have not reached full ripeness.

The fruiting of the Veles pear will have to wait - the tree gives the first harvest in the fifth or sixth year.

Another advantage of this variety is its self-fertility - the Veles pear does not need pollinators, you can harvest even if it is the only tree in your garden. This does not mean that in the presence of other trees, the pear will not bear fruit, on the contrary, so its yield will only increase.The best companion-neighbors for this variety will be "Severyanka", "Rogneda", "Chizhovskaya" pear. 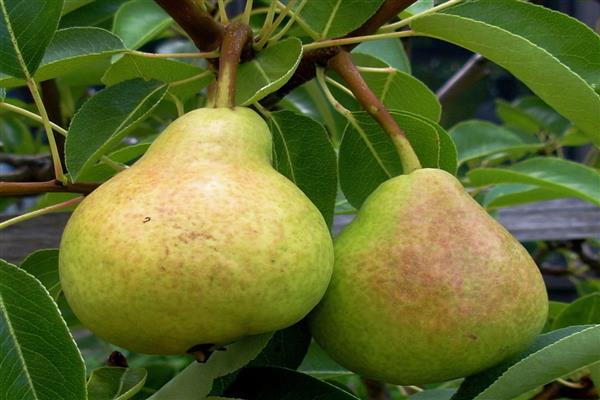 Based on the characteristics of the variety and on the opinion of gardeners, it is safe to say that the Veles pear is one of the best varieties that give good yields annually and show high resistance to various diseases and bacterial burns. Adds to this high frost resistance and we get an almost ideal pear variety for the middle lane.

Like other seedlings, the Veles pear can be planted in the spring or autumn. The planting technology does not have any features characteristic of this particular variety.
Experienced gardeners prefer to plant seedlings of fruit trees in the spring months, so that they are guaranteed to take root and grow stronger in the summer, since there is always a risk of unexpected frosts during autumn planting. In spring, the most optimal time for planting will be the third decade of April and the first and second decades of May, a time when it is already warm enough, but not yet hot. In autumn, planting work can be carried out in the first half of October.

Despite the winter hardiness declared in the description of the variety, the pear should be planted in a sunny place, which is protected from drafts and cold winds. Before planting trees, it is imperative to find out how close the groundwater is to the soil surface in your area - this factor is guaranteed to affect the health of the plants, and, accordingly, the yield. If the roots of the tree constantly get wet, then gradually this will lead to the death of the plant. Veles pear, like all fruit trees, loves light, loose and nutritious soil.

Two-year-old seedlings take root and adapt most quickly in a new place after planting, therefore it is recommended to purchase just such planting material. Take your time with the purchase, carefully inspect the seedlings: a healthy and strong plant should not have damage to the bark, the roots should be well developed and not show signs of rot or drying out.

If you are planning a spring planting of seedlings, then you need to take care of the preparation of the planting pit in the fall. If you made the decision to plant in early spring, then you can prepare the hole two or three weeks before the intended planting. A planting hole for a tree must be dug out quite voluminous, 70-80 cm in diameter and about a meter deep. In the process of preparing the pit, you can immediately separate the fertile soil from the infertile in order to facilitate your work in the future, but leave all the earth next to the pit, it will come in handy when planting a tree. You also need to immediately strengthen the support in the pit - about a one and a half meter pole, to which you will tie the planted pear in order to give it stability until it is completely rooted.

So, you have a planting pit of the desired size ready, in the center of which a stake is driven in, which will serve as a support for the seedling.

Fertile soil, which you previously separated from the infertile, must be used to prepare a nutritious soil mixture. To do this, you need to add compost and 0.2 kg of potash and phosphorus fertilizers to it, this is enough to feed the plant for the next two years. A drainage layer of broken brick, crushed stone or expanded clay is laid at the bottom of the pit, then three buckets of prepared soil mixture are poured and a seedling is placed on it, having previously shortened its roots and branches slightly with a sharp sterile pruner. Without tightly attaching the seedling with a rope to the support (just enough so that it does not fall to one side), they begin to fill the hole with the remnants of nutrient soil, and then watered. Watering will require 20-30 liters of water. After watering, the natural subsidence of the earth will occur, after which you can use part of the bad soil that remained after digging the hole and tamp the surface a little. After that, you can more reliably attach the seedling to the support.Once it is fully rooted and your pear is stable, the support can be carefully sawed off. Its underground part will decay over time and will become an additional source of nutrition for the plant.

There is another landing option. After you pour three buckets of nutrient mixture into the pit, you need to pour a couple of buckets of water there, immerse the roots of the seedling in the resulting "mud", and then proceed as described above (attach to the support, cover with earth, etc.). Both methods are equally effective, so the choice is yours.

If the soil in your area is heavy enough, then you should add two or three buckets of sand in it to achieve more looseness, since heavy soil does not allow water to pass through well and the roots of the plant can begin to rot. 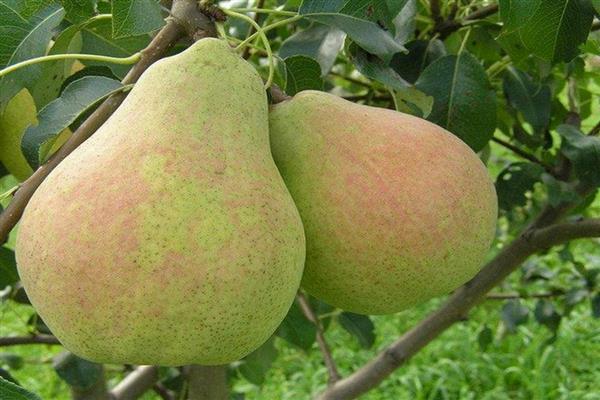 During the first two to three years after planting, the tree should be watered three times a month, this should be done early in the morning or in the evening. Mature trees are watered about five times per season. Of course, the irrigation regime must be adjusted depending on the air temperature and the amount of precipitation: in hot summers, the frequency of irrigation must be increased, and in rainy weather, it is worth abandoning watering altogether. For better moisture absorption, furrows are made around the tree trunk, into which water is poured. After all the water has been absorbed, the furrow should be buried, and at the next watering, a new one should be made, moving it a little closer to the tree trunk or, conversely, farther from it.

The tree is capable of independently forming a beautiful crown, but since in this case we do not need beauty, but a high yield, then you have to intervene in the process and carry out not only sanitary-cosmetic, but also formative pruning. If the crown is too thick, this will negatively affect the fruiting of the tree. According to the sparse-tiered scheme, an adult Veles pear should have 3 tiers of powerful main branches that make up the "skeleton" of the tree, each such tier should have five branches.

When pruning, you should cut the branch under the trunk, without leaving a "stump", and immediately lubricate the wound with garden varnish or cover with wax paper to prevent infection. Pruning should be done with very sharp and sterile garden tools.

In this section, we will give several reviews of gardeners who have long been growing this variety in their summer cottages. We have studied a lot of opinions, and it should be noted that the reviews about Veles' pear are extremely positive.

Catherine, Wedge.
We saw the first flowers on the Veles pear in the fourth year, after we planted the tree. By the end of summer, there were 5 pears on the tree, the first one was tasted in August - it turned out that when green they were not as tasty as we would like. And after the pears first turned yellow, and then the pink "barrel" appeared, their taste changed significantly. Sweet and juicy pears just like we wanted.

Victor, Maloyaroslavets.
The first flowering of the Veles pear variety was in the fourth year after planting, but there were no ovaries, but starting from the fifth year pears began to appear, so far a little, but very tasty! 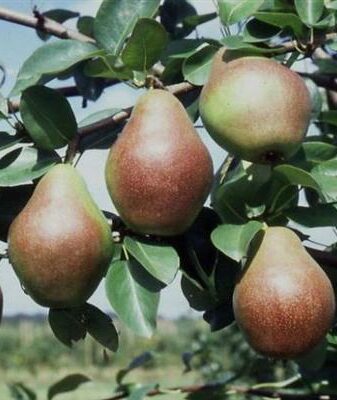 Pear Nika
At the Michurin Institute, a whole team of breeders worked on the breeding of the Nick pear variety, so ... 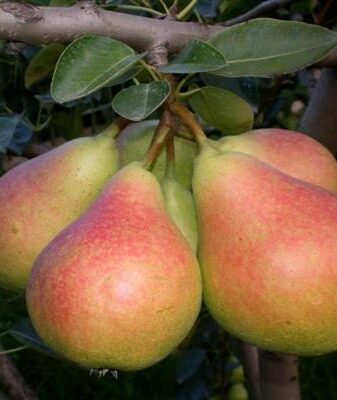 Pear Debutante
Pear Debutante refers to the summer varieties of pears. It was bred at a scientific institute that ... 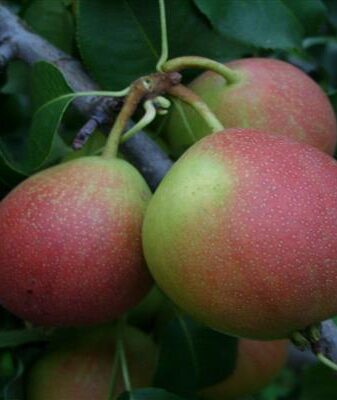