Breeders are constantly working on the creation of new varieties of pears that would have all the necessary qualities: yield, large-fruited, excellent fruit taste, winter hardiness and good immunity. Nika's pear was obtained by crossing two equally remarkable varieties - "Talgar beauty" and "Daughter of the dawn". After the tests carried out, we can confidently assert that "Niki" inherited the best qualities of its "parents", and the fruits of this pear are not only tasty and healthy, but also have a long shelf life and perfectly tolerate transportation. Next, we will tell you in more detail about Nick's pear variety, consider the strengths and weaknesses of the pear, and also tell you how to care for pears in your garden. 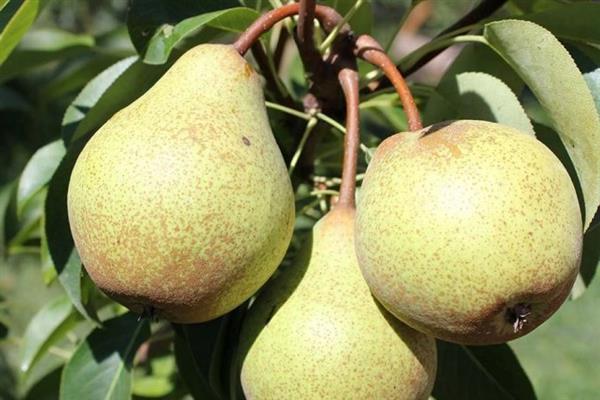 Trees of this variety have a rather neat spherical crown, plant growth does not exceed 3.5-4 meters. The main branches of the tree that form its "skeleton" depart from the trunk at an almost 90 degree angle. The bark of the trunk and branches is colored brown, oval, slightly pointed leaves are slightly curved, their surface is smooth, but there is no glossy sheen. As the tree grows, its crown becomes less dense. The pear blooms with snow-white large flowers, collected in inflorescences.

Nick's pears have the correct classic elongated "pear-shaped" shape, their average weight is 170-190 grams. When fully ripe, the green with a red “blush” color of the fruit changes to golden yellow with a dark red “blush”. The thin peel has a slight waxy coating, the fruit pulp is colored in a light cream color. The taste characteristics of the fruits are at a very high level: the texture is not grainy, the juice content is very high, the taste is sweet with a slight sourness and notes of nutmeg.

Harvesting time begins in the second or third decade of September, after which the fruits ripen for some time and become fully ready for use in one to two weeks. But even if you did not have time to pick the fruits in time and they ripened on the branch, then you do not need to worry - the fruits do not crumble, you will also collect them safely in October.

If you put part of the harvest in a dry, well-ventilated, dark room with an air temperature of 0 ... + 3 degrees, then the fruits can be stored for 3-4 months without losing their taste.

Pear Nika is considered a fast-growing one - you will try the first harvest in 4-5 years. But to achieve the best result, you need to plant other pears nearby, which will be pollinators for each other. As such, pear varieties that bloom at the same time are suitable: "Duchess", "Svetlyanka", "Rogneda».

From a culinary point of view, the fruits of the Nika pear variety are universal: they can be used for making homemade preparations, juice and homemade wine, filling for pies or pancakes, as well as for various other desserts. But still, these fruits are most useful fresh, since they contain various vitamins, trace elements and acids.

Pear trees of the Nika pear variety can boast not only good immunity and the ability to resist scab and entomosporia, but also high frost resistance: in the tests at -38 degrees, the freezing of trees was insignificant.

Choosing Nick's pear tree for his garden, every gardener dreams of getting a harvest as soon as possible, dreams that the tree will bear fruit annually, abundantly, without getting sick and without causing trouble. In all honesty, we can confidently say that there is no hassle at all, but still there are some varieties of pears that, in addition to their yield and fruit taste, can boast of unpretentiousness and good immunity.

An objective assessment of specialists and most of the gardeners' reviews of the Nika variety are positive. The undoubted advantages of this variety include the following qualities:

Some gardeners note that over time they find signs of scab on pears that have not been sick for years. Therefore, despite the declared immunity, preventive measures cannot be neglected.

The obvious disadvantages of this variety include the fact that the tree needs pollinators, as well as the need for regular pruning. Agree that after the listed advantages, these disadvantages do not seem serious at all. Nicky's need for pollinators is just an opportunity to plant another wonderful pear variety on the site, for example, Duchess. And every tree needs regular pruning if you expect to reap a decent harvest from it. 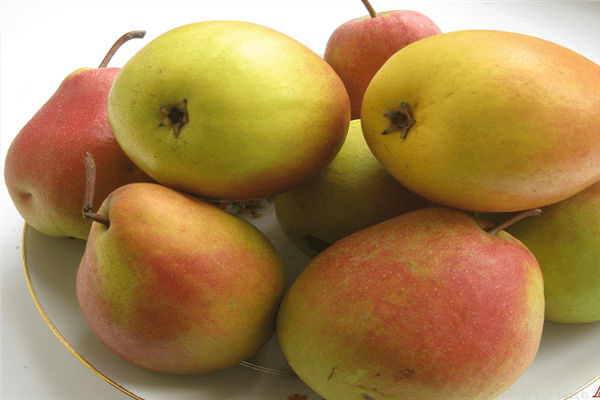 Nick's pear is very loved by novice gardeners, since caring for this tree does not require special skills.

Choose one-year or two-year-old seedlings as planting material, these plants take root the fastest. Before buying, inspect the trees: make sure that there are no mechanical damage to the branches and their elasticity, as well as the health of the root system and there are no traces of rot or drying of the roots.

When choosing a place to plant Nick's pear seedling, give preference to the sunniest part of your site. It is an axiom: the more sun, the larger and sweeter the pear. This rule especially applies to winter and late autumn varieties, because if they do not have enough sunny days to accumulate sugar, then the taste of pears may not be as sweet as you expect.

In addition to illumination, humidity must also be taken into account, namely, the depth of the groundwater. Pears do not tolerate waterlogging, so you should make sure that the roots of a mature tree do not end up in the water.

Prepare the planting pit a few weeks before the proposed work, its depth should be about a meter, and its diameter should be from 80 to 100 centimeters. Mix the fertile soil from the planting pit (topsoil) with humus or compost, add a shovel of ash and 100 g of potash fertilizer and 200 g of phosphorus fertilizer. Drive a stake into the bottom of the hole - this is the future support for your seedling, and then fill it with a few buckets of soil and, without leveling the mound, leave it until the moment of planting.

After the hole is ready and suitable seedlings are purchased, their root system should be immersed in water for two hours, and then, when the roots are saturated with moisture, move them to the planting hole, gently spreading the roots over the surface of the mound of nutrient soil. Covering the roots with earth, gently shake the tree to eliminate possible voids. Then tie the seedling to a support and water it.

In the process of watering, the soil will naturally settle, therefore, if necessary, add soil to the trunk circle. The main thing is that when planting, the root collar remains above the soil level.

After completing all work, mulch the soil of the trunk circle to prevent rapid evaporation of moisture.

If you are already a fairly experienced gardener, then you can graft the "Nika" pear cut onto an adult tree of a different variety, as they take root very well.

The concept of "unpretentiousness" does not exclude minimal tree care, which consists of watering, fertilizing, pruning and prevention.

The first time after planting, the seedlings of the Nika pear variety are watered quite often. In subsequent years, mandatory triple watering is carried out: the first watering before flowering, the second watering two to three weeks after the first, and the third (most abundant) after harvesting. In a typical summer, this watering schedule will be sufficient, but in the event of hot and dry weather, the watering schedule will undoubtedly need to be adjusted.

If you have prepared a nutritious soil mixture for the planting pit according to all the rules, then for the first three years the tree can not be fertilized. Then, every two years, humus or compost can be applied as an organic fertilizer to the near-trunk circle, and mineral fertilizers can be used to prepare solutions and carry out foliar dressing, so pears absorb nutrients more easily and faster. Nitrogen fertilizers for feeding pears can be used 1-2 times in the spring or at the very beginning of summer, the rest of the time, use potassium-phosphorus fertilizers.

It is very important to pay attention to the formative and sanitary pruning of the tree every year. The best time for such a procedure is early spring, before sap flow begins. In addition to removing dry and broken branches, as well as shoots growing deeper into the crown, all branches must also be shortened by about fifteen centimeters. This rejuvenation process helps the tree stay healthy and strong.

In the spring, before flowering begins, the Nika pear tree is treated with drugs that prevent the appearance and spread of harmful insects. Despite the declared resistance to fungal diseases, experienced gardeners recommend treating the tree with Bordeaux liquid or copper sulfate the first time before flowering, and the second time in the fall, after all the leaves have fallen off. Collecting fallen leaves, removing damaged branches and peeling bark, digging up and weeding the tree trunk circle are also very effective measures to prevent diseases and pests (all plant residues are recommended to be burned).

If you are going to grow Nick's pear in colder regions, then before the onset of winter, you should take care of the tree's insulation: cover the area of ​​the trunk circle with a thick layer of mulch, and overlay the tree trunk with spruce branches and wrap it with geotextile.

Most gardeners who have already planted and have been growing Nick's pear on their plots for several years note the unpretentiousness of this tree and very tasty fruits. Some note that the resistance to scab is gradually being lost, but with timely preventive treatments, this disease does not threaten the tree.

When deciding to plant a garden, everyone should be prepared for the fact that even the most unpretentious plant will have to look after if you expect a decent result.Taking care of Nick's pear will not require much effort from you, but it will help you gain experience, and your reward will be amazingly beautiful and tasty pears!

Autumn planting of fruit trees: how is it right? 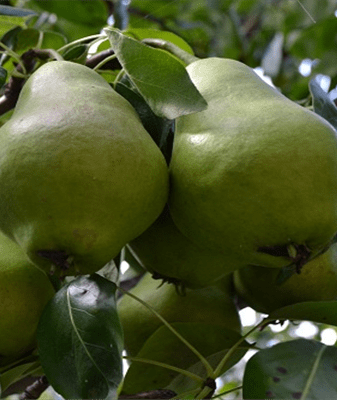 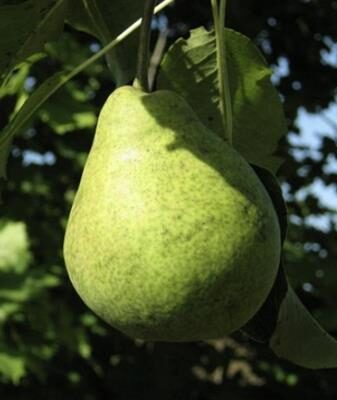 Pear Quiet Don
Russian breeders have spent a lot of time and work so that in our country, in addition to apples, ... 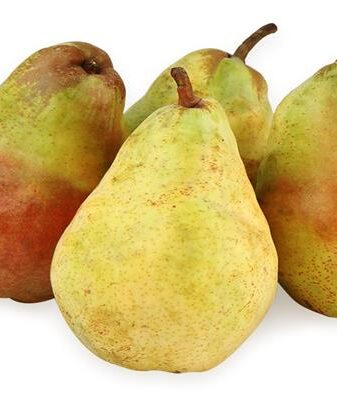