Hydrangea is the queen of the garden, which is highly valued among gardeners for the beauty of flowering and unpretentiousness of the bushes. During flowering, the plant is covered with flower brushes, which cover the plant like a gentle cloud, making the garden extraordinary. Thanks to the variety of numerous varieties, you can create various compositions that will delight from early summer to late autumn. Hydrangea paniculata Unique unique was also highly appreciated by the gardeners of our country, which is why it has become very popular. 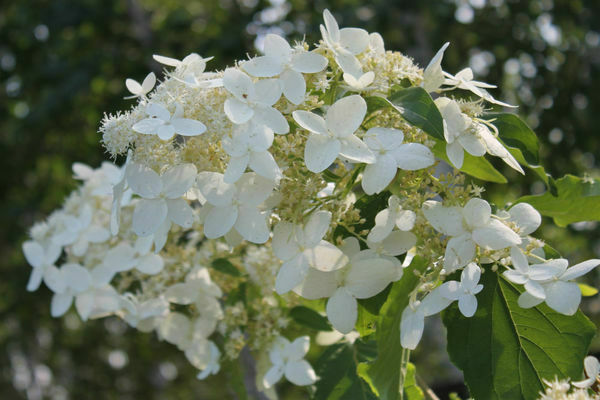 Ornamental hydrangea is very different from other plants in the uniqueness of its flowers, collected in inflorescences that resemble the shape of shields, balls or brooms. The petals are painted white, but thanks to the work of breeders, varieties have appeared whose petals can be painted in blue, pink purple and green shades, while during the flowering period they are able to change them.
Large leaves have a rich green color. Their edges can be even, serrated, slightly dissected. The veins are pronounced on the leaves.
The varieties are presented in the form of spreading shrubs, trees and vines. Origin of the plant Southeast Asia. The plant is resistant to various climatic conditions and easily takes root in almost all corners of our country. The varieties belonging to the tree-like, paniculate and large-leaved species are most suitable for growing in the northern regions. They are most resistant to cold winters with proper care and preparation. 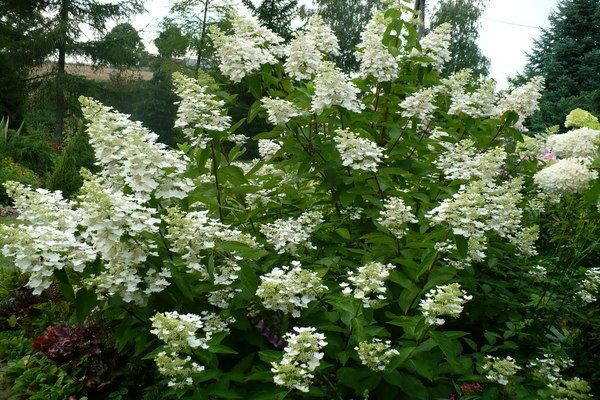 Hydrangea Unique belongs to a deciduous paniculate species, it can be found freely growing on the territory of Sakhalin. They easily live there despite the rather bizarre Far Eastern climate, so the bushes of this variety can be found in many gardens in Russia. Summer residents appreciate the Unicorn hydrangea for its unique characteristics.
In adulthood, the bush grows up to three meters in length, and the width of the crown is up to five meters. However, many growers prefer to control growth and keep it at two meters.
Flowers are collected in clusters 30 centimeters long, they form on bending shoots and decorate the garden from mid-summer to late autumn. The pink buds open up to reveal snow-white flowers that turn pink before flowering ends.
The leaves are large, their length reaches 15 centimeters, width is 8 centimeters. Their shape is ovoid, and along the edges they have notches.
During flowering, the bush emits a delicate and soft scent that is well felt next to it.

It's important to know! The flowers of the Yunika variety are sterile, so the bushes reproduce only in a vegetative way.

The roots of these shrubs are located on the surface and grow rapidly. You can use root suckers forming on fertile soil as planting material.

In 1993, the Unique hydrangea variety received the most prestigious award given by the Royal Horticultural Society, the world's premier gardening organization. Probably, this fact also influenced such a great interest in this hydrangea variety.The plant owes its appearance to breeders from Belgium, who demonstrated the result of their labors in the middle of the 19th century.

Hydrangea paniculata Unique: where to plant 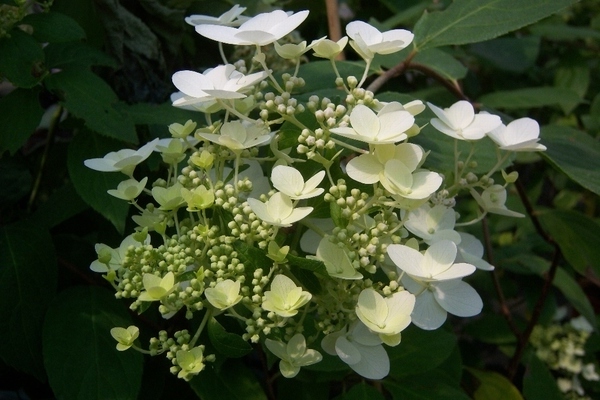 Unique panicle hydrangea prefers to grow in open sunny areas or in partial shade. The site must be protected from strong winds, due to the flexible and rather fragile shoots of the plant, and from drafts. The soil loves fertile, moisture-consuming, well-drained, neutral or low acidity. Hydrangeas can only grow well in moist soil, but they don't like stagnant water.
This variety cannot be planted in beds with other flowers that require loosening, due to the thin superficial roots that can be damaged during such events.

Hydrangea seedlings Unique are grown through layering, dividing the bush or by cuttings.
Next, the seedlings are planted in pre-prepared planting holes. They should go 50 centimeters deep into the ground, and should be about 70 centimeters in diameter. The hole is watered abundantly, and a drainage layer of 15 centimeters is laid out on the bottom. To prepare the soil mixture, which will fill the plant, you will need: humus, garden soil, peat and sand. All this is mixed in equal proportions. Add 25 grams to this place. urea, potassium - 25 gr. and 60 gr. phosphate. Mix well and leave.
As soon as the time for planting comes, you need to get young bushes and plant them in the planting holes along with an earthen lump so that they stand in the center. Further, it is filled with prepared earth in layers and compacted without leaving air gaps.
If the seedlings have an open root system, then before planting it is necessary to inspect it, remove all parts with signs of disease or sluggish ones and shorten the rest by a couple of centimeters. Next, you need to carefully spread the roots and place them on a mound made at the bottom of the hole.
When covering the plant with earth, it is important to ensure that the root collar remains at ground level.
After planting, the plant is watered abundantly, and the soil is covered with a layer of mulch from leaf humus and needles. 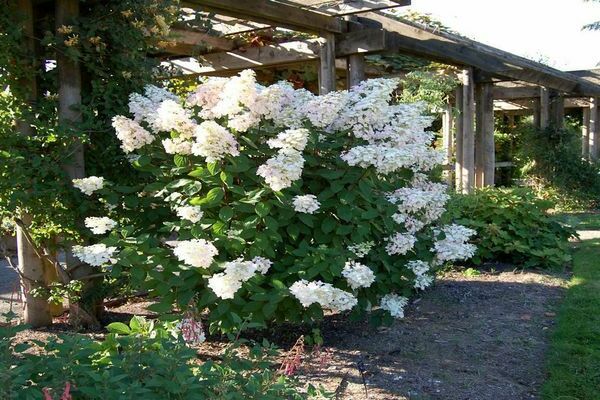 The variety of panicle hydrangea Unique is not picky about care. The whole process is pretty simple and doesn't take a lot of time.
Young plants should be watered at least once every 7 days, so that their adaptation to new conditions is better and faster. Then they can be watered once every 21 days with plenty of water. In case of extreme heat, it is necessary to spray the leaves with warm water. For irrigation and spraying, rain or settled water is used.
Loosening is carried out twice a season, very carefully so as not to damage the root system located very close to the surface. In order to preserve moisture in the soil as long as possible, reduce the growth of weeds and give the plant additional nutrition, after watering, it is necessary to mulch it with peat or needles.

Top dressing is carried out three times a season. First time in early spring, before buds begin to form. Nitrogen based fertilizers work well here. It promotes the growth of green mass. The second is carried out before flowering using fertilizers with potassium and phosphorus. The same fertilizers are applied during the third feeding, which is carried out in the fall.
To protect the plants from root rot, it is necessary to water them with a light solution of manganese once a season. The base of the bush is watered with it.

Pruning is carried out in early spring, before vegetative growth begins, and the climate in the growing region must also be taken into account. We must wait until the threat of frost completely disappears. However, postponing this procedure for a long time is also dangerous, as it can negatively affect flowering.
In the spring, all frozen twigs, damaged or thickening shoots are removed from the plant.The shoots on which the flower brushes of the previous year are located must be cut to the last healthy bud, the new ones are shortened by 1/3, the weak, improperly growing and thickening ones are cut off to the very base.
If rejuvenating pruning is carried out, then all branches are cut at the root, leaving only the stump.
During autumn pruning, all flower stalks must be removed, as they will break branches in winter, which will be covered with snow anyway.

Since this variety is highly resistant to frost, it will be quite easy to prepare it for the winter period. If the plant is planted in the southern regions, then it is enough just to huddle the bush near the base. If the middle strip is, then a layer of mulch of 12 centimeters should be applied around the trunk. For this, peat, needles and fallen dry leaves are suitable. If Unic grows in the northern regions of the country, then you need to carefully tilt the branches to the ground, fix them and cover them with insulation made of breathable materials. 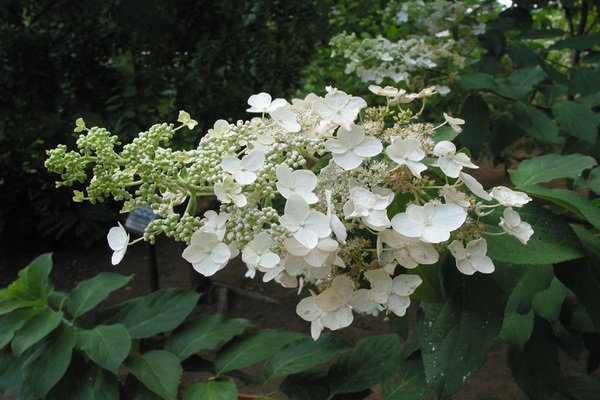 Hydrangea diseases can be different. They can be associated with poor nutrition, poor metabolism, and can be caused by a fungus or virus.
If the plant does not receive enough trace elements, it can suffer from chlorosis. You can identify it by the color of the leaves. The saturated green color becomes pale or takes on a yellow tint. Special dressing with a complex of microelements will help to cure the plants.
The fungus can infect the plant if pruning is not carried out in a timely manner. Fungal diseases, to which bushes are prone, include: gray rot, white rot, powdery mildew. If these diseases are detected, it is necessary to immediately carry out the treatment with the help of fungicides, copper sulfate and Bordeaux liquid.

When processing fruit trees and shrubs in the spring, it is necessary to process hydrangea bushes, because it is better to carry out prevention than to treat the plant.

You can also encounter a viral disease, ring spot. It is impossible to cure it. If found, the plant is removed as quickly as possible and burned.

Cultivating the Unicorn panicle hydrangea, you can encounter snails, aphids, rootworm nematodes, spider mites. Snails are collected by hand so as not to harm the inhabitants of the garden, including ourselves. You can defeat aphids and spider mites with the help of insecticides, you can also scare them away with wormwood, tansy and garlic infusions.
It is very difficult to notice the appearance of nematodes, which complicates the fight against them. Most often they are found when the bush dies. As a preventive measure, it is necessary to process the bushes and roots of seedlings using copper sulfate.

The use of Unicorn hydrangea in garden landscaping

The Unicorn hydrangea is a luxurious shrub plant that will look great in any garden. They can be planted as a single plant so that you can see the beauty of the bush, you can use them to create a hedge or plant them next to coniferous bushes, where they will look great. Perennial aster, garden fern, host, all of them can become excellent neighbors of a beautiful hydrangea.

If properly cared for, the Unicorn hydrangea will delight you with its flowering and aroma for many years. It is not difficult to care for and plant, which may appeal to novice gardeners.

Why apples rot on an apple tree: TOP causes and treatment of rot with a photo

Growing dill: important tips for planting and caring for a photo 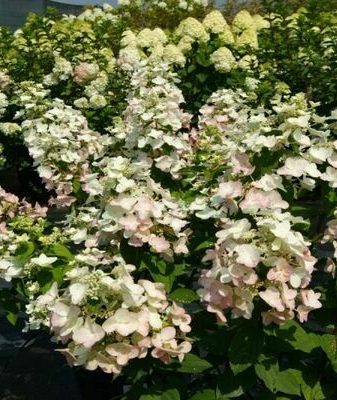 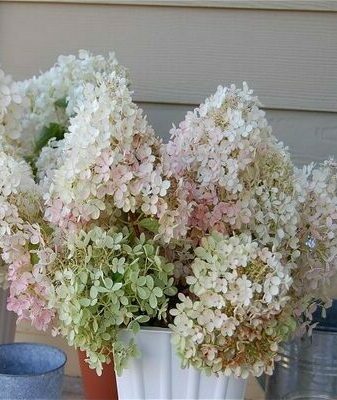 Hydrangea Dolly - description, planting and care
Hydrangea is a shrub plant named after a beautiful Roman princess. IN... 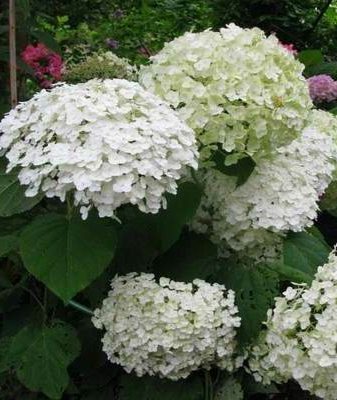 Hydrangea Incredible tree - description, planting and care
Gardeners at all times loved plants that bloom magnificently, because they are able to decorate and make ...
×