Gynura - belongs to the Asteraceae family. Today, there are about 100 species in nature. In its natural habitat, it can be found on the African continent and Asian countries. Translated from Greek, the name means a woman with a tail, probably the name was given to the plant by its long lashes. As an ornamental plant in homes, only a few of all existing species are grown. 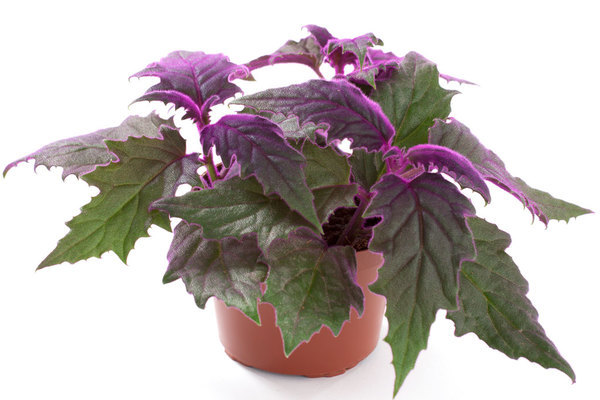 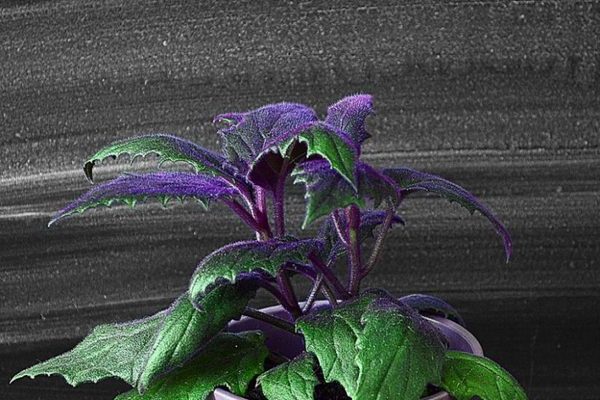 Ginura is a herbaceous or shrubby perennial evergreen. The length of its climbing shoots can reach one meter. Its root system is fibrous and sometimes tuberous. Some shoots have pubescence, and some grow naked and after a while begin to lignify. The leaves are simple, some are attached to the branches with the help of petioles, while others are completely absent, they are thin or, on the contrary, have fleshiness, have a smooth surface or pubescence, be located on the stems or gather in rosettes. They are located on the branches alternately. Some species have purple leaves on the inside. The forms of the leaves in the species are also different, they can be elongated, oblong lanceolate, resembling the shape of an egg, deltoid or dissected.

The edge of the leaves is covered with large or small denticles. Flowers of orange, red, yellow, purple color, are collected in terminal or axillary inflorescences in paniculate form or in the form of a shield. There are specimens that produce single flowers.

In their natural habitat, these beauties bloom all year round, and they demonstrate special splendor from the beginning of winter to the beginning of summer.They emit a not very pleasant aroma, which is the reason for the removal of flowers before they open for most of the growers.

For growing at home, varieties of wicker, orange, rising and hybrid variegated are used. Ginura is a plant that grows and develops very quickly, some are used as an ampelous plant. When deciding to grow ginura, it is important to remember about the poison content in it, which means that you need to use precautions for caring for it. It is also important that children and pets do not have access to this plant.

Ginura: photo, rules of care when growing in the house 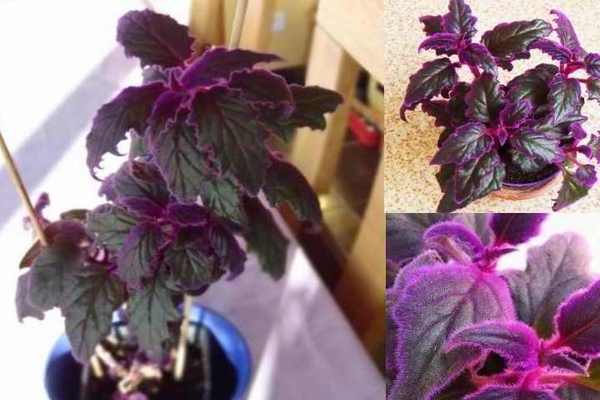 Ginura growing in the house needs a lot of bright light, with a lack of lighting, the leaves will become less bright. The ideal option would be a window located on the south or west side of the house, but in the summer in the middle of the day it is necessary to protect the plants from direct sunlight. Since there is very little sunlight in winter, artificial lighting, such as fluorescent lamps, must be used.

Ginura loves loose, moderately acidic, well-water and breathable soils. In order to make a suitable earthen mixture, you need to take humus, leafy soil, turf and river sand, mixing everything in a proportion of 2x2x2x1. In such a land, the plant will feel comfortable.

During the spring-summer period, the best temperature for creating good conditions will be from +18 to +24 degrees. If it is not possible to give the plant the required amount of light in winter, the plant must be transferred to a room where the thermometer will not fall below +12 and will not rise above +14 degrees. In such conditions, the ginura will be able to enjoy the rest. If the lighting is sufficient, then the plant can be left in the same place.

During the period of active wakefulness, home ginura needs abundant watering. Watering activities are carried out after the top layer of the earthen mixture has dried. If wintering takes place at low temperatures, then chaff should take place less often so that the water does not stagnate and various putrefactive diseases do not develop on the roots that can lead to the death of the plant. If artificial lighting is used and the plant is at the same temperature as in summer, then watering should remain the same. Plants can be watered exclusively with water that has settled for at least a day, and during the procedure, moisture should be avoided on the foliage.

For good development, there is no need to create any conditions, since the plant is comfortable at any level of moisture in the room. If heating devices are actively used, it is better to humidify the air by putting wet small stones on a tray under the pot. Spraying foliage using a spray bottle should not be done, this may have a bad effect on the decorativeness of the plant.

With the onset of the spring season, the ginurs must be cut off, giving the bush a neat look and showiness. Pruning contributes to the lushness of the bush and stimulates its growth. This is not difficult to do, it is enough to pinch the upper shoots.

When a plant is actively growing and developing, it needs support with feeding. They are brought in during the period from March to August at intervals of 14 days. For feeding, you will need complex mineral fertilizers. When the plant is resting, no fertilization is needed.

The transplant is carried out in the spring, if necessary. Since over the years the spectacular purple color on the leaves begins to fade, it is necessary to carry out rejuvenating transplants to adult bushes. This can be done no more than once every 2 years.

In order to propagate ginur, it is necessary to use the grafting method, since this is very quick and easy to do. In the spring or summer, you need to cut off the top of the cutting with 2 internodes and lower it into the water. After a couple of weeks, the cuttings will have roots and can be planted in a pot.

Ginura has a strong immune system that easily copes with diseases and resists harmful insects. A plant can become sick and attacked by pests if it is poorly cared for and kept in conditions that are not suitable for it. In this case, Ginura will weaken and the scale insect, white-winged, aphids, spider mites and mealy bugs can settle on it.

Shields, these are small sucking insects that suck all the juices from the flower. Due to their fault, the foliage turns yellow and falls off in a short time. The bush stops developing and begins to lag far behind its "brothers", then it dries up and dies. You can cope with the disease by treating the plant with insecticidal preparations in time. If once is not enough, then re-processing is carried out after 7 days.

Whiteflies, these are small white moth-like moths laying their eggs on the leaves. Insecticidal preparations will help to cope with these harmful insects.

Mealybug, it is also called a hairy louse. Small insect sucking juices from leaves. After them, you can see whitish spots similar to wax. Where this pest settles, development slows down. There are also such species that affect the root system and then the disease can only be detected by developmental lag. An insecticide will help to cope with them.

Spider mite- this small harmful insect is capable of causing a lot of harm to all plants except aquatic ones. It is a sucking insect along with scale insects and scale insects. They are very small and it is almost impossible to see them without using a magnifying glass. But you can understand that they can be on the plant on the seamy side of the leaves. If there are whitish blotches on it and the thinnest cobweb is present, then there is a tick on the plant. They are capable of causing great harm, as they often carry dangerous viral diseases that cannot be cured. Therefore, if they are detected, it is necessary to immediately start treating the plant with insecticidal preparations.

Aphids you can find it on plants quite often, since it does not disdain practically any types of crops. This insect sucks sap from plants and is capable of infecting them with dangerous diseases. It can also be dealt with with preparations based on insecticides.

In houses, flower growers grow only a part of the species of this plant, there are those that are most popular, for example:

What properties does Ginura flower have and various beliefs?

In their natural habitat, you can find species that have healing properties. These qualities have become known for many years. For example, ginura pinnate is considered a very valuable and rare medicinal flower. The cultivation of this species on an industrial scale occurs only on the territory of the Republic of China. The use of this species for medical purposes is very wide. It is prized for the content of volatile oils, triterpene saponins, polysaccharide, bioflavonoids, amino acids and a large number of trace elements.

Ginura prostrate is also referred to as plants with medicinal properties. In its natural habitat, it is found on the American continent and in Asian countries such as China and Japan. There is a belief that eating this plant on a regular basis leads to the fact that no diseases will threaten a person. This plant increases energy, improves metabolic processes in the body, lowers blood pressure and sugar levels, promotes fat burning, improves kidney function, cleanses the blood and lowers cholesterol levels in the liver. Taking in food just a couple of leaves of this plant in the morning on an empty stomach, then after a couple of months you can feel how the body has grown stronger. Leaves of this variety can be added to salads.

The popular name for this plant is crocodile. Due to its not too pleasant aroma, it belongs to the sign of Scorpio. However, herbalists claim that this flower brings many benefits, as it expels negative energy from the house, and also copes with various phobias and terrible dreams. There is also an opinion that delicate leaves can affect the rough character, softening it, and also make the voice softer. Also, such a flower can protect people who quickly fall in love from rash steps. For this reason, it is advisable to leave the buds and place the plants in the shade for all these properties to manifest. There is also a belief that if a ginura appears in a house, then a woman living in it will acquire her happiness.