Blackberry Ebony is one of the best blackberry varieties of our time. It has the advantages of recommending this species for growing in hobby garden plots. A high yield rate and excellent taste allow this to be done. However, there are also disadvantages, you need to know about them in order to neutralize them with competent care.

Blackberry variety Ebony is a variety of early ripeness, it was bred by scientists from America. The United States occupies a leading position both in the consumption of berries and in the selection of promising new varieties. So, the Ebony blackberry variety is considered one of them. Shoots are strong, vertical. Therefore, the bush is compact, although its whips are very long.

Fruits ripen earlier than most other varieties: in the southern regions - on June days, in mid-latitudes - on July dates. As a rule, early maturing varieties do not have good sugar content, however, the variety we are considering is an exception to the rule. The fruits are sweet, fragrant, large. The size of the berries is about two cm in diameter, they are not very elongated, slightly round, with a glossy effect.

The variety is recommended for cultivation on an industrial scale, because the place where the fruits are torn off remains dry, the berries are the same in size, the fruits lie well and are transported.

These properties are also advantages when cultivating blackberries in private garden plots. The plant will be convenient for summer residents who visit their territories only on weekends, the fruits do not fall off, the berries do not flow, they will reach the house well and retain their qualities completely.

The fruit contains a large amount of dry matter. Like all blackberries, the Ebony variety is enriched with vitamins A, K, potassium and other microelements. The yield indicator also deserves attention - ten to fifteen kg can be harvested from a bush when growing blackberries on an industrial scale.

Many people know that the main disadvantage, due to which most gardeners do not want to cultivate blackberry bushes, is the presence of thorns. Since when it comes time to care for the blackberry and then pick the fruit, the bush causes a lot of scratches, and not only to the hands. The main advantage of the Ebony blackberry is the absence of thorns.

Shoots are erect, vertical, so it is much easier to cut and form bushes. However, at the same time, due to strong shoots and a large harvest, the bushes need to be systematically watered and fed. The plant must be carefully looked after, then it will delight you with a generous harvest of delicious blackberries.

Another advantage is that the fruits are well transported. Like all commercially grown varieties, Ebony will not turn into mush in transit. When cultivated in private garden plots, this advantage is also considered to be in demand. The variety is ideal for beginner gardeners: early maturing, without thorns, the fruit tastes sweet.

The disadvantage of this variety is that the bushes need shelter for the winter season. But private gardeners can rejoice - it's not so long to prepare for frosty periods. But for commercial farms and households, this is a laborious task. But the absence of thorns, a decent yield indicator, and early ripening compensate for this disadvantage.

If you plant the plants correctly, then thanks to this they will quickly take root and will actively grow. When properly planted, the shrub will delight you with the first harvest for next season.If mistakes were made during planting, then they will have a strong impact on yield.

In the north and middle latitudes, the bushes are planted in the spring season, and in the south - in the autumn season. At this time, the plants will take root better, take root successfully and get stronger before the frosty days.

Bushes are planted in an area illuminated by the sun, protected from the wind from the north. The soil should be neutral (the best pH is five and a half to six and a half), be loose and well flavored with nutrients, because the shrub on one site will grow for about ten years.

It is not recommended to plant a blackberry bush in the place of a raspberry one, otherwise it will get diseases and harmful insects, because they are the same for these plants.

Before planting, pits for planting or trenches are prepared in advance. The size of the pit is 50x50x50 cm. Each pit is filled with humus or compost fertilizer, superphosphate (two handfuls) and wood ash (0.5 l cans) are added. The elements are mixed with the soil, a seedling is installed on the substrate, the root collar is deepened two to three cm.After planting, watering is carried out - five to seven liters of water per bush, then the soil is mulched with straw, peat, fallen leaves or humus. A layer of mulch in summer will be a protective barrier of soil from drying out, and in winter it will protect the root system from freezing.

Already at planting, plan how you will install the trellis. In the most frequent cases, in private garden plots, a simple construction of a single-plane support is used, which is a pipe two to two and a half meters long, driven in at a distance of four to six meters from each other. Three rows of wire need to be pulled between the pipes. The lower row is at a height of forty to fifty cm from the ground, the upper one is along the upper part of the support, the middle one is at the same distance between 1 and 3 rows. 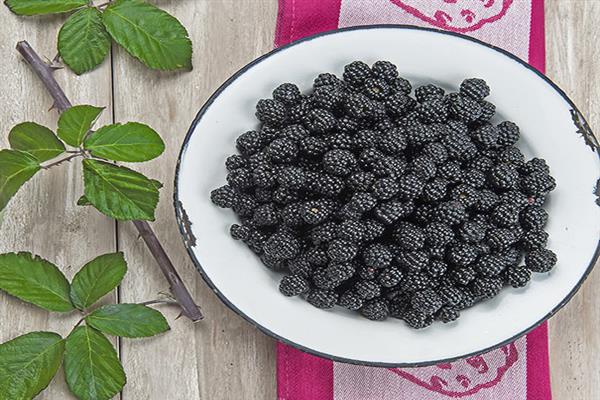 Cultivation of the Ebony blackberry variety, like most other varieties of our time, requires attention to the fact that it is necessary to feed the shrubs in a timely manner. Large fruits and a decent harvest are whimsical to fertilizing.

Blackberry Ebony is a moisture-loving culture, but the liquid should not stagnate, since the plant responds poorly to this. The root system is located at the soil surface, therefore it is forbidden to swamp the site. Watering is required when the bush is blooming, the fruits are tied, or there is a prolonged heat and dry period.

It is necessary to prune the bush of the Ebony blackberry variety in the same way as other blackberry and raspberry varieties that do not bear fruit again. It is required to remember that only shoots bear fruit for two years. Do not mindlessly prune all the shoots every year, as in cultivating species that bear fruit twice. Only those branches that have already yielded are cut off. They are cut out for a tree stump and burned. In addition, dry lashes, diseased branches and branches affected by harmful insects are cut off.

A shrub needs to be formed every year. Powerful shoots that have grown up to two meters are slightly pruned to make it comfortable to harvest. This procedure has only a beneficial effect on the yield, since the growth of lateral branches that give berries is stimulated. In addition, weak lashes, slow-growing, are cut out, because they take away strength from the bush. In order for the bush to fully ripen, eight to nine shoots are left.

Ebony blackberries are fed every year. In the spring season, before the bush begins to bloom, nitrogen is introduced to stimulate active green mass collection. From organic matter, mullein, chicken droppings are used, and urea is used from minerals. In the first summer month, when the plant blooms, it is fed with ash and a complex of fertilizers, for example, ammophos. In the last summer days or in the autumn season, top dressing is applied containing a large amount of potassium and phosphorus.

As a preventive measure, you need to plant Ebony blackberries in rare rows, cut off the bushes in a timely manner and burn old branches. In the spring season, before the buds bloom, the plant is sprayed with Fitoverm, however, the procedure is performed if you noticed harmful insects last year.

How to prepare a shrub for the winter season.

Ebony blackberries need to be covered for the winter. The vertical shoots are gradually bent to the ground to avoid breakage. The tops of the lashes are tied into a bundle, and a weight is tied to them to ensure a gradual tilt. Typically, this procedure takes two to three weeks. Before frosty days, the shrub is covered with agrofibre; in winter, you need to make sure that the area where the blackberry grows is in the snow.

Ebony blackberries are usually propagated by root shoots or cuttings (semi-lignified cuttings are taken). It is also easy to spread the variety by rooting the tops of the stems. For this purpose, the shoot is laid on the ground, pinned, at a height of twenty-twenty-five cm from the top, it is covered with soil four to five cm.Over time, roots grow back on the underground part of the stem, then it is separated from the parent plant along with an earthen lump and transplanted to new site.

“Chasing the best blackberry varieties, it’s not so easy to stop, of course. However, I initially liked the Ebony blackberry variety because it does not have thorns, and the bush is compact. I do not like the blackberry, which spreads, because it, like a pumpkin, wants to grow throughout the space that surrounds it, and you just try to have time to direct it along the support. And suddenly there is no support, then you have to shout "help". But the Ebony variety grows upright like a raspberry. The harvest is also very happy. It tolerates the winter perfectly, I cover the bush with 2 layers of spunbond. "

Blackberry Ebony is a very promising variety for the middle Russian latitudes, and especially for the southern regions. You will definitely not achieve this yield in old-fashioned varieties. In addition, the Ebony blackberry is also thornless, and the fruits are perfectly transported.

Basil in the garden: growing rules! 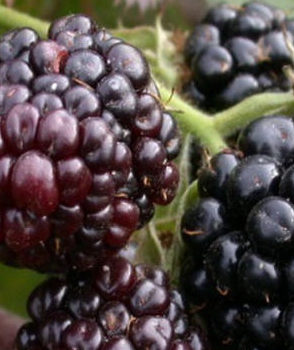 Blackberry triple crown
Blackberries are less common in home gardens as they are a new crop .... 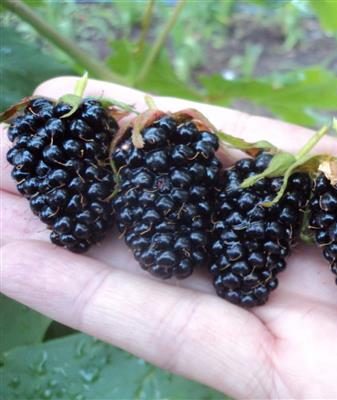