Eukomis (Eucomis) is a monocotyledonous flowering bulbous plant, consisting in the asparagus family. In its natural habitat, it grows in the southern part of the African continent. The name is translated from Greek as beautiful-haired. It was obtained thanks to Charles Louis Leritie de Brutel at the end of the 18th century. This genus unites about 14 species, but only four are used for cultivation by gardeners.

Eukomis attracts attention with its weight decorativeness, despite the periodic absence of flowering.

Eukomis: photo of a flower

Eukomis is a herbaceous perennial. The diameter of its oval-shaped bulbs is about 8 centimeters. At the very base, a multitude of belt-shaped or egg-shaped leaves with a glossy surface are formed. The flower-bearing shoots, resembling the shape of a cylinder, reach a meter in length. On them, the formation of inflorescences-brushes, reminiscent of the appearance of a pineapple 30 centimeters in length, takes place. They are collected from spike-shaped flowers of a shade of green or brown, they can also be snow-white or purple. They are composed of lanceolate perianths of 6 lobes, the base of which grows together, and fused stamens of 6 pieces with swinging anthers. The flowering shoot at its top produces a bunch of 10-20 bracts consisting of green bracts, due to which they are similar to pineapple. The fruits are in the shape of a flat rounded box with three ribs. They contain round or egg-like seeds that are dyed dark brown or black.

Planting eukomis in the open ground is carried out only if the ground is well warmed up and there is no longer any need to be afraid of the return of frost, usually this happens in the last days of May or early June. In areas where the spring lasts a long time and is rather cold, it will be better to let the bulbs release their bores in deep containers filled with an earthen mixture and transplant them already grown into the garden in the last days of March or April. Using this method, when planting, it is important to remember that the bulb should go only 2/3 deep into the ground, and the top should remain on the surface.

How to plant Eukomis in open ground:

Planting Eukomis in open ground should take place in an area with good illumination and closed from drafts and winds. This flower loves light, loose, well-drained, nutrient-rich, well-water and breathable soils. To improve the moisture capacity of the soil, you need to dig it up, bringing in some ceramic shards or crushed stone.

The holes should be at a distance of 15 centimeters along the row, and the row spacing of 30 centimeters and go to a depth of 2.5 or 3.5 centimeters, this will depend on the size of the planting material.

How to water and fertilize:

At the first stage, after carrying out planting measures in a container or in a garden, watering should be very scarce. As soon as the Eukomis flower begins to develop intensively and gain in growth, it is important to carry out watering activities regularly and using a large amount of water. After the end of irrigation or rains, it is necessary to loosen the ground, removing all weeds. As soon as Eukomis fades, watering should be reduced, after the leaves turn yellow, stop altogether.

In order for Eukomis to please with the splendor of its flowering for a long time, it is necessary to carry out top dressing with a break of a couple of weeks.For this, mineral fertilizers dissolved in water are suitable, with a low nitrogen content in the composition, because this type of flower does not like this element.

It is not difficult to cultivate an Eukomis flower on your personal plot, the only thing that is important to know is that the plant will have to be transplanted annually from place to place, not only if it grows in the garden, but also if it grows in a container. This is due to the fact that Eukomis has a low resistance to winter cold. Before the start of frost, it is necessary to remove the bulbs and put them in a warm place, and plant them again with the onset of spring.

Eukomis: photo of a flower

For reproduction of Eukomis, the vegetative method is also suitable through sowing seeds. When multiplying in the first way, all characteristics of the variety belonging to the plant from which the material was taken will be preserved. During the growth of the plant, every year small numbers of babies appear on it, which are separated when the plant ends the active growing season. In order to cut off the children, you must use sharp and clean tools, and then treat the wounds with crushed coal. New bulbs are planted in the garden in the last days of spring or in early June.

Reproduction with the help of seeds is possible only for the species eukomis, for this you can use only those seeds that have just been harvested.

Sowing takes place in containers filled with earthen mixture. The first shoots can be expected to appear in 30 or 45 days. During this period, the plant must be looked after in the same way as any other. It will be possible to enjoy the flowering of plants propagated in this way for the 4th year of life, after the sowing has been carried out.

Eukomis flower can be propagated by leaf cuttings. For everything to work out, you need to take a leaf growing at the very base, divide it in parts with a sharp and clean knife (each 5 centimeters long), and marks should be made on them where the bottom is and where the top is. Next, you need to plant the leaves in the earthen mixture 2.5 centimeters deep, leaving the top just above the surface of the earth. To make a suitable earthen mixture, you need to mix peat and sand in equal proportions. Next, you need to cover the planting with a film and leave them at 20 degrees temperature. Airing should be carried out weekly, lifting the film and leaving the plant like that for some time. After a couple of months or a little more, the formation of bulbs will begin, which are torn off and planted in a pre-prepared place for growing.

As soon as the flowering ends, it is necessary to trim the flower arrows, leaving all the leaves that deliver the necessary nutrition to Eukomis before the onset of the autumn period. With the arrival of autumn, the leaves begin to acquire golden yellow colors and gradually begin to fade, and then die off. At the same moment, the active growing season ends in the bulbs and dormancy begins. If the Eukomis flower is grown in regions with winter temperatures above 0, then you can not remove the bulbs from their land, covering them with pine branches or hay. As for other regions, there already at the end of the first autumn month it is necessary to dig up the bulbs, clean them of the remnants of the earth and place them in a fungicide for a period of time. Then let it dry well, put it in burlap or paper bags and send it to be stored in a cool, low-humidity and well-ventilated room. With a small amount of planting material, it can be sent to be stored in the refrigerator in the vegetable department, but in no case should it be placed next to the apples. You can also plant them in separate pots, provide them with room temperature and occasionally water them in small quantities without letting the earthen mixture dry out.

Bulb rot is the most common problem you can face.This is due to the stagnation of liquid in the ground, when the plant is actively growing and developing. It can also be stored in unsuitable conditions. In case of illness, it is necessary to treat the plant or bulbs with a fungicide as soon as possible. Plants often need to be treated twice or thrice by pickling the bulbs or wiping the foliage.

Mealybugs, aphids, spider mites and whitefly are the most common harmful insects found on the plant. Aphids can be found on a plant, regardless of whether the flower is grown at home or in the garden. As for the rest, they attack exclusively the specimens growing in the house. To deal with these insects, it is necessary to use insecticides with acaricides.

As mentioned above, gardeners use only some types of Eukomis for growing, namely: 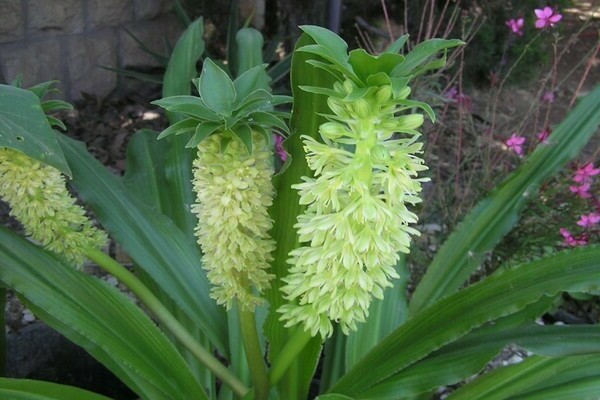 Crested Eukomis: photo of a flower 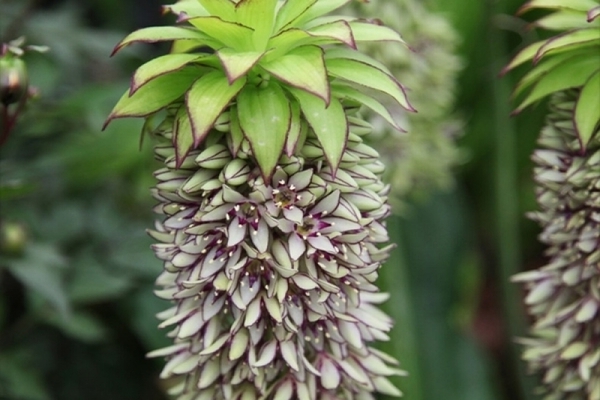 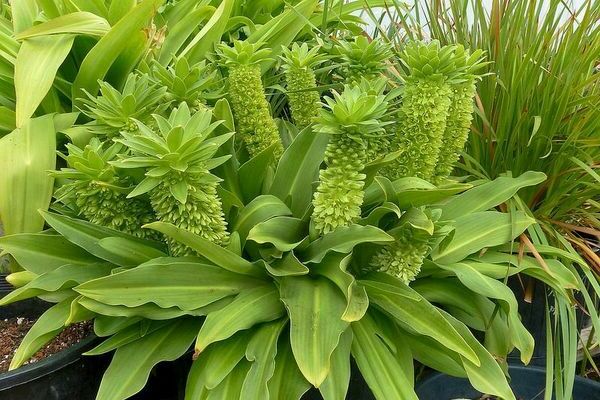 In the gardens, you can also find the varieties of Eukomis Zambezia, Pole-Evans, red-stemmed and wavy, but this happens much less often than those indicated above.

Eukomis plant in the garden

With the help of the Eukomis flower, you can decorate any garden area, making it incredibly attractive. A single flower will look great thanks to its strong flowering shoots and structural shape. In joint plantings, it will look no less impressive, and as neighbors, you can choose an annual gerbera or a coniferous perennial. Heuchera with Eukomis will look great if the background for them is Lobelia or Alyssum. The stone garden will be magnificent with a cover of glistening Eukomis leaves. No matter where the Eukomis flower is planted, it can become an excellent decoration. 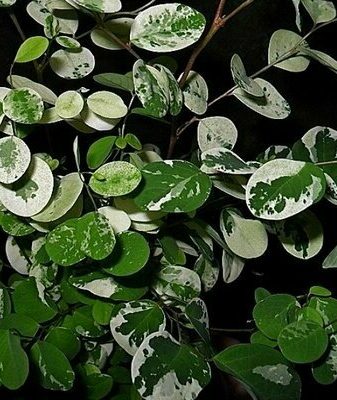 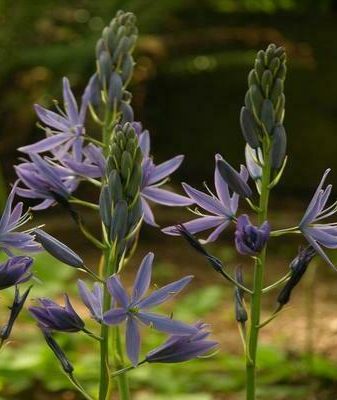 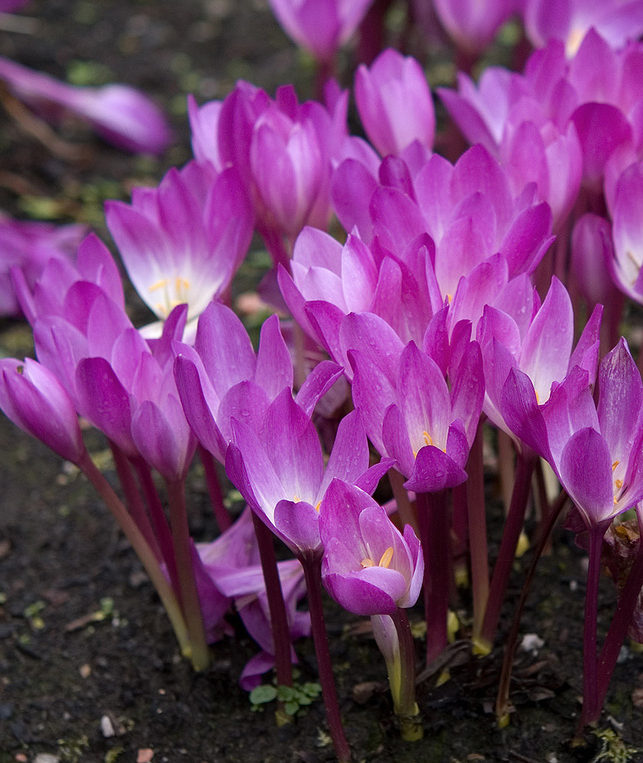