Dicentra (Dicentra) - herbaceous annual and perennial plant, belongs to the subfamily Dymyankovye, family Poppy. This vegetation is known to many for its original heart-shaped flowers. In France, the flower is called Jeanette's heart. As the old legend says, flowers appeared at the place where the heart of unfortunate Jeanette was broken, who saw her beloved marry another. In England, the plant is called "the lady in the bath". The name in Latin is formed by two words: "dis", "kentron", which are translated from Greek as "twice" and "spur", as a result, the translation of the word "dicentra" sounds like "two-spur" or "flower with 2 spurs". The flower came to Europe from Japanese territory in 1816, and instantly became very popular in the aristocratic circle. Further, the culture was almost forgotten, but now it is again popular with both professional flower growers and newcomers to the gardening field. 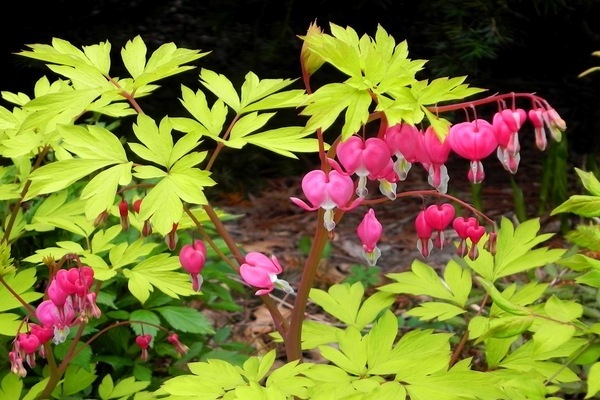 The genus of this vegetation includes about twenty varieties, most of them grow in the North American, Far Eastern and East Chinese territories. The bush reaches a height of 30-100 cm. The flower has a dense, elongated root that goes deep into the soil. The leaves are decorative, green in color, feathery and dissected, cast in a bluish tint, they also have petioles. The flowers are slightly compressed, in the form of hearts, pale red or light pink in color. In diameter, they reach about two cm, they form inflorescences that droop, are presented in the form of arcs, and are distinguished by a brush-like shape. Corollas contain a pair of spurs. The fruit is a box, inside it are shiny black seeds, which have an elongated appearance. Seed germination lasts for two years.

Planting a flower under the open sky is carried out from the end of April to the beginning of May, as well as on September days. When planting in autumn, keep in mind that plant survival should be good, and the development of the root system should occur before the onset of the frosty period in the winter season. For this culture, a place with good illumination or shaded is selected. But in the area brightly lit by the rays of the sun, the bush will bloom many times faster. Dicenter is cultivated on any soil, but the best soil is light, well-drained, moderately moist and fertile soil. Land for planting is prepared in advance. When planting in the spring season, prepare the site in the fall, and when planting in autumn, prepare the site in the spring. The soil is dug deep into the bayonet of the shovel, and humus is immediately introduced (3-4 kg / square), then the soil is spilled with a solution prepared from a mineral mixture (20 g of fertilizer / bucket of water).

First, the pits are prepared for planting. In diameter and in depth, the hole should be 40 cm, and an interval between the bushes of 50 cm is observed. Drainage, consisting of broken brick or gravel, is laid at the bottom of the hole. Then garden soil is poured into the hole, mixed in advance with compost fertilizer. Next, a seedling is lowered into the hole and covered with a soil mixture of the same composition (see above). In heavy soil, it combines with sand, and lime can also be added, the plant will like it. 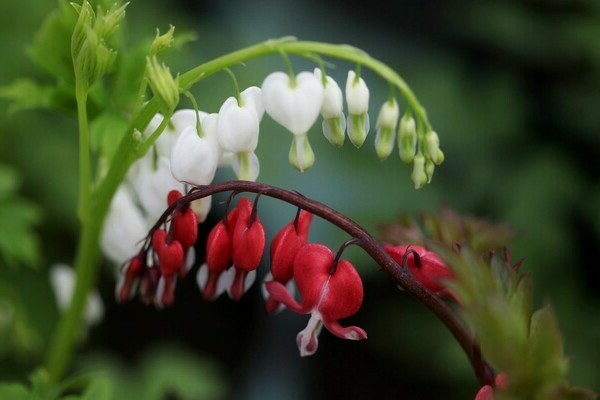 Watering is applied in a moderate amount; regular loosening of the surface soil layer and timely weeding are still required.Moreover, keep in mind that the roots will develop normally with a sufficient amount of oxygen, therefore, loosening of the soil is inevitable. When shoots appear in spring, they are covered at night in order to avoid death due to cold snaps. Watering is done with non-hard water. During the dry season, the frequency of watering increases, but do not forget that if you over-water the plant, the root system will rot. The flower needs regular feeding. In the first spring days, he needs nitrogen-containing feeding, during the beginning of flowering, superphosphate is needed, in the fall the trunk circle is spilled with mullein infusion and mulched with humus. To extend the flowering period, you need to remove flowers that have begun to wither in time.

The plant does not require frequent transplants; it can grow in one place for 5-6 years. Then you need a transplant to a new place. Once in a couple of years, the culture is planted, otherwise, the overgrown root system will rot, this will lead to the fact that it will partially die out. In the first autumn days after the bush has bloomed, or in late April-early May, a plant that is three to four years old is carefully dug up, try not to harm the roots. After the roots dry out, or rather, their slight withering, they are neatly divided into fragments of 10-15 cm, and each should have 3-4 buds. The sections are sprinkled with ash. After this procedure, the plants are planted in a new area and watered. For the splendor of the dicenter, 2-3 root segments are planted in one hole at once. The transplant is carried out in the same way as planting.

It is possible to spread the dicenter by dividing the bush, the description is set out above, and reproduction can also be carried out by the seed method. The seed method is very difficult and time consuming, but still this method is used by some growers. Moreover, there are successful cases of plant cultivation from seeds. Sowing is carried out on September days, the containers should be placed in a cool place (temperature - 18-20 degrees). The seedlings will appear after about a month. After the seedlings have two true leaves, they dive into open conditions. For the winter season, the plant needs to be covered with polyethylene. A plant cultivated from grain will begin its flowering after three years.

Cuttings can be carried out on the first days of spring. It was at this time that cuttings are harvested, for this purpose, young shoots with a heel are cut off. The cuttings should be about 15 cm long. For a day, they are placed in a solution to stimulate root formation, then they are planted in pots and rooted in them. Plants are rooted in light and moist soil; it is imperative to cover the pots with glass, which will be removed after a few weeks. After rooting, the cuttings are transplanted to the garden plot only after a year.

The plant has a high immunity to diseases, but at times it can be affected by tobacco mosaic and ring spot. In the infected dicentra, spots and stripes appear on young foliage, and pale oblong rings similar to oak leaves in silhouette on an adult. In rare cases, the bush is susceptible to mycoplasma disease, due to which the curvature of the peduncles occurs, growth retardation, and the color change to green or yellow. Preventive measures - competent watering, because an excess of water will weaken the flower, and it will get sick; soil treatment with a solution of the preparation "Formalin", but planting in such soil can be carried out only after 4 weeks.

Of the pests, the plant is attacked by aphids. To destroy it, the bush is treated with Antitlin or Biotlin preparations.

Seed collection of a plant that is grown in mid-latitudes is not recommended by professionals. And all because under these conditions, ripening of the grains may not occur. However, the germination capacity of ripe grains is very low.

How to prepare the dicenter for the winter season.

In autumn, the above-ground part is trimmed almost to the surface soil layer. The stumps should be 3-5 cm high. Despite the frost resistance, the bleeding center is still sheltered for the winter season. For this purpose, the plant is sprinkled with peat (layer - 5-8 cm). Do not make the layer thicker, otherwise the roots may rot. 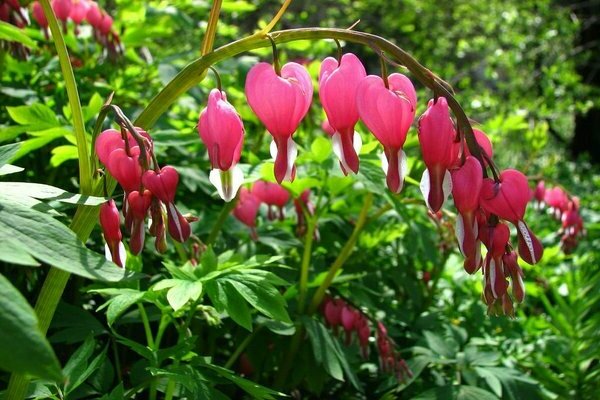 The flower comes from the North American west. This perennial plant grows up to 0.2 m. Shoots are dense, there are no leaves on them. Finger-shaped leaves, divided, contain small lobes, and the leaves are included in lush basal rosettes. The flowers are pink in color, grow to about 25 mm in diameter, they form inflorescences in the form of arcs, brush-shaped, which reach a length of 15 cm. Flowering begins on the 20th of May, lasts for three months. The bush is frost-resistant to a high degree (tolerates cold up to -35 degrees), but the soil surface layer is mulched in autumn. The variety has been cultivated since 1812. There is a white-flowered species.

In Europe, the species came from Colombian territory. There the flower is found from the center of California to the humid forest. The plant grows up to 30 cm. The leaves are green, finger-shaped, divided, their inner part gives off a little bluish tint. The leaves are kept on elongated petioles, included in the basal rosette. Inflorescences grow up to 10-15 cm. They contain small flowers of pinkish-purple color, 20 mm in diameter. The bush begins to bloom at the end of May and continues until the autumn season. The center is frost-resistant, but still it needs to be covered for the winter season. The species has been cultivated since 1796.

"Aurora". The lower petals are white, the upper ones are painted in light pink colors next to the flower stem.

King of Hearts. The flowers are deep pink, the leaves are bluish light blue. 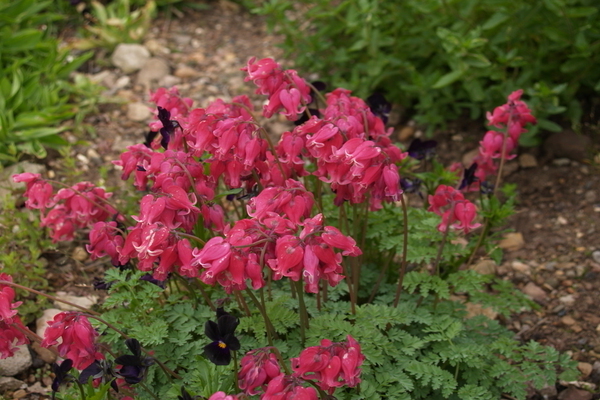 This variety has a subspecies - "Oregana" dicenter. It is an endemic Californian and Oregon plant. The flowers are bright pink or white-cream with a pinkish tint. The "Alba" shape is distinguished by white flowers. 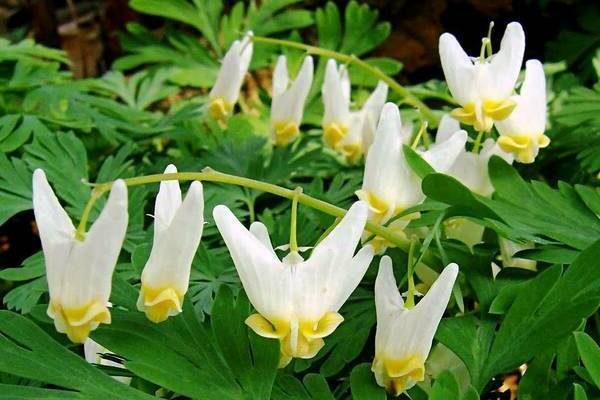 Homeland - the eastern part of the North American territory (states of Oregon and Washington). The rhizome consists of small nodules. Leaves are greenish-gray in color, thin, dissected, make rugs out of rosettes. The peduncle grows up to 30 cm, it bears white flowers that have elongated spur. This variety is often grown indoors. It also has a cultivated form - "Pittsburgh", its flowers are pink. Not so long ago, there is a form that has flowers of a lemon-yellow color.

The plant is native to the Mexican territory, as well as from the Californian slopes. The bush can grow up to 45-152 cm. It begins to bloom at the equator of spring and continues until the beginning of autumn. The flowers are bright yellow and bear two originally curved petals. If you cultivate a dicenter in a garden area, then expect whims, a wild plant grows quickly in areas after fires. 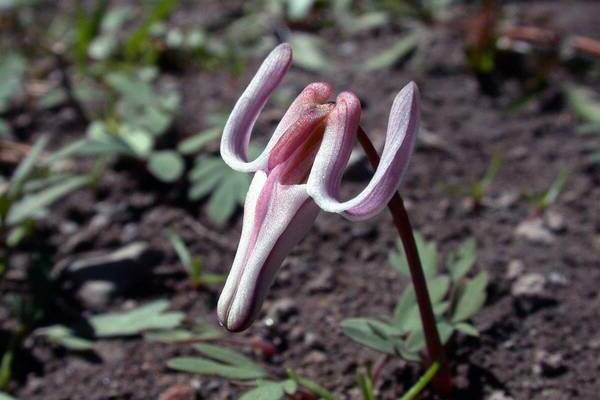 The species is found wild in Idaho, in northern Utah, and in the North American territory from the Sierra Nevada to Washington state. This flower is often referred to by the people as "ox's head" because it has an original shape. Single flowers appear in February-July days, and the peduncles reach a length of only 10 cm. Separately from the peduncles, feathery leaves grow back. This variety is quite effective, but its care is not easy.

You can also grow the following types of dicentra: "Maloflower", "Whitish-yellow", "Canadian".