The New Zealand delphinium variety is an excellent perennial that can decorate and transform absolutely any personal plot. Now there is a great variety of varieties of this flower, but in order to get the desired result, some effort should be made in caring for it. The result will please you very much. 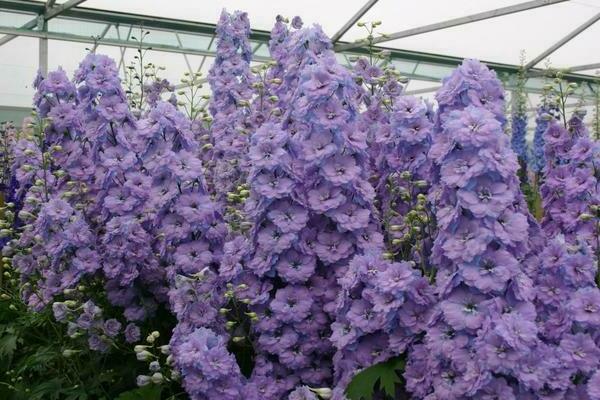 The perennial New Zealand delphinium is considered one of the most beautiful perennials, which can reach a height of up to two meters, and can also quite easily do without a transplant, growing in one place for up to 7-8 years. This flower has a structure of a dense, strong and high stem, covered with a large number of shoots, dissected leaves of a rich green hue, large inflorescences, which are collected in brushes, reaching a height of 70 centimeters. It is by the flowers that the perennial New Zealand delphinium is recognized, which most often consist of five sepals each separately, have a white tint, as well as cornflower blue, red, violet and purple, depending on the variety of this delphinium, but the buds are almost always similar in diameter - about 10 centimeters.

Delphinium New Zealand has another name - spur, thanks to the spurs present on its upper petals. The flowering period of this plant lasts from the end of June to the first half of August, and with the timely cutting of the faded brush, it is possible to achieve that the delphinium will give a second color in September. In the wild, this delphinium can be found growing in America and Europe. But by the cultural method, this plant is bred all over the world, the flower can grow in absolutely all countries with a predominance of warm climates.

In our time, there are dozens of varieties bred by breeders of the perennial New Zealand delphinium. They have differences in color and height, but their growing and care features are almost always similar.

Let's take a look at some of the most common varieties: 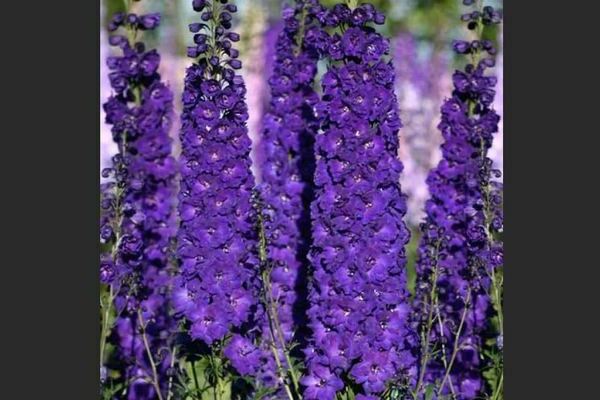 The delphinium variety of the New Zealand Giant is characterized by a whole group of rather strong and tall varieties of this plant with very large inflorescences of a double structure. This delphinium can grow up to two meters in height, have a fairly abundant and lush flowering, and also quite long.

In the group of the New Zealand perennial Giant delphinium, varieties can be distinguished such as:

All plants of the Giant New Zealand delphinium group are unpretentious in cultivation and care, they can grow well in different weather conditions. During the mild winter season, these delphiniums are not required for shelter. 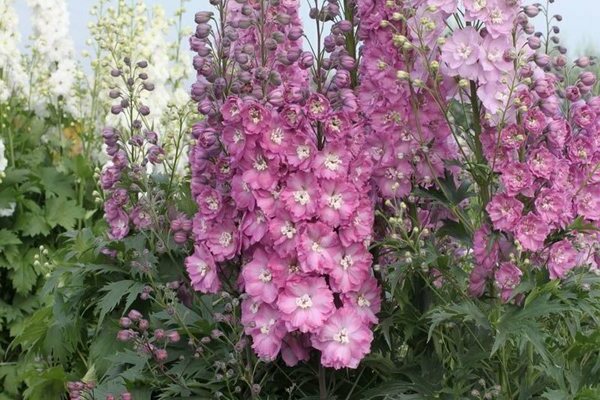 Delphinium variety of New Zealand Sweetheart received an award from the English Royal Garden Society. It can grow up to two meters in height and is endowed with a fairly dense and abundant flowering. The flowers, in turn, are large and pink in color, and in their center are striped or pure white eyes. This subspecies has high decorative characteristics and looks great both in single and in group planting. The rules of cultivation and care do not differ from other varieties of delphinium, he also prefers humidity and survives frosts well, but he needs insulation for the winter period. 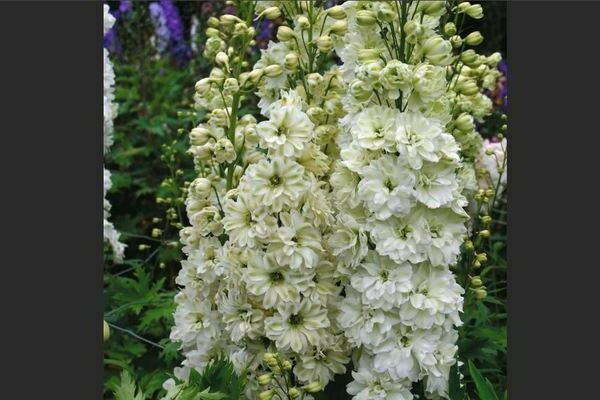 The average height of this plant can reach about one and a half meters. Flowering begins in June and lasts until the beginning of autumn. The flowers have a snow-white color and double structure. A distinctive feature of the variety is the presence on its petals of faded strokes of a yellow hue, as well as in the middle of the inflorescence of a green eye. This delphinium variety is hardy enough to any weather conditions, but needs constant watering. 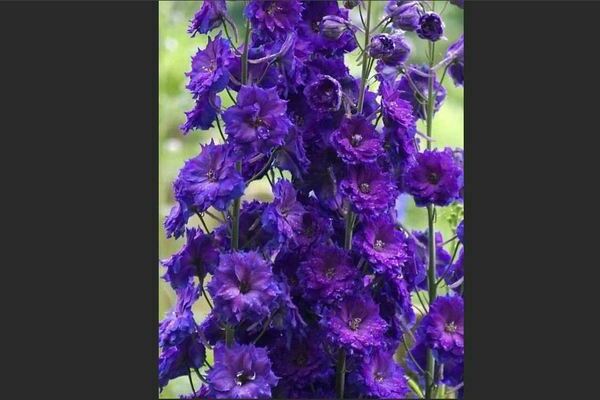 This variety is distinguished by its height, which can be up to 1.9 meters, and large flowers with a double structure. The flowers have a bright purple color. This flower looks great both in single and in group plantings. Care for this plant requires a standard, delphinium can easily survive frosts and poor lands, but needs constant watering. 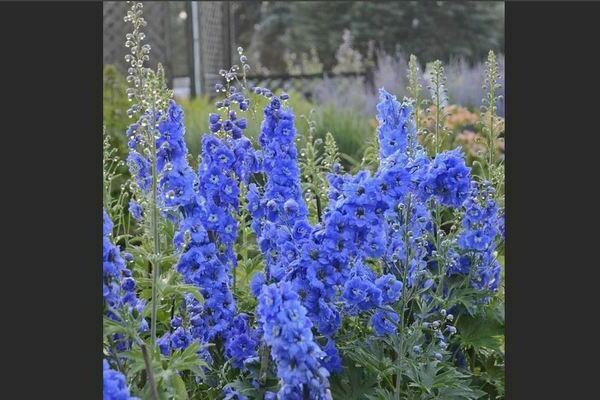 One of the artificial varieties of this plant. The flowers of this delphinium are endowed with a dark blue tint with a whitish center in the middle. Have a great view in landscape design. It is possible to cultivate this plant in almost any weather conditions, since with high-quality care this variety can quite successfully endure frosts, while maintaining its health and decorative qualities. 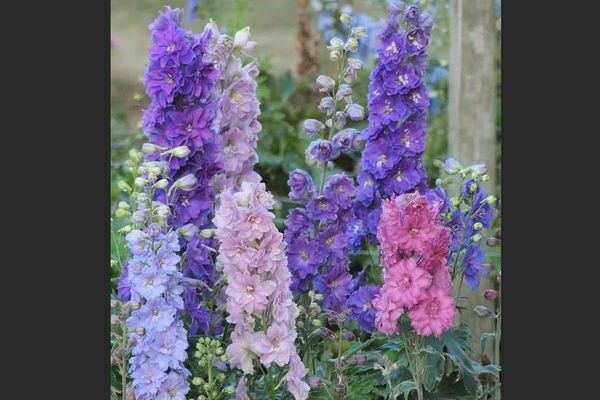 This variety is most often sold as a flower mixture, which consists of four shades: blue, lilac, purple and dark pink. This variety is characterized as a dwarf subspecies, since the height of its rather strong peduncles is often no more than 70 centimeters, and for a plant such as a delphinium, this size is quite small. But this plant has rather large flowers in size, about 9 centimeters. A distinctive feature of the variety is that it can be grown not only in open space, but also in separate containers on the balcony, and at home in pots. 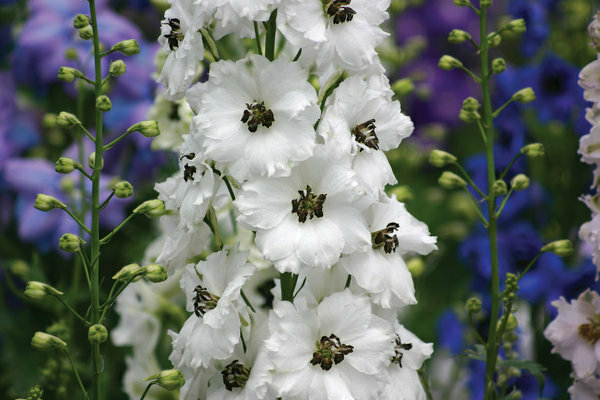 Literally translated, the name of this variety sounds like black-eyed angels. And the flowers received this name not in vain, but due to their beautiful and interesting appearance. The flowers are quite large in size, have a snow-white shade and an anthracite-black core.On average, this plant can grow up to 1.2 meters tall. The stems of this delphinium are quite dense and strong, the flowers grow on them quite densely and are endowed with a diameter of about 8 centimeters. 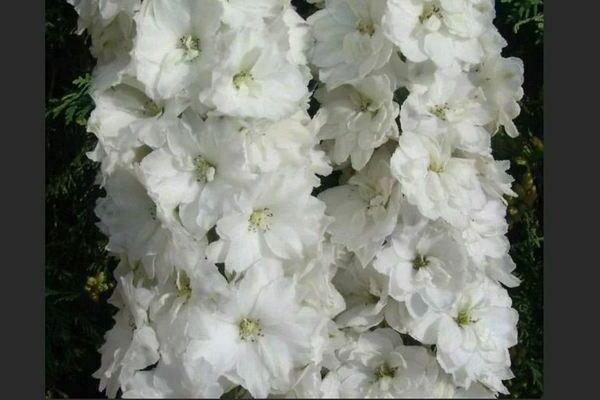 This subspecies belongs to the New Millennium group of varieties and is distinguished by its large flowers, reaching 4 centimeters in diameter, with a double structure and snow-white color. The flowers of this variety are collected in inflorescences that bloom in the middle of the summer season. It is worth noting that the flowering period of this subspecies is quite long, since on the branches of this plant there is an exchange process of withering flowers for young peduncles. The subspecies is endowed with a high level of frost resistance, so it can do even without shelter in winter. 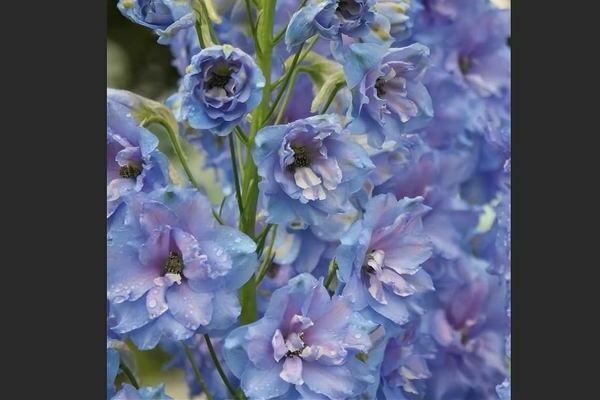 The flowers of this variety are quite large, very beautiful and endowed with a flight structure, a light purple color with a more intense blue tint near the edges of the sepals, and a yellow core. The plant can reach one and a half meters in height. The flowering period is quite colorful, bright and abundant. The subspecies is distinguished by a high level of cold tolerance and unpretentiousness in cultivation and care.

How to plant a New Zealand Delphinium correctly: planting a variety 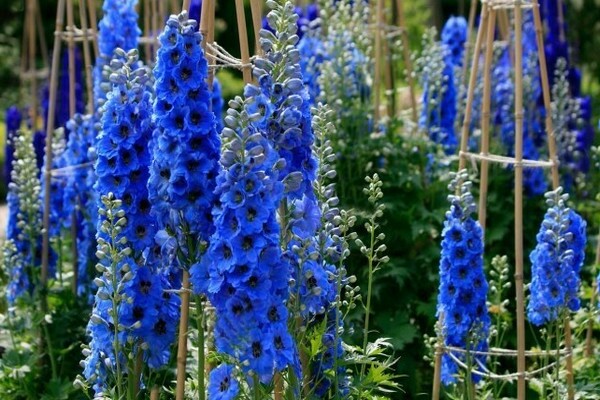 The cultivation of the New Zealand delphinium does not cause any particular difficulties. You just need to follow the basic rules for planting and leaving.

After all these actions, the plant needs to be watered well. After that, as experienced gardeners advise, young plants need to be covered for the first time with a glass jar or plastic wrap in order to increase the humidity and thereby contribute to the fastest rooting and adaptation. Such a shelter is removed at the moment when the plant begins to grow so intensively.

Growing New Zealand Delphinium from seeds is considered one of the simplest breeding methods. Seeds should be harvested in the autumn after the end of the flowering period. After that, the seeds are pre-soaked and sown in special containers. Approximately two weeks pass before the seeds germinate, after which it remains only to follow the rules for caring for these sprouts until the onset of the spring period, then they are already planted in an open space. But it is worth knowing that the seed method also has its drawbacks, such as: not always seedlings can inherit all maternal characteristics and qualities, so their decorative abilities may be worse.

Another fairly easy and effective way of reproduction is considered to be the division of an adult bush. It happens like this:

Often, this plant begins to give color already in the next year.

During the procedure for dividing an adult of this plant, it is not necessary to leave several pieces of growth buds at once, this perennial has a rather rapid and active development, which is why it is quite possible to grow a healthy and beautiful new plant from the division on which one bud is present.

Among the common methods of propagation of this plant, cuttings can still be distinguished:

Within one year, cuttings are grown in closed containers so that they can grow well, and the next spring they are planted in an open area according to the usual planting scheme.

How to grow New Zealand Delphinium from seeds

Most often, the New Zealand perennial delphinium is grown from seeds. If this is your first time planting this plant, then the seeds can be easily found and purchased at a specialized store. If you already have this perennial growing, then you can collect the seeds yourself at the end of the flowering period. We recommend purchasing seeds from trusted suppliers, and self-picking is best done in fairly dry weather, at the moment when the fruits become brown and fully ripe.

After that, the film is removed from the containers, the seedlings are watered and in the future, as the soil dries up, watering is also carried out. After the formation of three full-fledged leaves in the sprouts, the seedlings need to dive - transplant them into separate containers filled with nutritious and loose soil. And only after the sprouts have matured enough, they can be planted in an open space.But first prepare the sprouts for planting, for this you need to periodically take out the seedlings to fresh air, gradually increasing the time the seedlings stay in the air.

Absolutely not capricious and beautiful perennial New Zealand delphinium is still vulnerable to some dangerous pests and diseases.

The most common and dangerous diseases for him are:

To get rid of harmful fungi, the plant should be sprayed with special chemicals, such as, for example, Fundazol or Topaz. But in order for this to bring the proper effect, you need to do this procedure as soon as you notice the first manifestations of the disease.

Of the harmful insects that attack the perennial New Zealand Delphinium, slugs and the delphinium fly are considered. They feed on the green parts of this delphinium and are able to destroy the entire plant. To combat these harmful insects, insecticides are used, for example, Karbofos or Actellik. But it is best to start the measures to combat in advance, even before it begins. To do this, it is worth spraying this plant in preventive measures and then this flower will delight you with its color.

On the Internet, you can read a huge number of reviews about the New Zealand delphinium. Here are some of them: 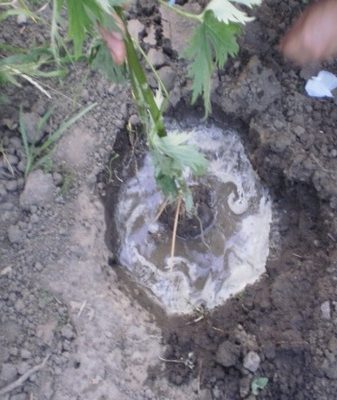 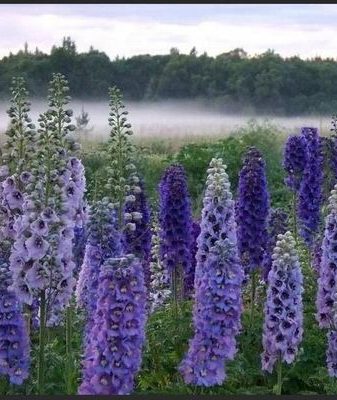 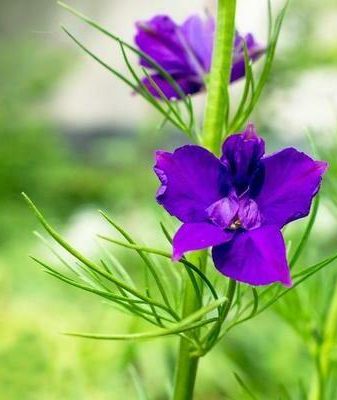 Delphinium (larkspur) field
In the treasures of nature, it is possible to take a lot to support and save our body with such ...
×