Sweet cherry Tyutchevka is the best version of sweet cherry, which is actively grown in the Central zone of Russia. The tree perfectly tolerates winter frosts, and besides, it has a high immunity to various fungal diseases common for cherries. It is thanks to these qualities that the Tyutchevka cherry variety is in great demand among gardeners.

Cherry Tyutchevka was bred by the famous breeder M.V. Kanshina in Bryansk. The hybrid was obtained by crossing varieties 3-36, as well as Red Platinum. The plant was officially registered in 2001. 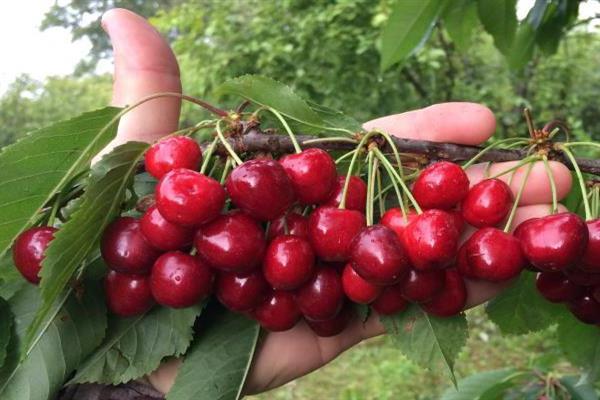 This tree is recommended to be grown in the Central zone of Russia. It is here that the Tyutchevka cherry varieties will give maximum results. The tree itself is compact and vigorous. The crown here is quite spreading, has the shape of a circle and is not prone to thickening. Shoots are short, strong enough and light brown bark.

Generative and vegetative buds are cone-shaped and pointed at the tip. The leaves here have the shape of an oval and a characteristic sharpening towards the top. Along the edge, the entire leaf plate has notches, and the leaf itself resembles the shape of a boat. Cherry leaves are attached with a small petiole firmly enough. The surface of the leaf blade is glossy, with a pronounced dark green color. The inflorescences here are formed on bouquet branches and contain 4 flowers each with a white tint and a saucer-shaped corolla. It is in this way that the inflorescences placed give out the main amount of the crop. A small number of inflorescences are formed on the shoots.

Speaking about the fruits of the Tyutchevka cherry, it is worth noting that they are round in shape and weigh just over 5 or 6 grams. The fruits are attached to the branch with strong but short stalks. At the top, the fruit has a roundness, as well as a moderately pronounced funnel. The diameter of the berry is just over 2 cm. The skin has a bright dark red hue, on which you can see the subcutaneous points.

The flesh of berries of the cherry variety Tyutchevka tastes like gristly and contains a large amount of red juice, which can be clearly seen when the berry is broken. Inside each fruit there is an oval-shaped bone that makes up 6% of the weight of the entire fruit. It is difficult to separate from the pulp. Fruits of the cherry Tyutchevka contain a large amount of sugar, solids, acids and vitamin C. It should be noted that the berries of this cherry variety have a slight separation when harvesting, which remains dry. In addition, the fruits are not prone to cracking and tolerate transportation well.

Cherry Tyutchevka: characteristics of the variety and pollinators

During the testing of the cherry variety Tyutchevka, a sufficiently high resistance to winter was noted, relative to the climate in the Central zone of Russia. Thus, lowering the temperature in winter to 25 degrees does not have a negative effect on the plant. At a temperature of -35, some branches are already beginning to freeze. However, they recover quickly in the spring. Moreover, even in the coldest winters, the tree was damaged by 0.8 points. The kidneys also froze in an amount not exceeding 20% ​​of all kidneys. However, the flowers are not resistant to spring return frosts. So at a temperature of already -5, almost more than half of the flowers froze.

Since the Tyutchevka cherry is partially self-fertile, it is necessary that other varieties of cherries, which bloom in late spring, grow in neighboring areas or in the same area. Pollinators of Tyutchevka cherries include Bryansk pink, Lena,  Iput, Jealous etc. Thus, by planting these varieties, you can increase the amount of yield, since cross-pollination will occur between them. The fruits are usually harvested in the second half of summer. If the summer is too rainy, then the berries may start to crack.

Cherry Tyutchevka: features of the variety 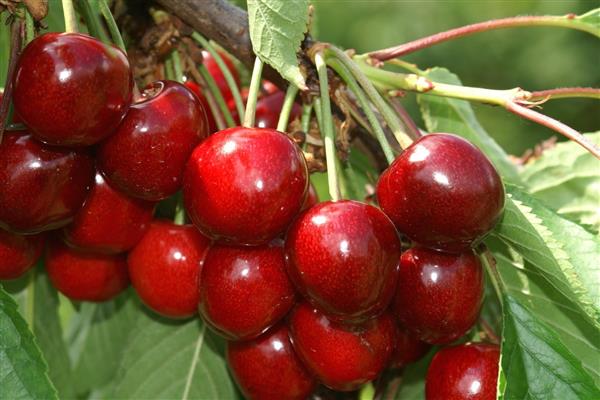 However, if the tree grows in suitable conditions and the necessary care is taken, then one crop can yield 40 kg of berries. The tree has a life and fruiting period of 20 years.

Cherry berries Tyutchevka have a universal purpose: they are consumed fresh, used to prepare blanks in the form of jam, confiture and compotes. To preserve the maximum amount of vitamins, berries can be frozen.

When breeding the cherry variety Tyutchevka, the emphasis was on high immunity to various diseases common to sweet cherry. Therefore, this plant is rarely affected by moniliosis, as well as diseases such as clasterosporia and coccomycosis. In order for these properties to take place, it is necessary to follow the rules for caring for the tree.

The positive characteristics of the Tyutchevka cherry variety include a high yield and its stability, high external and taste qualities of fruits, their resistance to transportation, to frosty winters, as well as high immunity to various diseases caused by fungi.

Of the negative properties of Tyutchevka cherries, the partial self-fertility of the plant is distinguished, as well as the tendency to cracking with a large amount of precipitation. 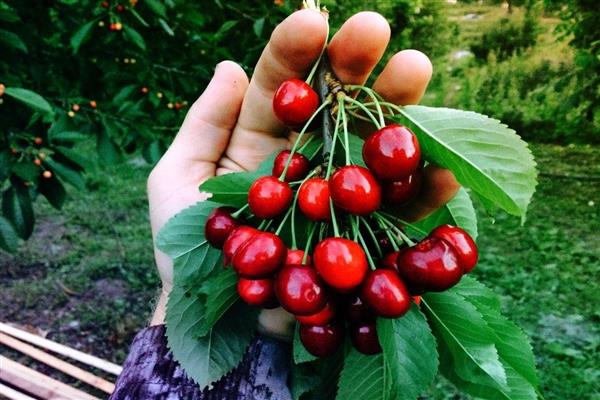 The optimal time for planting the Tyutchevka cherry variety will be spring, so that the plant has time to take root well before the winter period. When choosing a seedling for planting, you need to buy an annual or biennial plant, preferably from a proven nursery. In this case, it should already have leaves and twigs. It is necessary to carefully examine the entire seedling for the presence of various signs of the disease: the roots must be strong, as well as the stems. In addition, there should be no scratches or damage on the bark and kidneys. If you bought a seedling with an open root system, then it must be placed in a clay mixture for several hours. It will be good to pre-soak the plant so that the root system is well straightened.

If the cherry seedling Tyutchevka is in a container, then it can be planted in spring and summer in any month. It is not recommended to plant plants in autumn. When choosing a place for planting, you should know that the most delicious fruits will form on the tree that will grow in an open and protected place from the sun, protected from strong drafts with the help of various buildings and structures or a fence. When planting a plant near a hedge, you should retreat a distance of at least 2 meters.

The soil on the site should be loose, drained, with a neutral acidic reaction and rich in nutrients. It is not recommended to plant a crop next to nightshades, and other cherry or sweet cherry crops will become the best neighbors for the plant, which will increase the tree's yield, and you can also plant cherries next to berry bushes. The distance between landings should be at least 4 meters.

First, you need to prepare a planting pit, which will be 60 by 80 cm in size. A sufficiently thick layer of drainage is laid out in it, and the earth is also dug up. A support is immediately placed in the center of the pit, to which a young tree will be tied. Then the seedling is placed on a mound, carefully spreading the entire root system. Next, you need to cover the planting with fertile soil. When planting, it is necessary to control that the root collar is at least 5 cm above the ground level. In addition, it is necessary to compact the soil and also form a near-stem circle so that moisture does not spread out during watering.

After the tree is planted, pour a bucket of water over the seedling and lay out a thick layer of mulch. Formative pruning can be started immediately.

Caring for the Tyutchevka cherry variety comes down to standard manipulations that are performed for other cherry varieties.

After planting the tree, the most common care is carried out. It is necessary to weed the trunk circle in a timely manner, water and loosen the soil after watering, as well as after rain.

It is necessary to water the plant abundantly during flowering, as well as during the formation of fruits. In addition, watering will also be needed to prepare the culture for the winter period. If there is too much rainfall, then the soil should be covered with polyethylene to prevent waterlogging of the tree.

Sanitary and formative pruning is carried out in early spring, as well as in autumn after foliage has fallen, where old, dried and diseased branches are removed. Before sending the tree to winter, wrap the trunk with netting or some other covering material to protect it from rodents and freezing.

It was noted that the Tyutchevka cherry variety has a high immunity to common fungal diseases. However, it is imperative to remove all fallen leaves and fruits in the fall and be sure to dig up the site before the winter period. When spring has just begun, it is necessary to carry out prophylactic treatment with fungicides.

In addition, you should take care of the tree and periodically use trapping belts and other traps when attacked by insects, and if there are too many insect pests, then insecticides will be needed here.

Cherry Tyutchevka is a variety that you can be proud of, since the plant is completely unpretentious, and at the same time yields a large number of tasty fruits if grown in Central Russia. In addition, the cherry tree Tyutchevka has a good immunity to various diseases and insect pests.

Aphids on dill: how to get rid of? what to spray? + folk methods

Carrot fly: how to treat carrots from this pest 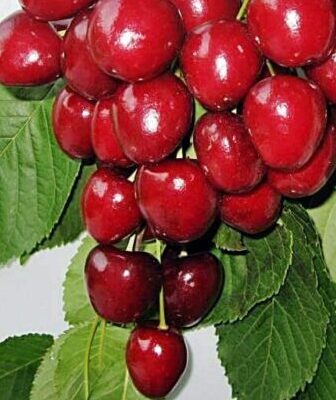 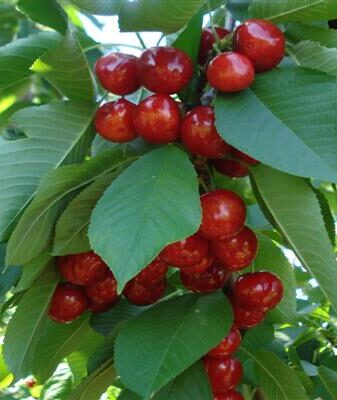 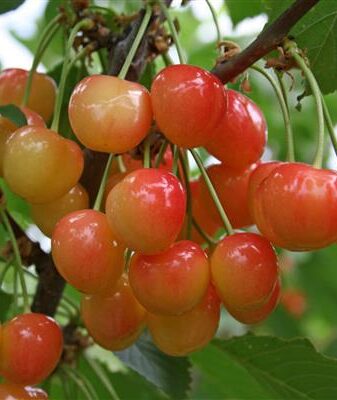 Sweet cherry Julia
The birthplace of this culture is the Voronezh region, and officially the sweet cherry Yulia was ...
×