Briefly about the Colorado potato beetle

Important facts about the life of the Colorado potato beetle

The most vocal enemy - you need to know by sight. 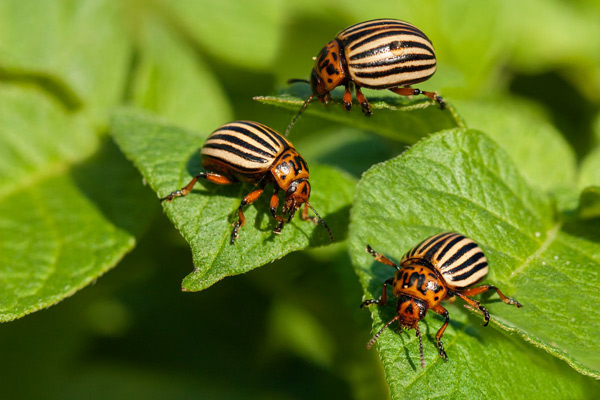 It should also be remembered that this pest is quite tenacious. With a cold snap, adult specimens begin to hide in the soil for at least seventy centimeters, and begin to reappear in the open air only at a temperature of fifteen degrees.

What the pest eats

Over time, these herbs dry up and the pest moves to cultivated plants, for example:
1) Tomato;
2) Potatoes;
3) Eggplant.

But mainly his interest falls on potato bushes, and he absorbs tomatoes and cormorants, as if in one.

It reproduces where it eats, that is, on potato leaves. Females begin to lay eggs on the bottom of the leaf, about ten to thirty eggs. It is from them that the larvae appear. Each month, one larva eats one gram of foliage, and an adult specimen eats four grams of foliage. At first glance, it may seem that this is not so much, but if you take into account the number of colonies, it is easy to understand that a beetle can easily destroy a plantation. Colorado beetles reproduce very quickly, in just one season, one female can lay eggs four times, that is, about forty to one hundred and twenty larvae hatched.

Since the fight against this pest is not a new thing, a lot of ways have already been invented. The methods are quite simple, requiring no special skills and high costs. The only factor is the environment.

Everyone knows that the Colorado potato beetle doesn't like onions. You can even say that he is afraid of him. Onions can make you leave their homes - whole colonies. If you want to avoid the attacks of the Colorado until the potato blooms, then during the planting process, simply sprinkle each bush with onion husks. 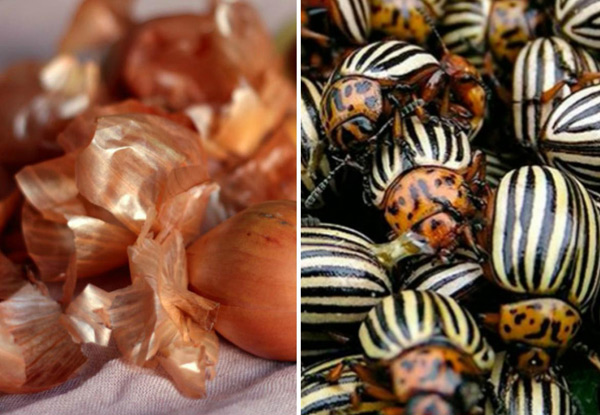 The first recipe with onion peels

A three-liter container needs to be filled with onion husks by thirty percent. Then pour hot water (about forty degrees). Next, insist for about two days. After a couple of days, rub six grams of laundry soap into a vessel. And only then you can process their potato foliage.

The second recipe with onion peels

Five hundred grams of onion husks must be poured with boiling water, then let it brew for forty-eight hours and mix with soap. Then you can start spraying the potato bushes. This tool can only be used in the fight against a pest, for preventive purposes - it will not work.

Fighting the Colorado potato beetle with decoctions and infusions

There are an endless number of recipes for decoctions and infusions, let's take the most effective and productive ones as an example.

In ten liters of water, you need to dilute: one hundred grams of soda and two hundred and fifty milliliters of vinegar.

For ten liters of water, you need to take: one hundred grams of urea. In addition to the fact that this tool will help in the fight against the Colorado potato beetle, it will also saturate the culture with nitrogenous substances.

In ten liters of water, you need to add one hundred grams of hot pepper. Next, boil it all for about two hours, then add fifty grams of grated laundry soap. Let it brew for four days and start using.

You need to take a large container, like a trough. Fill it with three kilograms of burdock foliage, then fill it with warm water. You need to insist for about three days. But it should be remembered that this infusion smells - very unpleasant. Therefore, do not leave it indoors.

These are methods with dusting potato bushes. All of these methods are good only with constant use. It is important to remember that you need to sprinkle not only the foliage, but also the soil around the bush.

It has long been known that when corn flour is in contact with moisture, it greatly increases in size. So, if an insect eats it, that in the end it will simply burst.

This method is similar to the cornmeal method. Upon contact with moisture, it will harden and the pest that ate it will simply die.

Birch ash is the most destructive in relation to the beetle. Both adult specimens and larvae will die from it.

The smell of fresh wood is very unpleasant for beetles. So there is sawdust sprinkle the space between the beds, before and after flowering, they will not come close to the bushes. 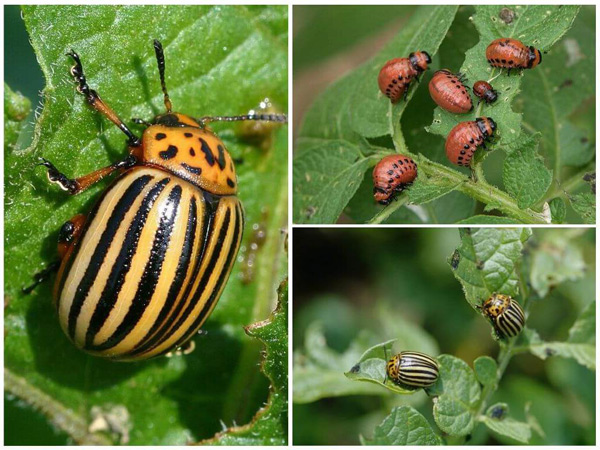 The most proven is the planting of plants that the Colorado potato beetle does not tolerate. For example, these plants can be:
1) Marigolds;
2) Beans, that is, beans;
3) Garlic;
4) Calendula.

You can plant them between the beds, or you can plant them right next to the potato bushes. If the Colorado potato beetle nevertheless penetrated your plantings, you need to try to avoid its further reproduction:
1) It is necessary to carry out timely hilling of the bush, so you can destroy the laid eggs, and at the same time open the bushes access to oxygen;
2) At the moment when the larvae of the Colorado potato beetle begin to disappear from the bushes, it is urgently necessary to begin to loosen up the places between the beds. Indeed, it is at this moment that they become as vulnerable as possible, since they begin to wind a cocoon there;
3) Before freezing, you need to dig up the area, because if the larvae find themselves on the ground, they will simply die from cold temperatures.

All these folk methods have long proven themselves well. Control methods are as important as prevention methods.

Conifers - diseases and the fight against them, wintering + photo

Spring work in the country: cleaning, pruning, treatment for diseases.