Biogard against weeds: instructions for use
8 660

Biogard against weeds: instructions for use

For every farmer and gardener, the primary goal is to protect their crops from various pests and diseases, as well as to find drugs that will intensify the growth and productivity of the plant. Weeds are one of the main reasons why seeds do not germinate, crops grow slower, and they simply refuse to bear fruit, since weeds suck out all nutrients and trace elements from the soil. Biogard against weeds is the very tool that will significantly simplify the life of a gardener.

Anti-weed agent Biogard destroys weeds and allows you to save your time and effort on weeding, which is simply necessary in modern horticulture to maintain and preserve crops. The drug is able to actively affect the roots of weeds, quickly and effectively destroys them. 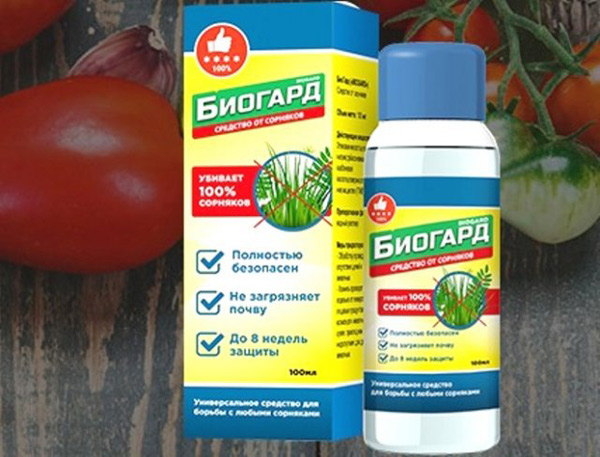 The peculiarity of the drug is that it is completely harmless to horticultural crops, and acts exclusively on weeds. It is necessary to spend some time on processing, and the result will not be long in coming: in just a few days the gardener will notice how much less weeds have become in the treated area, and the performance indicator is precisely the visibility of the effect of this drug.

Biogard turns out to be equally effective in the fight against perennial weeds and in the fight against common perennials. First of all, it immediately attacks the weed root system, and after a few days the weed plant completely dies, as its system is disrupted, and it simply has nowhere to draw strength from. As soon as the drug is in the soil, it has a targeted effect on the weeds. At the same time, garden crops are not exposed to any effect, and this is the most important thing, because many drugs can penetrate into crops, into fruits, and they become less safe for the person himself, who will use them in the future.

As soon as this concentrate hit the shelves, it immediately became incredibly popular. Its use contributes to an increase in the level of productivity of various crops, and also has a positive effect on the productivity of the gardener himself: he no longer spends a huge amount of time weeding crops, but can devote it to some other important processes in the framework of gardening. Nevertheless, it is worth making a reservation that this tool does not kill all weeds by 100%, but it can still eradicate most of such harmful plants, and this is already a huge plus. Also, the drug is valid only for one season, but manufacturers can guarantee that the next season there will be noticeably fewer weeds, but still no one dissuades the gardener from the second and subsequent treatments.

Biogard is a development of Russian scientists, and its advantages are as follows:

According to its characteristics, it seems that this tool has some kind of magical properties.In the next part of this article, we will dwell in more detail on which of the above is true, and which are only relative and subjective guesses. We will also talk about the real effects of this drug, based on feedback from those who have already managed to use it on their own personal plot. 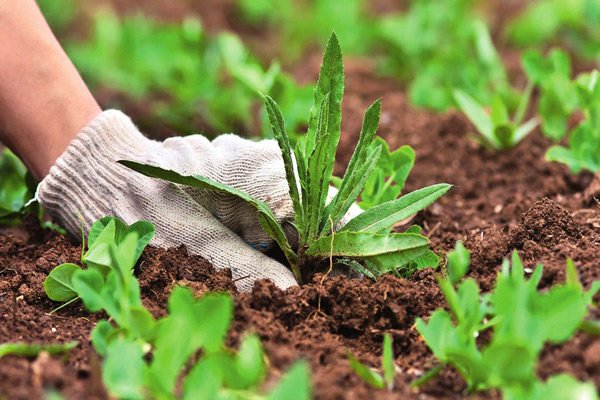 Even before this drug was developed, gardeners had to weed their area at least twice a season, since the weeds were just gaining strength and were not going to leave the site. But even despite this, the weeds still continued to break through the soil, grow, completely sucking all the nutrients right from the soil with their root system. Plants that were in weed thickets experienced a noticeable lack of nutritional components: they began to gradually wither, die out, their flowering and fruiting was reduced to a minimum.

The appearance on the horticultural market of a drug called Biogard at first caused only a flurry of fears, doubts and criticism. Gardeners simply did not believe that the drug worked. When they were convinced of this, new arguments appeared in favor of the fact that the drug is undoubtedly effective, but it can be dangerous to human health. Clinical studies were carried out, which, contrary to all rumors and guesses, proved that the drug has a high level of effectiveness, and at the same time is as safe as possible for human life and health. Also, the results proved the following properties of this drug:
- it is able to increase the yield level by 50%
- 99% destroys various (more than 400) types of weeds, but only for one season.

The tool is suitable for perfectly performing the tasks assigned to it. At the same time, it does not pollute the soil, does not accumulate in it, and if used correctly in accordance with the instructions, the agent is completely safe for the human body itself, as well as for cultivated plants, which just need to be protected from attacks from weeds, pests and fungi. ... The drug has already received a quality certificate, according to which it is completely harmless, but at the same time has a high level of effectiveness, and this plays a very important role.

Biogard against weeds: instructions for use

Of course, speaking about any drugs, you need to understand what their principle of action is. The tool has one important feature - it is quite selective, it can fight both annual and perennial weeds. At the same time, due to selectivity, the drug and its active components do not violate the root structure of cultivated plants at all, so they remain intact and safe. The principle of action consists in a combination of the following effective steps of this drug:

Weeds tend to draw out all useful microelements and components from soil and water in their usual conditions, thereby preventing cultivated plants from saturating them.When processing the soil with the drug, all useful substances are obtained only by crops, but the weeds begin to die off very quickly, which is a huge advantage. 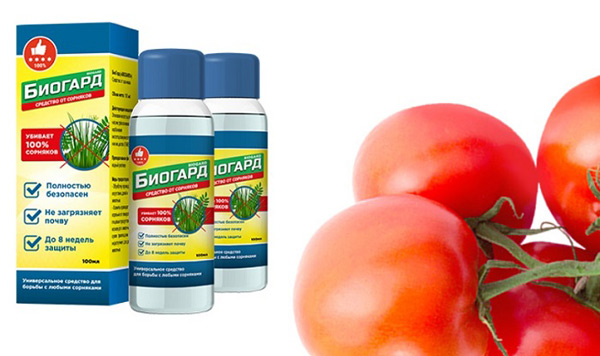 Components of the preparation and composition of Biogard

Among the main components, we can single out the following, especially significant:

Safety of the drug Biogard

As we have already noted, the product is completely harmless to the crop, and also does not pose any danger to human life and health. This is possible due to the selectivity of the drug in relation to what to act on, which weeds to destroy.

The tool is able to rid the site of weeds in the shortest possible time, and also has an extremely positive effect on garden and agricultural crops, no matter what species or genus they belong to. Biogard contains only natural ingredients, therefore, if you follow the instructions for use, then in general you can only improve the ecological situation. As we have already mentioned several times, let's say it again: the drug is safe for humans, and also does not harm the quality of the plant and its fruits.

Instructions for use of the drug can be found on absolutely any package of the drug, as well as the method of application. The manufacturer Biogard emphasizes that only with the correct application will it be possible to notice the results, and after the shortest possible period of time. The standard usage scheme includes several basic steps.

Firstly, the new bio-herbicide biogard must be diluted with ordinary water. standard calculation - three liters of water will require 25 milliliters of the drug. Secondly, the resulting solution, which is very thoroughly mixed, is watered over the plants, which are especially overgrown with weeds.In order to enhance the flowering processes and, accordingly, fruiting, you can also spray the plant with the same solution, diluted in exactly the same proportions.
As for the container in which the drug is diluted, this does not really matter - you can take both metal dishes and plastic buckets. The product is completely safe for human life, but when spraying, you can use a mask and glasses to protect the mucous membranes from getting the drug on them.

As for the indications and contraindications, we have already indicated on the first point: the agent is necessary for the control and destruction of weeds, in order to increase the productivity of horticultural and agricultural crops. Genus, variety of culture, its type has absolutely no value. Contraindications, as a rule, are not detected, but you should still work with the drug in additional protection so that its components do not get on the human mucous membranes. Thus, we examined the characteristics of perhaps the most popular drug in recent years. You can buy it directly through a distributor, but you will hardly be able to find it in stores. There is some downside to this, but the drug is still worth the effort.

How to feed pepper seedlings: valuable rules and tips 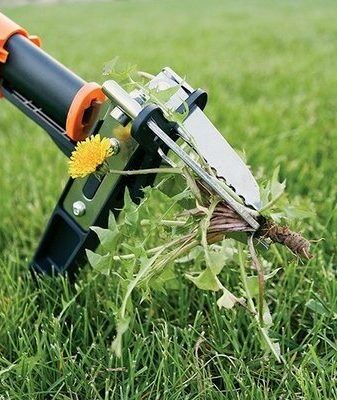 Hurricane Forte from weeds: instructions for use
Features of the drug and the use of the herbicide hurricane forte Hurricane Forte, like many ... 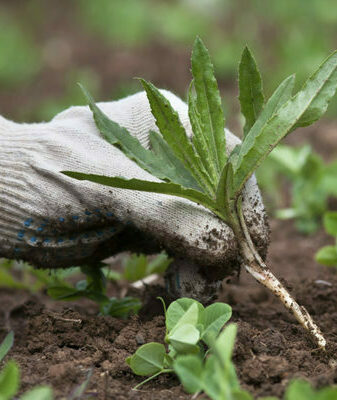 How to get rid of weeds and grass forever
Any summer resident will call weed grass one of the most annoying pests on the site and everyone ... 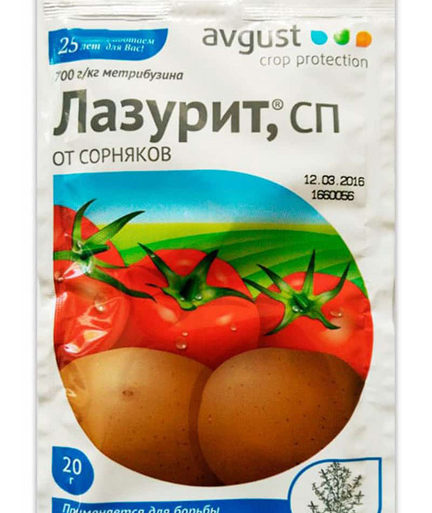 Lapis lazuli from weeds on potatoes: instructions for use
To save crops from weeds, herbicides were created. For potatoes and some ...
×